Though it’s thought of mainly as a British motorcycle company, a German immigrant named Siegfried Bettmann who started Triumph initially under his name as a bicycle (and sewing machine) distributor in 1883. Soon renamed Triumph (with help from Dunlop Tyre), the company pivoted to manufacturing its own products, and soon the first bikes rolled off the line in 1898. The first Triumph motorcycle, essentially a Triumph bike with an engine mounted to it, rolled off the line in 1902. It was World War I that kicked things into high gear for the company, with tens of thousands of their “Trusty Triumph” Model H Roadster cycles in use by the Allied forces. The company also briefly produced a line of cars like the Super 9 Touring Car and the Gloria Southern Cross, though the Great Depression and heavy competition helped end those efforts. The ’30s weren’t much more pleasant on the cycle side, either—a variety of spinoffs fractured the company, although Triumph did manage to release the 500cc 5T Triumph Speed Twin in the late ’30s, with the model finding popularity as a racing bike just before the onset of WWII. After their original Coventry factory was destroyed in a bombing blitz, it relocated to nearby Meriden and produced bikes throughout the conflict. Following the war, Triumph saw ever-increasing attention from the American market for its motorcycles, which spiked in 1953 when Marlon Brando rode his personal Thunderbird in the famed biker movie The Wild One. Other famous Triumph riders included James Dean and Steve McQueen’s legendary ride on a Triumph TR6 Trophy in The Great Escape. The company introduced its popular Bonneville in 1959, and continued to be popular through the ’60s and ’70s thanks to ease of customization and success on the race circuit. Triumphs were reborn once again in 1983 when the brand was purchased out of bankruptcy and revived with a series of Tridents, Trophies and Daytonas in 1990. The popular Speed Triple hit the street in 1994 and bikes were once again being sold to America in 1995. Most recently Triumph rolled out the Rocket 3 which at the time boasted the biggest, strongest engine on a production motorcycle, clocking in at a massive 2438cc. 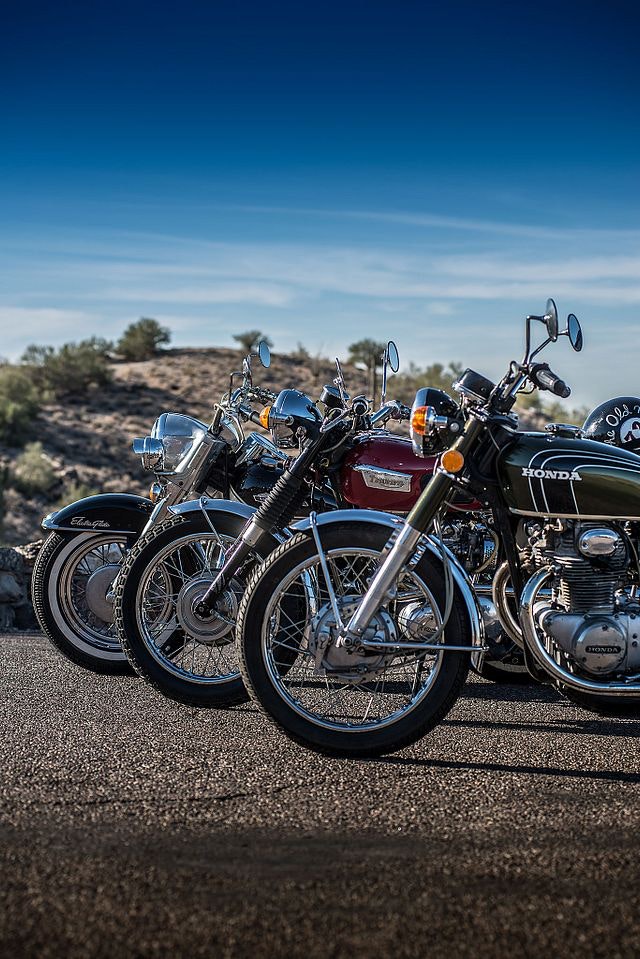 X75 Hurricane
Back to Make