Launched in 1897 as the Olds Motor Vehicle Company, Oldsmobile was the oldest American car company before GM shuttered the brand more than a century later. Before closing, Oldsmobile sold some 35 million vehicles, developed some amazing (and highly collectible) cars, and revolutionized how cars are built along the way. While Henry Ford gets the historical credit for its popularization and streamlining, it was actually founder Ransom Olds who created the first assembly line at his factory in Lansing, Michigan. Not only is it credited with creating one of the first true muscle cars, Oldsmobile is directly connected to the birth of rock n’ roll — the 1951 song “Rocket 88” named for the recently-introduced V-8 powered coupe that quickly became dominant on the NASCAR scene. Other notable Oldsmobiles include the Cutlass (at one point the best-selling car in America), the Delta 88, the Toronado (one of the first modern front-wheel-drive vehicles) and the Vista Cruiser, a station wagon known for its striking split skylights. As one of GM’s mid-tier brands, Oldsmobile was squeezed on both sides by more affordable imports and more accessible luxury vehicles, and despite valiant efforts to hold the market with cars like the Aurora, Bravada and Intrigue, Olds was finally brought to an end when the final vehicle — an Alero — rolled off the line in 2004. 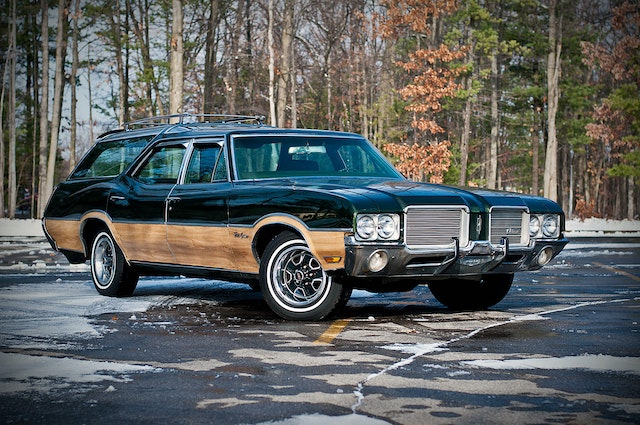 Vista Cruiser
Back to Make