There’s just something about those old luxury cars. Cadillac. Lincoln. Buick Electra. Chrysler New Yorker. Those of you who’ve been reading my old car posts for a while can generally predict that I’ll probably be going on about some 1960s–’80s U.S. luxury sedan or coupe that most people under 30 will not recognize, nor care about. But despite their giant stature, their incredible thirst for fuel and their sometimes less than exemplary build quality, they had style. Presence. Not to mention ample interior and exterior colors, several different upholstery and fabric choices and things you will never see on a new car, like whitewall tires, fender skirts, or opera lamps. Or painted Naples Yellow with matching landau vinyl roof and leather interior, as on today’s subject.

I freely admit I am somewhat of an anomaly. When I first got my driver’s license, way back in September 1997, I followed my parents’ lead and drove Volvos for nearly two decades. Then, at age 33, I bought my first Lincoln Town Car. At age 35, I traded my final Volvo for a second Lincoln Town Car. And have been driving them ever since. Sure, I still like Volvos. My parents still have one, and my brother recently got a new S60 that is an extremely nice sedan. I like lots of other kinds of cars too. And yet …these relics of another decade compel me … to drooling and frantic picture taking, primarily, whenever I spot one at a show or parked on the street.

This infatuation goes way, way back. As a kid, my three favorite toy cars were a Matchbox Mercury Cougar Villager, and Continental Mark IV and Cadillac Fleetwood Brougham by Pocket Cars/Tomica. As a “yoot” (as Joe Pesci pronounced it in My Cousin Vinny), I was more interested in the Cadillac Fleetwoods and Lincoln limousines that Thomas Magnum or Michael Knight were chasing than the 308 GTS  or Trans Am they were driving. The bad guys just seemed to have the cooler cars! Well, most of the time.  It is not a coincidence that one of my favorite 1970s detective shows was Cannon. Of course, he drove a Continental Mark III, which he later traded for a Continental Mark IV.

In 1977, all Cadillacs (save the the Eldorado and Seville) changed dramatically. In fact, all of the B- and C-body GM cars were downsized, from Caprice Classic to Bonneville to Fleetwood Brougham. And despite the huge makeover, they still looked great, thanks to GM Styling boss Bill Mitchell’s “sheer look.”

They were damn good looking. Despite the rapid weight loss plan, the 1977 Caddys were still very attractive, and as luxurious as any of the Nimitz-class 1971-76 Cadillacs. And with the 425 CID V8 under the hood, they still had plenty of oomph with their lighter bodies. While it was true that very few Coupe de Villes or Fleetwood Brougham d’Elegances went to gymkhanas out at the airport, they would most certainly giddy up when you floored that chrome-trimmed go-pedal.

Folks trading in their 1974 Coupe de Villes or ’72 Sedan de Villes on one of these would have found a not unfamiliar environment, with Sierra grain leather as far as the eye could see, though cloth or velour interior was still the standard interior trim, depending on the model. Automatic climate control, and power everything-windows, mirrors, door locks. Twilight Sentinel, cassette or 8-track stereos, an available power Astroroof, and other assorted lux goodies were all on offer.

After all, these were Cadillacs. Though even a zero-option Sedan or Coupe de Ville was a very nice car to drive, most went out the door with plenty of extras. The Cadillac name still had cachet in the late ’70s, and it just wouldn’t do to arrive at the country club in a de Ville with standard wheel covers and no vinyl roof. Heavens to Betsy, no! “And we thought Howard was doing so well …”

And this was no lame “just the seats and a business-size-envelope-sized contrasting trim panel” yellow on the doors, with everything else black or gray like on a modern car. No, this was a YELLOW interior. The dash, headliner, pillar trim, steering wheel, and even the gear shift knob for the Turbo-Hydramatic were all color-keyed. And the seat belts!

While all the trim and details are somewhat lacking compared to Cadillacs of the 1950s and ’60s, I still like the interiors of these cars very much. Sure, there was a lot less metal and a lot more plastic inside than say, on a 1964 Sedan de Ville, but it was still nicely designed and finished. And safety standards, as now, as ever, aren’t frozen in time. GM, like everyone else, had to adapt to the standards of the time.

I’ve always loved these door panels. They looked so cool at night, with the red-and-white courtesy lamp with Cadillac crest glowing. There was still plenty of Cadillac attention to detail too: Full-length armrests, door assist strap, plenty of wood-grained trim, plus chrome door release, door lock, and power window controls. Yes, the wood was fake, but it looked good.

The back seat was equally nice, with real space for real adult human beings. While these cars were definitely smaller than the 1976 model, interior space was just as good—and in some cases, actually better. These were still true six-passenger motor cars. And the back seat passengers received their own lighted ash tray and lighter. Heck, it was the ’70s. Everybody smoked! They were like cup holders in the ’90s. Or smartphone slots and receptacles on new cars.

This one was spotted on the electronic bay several years back. There was a time not so long ago when you could pick these up for a song. And while you could still probably find a decent example for decent money today, they are definitely not the $500 used cars they used to be. And exceptionally nice ones with low mileage like the featured car go for good money. This one sold for $14,100 in 2014. Not bad.

Many may grouse about spending that on a ’70s car, even a nice one, but that’s still substantially cheaper than a brand new bare-bones compact sedan. And let’s face it, even the current crop of luxury cars don’t have the chrome, trim, color options, and sheer Broughamtastic presence of a motor vehicle such as this. 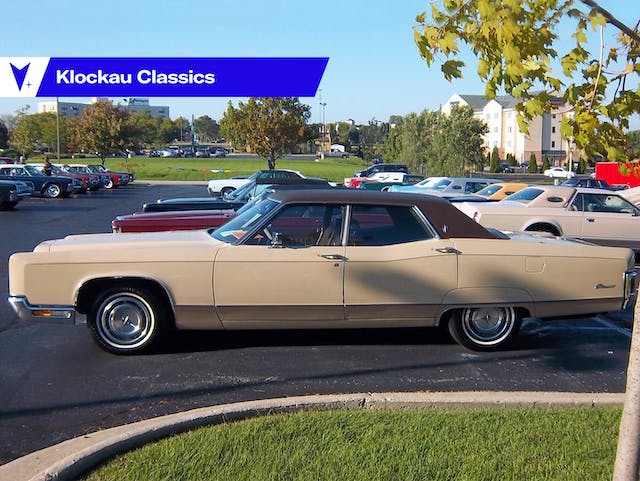