Jim Hackett will be retiring from his role as President and CEO of Ford Motor Company, to be replaced by current COO Jim Farley, effective October 1.

Hackett joined Ford’s board of directors in 2013, before stepping up to President and CEO of the company in May 2017. Prior to Ford he was the CEO of Steelcase, a Grand Rapids, Michigan-based office furniture company, for nearly twenty years.

At Ford, Hackett was charged with transforming the company and getting it ready for a faster, more agile future. “I asked Jim to help modernize Ford,” said Chairman Bill Ford in a media conference call this morning. Under Hackett, Ford cut unprofitable model lines and doubled down in spaces where the company saw profitable opportunities. That meant the elimination of all passenger cars in the U.S. market and the introduction of more crossovers and SUVs. “We’re a very different company than we were three years ago,” remarked Ford.

In hiring an outsider, Ford hoped to bring in fresh perspectives on matters fraught with the bureaucracy that characterizes a century-plus old company. “I was going to come at the business different than others had, coming from outside the industry,” remarked Hackett on the call.

Hackett brought design-thinking with him from Steelcase, aimed at focusing on the end user and thinking first and foremost about the products intended targets. With that, he was bringing the type of mindset that seems to exist in the agile companies that have the darling eye of Wall Street currently. “I aimed for moving ahead vs. just moving fast,” said Hackett. The changes and culture that he set about instilling in Ford didn’t go without raised eyebrows from skeptics. “I knew that we’d test the patience of our stakeholders.” 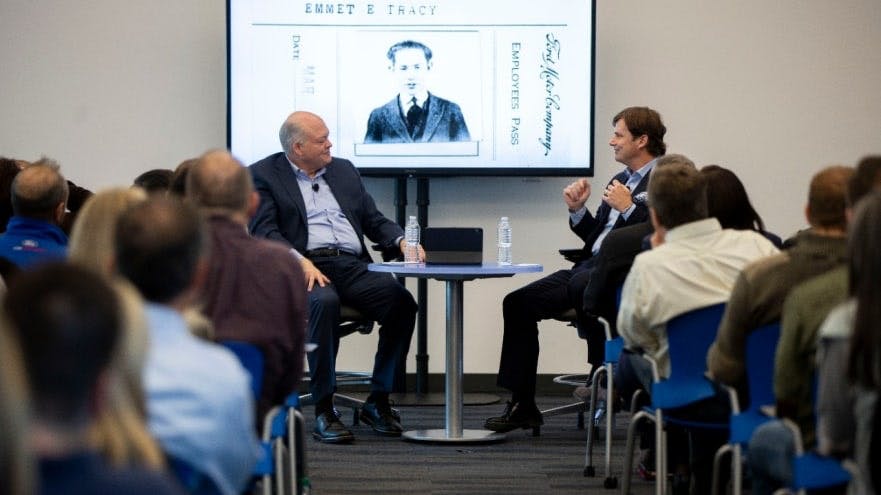 From the first day that Hackett assumed the leadership role, he was tasked with finding his own successor. Jim Farley came to Ford from Toyota 13 years ago, and has held various roles at the company since arriving in Dearborn. Hackett eyed Farley as his successor right away, and in the three years of Hackett’s tenure, Farley held various leadership roles in different parts of the business, a move that was almost certainly a grooming regimen of sorts for when Farley would take over the CEO position.

According to Stephanie Brinley, a principal automotive analyst for IHS Markit, the move makes sense and was always part of the plan with Hackett’s tenure:

“The succession from Jim Hackett to Jim Farley is designed to be smooth, with Farley’s direct involvement in strategic changes for the company over the past several years and the overlap between the announcement and the date the change officially takes effect. There is likely to be little internal strife over the change, though we may continue to see some changes as Farley takes the helm. Transitioning to a new CEO was meant to be Hackett’s endgame at Ford; his role was to create change and position the company for longer-term success under a different leader, not necessarily to be the one to execute.”

The leadership shuffle comes at perhaps the most pivotal point in time for the company in recent memory. Farley was only recently promoted to the COO position following a rocky launch of the new Explorer SUV that saw then COO Joe Hinrichs ousted from the company. As Ford prepares to introduce arguably the three most important products to date—the new 2021 F-150 pickup, the all-electric Mustang Mach-E, and the off-road oriented Bronco, appointing the man who was tapped to help smooth out one launch seems a natural thing to do.

If Farley’s track record is anything to go on, the move should propel Ford further in what they feel is the right direction, according to Brinley. “Hackett’s assignment was provide course correction and to leave a Ford a company better able to deal with current and future industry disruptions, and Farley has been given and succeeded at a series of assignments, particularly in recent years, designed to ensure he is fully versed in traditional and modern elements of the business, prepared to not simply execute the current path but also to be able to pivot or alter to ensure success even when the external environment changes and some revision to strategic and operational plans needs to happen.”

No doubt, the new F-150, Mustang Mach-E, and Bronco are all at least in part the fruits of Hackett’s labors to transform Ford. Whether or not brand loyalists will welcome an electric crossover with a Mustang on it is another matter, but we’ll hold our tongue until the car is here and the sales figures are out. All that aside, the new Bronco looks as promising as ever—Ford has hinted that as many as 150,000 customers have placed their $100 deposit for a spot in line—and with Farley at the helm starting in the fall all eyes will be on Dearborn to see how he begins his tenure as the head honcho.

Get an insurance quote
A Story About
Share Leave comment
Read next Up next: The Jeffery/Nash Quad was the Army’s big 4WD upgrade over, well, mules