As I wrote in January, the house in Fitchburg, Massachusetts, whose five-car garage I’d been renting for years for $75 per month per space, was sold in early 2021. I became a month-to-month, at-will tenant, waiting for the other shoe to drop. And just after Thanksgiving, it did: I was asked to vacate one space by the end of December, and to be out of the other four by the end of March.

I didn’t like it, but at least it was a timetable that didn’t put the cars out in the dead of winter. I found inexpensive warehouse space in Monson, towed one car there shortly before the new year, and let the remaining four hunker down in Fitchburg over the winter. But as the calendar turned to spring, I was acutely aware that I had unfinished business.

Initially I thought I’d use the formerly-mouse-infested-truck to tow the other four cars the 62 miles from Fitchburg to Monson, but a combination of things made me take a different tack. Renting a U-Haul auto transport is appealing because it means I can do all the moving myself without having to coordinate schedules with anyone else, and the $60/day rental is short money, but with the price of diesel, the total outlay certainly wouldn’t be cheap. It also would make for two rather long days, as Fitchburg and Monson are further from each other than either is from my house in Newton, loading and unloading cars takes time, and picking up and dropping off the U-Haul transport lengthens the day.

So, for a number of reasons, I decided not to do the direct-Fitchburg-to-Monson thing that I did with the first car. Instead, with winter having apparently passed, March having pretty much done its out-like-a-lamb thing, snow turning to rain, and the salt largely rinsed off the roads, I thought I’d bring the cars to my house in Newton.

Why, exactly, would I do this when I don’t have room for all the cars at the house? (I mean, why do you think I’ve been renting all this garage space for all these years?)

The first reason was that the thing with the ticking clock on it was getting the cars out of Fitchburg. There was no similar time frame on getting the cars to the new space in Monson (I checked, and the guy who rents space in his warehouse said he had oodles of room now that the RVs and boats were leaving). By decoupling the trips to the two storage areas, it made things much more manageable. Doing the bribe-four-friends-with-pizza-and-beer thing would make for a great story, but then I’d have to coordinate schedules with four people. Fitchburg is only a 50-minute drive from Newton, making it so my wife Maire Anne could run me out there to grab a car and back in two hours. This way, she and I could move the cars when it was convenient for us.

The second reason had to do with my concerns about old gas. As I wrote about here, I’ve never used fuel additives in my winter-stored cars because I’ve never had a no-start or a rough-running event correlated with three- to six-month-old fuel. However, the ease of access to Fitchburg has meant that I drive the cars and run fuel through them, so three to six months has never turned into six months to a year. With Monson being further than Fitchburg, and with it being a warehouse for which I need to coordinate access instead of Fitchburg’s individual roll-up doors, I had to admit there was possibility that the cars might sit for longer than they have in the past. So the idea of towing the cars from Storage A and simply dropping them off, full of over-wintered gas, at Storage B, for what could be months of sitting, didn’t seem like the smartest move. Instead, driving the cars, burning a good share of the old gas, and filling them with fresh gas and a shot of fuel stabilizer seemed a better play.

The third reason was that I own these cars because I love them, and a big part of that love involves driving them. It’s not only good for me, it’s good for the cars. Plus, by driving them, it refreshes my memory as to what they need. And it’s also an opportunity to assess. Maybe this one should stay at the house for a bit so I can do such-and-such to it. And this one, you know, is really very similar to this other one. I don’t really need both. Maybe I should help this storage situation by moving it along to another owner. (Hypothetically, of course.)

And that brings us to the last reason to bring the cars home: It allows me to look my own excesses squarely in the face. With the cars distributed between different storage areas, it’s easy to forget how many of them there really are. Getting all 13 of the annual auto excise tax bills the same day is a good reminder. But you know what’s an even better reminder? Having them all at the house at the same time when they don’t all fit in the driveway and thus spill out into the street.

So that’s what we did—we brought the four cars in Fitchburg home. And really, thanks mostly to my eternally good-natured wife, it was easy. I watched the weather and waited for a good hard rain to wash most of the winter salt off the roads. Then Maire Anne drove me out to Fitchburg twice in a day. I first drove the 1999 BMW M Coupe (“the clownshoe”) home, then Bertha, the former track rat ’75 2002 I sold to my friend Alex in 1988 and bought back and resurrected a few years ago.

A few days later, to knock the remaining two cars off in one trip, Maire Anne drove my friend Alex and I out to Fitchburg. Alex took the ’72 Bavaria, and I drove the ’79 Euro 635CSi.

And so, with that, after eight years, the Fitchburg era officially came to an end. It was a good run.

If the intent in doing this was to confront my own excesses, it was spectacularly successful. Twelve cars (all of them except Hampton the 49,000-mile ’73 BMW 2002, which I moved to Monson in December) is an insane number to have at the house. I figured out that, with the 1973 BMW 3.0CSi on the mid-rise lift, if I put the nose of the Lotus as far under it as it’ll go, leave the garage door open, and array the cars nose-to-tail, it makes enough room to be able to fit an extra car in the driveway. That, combined with parking two cars on the sidewalk in front of my house (I’m the next-to-last house on a dead-end street), makes it work, sort of, except on trash pick-up day. A short video of this chaos can be seen here.

Starting and driving the cars also instantly generated a punch list. The choke on one of the Bavaria’s Weber 32/36s stuck open, making starting and warmup a bit rocky. Alex said the car buffeted and hesitated at even throttle, a problem I’d forgotten about. The 635CSi has an annoying rattle from the mirror and still has the heater disconnected from a road-trip kluge I did last September. The clownshoe’s wheels and tires feel badly out of balance, and there’s no sense doing anything about it without replacing the car’s embarrassingly old tires. Bertha the 2002 feels a little down on power, likely due to the jetting in her twin Weber 40DCOEs never having been tweaked since I installed them 35 years ago.

So, after stressing out for months about whether I’d lose the spaces in Fitchburg, then learning that I would lose them and stressing out as the clock ran down on March, then stressing out about the exact logistics of getting the cars to their new home in Monson, the unexpected move of bringing four of the five cars back to the house has already had benefits. The stress is gone, as it often is when something you dreaded happens and it wasn’t nearly as bad as you thought.

Ideally, of course, all of these cars should be kept out of the weather—that’s one of the big reasons I’ve been paying all these years for storage—so most or all of the additional cars almost certainly will go to Monson, and that probably will happen via the bribe-four-friends-with-pizza-and-beer method, but it may not be for a few weeks. Of the four extra cars in the driveway, only the Bavaria’s rain exposure gives me pause, and even then, I’m not going to burst an aneurism if it’s in the driveway for a short period.

In the meantime, although the driveway is packed to the point of insanity, I can walk out the front door and choose between a ’74 Lotus Europa Twin Cam Special, five 1970s-era BMWs, a Z3, and an M Coupe without having to drive to a storage area and swap cars. Of course, to get at the one buried in the back of the garage, I need to move five cars from in front of it.

Hey, it’s not a “passion” if things aren’t a little bit out of control.

Rob Siegel’s new book, The Best of the Hack MechanicTM: 35 years of hacks, kluges, and assorted automotive mayhem, is available on Amazon. His other seven books are available here, or you can order personally inscribed copies through his website, www.robsiegel.com. 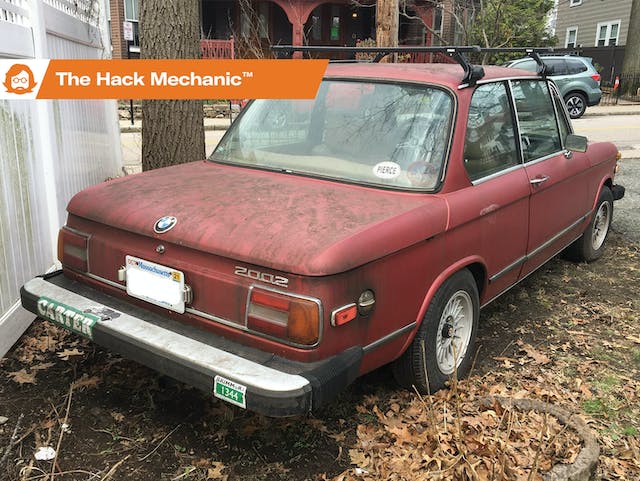 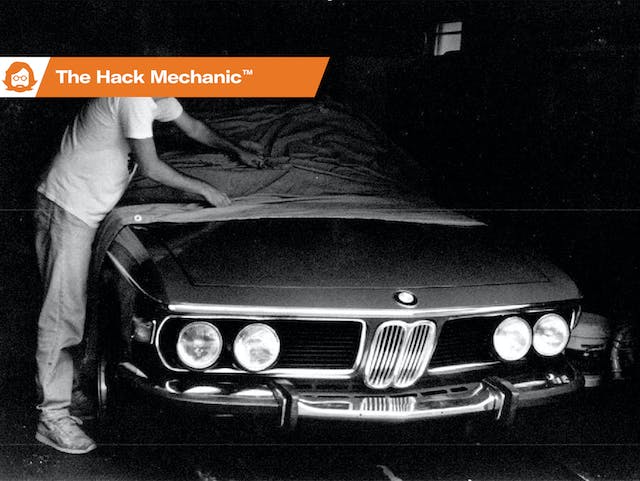 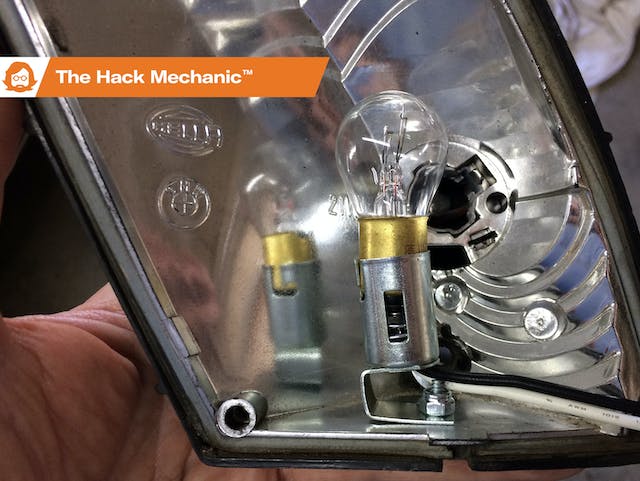 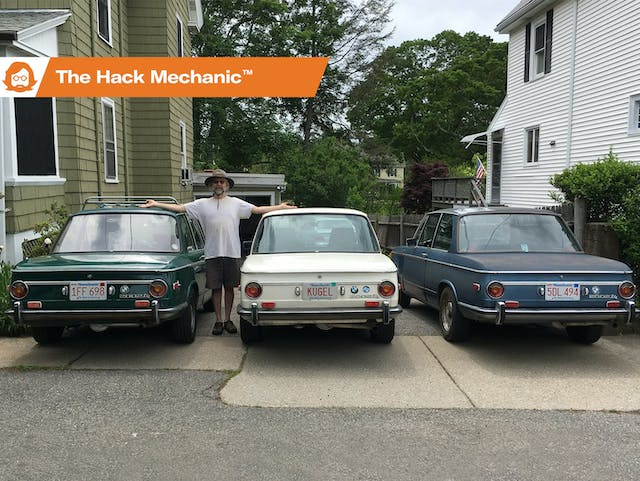