How I ended up getting hosed on The Big Road Trip, even after checking my hoses

Last week, I wrote about preparing to drive my 1979 Euro BMW 635CSi 2000 miles round trip to The Vintage, the annual BMW gathering in Asheville, North Carolina. Turns out there’s more to the story.

As I wrote, I found a badly abraded fuel hose and two heater hoses that were as soft as raw sausages and ballooning almost comically over their clamps. I had lengths of new fuel hoses in both correct sizes, so I replaced every rubber fuel line near the fuel pump. The heater hoses, though, aren’t carried at big box stores, nor are they next-day-delivery on Amazon. In fact, they’re on backorder from the dealer. I found a pair of new old stock hoses on eBay, ordered them knowing they wouldn’t arrive in time, scrounged a pair of used BMW 2002 close-enough-to-make-them-work heater hoses from the spare hose bin in my garage, inspected them, found them to be firm and without cracks or tears (they were certainly better than the water balloons that were waiting to explode in the car), and wrestled their incorrect bends into position.

As with replacing any coolant hose, I had to position a catch basin beneath the car to retain the coolant that poured out. This is often messy, as coolant sometimes bounces off other engine compartment components and misses the basin, but other than replacing a belt, this is about the simplest most straightforward repair you can perform on a car, and if you’re not willing to do it, you might as well turn in your DIY card.

Then, the night before leaving, I was hunting around in the garage for ignition spare parts, found a forgotten box of road spares for my 1970s six-cylinder BMWs, and was stunned to find inside it what appeared to be a pair of never-used heater hoses that fit the 635. Rather than immediately replacing the pair of used and kluged-into-fitting 2002 hoses with the never-used correct ones, I packed these NOS hoses as spares. It was an odd decision—driven, I suppose, by the number of things on my to-do list, as well as my not wanting to dump coolant again on the garage floor because my cats were out (antifreeze tastes sweet and is very poisonous to animals).

Speaking of road spares for a moment, unless I’ve recently replaced a water pump, I’ll typically travel with a spare. But if you think it through, if you really want to be in a position to install that water pump if the car dies in the middle of nowhere, you also need a gasket, adhesive, two gallons of pre-mixed coolant, and a catch basin. I used to relish being a self-reliant lone wolf and thus would pack all those items for a long road trip, but the safety-in-numbers thing really can’t be beat. Bob Sawtelle and Jose Rosario, the two guys I was about to travel with to The Vintage, saved my bacon three years ago when, while driving this same car to The Vintage in 2018, the cooling fan shattered, and I needed to remove its broken remains to keep driving. This requires pulling the radiator.

I set up shop in a convenience store parking lot while they ran to the nearest auto parts store and returned with antifreeze and a catch pan. For several reasons, this event will always stick in my mind. First, it demonstrates that, even though people like to run with me because I can fix cars by the side of the road, I am, in fact, just as likely to be the recipient of help as I am the giver of it. Second, it shows how, if you’re running with other people, you have options. You don’t need to travel with every part and every tool you might conceivably need (although for this trip, I did pack a gallon of antifreeze).

Three years after the cooling fan incident, I was off again with Bob and Jose. All three cars were running fine until we neared the point where I-78 hits I-81 in Pennsylvania. I noticed that the temperature gauge in my car was slowly creeping up. We had walkie talkies in the cars, and I radioed ahead that, no emergency, but I might need to find a rest area to check things out. Bob, who was driving a newer car with an external temperature sensor, radioed back, “Well, it is 90 degrees out.” I thought, yeah, maybe that’s all it is, coupled with the fact that we were routinely mashing the accelerator while passing trucks up the hills.

But the temperature gauge continued its slow but steady march northward. It passed 2/3, then 3/4. I radioed that I definitely needed to hit the first rest area or take the next exit. Then it hit 7/8. When the needle was on the last white mark before the red, I knew that this was the point where if you don’t stop, you’re likely to crack the straight six-cylinder engine’s aluminum head.

Well, more specifically, I shut the engine off (being careful not to lock the steering column), turned on the flashers, and coasted into the breakdown lane. Now, this was on I-78. It and I-81, which it feeds into, are two of the most heavily trucked routes in the country. While this sort of thing is what a breakdown lane is for, and while you see trucks pulled over and drivers executing roadside repairs all the time, I don’t have 53 feet of trailer behind me acting as a collapsible crash barrier. My long, low silver-with-black-stripes Euro 635CSi attracts a lot of attention, and there’s a tendency for people to unconsciously steer toward that which they’re staring at. I really wanted more buffer space than simply the breakdown lane. So, I looked for a wider area. Through a combination of coasting and turning the engine back on for five seconds at a time, I managed to find a grassy area to the right of the breakdown lane. My traveling companions pulled over along with me.

With this reasonable degree of safety, I opened the hood. I could see and hear steam hissing from the lower left side of the engine, but I couldn’t find an actual coolant leak. One of the heater hoses attaches to a metal pipe that runs under the intake manifold. My first thought was that the pipe had cracked or rusted through. If so, I thought this might require a tow.

I looked at my translucent coolant reservoir and saw that it was empty. I took the gallon of antifreeze out of the trunk and fed it into the reservoir. It swallowed the whole thing. I immediately realized that this may not have been the smartest thing to do (it was certain to all leak out, and I probably could’ve gotten the same result without pouring all of it in), but it did have the desired result—it quickly revealed the source of the leak. Coolant began spurting upward from the hose that attached to the metal pipe under the intake manifold.

Obviously, I was glad that I found the leak, and that it was in a hose for which I had a spare in my trunk, but I realized that the fact that I initially heard but did not see the leak was because the coolant level had dropped so low that there was no longer coolant, just pressure, in that hose, which almost certainly meant that coolant was no longer flowing through the head. I knew that I’d stopped before the temperature was “in the red,” but I really really hoped that I hadn’t cracked the head.

It was clear that I was going to need more coolant, so I asked Bob to find some while Jose stayed with me. I then undid the hose clamps and pulled off the popped heater hose. Fortunately, I’d brought both a pair of rubberized work gloves and a 6mm flex nut driver for the hose clamps, but it was still hot work, and I couldn’t wrap my hands around the metal pipe to hold the clamp for more than a few seconds at a time.

When I got the hose out, I could clearly see where it had failed. It had torn open a right-angle gash above the hose clamp indentation, though I couldn’t really tell if the root cause of the failure was because the old used 2002 hose had been weakened by the existing clamp indentation before I installed it, or if it was my new hose clamp and my bending and cajoling the hose into fitting my 635 that caused it to rip. In either case, in not replacing the used 2002 hoses with the new ones I’d found the night before I left, I’d clearly made a bad choice.

The next question was whether to also replace the other used 2002 heater hose. For two reasons, I elected not to. The first was that it’s the one that attaches to the back of the head, clearance there is tight, and my hands had already taken a beating from the heat. The other reason was that, for safety’s sake, I wanted to get out of there as quickly as possible.

Bob returned with the antifreeze. The car swallowed another gallon. I idled it for a few minutes by the side of I-78 and didn’t see any further leaks. We took the next exit and stopped at a convenience store for cold drinks (I was baked). I rechecked all the hose clamps and found that, in my haste to get off the highway, one of them was loose. I tightened it, and off we went.

Nothing else went wrong on the rest of the 2054-mile trip, and I haven’t seen any symptoms of a cracked head (dropping coolant level, sweet-smelling exhaust, oil or bubbles in the coolant, etc.).

Last week, regarding my replacing the ballooned heater hoses, I said, “If the 218,000-mile 635CSi dies on the trip to Asheville and back, at least it’ll be due to something else.” Obviously, I got that way wrong. I caused the failure. And if I ever have the pre-trip option to swap out a hastily installed set of used incorrect coolant hoses for new correct ones, yes, I’ll take it.

But I really need to think about the more subtle issue of reusing old coolant hoses. I certainly don’t routinely install them in my garage, but I often bring them on road trips as spares. It’s still difficult for me to see how, after finding the two likely original, likely 42-year-old pillowy soft heater hoses and learning that there was no way to order new ones and get them in time, I wouldn’t choose to replace them with other used hoses that felt firm and had no apparent visual defects. The answer may be as simple as admitting the possibility that, had I looked more closely at the hose that failed before I installed it, I might laugh at the “no apparent visual defect” part.

Denial has been admitted. We’re good. 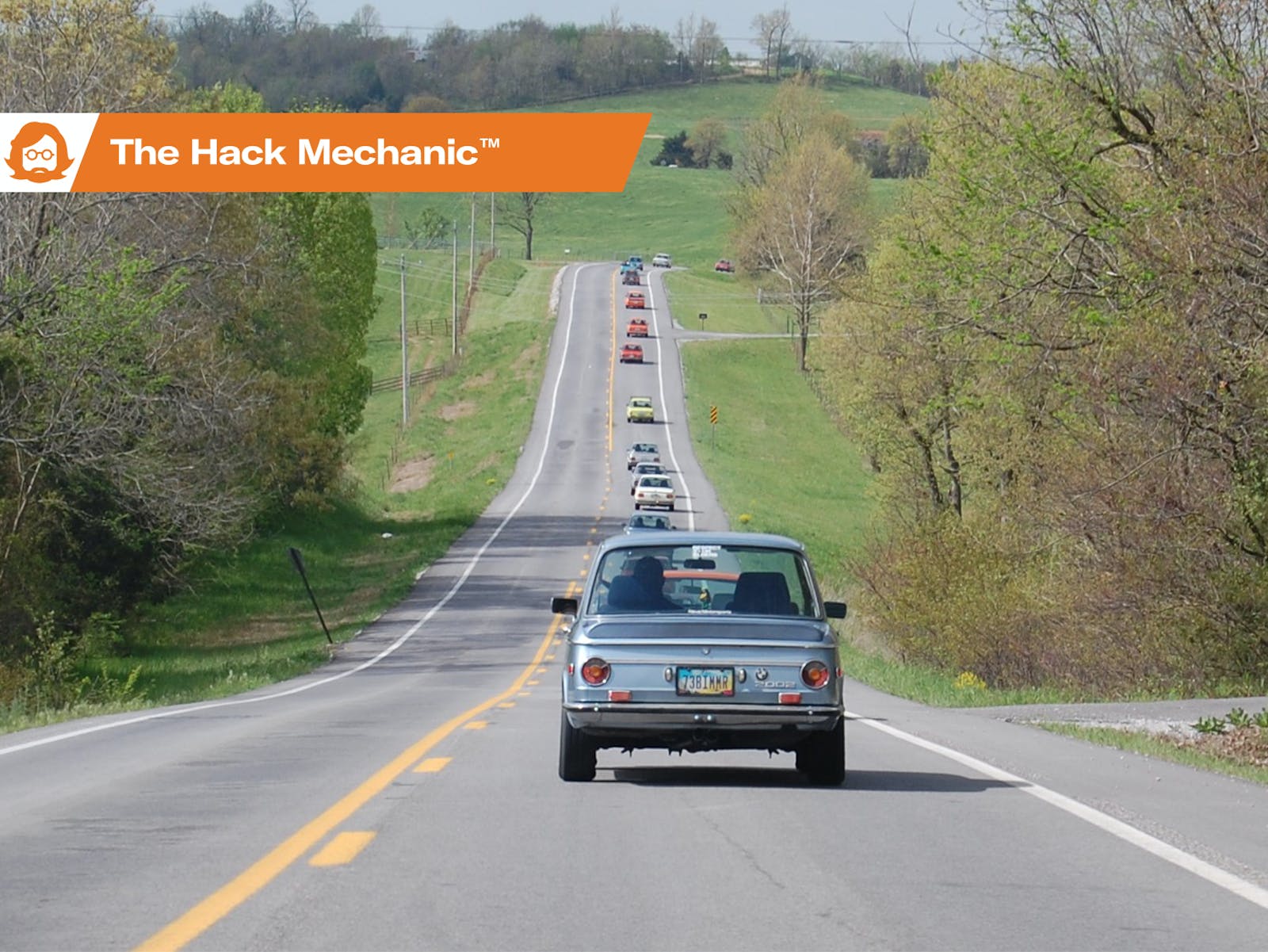 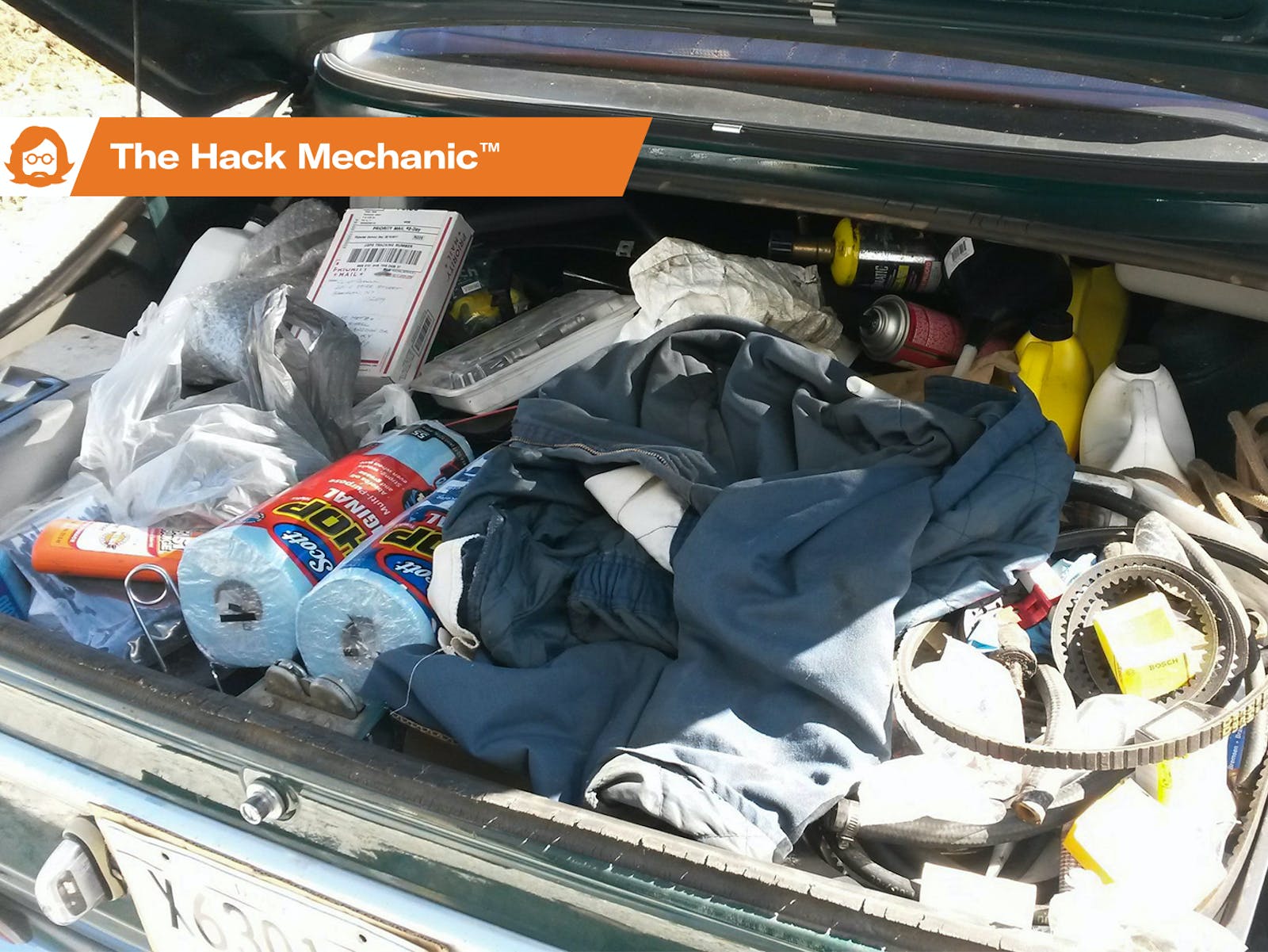 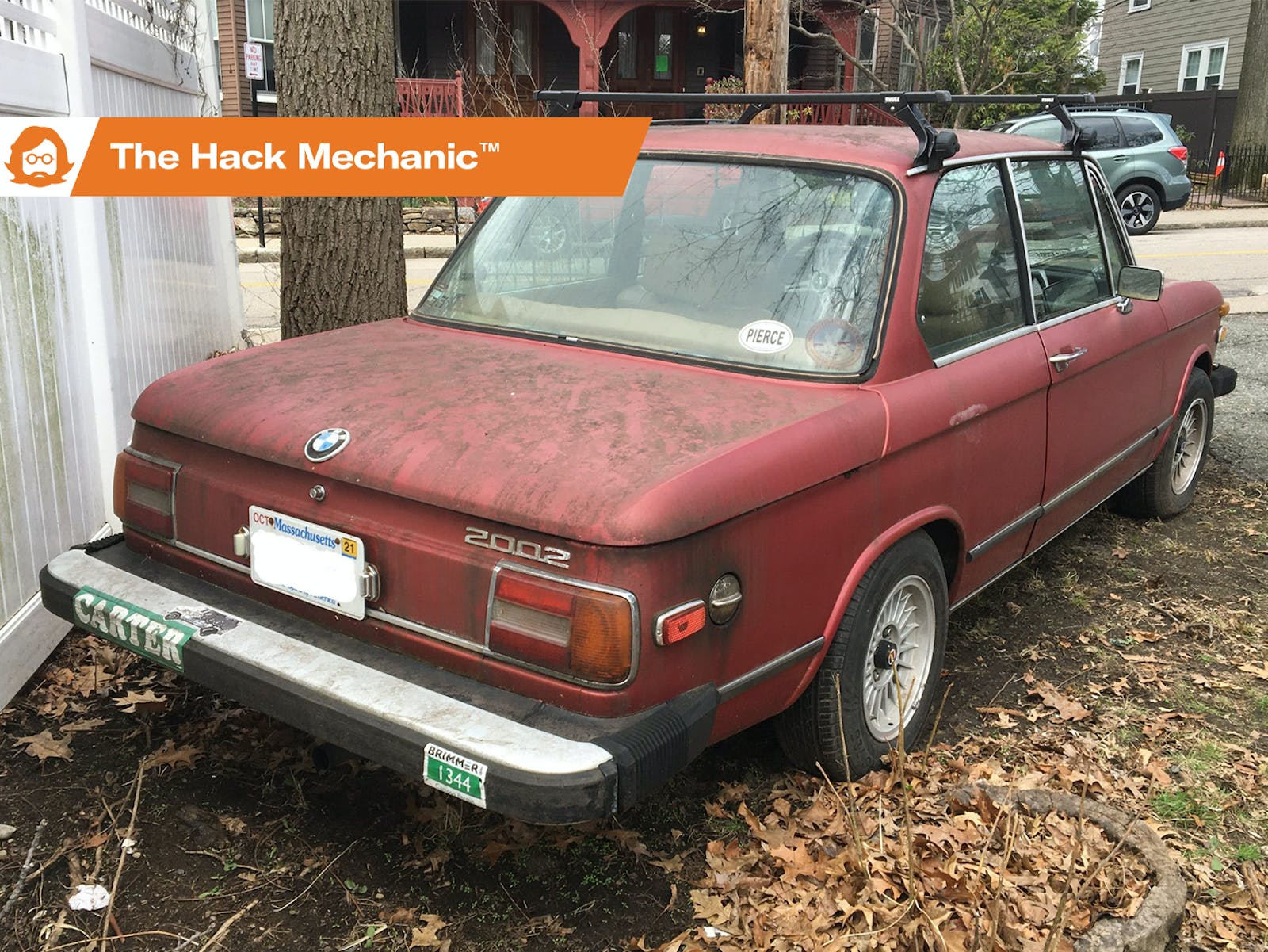 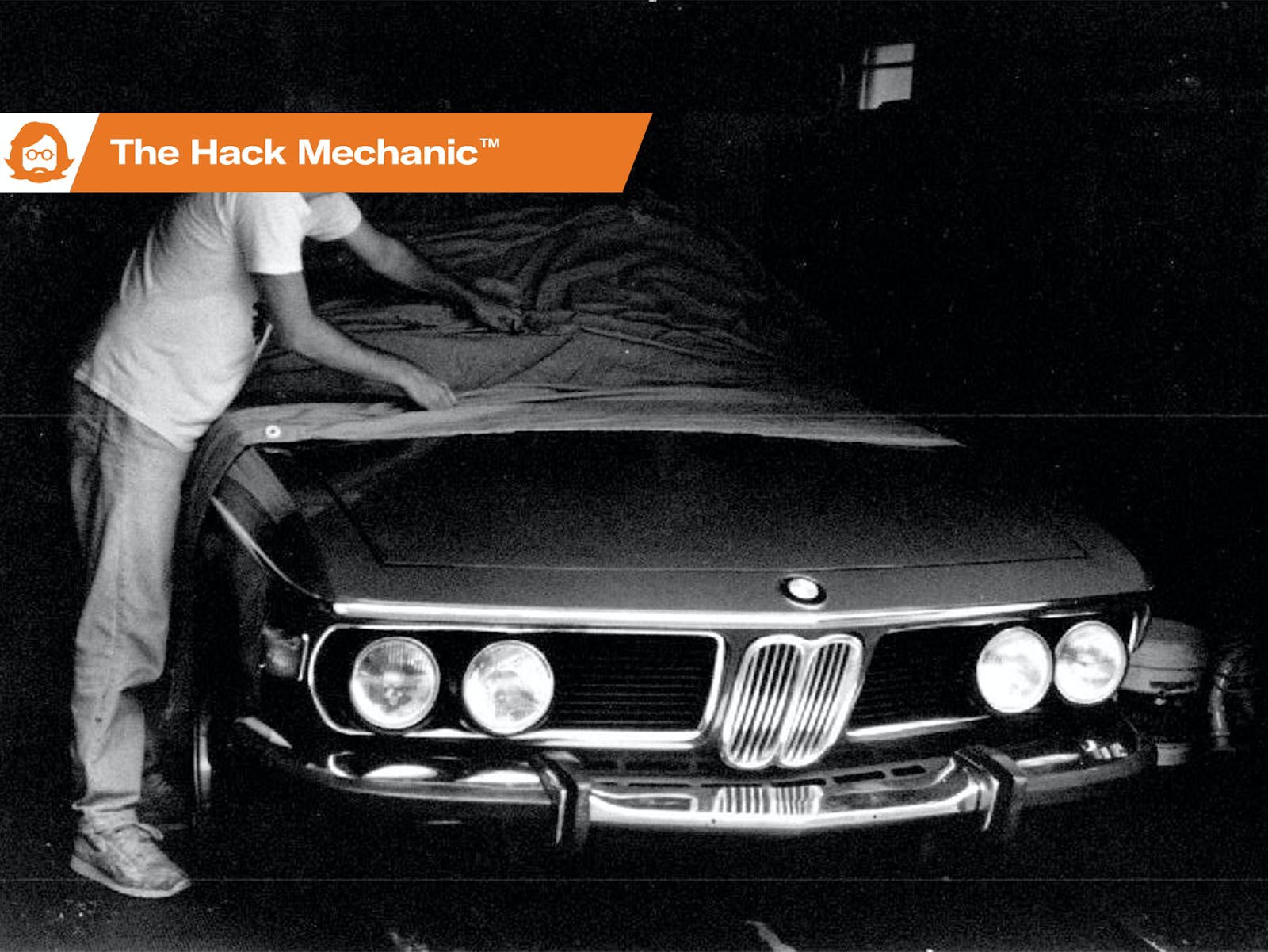 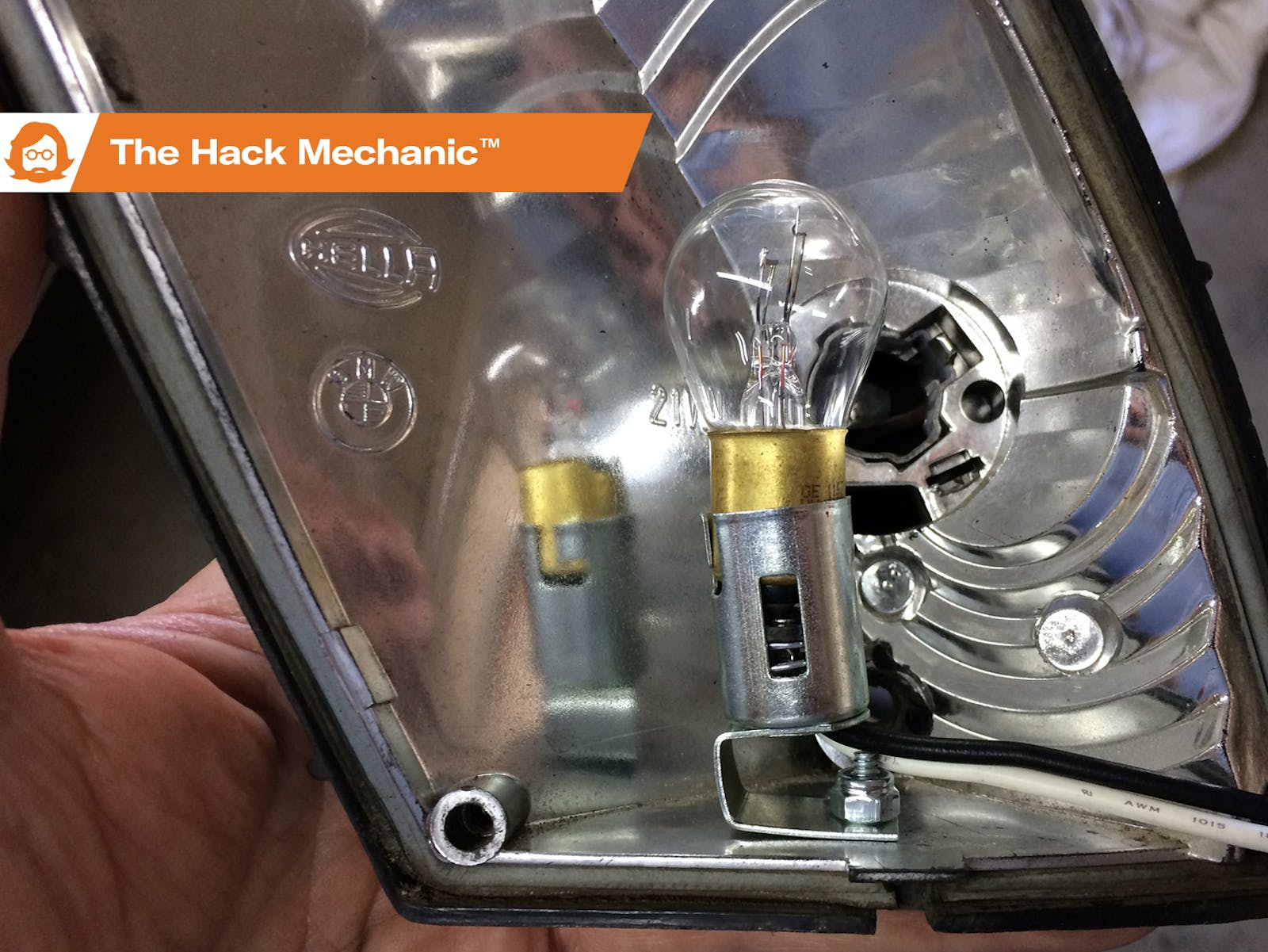