In 1970, Cadillac first offered a power sunroof on selected models. Up until that time, sunroofs on American cars had been rather limited in availability. After a small Cadillac run in the thirties, the option was limited to aftermarket converters. One of them, the firm eventually known as ASC (American Sunroof Corporation) provided Ford with a sunroof in 1960; it didn’t prove popular enough to continue, and the sunroof returned to post-sale conversion status until 1967, when the Cougar got one. In 1969, both Lincoln and Cadillac had small runs of factory sunroof options, with installation performed by ASC on a separate line, but in 1970 Cadillac went all-in on a power sunroof for several models.

1970 was a great year for Cadillac. 238,745 Cadillacs were built for the model year, setting a division record. Why not? They were attractive, comfortable, powerful. And the Cadillac name still had plenty of cachet.

The Coupe de Ville had a good year in particular, with 76,043 of the $5,884 luxocruisers built. But what’s a Cadillac without options? I’m sure many of them went out the door for seven grand and up.

For those who selected the sunroof, a switch was installed to the left of the steering column, just above the climate control panel. The automatic climate control was another pricey option, at $516, but it was a popular option. Other options included cruise control ($95), a rear window defogger ($26-37, depending on the model), Twilight Sentinel ($37) and leather upholstery ($156-184, again depending on the model). Cadillac advised its dealers to pair the six-way power seat with sunroofs, noting a slight decrease in available headroom that could be rectified by lowering the seat.

The featured car is painted in Sauterne metallic, paint code #64. I’ve seen many 1970 Cadillacs, in person and online, and had never seen this color before. With the matching vinyl roof and leather interior, it’s pretty sharp. There was a veritable cornucopia of color choices on 1970 Cadillacs. San Mateo Red. Byzantine Gold. Phantom Gray. Nottingham Green Firemist. Cinnamon Firemist. Chateau Mauve Firemist. It was truly a different time!

I’ve always loved the styling of the 1970 Cadillacs. While technically it was just a mild refreshing of the 1969 model, I think those minor revisions made it look even better. The bigger, veed taillights (although the lower lens was just a reflector, not a lamp), the new grille, the wheel covers, etc. Just pleasing lines and details, in your Brougham-obsessed author’s opinion.

The sunroof was a $626 option, a considerable sum when the least expensive Cadillac was the Calais two-door hardtop, at $5,637. Although you couldn’t get a Calais with the sunroof, as the Calais could not be equipped with a factory vinyl top and the vinyl top was a mandatory additional option.

Availability was limited to the Fleetwood Eldorado, De Ville series (as long as they had the required vinyl roof), and Fleetwood Brougham. Although not strictly required for the sunroof option, the Six-Way power seat was recommended by Cadillac.

Note: Special thanks to Dave Smith for providing the pictures. Some time back, I ran across two of the photos in this article on a Facebook post. As it turns out, Dave saved the online auction pics from back in 2015, prettied them up via Photoshop, and emailed them to me. Thank you, sir! 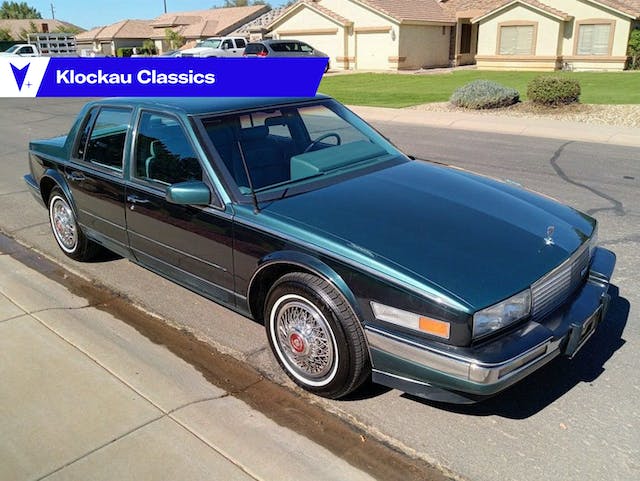