Your neighborhood can put on a great car show, but imagine the possibilities when you meet your car-savvy neighbors on a regular basis? I was fortunate enough to have a neighbor reach out, strike up a conversation, and become more than just someone you ask to collect your mail when you’re on vacation. Because for me, it only went downhill got better from there!

Sometimes you just need the right bait in your driveway, like a 1983 Ford Sierra Ghia finished in the chocolatey goodness known as Rio Brown. One day a gent named Brett drove out of his neighborhood and realized the Ford Sierra he read about online (before I joined Hagerty) was parked not too far from his house.

While the Sierra is still getting a period-correct 2.3-liter Turbo Ford powertrain swap, that’s a monumental discussion for another day …

The Ford Sierra’s saga moved Brett into my motoring sphere of influence, and now we’re both in the process of activating long standing plans for project cars. Brett is building a DF Goblin kit car, while I’m tending to my “bustleback” 1983 Continental Valentino restomod. Brett’s interest in the Goblin stems from his love of creating things, and the potential for thrills both on road and track.

My “Valentino” is a sentimental project (again, before I joined Hagerty) to save a slice of Mehta family history. His is a kit that’s been science’d out fully; mine is a Fox Body needing moderate effort/customization to accept period-correct Mustang 5.0 performance parts. The plan is to make a four-door version of the Lincoln Mark VII LSC, but with speedier aftermarket parts added to the mix.

Indeed, our projects have no connection other than their geographic proximity. But both were delivered to our respective garages on the back of a flatbed. And that isn’t necessarily a bad sign.

At this point in the restoration, the Valentino is a running and driving shell (there’s a short video of the stroker 5.0 running here) that “just” needs an interior restoration, new two-tone paint, and exterior trim refurb/replacement. Brett’s Goblin started life with the delivery of the crème de la crème of donor cars: the turbocharged Chevrolet Cobalt SS with Brembo brakes and a limited slip differential.

Yes, you could use a base Cobalt for a Goblin, but going whole-hog in the land of Cobaltsville is an affordable proposition. Brett’s example came via Copart auction, spending $2400 (including all auction fees and towing) for this spiciest foundation delivered to his driveway.  But since he has two other cars and hobbies that keep the tools in his garage busy, the Cobalt needed to be mobile.

And now it runs and drives!  Thanks to a few hours and about $100 at the junkyard, Brett sourced a replacement rear axle from a baseline Cobalt. Seeing it sit correctly made us both feel it was a shame to write this SS off, because it was clearly loved right until the very end. Even worse, this Cobalt still had the window sticker folded up in the glove box!

But that’s how the world works, as Cobalt SS’s aren’t valuable enough to merit the effort of a restoration, much less the stigma of a rebuilt title in the state of Texas.

So when the time was right, Brett got busy gutting the Cobalt SS. There’s no doubt that Brett and his son (below) did a thorough job of stripping everything but the glass out of the Goblin’s donor. And yes, the unique SS trim bits are selling just as quickly as they are listed on Facebook Marketplace.

It’s wonderful to see a father teach his son the art of working on cars, and I’ve personally seen this young man grow over the years: if nothing else, he’s gonna be one heckuva hobbyist when he’s our age.  Good job, Dad.

Because the Cobalt’s front subframe becomes the back half of the Goblin’s chassis, getting one that hasn’t been terribly abused or neglected is crucial to a less painful project. So this lightly used, shockingly clean example will make a fine Goblin once bolted up to its new home.

But, unlike the bolt-in subframe, the Cobalt SS wiring must be trimmed to the Goblin’s bare minimum of needs. Calling it labor intensive is an understatement, but luckily DF Kit Car (i.e. the Goblin’s creator) offers a service to strip all the unnecessary bits out for a few hundred bucks.  That’s money well spent for working professionals like Brett. Even better, DF Kit Car is just a few hours drive from our Houston suburb.

The Cobalt SS went from rolling donor to stripped shell in less than a week. By the time you read this, this trailer will have transported the body to its final home: the cold, unrelenting grip of the junkyard’s crusher!

And what was I doing in my garage all this time? Sadly, I wasn’t nearly as productive.

Since the Valentino sat outside for years, then rested on a rotisserie while its underside was treated to a media blasting (soda media, not sand), the first matter has been to address the layers of dust, 20 years of dirt, and countless spots of mold and mildew that penetrated every crevice of its Fox Body sheetmetal. I’ve never washed a car with an abrasive pad before … there’s a first time for everything.

The Valentino’s interior is similarly nasty, though the leather still smells just like I remember and is still soft to the touch. Note where the glovebox normally resides, see the bright white panel with the black slashes? That’s a thick layer of soda dust, one of many actually. And the dash also has to come out so that I can replace the evaporator, mount the standalone 4R70W transmission control box, and integrate the “new” Ford EEC-IV engine computer into an interior designed to interface with the absolutely primitive EEC-III system.

The rear should be easier, except one of the seat belt bolts (which holds the rear seat) is impossible to remove without stripping the bolt.  I even recruited Brett and his welder; welding a nut to the top of the bolt didn’t work. When all else fails, get the Dremel and grind down the bolt!

With eye/ear protection in full effect, 45 minutes and one grinding bit later the Torx bolt became a nub small enough to release the seat belt.  In the photo above, what’s left of the Torx bolt easily clears the bracket while the affected seat belt still works fine, even with a fair bit of rash from all the effort.

It’s a shame this happens, but only you, me, and everyone on the internet knows about it. And the far smarter/stronger folks at my restoration shop will probably have no problem getting that nub out from the underside. (Or so they claim!) 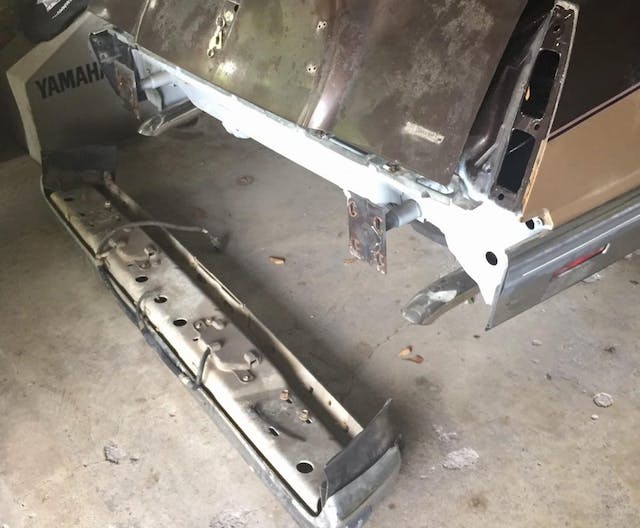 At some point, the entirety of the Valentino’s body shall match the exposed front end.  When that happens, it goes back to the restoration shop for the real hard work. But as it sits, stripped front end and all, the Valentino looks awesome with a fully exposed EFI Windsor V-8 stroker motor and uprated Fox Body suspension for everyone to see. Could almost be a Mustang, couldn’t it?

One of the bigger challenges now is the ability to find new old stock (NOS) for such an automotive oddball. Take this unique tape stripe for the Valentino’s signature exterior colors. Life would be easier if I could open a catalog and buy everything I needed, but where’s the fun in that?

That said, it’s been an interesting week in our neighborhood.  I will have more to share with you in the coming weeks and months, dear Hagerty reader!

Get an insurance quote
A Story About
Leave comment
Read next Up next: 6 odd things you should keep in your toolbox