General Motors is in on the cusp of a massive technological overhaul, recently declaring its intent to go all-electric by 2035. Building EVs is one thing, but convincing mainstream new-car shoppers—almost all electric novices—to buy in? That’s a whole different ballgame. Whether it’s access to charging infrastructure, cost, or longstanding attachment to internal combustion engines, there are a lot of obstacles standing in the way of widespread electrification. Fear of the unknown certainly plays a role.

Like most Americans, my electric car experience was limited to a golf cart. What better way to get familiar with the new wave of battery-powered transportation than to take up Chevrolet on its invitation test out the new 2022 Bolt EUV crossover?

The Bolt hatchback launched for the 2017 model year, becoming GM’s first all-electric car since the limited-run EV1 of the 1990s. Though the original Bolt had an impressive 238 miles of range and pleasant driving dynamics, the roughly $42,000 price before tax incentives was perhaps a bit steep. Chatter around the Bolt since its arrival hasn’t exactly been thunder and lightning; sales have steadily declined from 23,297 in 2017 down to 16,419 in 2019, but a promising 26 percent sales resurgence in 2020 (to 20,754 units sold) could be a sign of some momentum ahead of the Bolt’s mid-cycle refresh. This time around, Chevrolet is banking on a three-letter formula for success: E-U-V.

The EUV is a new Bolt variant, lifted up so that the all-electric hatchback presents more as a crossover. According to chief engineer Jesse Ortega, passionate consumer feedback from current Bolt EV owners was the motivation behind this addition, among other improvements.

“What [consumers] kept telling us was … refine the interior, refine the seats. They wanted adaptive cruise control across the range, but they were also looking for more SUV-inspired styling.” Back at the drawing board, Chevrolet dreamed up a Bolt EUV that was 0.2 inches taller, 0.2 inches wider, and 6.3 inches longer, with an additional three inches of legroom in the rear. The more “vertical” styling cues exaggerate the height, but the additional length (2.9 inches of additional wheelbase) is a game-changer.

Underpinning all three Bolt EUV trims (LT, Premier, and Launch Edition) is the same all-electric propulsion system from the outgoing Bolt hatchback. A 65-kWh lithium-ion battery pairs to a single-motor front drive unit capable of 200 hp and 266 lb-ft of torque. It dishes out plenty of right-away thrust with just a tap on the pedal, which is reassuring off the line in city traffic. For the standard Bolt hatchback, range is 259 miles—unchanged since the 2020 model that first benefitted from improved battery-cell energy density compared to the original lithium-ion pack. Naturally, the 90-pound heavier EUV loses a shade of range in comparison to its smaller sibling: 250 miles fully charged. As for all-wheel drive, it would both add cost and cut range given the current battery options.

The most important of the 2022 Bolt’s features, Super Cruise semi-autonomous driving, will only be available on the mid-tier Premier and top-spec Launch Edition. The Bolt EUV LT will start at $33,995 with destination fees (for context, the standard Bolt is $31,995). Premier pricing climbs to $38,495, and the Launch Edition settles at $43,495. Those prices are roughly $5000 less than last year’s new 2021 model, reflecting that there are (for now) no more federal tax incentives for GM EVs purchased after March 31, 2020.

More good news: All new Bolts, through the end of June 2021, include the option for free home installation of a Level 2 (240-volt) charging port. (The same plug now works for both 110-volt Level 1 and 240-volt Level 2 charging.) An at-home Level 2 charger is a must for would-be owners, and charging from fully-depleted to empty using this type of charger takes up to 7 hours. Using a public Level 3 DC fast charger, the Bolt EUV can add 95 miles of range in 30 minutes.

Inside, the EUV is noticeably more spacious than the standard Bolt. At six-foot-three, I’d feel a lot less guilt with a passenger behind me if they had the added 3 inches of legroom; salespeople should have no problem convincing people to chip in a little extra cash for the EUV’s added real estate. Rear cargo volume (with the seats up) is slightly higher in the standard Bolt EV, but once the seats drop the EUV has a considerable edge.

A new triangle-themed texture on the seats and dash does a decent job spicing up what was more flat and drab surfacing on the outgoing Bolt. Also new for 2022 is a revised gear selector with easy-to-use buttons replacing the traditional gear lever. The flushly integrated setup moves the cupholders back and into a more convenient location, while also freeing up the area under the touchscreen for phone storage.

What struck me first about driving my first EV is the comparative lack of familiar sensory cues. There’s no ignition noise or rumble when the Bolt turns on, just the gauges and touchscreen illuminating when you hit the glowing blue start button. No clunk into gear as you press the “D” button to engage drive, either. Torque arrives in a snap, confidently pushing the driver back into the seat in response to throttle pressure. At first I was a bit too heavy on the pedal, yielding a screech of protest from the front tires—not the noise I expected to hear from a car many of my Northern Michigan neighbors would probably consider wimpy.

This direct response from the Bolt’s powertrain encourages playful inputs, which feels strangely out of sync with gradual deceleration that the regenerative braking provides. Merging onto the interstate in the Bolt EUV was a cinch, with plenty of pep from the electric motor to get the little lifted crossover up to speed. The car’s reasonably small footprint and responsive throttle make passing and lane changing equally simple. One sore point: the HD Rear Vision Camera. It’s basically a live-feed rear-view mirror that works well and feels natural. However, if you flip the device to the traditional mirror view using the little tab mounted on the bottom, rear visibility suffers. If that camera were to become covered in snow or salt, the analog view isn’t ideal.

While the HD Rear Vision Camera is nice, Super Cruise is a much more impressive bit of technology. The semi-autonomous driving function works via LiDAR mapping that includes data on over 200,000 miles of major American and Canadian interstate. Super Cruise allows operators driving on the highway to go fully hands-free at the wheel with the push of a button, using the Bolt’s adaptive cruise control system to handle speed, deceleration and acceleration in response to changing traffic, and lane keeping. At first it’s fairly unsettling, but the system is so reassuring and precise that it quickly earns your trust. Super Cruise won’t engage until the vehicle is perfectly centered in the lane, and from there the system has no trouble maintaining that position. Using a steering column-mounted camera, the Bolt carefully monitors your eyes in order to assess attention levels, prompting you with visual and audio cues to take back control if your gaze wanders for too long. More than anything else, the weirdest part was not knowing what to do with my hands.

The Bolt EUV’s updated infotainment system is user-friendly for anyone with an elementary understanding of smartphones/Bluetooth pairing and is fully compatible with Apple CarPlay and Android Auto mirroring software. The 10.2-inch display scrolls fluidly, and even the farthest corners of the touchscreen are within reach from the driver’s seat. Just don’t look at it too long while Super Cruising, lest the friendly green light bar on the steering wheel turn red and angry.

After 20 or so miles of doing absolutely nothing behind the wheel of a car that was effectively driving itself, I conducted a series of unscientific tests. These included:

All of the scenarios above prompted the illuminated green bar to blink atop the wheel for roughly ten seconds. When the bar flashes red, you know you’ve done wrong and the car begins to slow down awaiting your inputs. This iteration of Super Cruise in the Bolt EUV is incapable of automatic lane changes, and when the driver takes over —say, to make a lane change—the green bar will change to blue.

Those intervening human controls bring out Super Cruise’s most annoying tendencies, because the machine loathes human imperfection. Too much sway to one side or the other will prompt the system to re-calibrate to a middle position in the center of the lane with a fair amount of force through the steering wheel. Bad human!

GM engineers insist that experience hours for drivers are what’s key to trusting the system. Confidence most certainly varies by user, but the real X factor that limits Super Cruise behavior is other drivers on the road. Unlike a human, Super Cruise can’t anticipate erratic driving—only react to it. If a human driver sees a car swerving in its lane, they will make sure to keep a lot of distance and tread lightly, while a computer can’t make those kind of judgement calls.

Given that the EUV Premier starts just north of $38,000, the optional Super Cruise software ($2200) pushes that price above the $40,000 mark. Even still, Chevy is packing its mainstream EV with a lot of impressive technology at a reasonable value. (Super Cruise will remain active for three years from the date of purchase, after which point it requires a $25 monthly subscription.)

Unfortunately, the Bolt’s biggest limiting factor isn’t technology or cost. Charging infrastructure across America is at the moment insufficient to make any EV the sole household vehicle for the average driver, so the Bolt will continue to attract buyers who already own an internal-combustion vehicle but want to supplement it with a city runabout. The trick is that owners have to plan anything outside of the usual commuting and errand-running around range and access to charging stations. There simply are not charging stations at every highway exit, although GM says it is partnering with EVgo to help triple the number of fast chargers nationwide with more than 2700 new units by the end of 2025.

If you’re still skeptical of EVs, consider giving them a shot. Even if the exercise is a matter of friends close/enemies closer, driving the Bolt makes the future seem a lot less scary. Silent operation, plenty of space, and a torquey motor are all appealing—even fun in the right circumstances. More than anything else, the Bolt is a cleverly designed people mover for serious commuters, and it doesn’t cost a fortune. If this is GM’s avant-garde of the EV revolution, a stronger charging network is about all the automaker should need to spark the fuse.

Highs: Fun in the corners, comfy on the highway, priced competitively.

Lows:  Restrained by virtue of charging limitations, Sport mode does virtually nothing, rear visibility suffers when HD camera is unavailable.

Sum-up: An urbanite’s best friend, the spacious Bolt EUV lets you enjoy the ride with hands on or off. 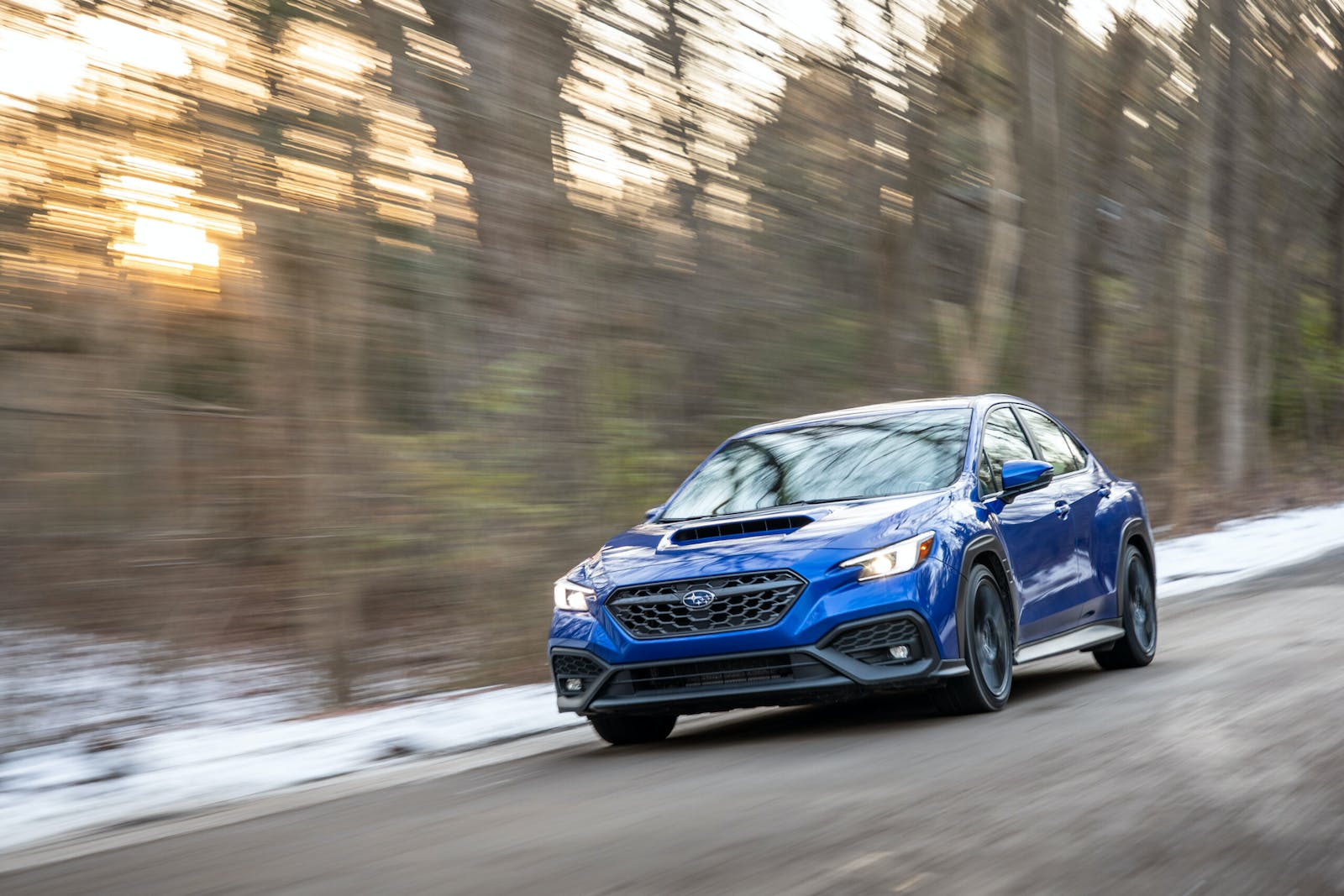 Get an insurance quote
A Story About
Leave comment
Read next Up next: A Ford Escort reborn, the MST Mk2 is a little red devil