General Motors announced today that it plans to be carbon neutral by 2040 and that it will “eliminate tailpipe emissions from new light-duty vehicles by 2035.” Spearheading that goal is the introduction of 30 all-electric models over the next five years, along with a commitment to invest $27 billion in electric and autonomous vehicles over the same time.

That 2035 goal isn’t going to be achieved all at once, of course. Chevrolet is currently cooking up two versions of the Bolt, the company’s first mainstream electric-only vehicle that came decades after the limited-market, lease-only EV1. GM as a whole is in the midst of a technological revolution, as its Ultium battery and the new platform that underpins its new full-size electric vehicles will be coming to market soon. The first onslaught of these new all-electric, Ultium-powered vehicles will include the GMC Hummer EV that’s landing later this year, with Cadillac’s Lyriq crossover coming in 2022.

Those aforementioned trucks and crossovers are part of the 30 models that are planned to make up 40 percent of GM products in the United States by the end of 2025. The EV roster will include crossovers, trucks, and even a rare vehicle configuration called, wait, let’s just make sure this is correct . . . a sedan?

While the switch to electric vehicles will eliminate tailpipe emissions and make headway toward the automaker’s professed goal of carbon neutrality, GM will offset the carbon output of its factories and suppliers by continuing to source renewable energy and also by using carbon credits. GM’s initial goal of sourcing 100 percent of its power from renewable sources both in the United States and around the globe has accelerated, with target dates five years sooner—2035 globally and 2030 in the U.S.—than previously announced. 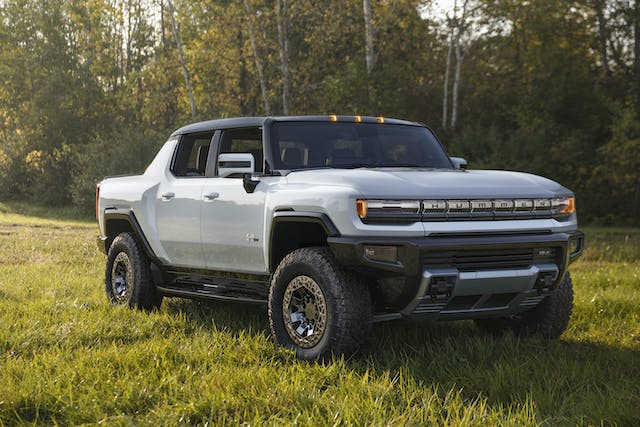 GM knows that these long-view goals are going to require big shifts in infrastructure to encourage consumer acceptance of electric vehicles. To help, GM is pairing with the Environmental Defense Fund and other stakeholders to make sure that there will be charging stations ready to meet demand. One of GM’s partners in this endeavor, EVgo, will be adding 2700 new fast chargers by the end of 2025, all of them powered by 100 percent renewable energy. That’s also going to mean lots of jobs to aid construction and expand electrical grids.

“General Motors is joining governments and companies around the globe working to establish a safer, greener, and better world,” said Mary Barra, GM Chairman and CEO. “We encourage others to follow suit and make a significant impact on our industry and on the economy as a whole.”

GM has a long way to go in order to achieve its lofty aims, but in the meantime the automaker says it will continue to improve efficiency in its gasoline-powered vehicles. Expect ongoing efforts to improve aerodynamics, reduce mass, and fine-tune forced-induction powerplants.

Get an insurance quote
A Story About
Share Leave comment
Read next Up next: Review: 2021 BMW R18 First Edition