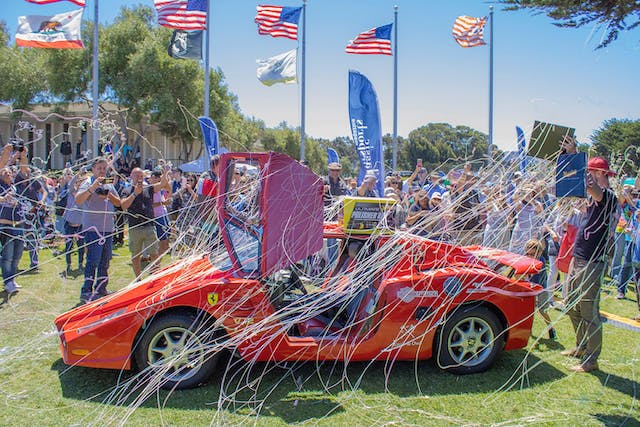 What is the Concours d’Lemons?

Produced by Hagerty, the Concours d’Lemons is a motoring festival that features vehicles that would never find their way into a real concours event. Concours d’Lemons shows celebrate the oddball, mundane, and truly awful of the automotive world!

In stark contrast to other high-end car shows, spectators and participants appreciate the relaxed atmosphere, unique cars, and the event’s humorous and often irreverent take on the car show world. Instead of celebrating the world’s most luxurious and elegant automobiles, these events recognize poor taste, crappy build quality, and sketchy corporate decision-making. The car owners themselves often dress up to match their technological underachieving vehicles. Awards picked up at a dollar store are presented for such classes as “Most Dangerous”, “Slightly Better than a Go-Kart”, “Needlessly Complex Italian”, and “Rust Belt American Junk”. The show culminates with the presenting of the “Worst of Show” award. You could almost think of it as the antithesis of a traditional concours event.

A Car Show Where All Are Welcome

Part of the charm of a d’Lemons event is that everyone is welcome, even if your car is boring. “Lemons reminds everyone not to take themselves, or their car, even a horrible car, too seriously. If you have a sense of humor about yourself and your car, this is the event for you,” said Alan Galbraith, self-proclaimed “Head Gasket” of the Concours d’Lemons.

“It’s almost impossible not to smile when you see a once-forgotten misfit of the automotive world celebrated in the way that only Lemons can do,” said McKeel Hagerty, CEO of Hagerty. ” Concours d’Lemons ties the car community together while creating on-ramps for new enthusiasts.”

Get an insurance quote
A Story About
Leave comment
Read next Up next: RADwood is THE must-attend event for the ’80s and ’90s car-culture enthusiast