Hollywood didn’t make a movie about it, but for the record, Ray Russell was calling his new-fangled Gadabout “the car of tomorrow” by 1944, several years before fellow Michigan inventor and auto pioneer Preston Tucker used the same words to describe his now-legendary Tucker 48.

Didn’t know that? That’s probably because three decades ago, Francis Ford Coppola and MGM turned the Tucker story into a multimillion-dollar film starring Jeff Bridges and Martin Landau, and the shine still hasn’t worn off. In fact, whenever a Tucker changes hands, it’s big news. A seven-figure price tag will do that.

Russell’s Gadabout, on the other hand—wait, the what?! Exactly.

Although Russell’s story isn’t as well-known as Tucker’s, the two men had much in common. Both were forward-thinking tinkerers who lived in the Detroit suburbs and created cutting-edge vehicles aimed at post-WWII America. Both were interested in safety and unconventional design. And, sadly, their dreams both eventually crashed around them. At least the Tucker Corp. introduced a vehicle to market; Russell’s odd-looking car never moved beyond the concept stage.

The Gadabout shared its name with another failed roadster, a 1915 New York-built automobile that the Saturday Evening Post described as “a wicker love seat on wheels.” If that image isn’t odd enough, Russell’s creation was even more out there.

Built on an MG frame, the Gadabout had an aerodynamic aluminum body with skirted wheels and a sharply angled two-piece windscreen. The prototype was right-hand drive, but Russell said steering on production models would be on the left. The Gadabout employed an air-cooled, two-stroke engine with direct fuel injection and turbocharging, and the engine could be installed in the front or the rear (?!), depending on the owner’s preference. Top speed was 50 mph.

An Associated Press photo dated October 12, 1944, included this caption: “Post War Car? Here is the latest model automobile. Just completed by Ray Russell, president of the Detroit Industrial Designers Association, shown at the wheel, it is called the ‘Gadabout.’ Built largely of aluminum and magnesium on an 80-inch wheelbase, it weighs 1,100 pounds. Russell believes it has post-war possibilities.”

At least two national publications agreed. Mechanix Illustrated featured the Gadabout in its February 1945 issue, and Popular Science shined the spotlight on Russell and his inventive mind in January 1946.

“While most of us are sitting around dreaming of the day when we can buy all the gasoline we want, and wondering what the 1946 models will look like, Ray Russell of Detroit has done something really tangible about ‘the car of tomorrow,’” Orin Wright wrote in Mechanix Illustrated seven months before the end of WWII. “Russell, designer, automotive engineer, inventor, artist, sculptor, color (engineering) expert, musician, photographer—the list is interminable, or so it seems—has designed a revolutionary small car which he believes will have an important place in private transportation after the war. The Gadabout, as Russell named his new creation, is a three-passenger, lightweight model of standard width but short wheelbase, designed specifically for use around town or on short trips.”

Russell told the magazine that the Gadabout’s body would be stamped in four simple sections, and a welded steel-tube frame would encircle the car at bumper height, providing extra protection as a “crash pad.” Wheels were individually suspended, using airplane-style mounting with a coil spring and torsion bar. (At this point, it should come as no surprise that Russell was also knowledgeable about aircraft.)

In Popular Science, writer Charles T. Pearson discussed the Gadabout, along with Russell’s other plywood-bodied car and his ideas for amphibious vehicles. But he chose to focus on Russell’s gearless hydraulic drive:

“Lacking a transmission, drive shaft, and differential, a revolutionary new car has been undergoing tests in Detroit. Several pumps are directly connected to the engine crankshaft, and oil under pressure is forced through pipes to ‘motors’ located at the wheels. Among the advantages claimed for this new drive are flexibility of operation, new freedom in body design, and saving weight ranging up to 800 pounds as compared to conventional cars.”

To say that Russell’s head bubbled with ideas is a gross understatement. In 1941, he built a plastic-bodied automobile, then turned to plywood in ’42, before going the aluminum route for the Gadabout. In May 1946, four months after Russell’s ideas were featured in Popular Science, the magazine published another story about his latest invention, a polished-aluminum motor scooter that Russell claimed could travel 100 miles on a gallon of gas.

Russell proved time and again that he could get people’s attention, but his grand ideas often went nowhere. In 1942, he wrote to government officials with a wild idea that he was convinced would change the course of the war.

“Right now we have 5,000,000 cars [that are] over five years old, and each one contains 3,000 pounds of steel, copper, aluminum, and rubber,” Russell wrote, according to The Berkshire Eagle newspaper of Pittsfield, Massachusetts (December 10, 1942). “Suppose we junk them all at once. We would have enough steel to build 5,000,000 small air-cooled motors, transmissions, and wheels for our new plywood body, using only 500 pounds of steel per car and leaving a surplus of 6,000,000 tons for armaments.”

Russell went on: “The new car is not a hundred-mile-an-hour, chrome-plated, gadget covered hearse. It’s a safe, practical car to take us to work at 35 miles an hour, using only a gallon of gas every 40 miles.”

It’s easy to get caught up in the multitalented Russell’s multifaceted story. Hemmings’ Daniel Strohl wrote about his experimental cars not once, not twice, but three times. And at one point Strohl was in contact with Russell’s son, Raymond Benjamin Russell, who provided an uncropped version of the 1944 photo that was released by the Associated Press. The full image shows the nose of another eye-popping concept car parked behind the Gadabout—Rust Heinz’s 1938 Phantom Corsair, which at the time was owned by a friend of Russell.

No, that friend was not a certain inventor that Hollywood made famous. Preston Tucker had his own (clearly more tenable) ideas about what the “car of tomorrow” should look like. Still, what a tomorrow Russell’s world would have been, one full of plywood-bodied cars, motor scooters, and other unimaginable hare-brained concoctions. Shine on, Gadabout, you crazy, failed diamond. 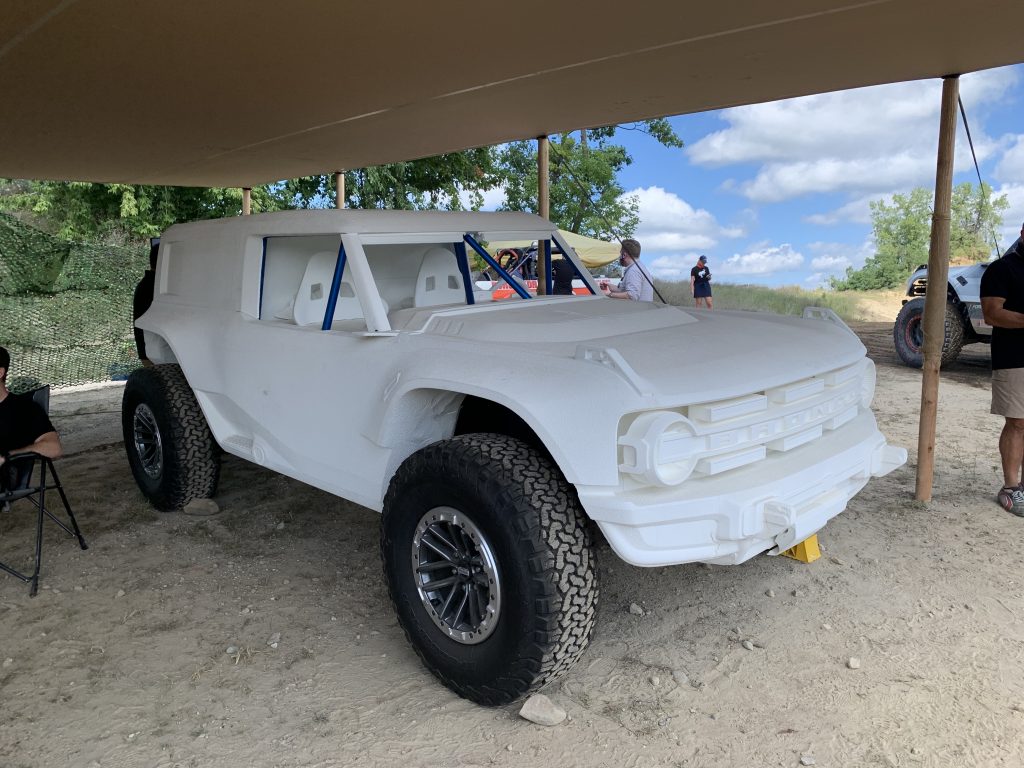 Car Design From studio to Baja and beyond, the Bronco’s chief designer shares his vision for the 2021 Bronco
Grace Houghton 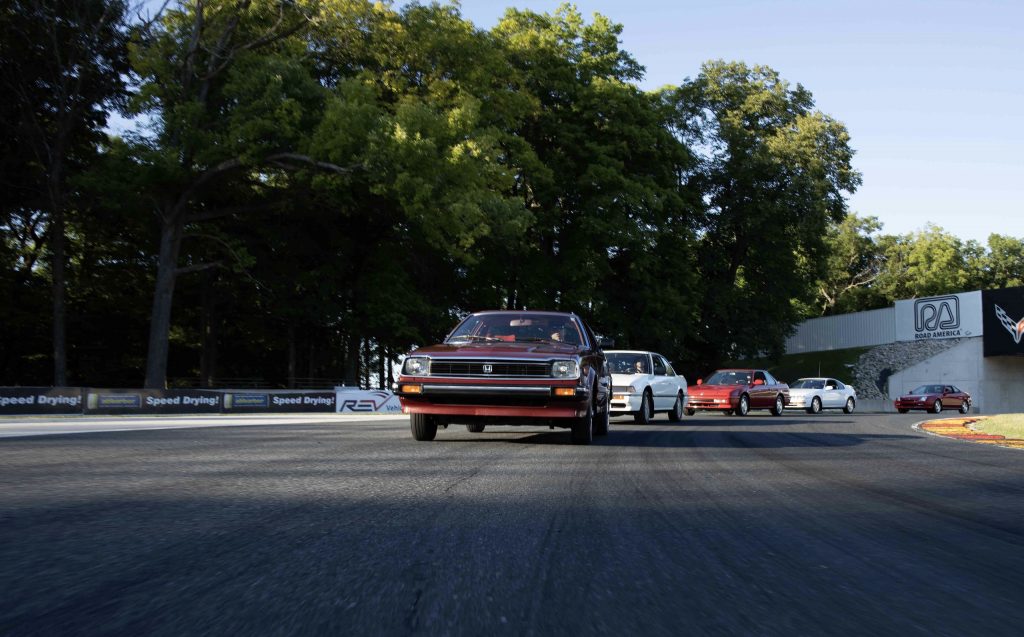 Motorsports For P.D. Cunningham, racing was the Prelude to a dream
Kirk Seaman

People Idaho community is restoring a teen cancer patient’s 1964 Mercury, and you can help
Jeff Peek