For nearly four decades, Steve McQueen’s 1980 talk with student reporter Richard Kraus has been considered to be the great actor’s final, and most charming, interview. The brief chat, which occurred on the set of The Hunter, McQueen’s final film, reveals a man who is already coming to grips with the impact and weight of his legacy as both an actor and a man of action in his own right.

What fewer McQueen fanatics know, however, is that the man gave another interview on-set, two days after speaking to Richard Kraus. The interviewer, Albert T. Tappmann, was a freelancer with some personal connections to Buzz Kulik, The Hunter’s director. During the interview, the tape in the MC60 “microcassette” used by Tappman broke. Lacking the complete interview, Tappman put the microcassette in his archives rather than attempt to reconstruct an article from his memory.

On Tappmann’s death last year, the microcassette was placed in the custody of his grandson, Taylor, who hired a Los Angeles shop to splice the cassette, remaster the audio, and make digital copies. We were given a chance to listen to a snippet of the restored audio, which is surprisingly good. The full transcript of the interview, along with a link to a digital music file containing the audio, will be part of Taylor Tappmann’s upcoming book, ‘The Hunter’ Becomes The Hunted: Steve McQueen, My Grandfather, and One Fateful Evening in 1980. The book draws the obvious parallels between McQueen’s star-studded, action-packed life and Albert T. Tappmann’s brief career as a Vietnam-era Army chaplain before coming home, abandoning religion in favor of freelance writing and Erhard Seminars Training, then dying in his seventies from emphysema.

In the meantime, we’ve been given permission to share part of the interview below. We think you’ll find it to be worth the read.

MCQUEEN: That’s fine. You know it’s funny—after not giving any interviews for ten years or more, now I’m doing about one a day, it seems. Tell Buzz he owes me one.

TAPPMANN: Ah, yes, (inaudible) can tell you just how deep the rabbit hole (inaudible) on that. So, this new film, Hunter—

MCQUEEN: I don’t want to talk about it.

TAPPMANN: Well, alright, is there a better topic—

MCQUEEN: You tell me, I’m on your time.

TAPPMANN: Well then. Of your films, which one seems to you in retrospect to, ah, have the most, ah, staying power—

MCQUEEN: (curtly) Well, I don’t think you can ask that question and come up with any answer besides On Any Sunday, can you?

MCQUEEN: … Sunday. It’s called On Any Sunday, it was filmed by Bruce Brown, a great guy and a real person, and it’s about the power of the motorcycle to take us places. I appear at the end of it, and I helped finance it. I ride through a puddle, but I don’t get wet. The other two guys, Mert and Malcolm, they got wet. We didn’t plan for that. It’s just how it happened.

MCQUEEN: We didn’t plan that they would be the only ones to get wet. But that’s how it happened. We’re all riding through a puddle. But I don’t get wet. Mert and Malcolm? Soaked. And that was before (inaudible) so it couldn’t be faked. We didn’t have the Star Wars, you know, the thing where the guy in a lizard suit says they’re going to “beam him up”, which is bullshit. You can’t beam people up. It was just me, Mert, Malcolm, and that puddle. They didn’t know what was going happen. Did I know? It’s okay for you to ask that.

TAPPMANN: Well, I will have to watch this Any Given Sunday film.

MCQUEEN: How, exactly? You gonna rent out a theater and watch it by yourself? We never put it on laserdisc. Don’t jerk me around. Let’s talk about something else.

TAPPMANN: Certainly. Let’s go back to the two films, Bullitt and Le Mans, that cemented your position as “King Of Cool”. I’m told you did some real driving in those films.

MCQUEEN: I did some driving on Bullitt, yeah. But we had problems with the script. The script calls for Frank Bullitt to drive a Mercedes convertible. You know, he’s an educated man, he’s got a career, he’s devil-may-care about things, so of course he’s going to drive something like that. Well, somehow this was too tall of an order for the stunt coordinators, so they go to the junkyard or somewhere and come back with this clapped-out Mustang. “This looks,” I said, “like something a pervert would drive.”

MCQUEEN: Let’s not mince words. I look at you and say, “This is someone who knows (inaudible)…”

TAPPMANN: I don’t know how to respond—

MCQUEEN: Don’t bother. So anyway. Then these geniuses say that the car chase will be between a Mustang and a Charger. “Great,” I said. “By all means, let’s have the two worst cars in San Francisco for this. Because I assume you couldn’t find two rusted-out Beetles.” That’s why I look disgusted during that scene. That’s not acting. That’s the real me. Disgusted. And as you know, the scene was garbage.

TAPPMANN: To the contrary, I—

MCQUEEN: Watching the dailies, I said, “How many hubcaps do these cars have?” Nobody could give me an answer. Apparently they kept putting the hubcaps back on. Well that’s as bad as wearing a lizard suit and humping a rubber rock in prime time. When you’re a bad guy, being chased by a good guy, you don’t have time to put the hubcaps back on. It’s a critical error that throws the whole film into question. We had other problems. If you watch this movie—we are gonna put it on laserdisc, seventy bucks and you can watch it with all your friends, don’t have to pay for each one, it’s basically stealing—you can see that all of Robert Vaughn’s pants are cut too short. All of them. Because they thought it was Robert Wagner in the movie. Who is shorter. I doubt you know that.

TAPPMANN: It hadn’t occurred to me that I—

MCQUEEN: Just say you don’t know. Don’t be a phony. I hate phonies.

MCQUEEN: You see. When you say something like that, and you say it like a man, we have something to build on.

TAPPMANN: Ah … alright. If I may. The movie Le Mans.

MCQUEEN: Fiasco. I don’t know any other way to say it.

TAPPMANN: The common thought is—

MCQUEEN: Let me tell you. There is a certain color of blue that they used on the Porsches in that movie. And it is, I kid you not, the same color as the disinfectant cakes used in a men’s urinal. “Get another color,” I said. “This is a toilet cake color.” Well, you know, the Porsche people, they’re telling me that they have a sponsor for this, I think it was Martini …

TAPPMANN: Gulf, it was Gulf.

TAPPMANN: I assure you, it was Gulf.

MCQUEEN: Anyway, I told them “The Martini color, the toilet cake color, you put it against a blue sky and you can’t see the car.” I had this idea to have everything repainted in a psychedelic style, very classy, and to use the kind of cinematic techniques we used in The Thomas Crown Affair. So then I have people from the Fee-ah …

MCQUEEN: Fee-ah, they run the race. The Fee-ah people say, “Monsieur McQueen, eet ees ze race that is happening today, we cannot paint all of zees voitures overnight…” You can’t expect the French to do anything. I had my crew repaint one of the cars the night before the race. Well, there was a big problem with that, for some reason.

TAPPMANN: You … repainted one of the Porsche 917 racers, the night before the race?

MCQUEEN: If that’s what they’re called, yes. It was gorgeous. Looked like a Jimi Hendrix guitar. Well, then they said they had to use a “spare car” for the race. And I didn’t even know they had spare cars. “You’re being awfully difficult about us crashing a few of these in the race for the movie, but you have spares.” Explain that to me.

TAPPMANN: Well, it sounds like you had some problems.

MCQUEEN: That’s not the half of it. They had me drive a bit in the race. Well I took the lead almost immediately. Then they said I had to come in so one of the German fellows could get some time in the car. I didn’t see the sense in that. They were waving every flag at me except the one that said the car was going to run out of gas. Which happened way faster than you would think. I mean, you drive a Beetle from Stinson Beach to Eureka, that’s one tank of gas. Take you all day. This thing ran out in two hours. I told the man running the team, “You fix that problem with the leaking gas tanks, and you have me drive the whole thing, then you’re going to win, it’s that simple.”

TAPPMANN: You faced a real challenge making a movie out of the footage you had.

MCQUEEN: Did we ever. I sat in the trailer for two weeks and couldn’t come up with a script that would make sense. Not with that footage. So in the end they just followed me around with a camera for a day and we improvised the whole thing. Street theater style. I’ve never felt so alive as an actor, so connected to the work of it. If you watch the movie closely, there’s a woman in it who says her husband died in the race the prior year. Get this. We don’t know who she was. Never got her name. I don’t know anything about her, or her husband, who died the year before in the race. That was real. We just used it. That’s acting. Putting on a lizard suit and letting some lounge singer punch the air in front of you while you wobble around like a moron. That’s not acting. And the people who say it’s acting, should know what it’s like to lose everything they’ve ever loved, like that woman did.

TAPPMANN: If you’re saying that whole movie was improvised …

MCQUEEN: I just told you it was, idiot. (Scuffling noise) Here, let me put this stupid tape recorder in your mouth so you can listen to it. (More scuffling).

MCQUEEN: As I was saying, complete improvisation. I said things that didn’t make much sense. I said racing was “a professional bloodsport”. It’s obviously not. You don’t kill any animals during a race. And if you do, they don’t pay you extra for it. Also, I said, “When you’re racing, it’s life. Anything else that happens is just waiting.” Now, that quote is meant to show the vacancy of Michael Delaney’s mind, to show you that he’s latched on to this ridiculous roundy-round race as a way of avoiding the hard questions. Like, has he ever loved anyone. Does he have a plan for the future. That kind of stuff. Well, I was sitting at home last year and some idiot showed up wearing a T-shirt with that quote on it. Before he could say anything, I yelled, “Here’s your Martini Blue!” and I stuffed a toilet cake in his mouth. Imagine thinking that’s a philosophy to be admired, rather than the barbaric yawp of a man who elicits only pity in the educated viewer.

TAPPMANN: (catching his breath) Well, can we talk about the scene in The Great Escape when you jump the—

For the rest of the interview, make sure you check out Taylor Tappmann’s book, entitled I Knew It All Along: April Fools’ Jokes And The Websites That Rely On Them Despite It Being A Terrible Idea! 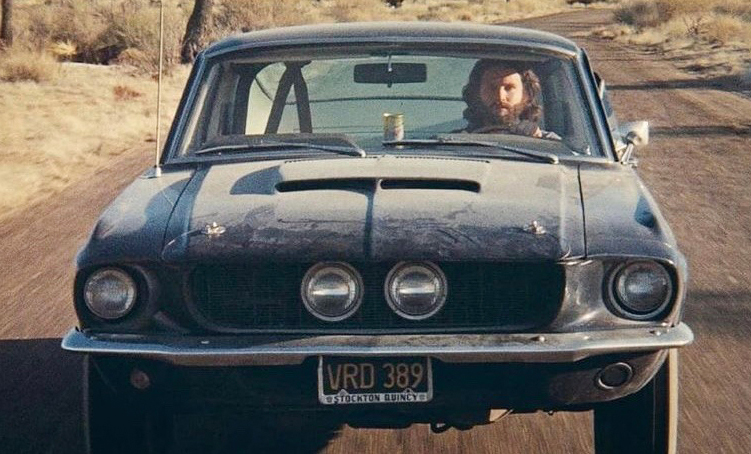 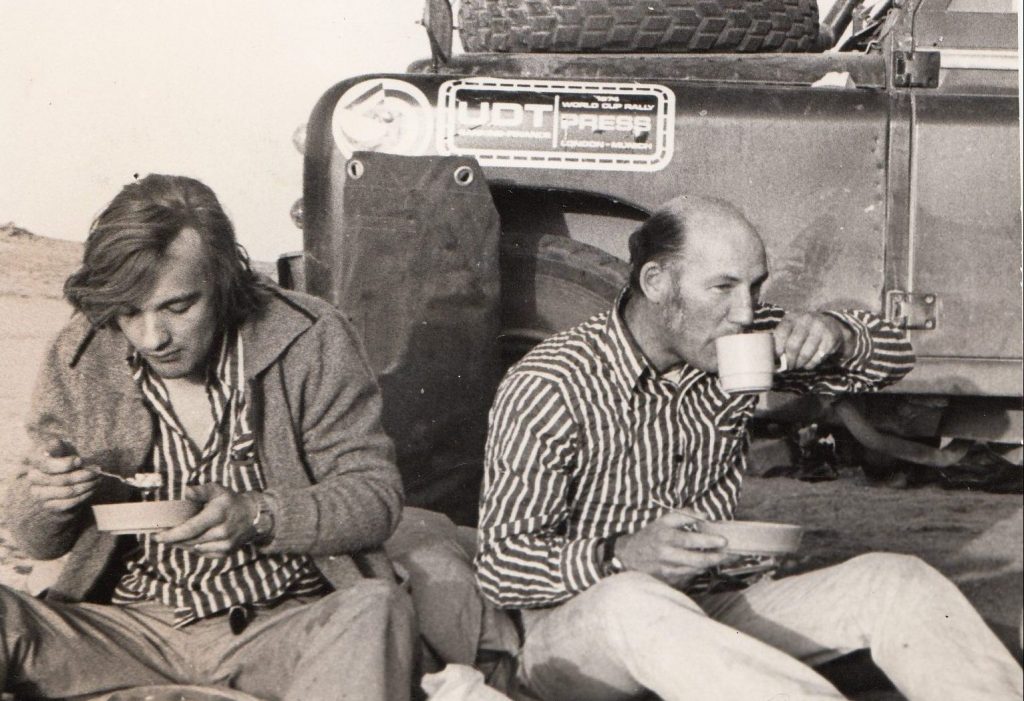