Saved by the old-school radiator shop

You ever do a repair, see the finish line, and feel like the inmate on the prison break with one leg over the barbed wire fence—only to have the dog grab the other leg and drag your butt back down?

I was nearing the end of an air conditioning retrofit into my 1972 BMW 2002tii. I had all the components and newly-fabricated hoses installed and had finished pressure-testing the system with nitrogen to ensure that it was leak-free. The time had come to button things up and enjoy a cold car in the hot weather. The radiator was still out of the car; it needed to out in order to put the new condenser and fan into the nose. Now that I was certain that the system was tight, I dropped the radiator back in, bolted it to the nose, reconnected the hoses, and filled it with fresh antifreeze.

I started the car, topped off the antifreeze, stood over the engine compartment, admired my handiwork, and began thinking about charging up the now-installed A/C system, when I noticed that the lower radiator hose was touching the compressor pulley.

I was surprised, but not necessarily alarmed. The original lower hose outlet on BMW 2002 radiators pointed straight back like this one, which didn’t leave a lot of room for an A/C compressor. No 2002 had factory-installed air, but A/C could be installed by the dealer (see this story for a rundown). At some point, the BMW factory began using a radiator with a side-facing outlet that kicked upward, avoiding any compressor clearance issues, and, I believe, installing it on all U.S.-bound cars just in case the buyer wished to have A/C installed. New OE BMW 2002 radiators ordered from the dealer have gotten very expensive, but a company in Germany called Walloth Nesch, which reproduces a variety of vintage BMW parts, has a well-priced “extra cooling” radiator that, last time I bought one, was less than $300 shipped from Germany. It has the rear-facing port, but I and others found that, if you trim the hose, there’s just enough clearance for a compressor.

So why didn’t I see the problem before now? Because I’d pulled the radiator out of the car and dropped it back in with the hoses and the externally-mounted thermostat still attached (it keeps a lot of the antifreeze in the radiator and also makes a good handle). Really, the only thing that I was miffed about was that, to trim the hose, I’d need to dump the just-added coolant.

Well, no sense crying over spilled antifreeze, right? Just get on with it. I cleaned, rinsed, and wiped my coolant drain pan to enable the possibility of reusing the brand-new coolant, drained it in, undid the lower radiator hose, pulled it off, trimmed about half an inch off it, and was about to pop it back on when I saw a much larger problem.

Normally, when I do A/C installations or rejuvenations, I use the venerable Sanden 508 rotary-style compressor or one of its inexpensive clones. This time, to save money, I elected to take a used compressor I had kicking around the garage and press it into service. It’s a Seltec, a high-quality Japanese-made compressor I put into my 1973 BMW 3.0CSi over 20 years ago. I’d swapped it out a couple of years ago as part of a refresh that had nothing to do with the compressor. I thought, “Why am I holding onto this if I’m not going to install it on a project like this where I could actually use it?” Unfortunately, I never looked closely at the clutch plate on the compressor’s nose. I now could see that, unlike the Sanden which has a flat nose, the Seltec’s nose has three large nubs. As soon as the compressor was turned on, even with the lower hose trimmed to pull it away from the rotating pulley, those rotating nubs would tear through the bottom of the hose like Rommel through Egypt.

I had a few options. Basically, I could deal with the compressor or the radiator. In the compressor department, I could buy a Sanden 508 clone with a flat nose and install it. They’re as low as $80 on eBay. Or I could try swapping the pulley and clutch from a damaged Sanden I had kicking around the garage onto the Seltec (as I wrote a few weeks ago, yanking off the clutch plate, pulley, and bearing isn’t difficult). Radiator-wise, I could source a radiator with the compressor-compliant lower port, or possibly have my existing radiator modified by grafting on a properly-angled port.

Then I recalled that I likely had a 2002 A/C radiator kicking around under the porch, yanked out of one of the cars years ago in favor of a new Walloth Nesch “extra cooling” radiator. I rooted around, laid my hands on it, test-fit it in the car, and verified that it had oodles of clearance of the Sanden’s odd nose.

So, just swap radiators, right? Well, no. The only reason that a compressor-clearing radiator was under my porch was because years ago I’d yanked it out of a 2002 years ago since it wasn’t cooling the car adequately in hot weather. And you can be as certain as death and taxes that its cooling capability hadn’t been improved by years of dirt and stasis.

I used to have radiators and gas tanks fixed locally at old-school radiator shops but moved away from it for a couple of reasons, including having a few re-cores come back improperly offset, creating fan clearance problems. Then I began using a shop in California, which had the best reputation in the BMW-specific radiator business. Then the owner passed away. I bought one radiator from the guy who succeeded him, and it solved every cooling problem that my 3.0CSi had. I ordered another one from him for my 2002, and then he closed the business, taking my money—and other people’s—with him. When WN began selling well-priced new radiators and gas tanks, and they worked well and looked nearly stock, I had no compelling reason to use radiator shops.

I posted my radiator-to-compressor clearance conundrum to Facebook, and a friend of mine wrote, “In case you need a radiator shop, J.P. Carroll’s in Lexington still does radiator work. I took an 02 radiator there a while back and the guy ID’d it correctly from a distance while I was carrying it in.”

Just inside the border of the tony suburb of Lexington, Massachusetts, is a place you wouldn’t think could still exist. Up on a hill, overlooking a golf course and a farm, is a junkyard and a sprawling array of buildings for scrap metal processing, auto repair, tow services, and sales of used and new parts. I lived in Lexington when I went to high school and recalled a few trips to Carroll’s junkyard 45 years ago to get parts for my 1970 Triumph GT6. More recently, I went there for used parts for my Suburbans, but even that was easily 20 years ago. And I had no recollection of Carroll’s doing radiator repair work. But I checked the website, then called and described the problem of re-orienting the lower radiator port. The fellow said, “Sure, we can do that. Bring it down.”

Lexington is only two towns over from where I am in Newton, so I was off like a shot. I went into the main building, was directed into the radiator repair shop, walked in carrying the two 2002 radiators, and just as my friend had commented on Facebook, the radiator guy, Dale Murphy, said “Those look like they’re from a BMW 2002.” Winner winner, chicken dinner.

I explained that the new-ish radiator cooled the car just fine, but I needed its lower port to look like the old-ish radiator. Dale looked at it and said, “It’s probably easiest just to swap the lower tank for the one with the port on it. I can have it in a couple of days.”

The very next day, I got a call from Dale saying it was done. I asked for the damage, and he told me a number so low that I literally said over the phone, “I love you, man.”

I drove back to pick up the radiator and wound up spending nearly an hour at Carroll’s. Dale said that he does a lot of vintage radiator work. He showed me a just-completed radiator for a vintage Cadillac, and a work in progress for another vintage American car, in which he was fabricating an upper tank while reusing the pieces that had the original Harrison radiator stampings on them.

When I went to pay the bill, it was to John Carroll himself. It turned out he’d always wanted to own a 2002, plus we had a friend in common, so we began chatting. We had a delightful, unexpected, and wide-ranging conversation on going through life a certain way—doing what you enjoy, not putting on airs, living within your means, and how not everything has to be about squeezing the last dollar. I thanked John and Dale profusely for the rapid and incredibly reasonable radiator service and promised to return with one of the 2002s John could ogle and drive if he wished.

I got home and dropped the reconfigured radiator into the car. It fit flawlessly and completely solved my problem, effectively putting the prison-yard dog back in his doghouse.

I posted the experience on Facebook, and a number of friends I went to high school with in Lexington chimed in on how, back in the day, John Carroll or his shop had helped them out of tight spots, like fixing their car quickly when it died as the family piled into it headed off on vacation. Out of curiosity, I checked the Google reviews for his repair and parts business, and they were practically off the charts.

So, yes, thank heaven that, in a time of disposable aluminum-and-plastic radiators, old-school radiator shops like this still exist. But in a larger sense, thank heaven that old-school businesses in general still exist, where people do what they say, treat others fairly, and don’t treat every transaction as an opportunity to perform a cash-ectomy.

Thanks, John and Dale. You guys totally made my week. 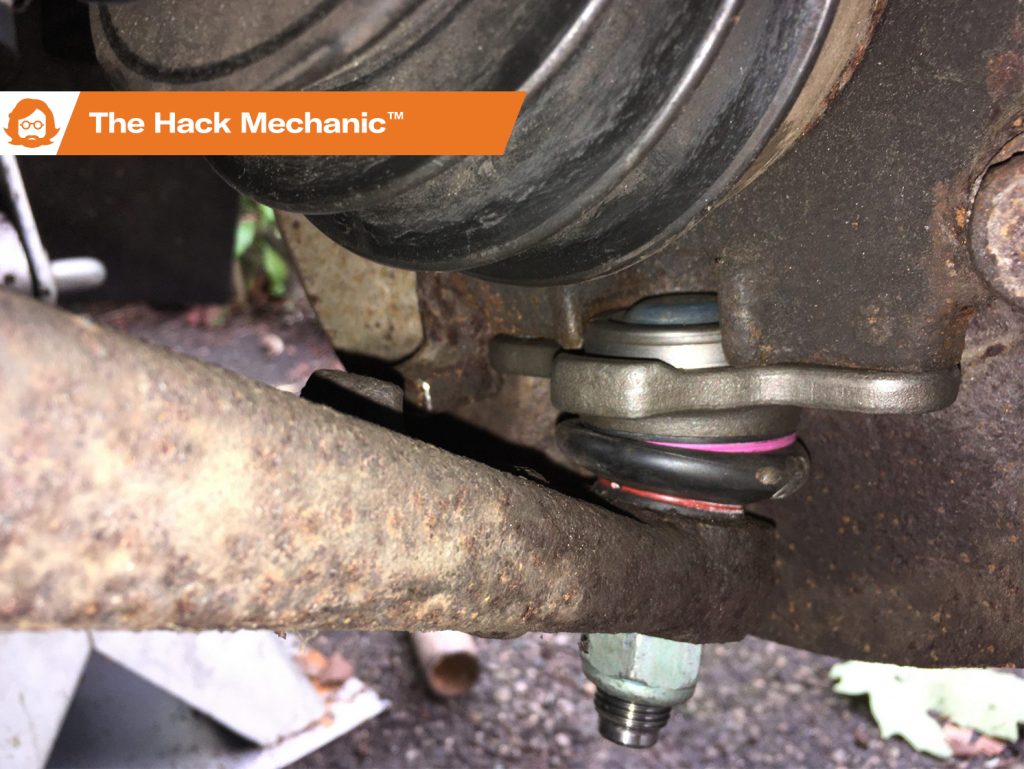 The Hack Mechanic The advantage of bilateral repairs
Rob Siegel 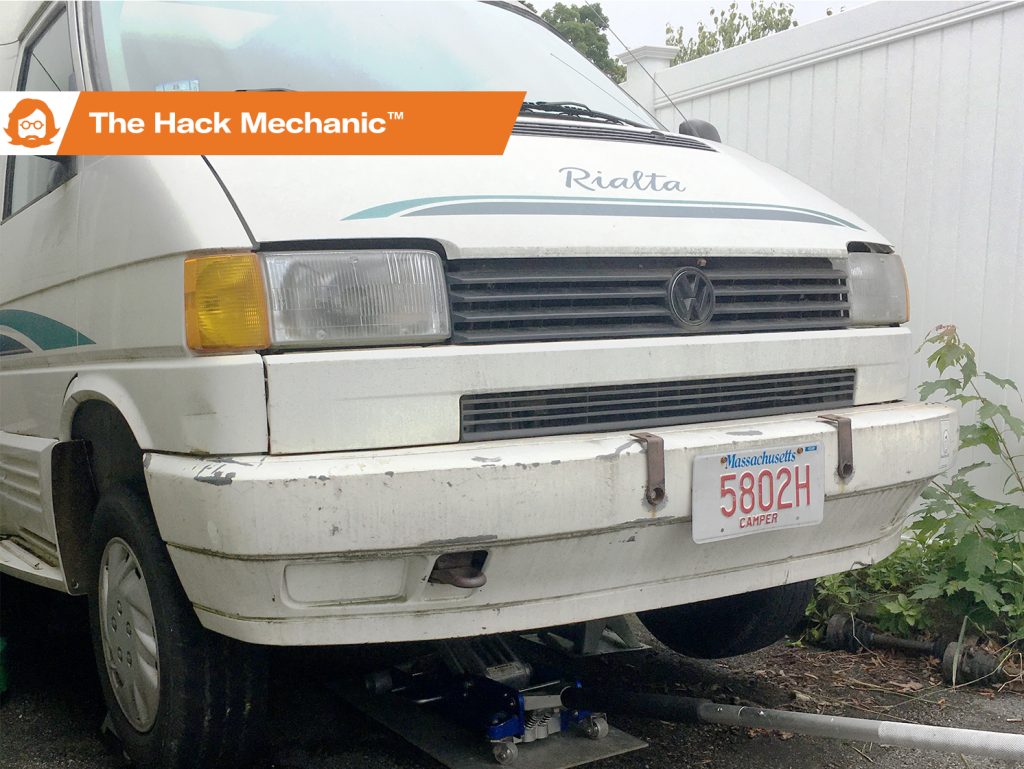 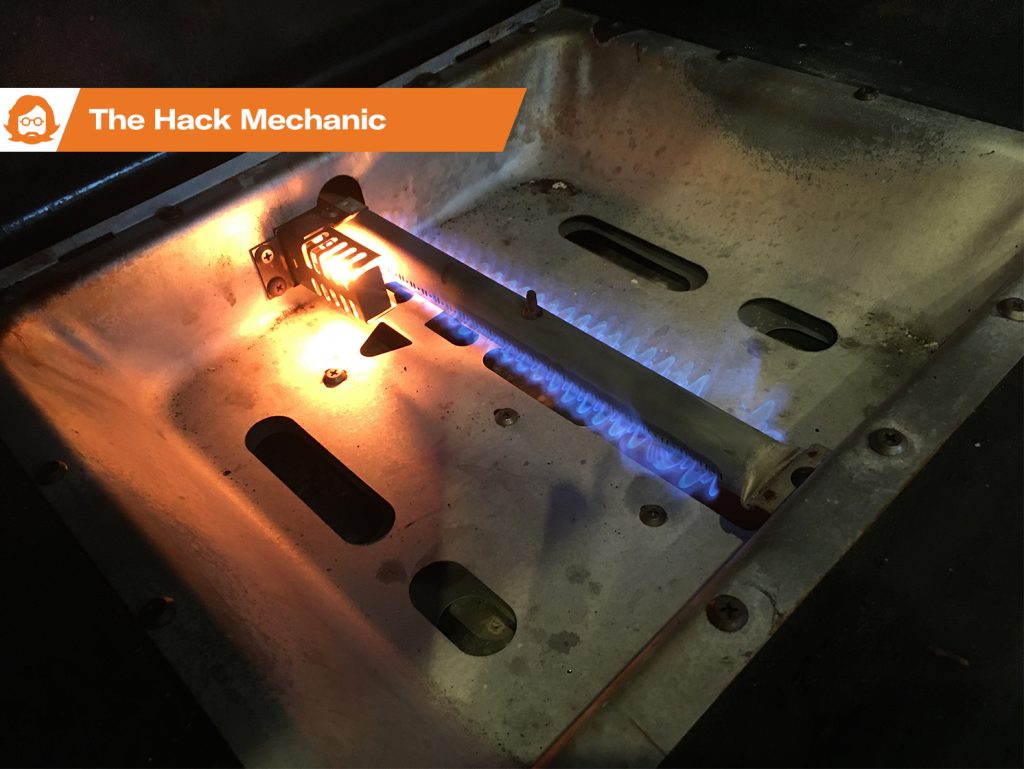 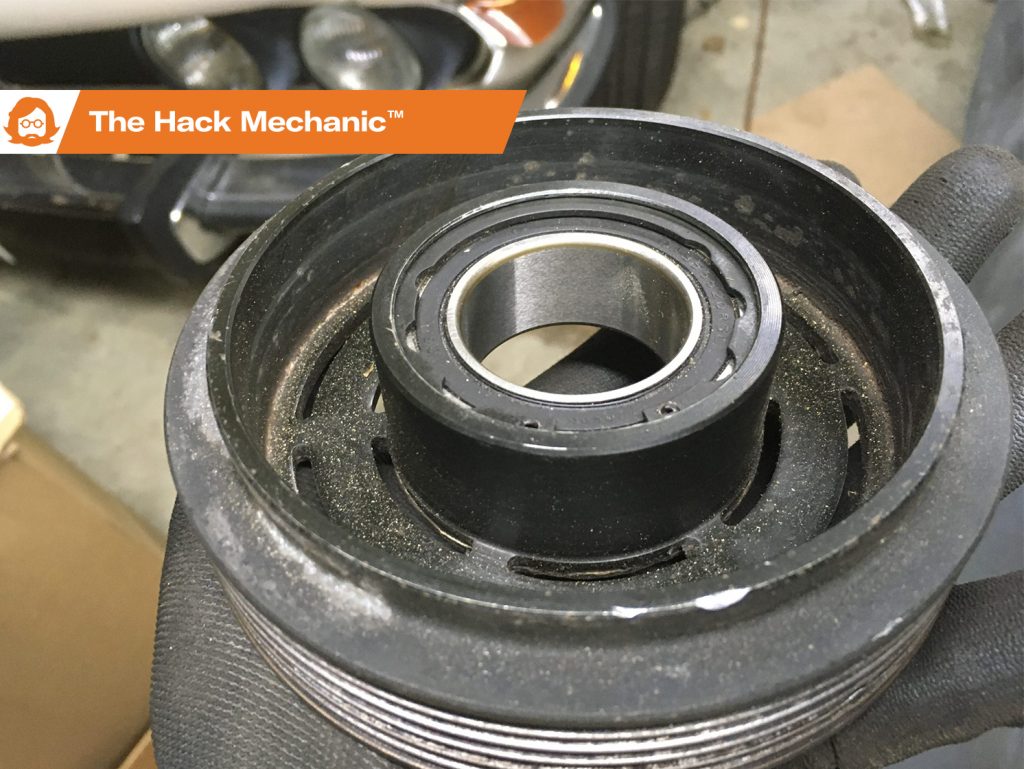 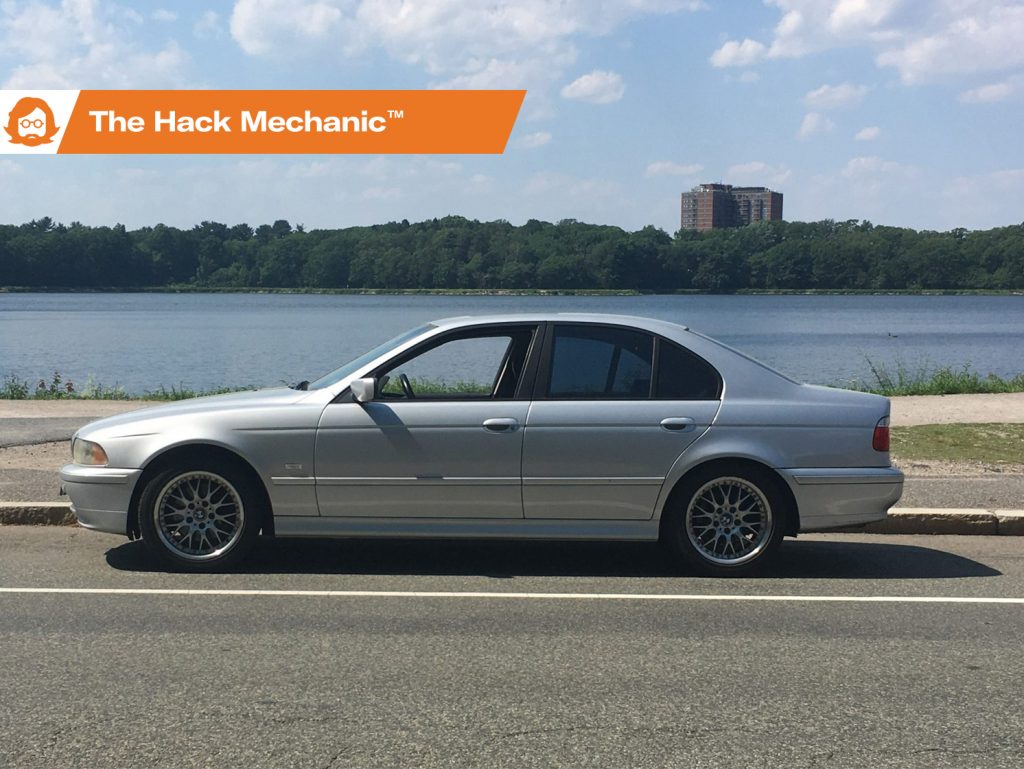