Intake: Following multiple reports of leaks, contaminated filters, and outright failures of the Tremec dual-clutch automatic transmission in the C8 Corvette, GM has notified the National Highway Traffic and Safety Administration (NHTSA) that it is looking into the problem, according to a report from autoevolution. The most likely culprit appears to be a faulty gasket between the transmission pan and the gearbox itself. A thread in the MidEngineCorvette forum notes that a redesign of the transmission pan for a portion of C8s built as 2021 model-year vehicles was intended to remedy that issue.

Exhaust: A new piece of performance hardware like the C8’s tech-laden dual-clutch automatic can be a tough thing to get right, even with GM’s thorough stress-testing during development. While it’s surely a frustrating situation if you’re a C8 owner, better to be safe than sorry, and have the issue fully investigated and (hopefully) remedied by your local dealer. The stakes are high for Chevy to figure this out; “bargain performance” aside, C8 customers will be expecting a dealership service experience worthy of a near-$80K (3LT coupe with Z51 package) investment. That’s not exactly Equinox money.

Holden’s Australian proving grounds are up for sale … again

Intake: Vietnamese automaker VinFast, which less than a year ago purchased the Holden proving ground for $36.3 million, has abandoned its plans for the 2200-acre property near Melbourne. VinFast had intended to use the land for its Australian engineering operations but recently put the property back on the market. (Presumably, the manufacturer’s GM-powered BMW X5 derivative doesn’t need the running room.) An environmental group is urging the state of Victoria to buy it and officially turn it into a wildlife refuge, since animals have been migrating to the site since Holden left. But the real-estate firm representing VinFast believes the property will sell for more than what VinFast paid. General Motors had used the site from 1958–2020 to develop Holden automobiles.

Exhaust: Six decades of automotive history permeate the Holden proving grounds, so we were encouraged when another automaker bought the property last fall. With the news that VinFast is out, the land’s fate is once again unknown. Whatever happens, we hope there’s a way to preserve at least some of its GM/Holden past.

Jeremy Clarkson’s Ford GT could be yours

Intake: A 2005 Ford GT originally ordered by Jeremy Clarkson is for sale in the U.K. One of just 27 cars sold in Britain, Clarkson specified the car in Midnight Blue with white stripes, and six-spoke BBS alloy wheels. He also had an Alpine stereo installed on the odd occasion he wanted to drown out the glorious sound of the 5.4-liter supercharged V-8 engine. Clarkson’s time with the GT40 was hardly happy, however. After installing an aftermarket security system, the ex-Top Gear tall guy said he had: “the most miserable month’s motoring it is possible to imagine. It’s a great, great car that was ruined by a useless ape who fitted a crummy aftermarket alarm system.” The current owner bought the GT in 2006 and appears to have had a rather better experience, racking up the majority of the 24,454 miles on the odometer, and fitting an Accufab sports exhaust and upgraded KW suspension. The car is being offered at a fairly reasonable £269,000 ($366,600) at Essex dealer GT101 who has also just serviced it.

Exhaust: This may not be the very best Ford GT—pause—in the world, but it appears to be decently priced and well-maintained. Whether Clarkson’s ownership is a selling point is up for debate.

Could the Norton V4SV succeed in (finally) reviving the Brit brand?

Intake: Norton is a storied brand in the British motorcycle world, but sadly its long history includes multiple failed attempts at revival. The V4SV superbike is the latest hopeful, the fulfillment of a promise that Norton made nearly five years ago. There have been multiple shifts in Norton’s fate between then and now, including the purchasing of its branding and intellectual property by TVS, which is based in India. Thanks to the deep pockets of TVS, Norton stands a better chance than ever of getting back on its feet.

Exhaust: The original V4 model was a low-volume affair that proved quite trouble-prone, and thus this new V4SV is a revolution rather than an evolution. The engine is still a 72-degree V4 but has been detuned to 185 hp from the original 200. That, and the weight increase from 385 pounds to 426, likely indicate this will be a more durable and reliable machine. The styling is flashy enough, but all the pictures show track-only exhausts and minimal lighting kits, so we’d would be naive to think this is the final look. We still dig it though, and are pulling for these to live up to Norton’s hallowed legacy.

Jeep wants a taste of the aftermarket graphics action 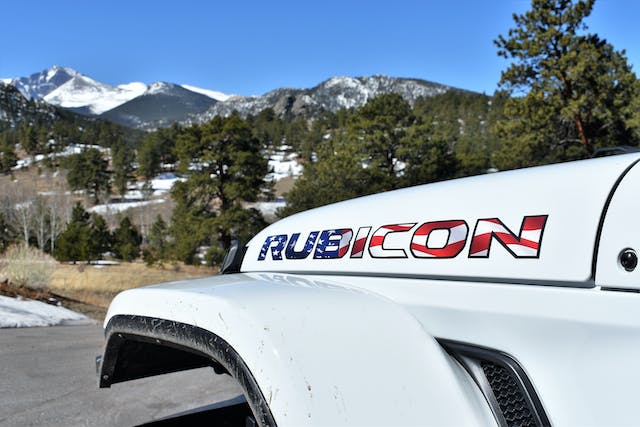 Intake: The Jeep Wrangler has been a sales success for decades, but until now its loyal owner base couldn’t customize the rig’s look with factory-quality graphics. Enter the Jeep Graphic Studio, a place where officially licensed, customized merchandise is available for Wranglers (and Gladiator trucks), including 3D-printed shifter inserts, fender inserts and hood graphics. Perhaps unlike your local vendor, Jeep offers a “5-7 year guarantee (depending on pieces) against UV damage and graphic peel.”

Exhaust: This is likely just the beginning—you can expect a whole lot more custom vinyl/3-D printed parts from the Jeep Graphic Studio in the future. And local malls are eagerly awaiting this change in decor to their parking lots! While cars-and-coffee attendees may exclaim, “Hey, they never made a My Little Pony Wrangler,” the fine folks at Jeep see gold in them there customizable hills. In some way the Jeep Wrangler has become what Toyota’s Scion brand wanted (and failed) to be: perfectly customizable and endlessly profitable. And that precedence may just be the best thing about the Jeep Graphic Studio.

New VW ID.5 is for the Old Continent only

Intake: VW has launched a sportier, coupe-like version of the ID. 4 crossover in Europe. The ID.5 has a lower, more aggressive look thanks to a revised roofline and tailgate, which hampers rear headroom and luggage space a tad, but does give it a racier appearance. What’s more the ID.5 will be offered in GTX trim with more go to match the show. It twin electric motors muster 300 hp, so the all-wheel-drive GTX can accelerate to 62 mph from a standstill in 6.3 seconds, which compares to 8.4 and 10.4 seconds for the other two iterations in the line-up. The lower-power cars do, however, have a little more staying power with a claimed range of 323 miles, while the GTX makes do with 304 miles. All version come with a 77-kWh battery capable of charging at a speedy 135 kW. Inside, the ID.5 is essentially the same as the ID.4, but the touchscreen has received an update to be more responsive. Prices in Europe start at a dollar-equivalent of around $64,000.

Exhaust: Just like the ID.3 hatchback, VW has no current (pardon the pun) plans to bring its latest electric vehicle to the U.S.A., so the only Voltswagen on sale remains the ID. 4.

The Manifold Porsche’s off-roading 911, GM earmarks $7B for Michigan, Bugatti’s not done with ICE
Hagerty