I love my 1960 Norton, but buying a British bike as an investment is foolhardy

“I think my roof is leaking again,” said my lovely 89-year-old neighbor in the UK, who lends me space in her barn. “Your motorcycle is sitting in a huge puddle of rainwater.”

Right description, wrong fluid, as once again my 1960 Norton Dominator SS650 cafe racer had emptied the entire contents of its oil tank down past the oil pump and into the sump, where it had drained into the primary drive case and out onto the concrete floor. Nortons, like a lot of old British machines, are embarrassingly incontinent.

Yet my old motorcycle can bring an entire car park to a halt as people go all misty eyed at the sight of its patinated finish. They take pictures and, when I swing the starter and the twin megaphones bathe those around in noise and hydrocarbons, they scarcely notice the Norton’s not-so little calling card left on the Tarmac.

Old motorcycles are the juice at the moment. Auction halls are full of coruscating or corroded machines, with desirous and occasionally deluded punters (gamblers) imagining a youth they never had; the “ton up” (100-mph ride) to Brighton, the milky coffees at London’s Ace Cafe (it’s still in business, by the way), and the quiet tinkering. Indeed it was Donald Heather, managing director of Associated Motor Cycles (AMC) who was once moved to observe that “most motorcyclists love to spend their Sunday mornings taking off the cylinder head and reseating the valves.”

Just how much this tells you about the death of the British motorbike industry is a moot point. I can thoroughly recommend Steve Koerner’s The Strange Death Of The British Motor Cycle Industry for a level-headed examination of the litany of jaw-dropping missed opportunities, crazy management, unions, workers and the blinkered Government and companies, which saw UK motorcycle production fall from a peak of 234,300 in 1959 to only 26,900 in 1975, with a concomitant rise in exports from 1600 in 1952 to 278,600 in 1975.

Even at the time, however, Heather’s comments were attacked. He was one of a generation of motorcycling bosses, riding enthusiasts who felt it kept them in touch with owners. Trouble is it didn’t keep them in touch with non-owners, the folk who didn’t want an oil-spewing, large capacity, unreliable motorcycle but instead wanted reliable, small-capacity machines—a gap in the market that the Italians, and later the Japanese, were only too happy to fill.

And exactly why did they split the crankcases vertically and use that horrible bent-tin primary drive cover? Design engineers Bert Hopwood (Norton Dominator), Valentine Page (Ariel KH/KG), and Edward Turner (Triumph Speed Twin) all pioneered the post-war popularity of parallel-twin engines, which were powerful and efficient. But all of them left dark, slippery oil patches on the drives of American homes and side streets. And there’s not much excuse, since Honda’s 1961 Super Hawk CB77 had horizontally-split crankcases.

Actually it’s something of a miracle Hopwood’s Norton did as well as it did against Triumph’s all-conquering Bonneville. Hopwood’s design traced its origins back to the 1951 Model 88 Dominator and it was built at the company’s antediluvian Bracebridge Street facility. Norton could barely build 200 machines a week, which was hardly the export sensation that the unprofitable company needed.

Yet the Dominator was in many respects the superior machine. Its softly-tuned OHV parallel twin and its Associated Motorcycles’ four-speed gearbox, fitted into a Slimline version of the McCandless bothers’ famous Featherbed duplex frame, which gave it sweet handling. Add the 650SS’s twin leading-shoe front brakes and it stopped as well. It wasn’t as good looking as the Triumph, but dynamically it more than cut the mustard. And the 49-horsepower 650SS was the company’s superbike, or at least it was for about six months until the North American dealers demanded more capacity and the 750cc Atlas was born.

Heather’s comments still seem somewhat pertinent, even though they were attacked at the time (Koerner quoted Francis Jones, columnist for Motor Cycle And Cycle Trader, in 1951: “Extraordinary as it may seem, the belief is still current that a motor cyclist (sic) must be something of an engineer if he is to get satisfactory service out of his machine.”) I used to earn a living as a mechanic, yet in trying to change the main engine oil seal I managed to lose a woodruff key and wreck the alternator, which has cost a pretty penny. Old Brits are neither obvious nor easy to fix.

Tim Harrison, chairman of the Norton Owners’ Club, recognizes the situation. “Younger people are coming into Norton ownership,” he says, “and we often find they haven’t had the experience and don’t have the knowledge.”

While he acknowledges that you don’t have to own a lathe to own an old British machine, it often helps to know someone who does. So what happened to all the motorcycle engineering workshops that could maintain old motorcycles?

“I wouldn’t say they are disappearing exactly, but there aren’t as many, and those we have left don’t take as much work on,” he says. “Some people are predicting that quite a lot of old machines are going to come on the market in the next couple of years as collections are sold, so perhaps there will be a gap in the market for those people who know what they are doing.”

The elephant in the room here is more modern machines from Japan, Germany, and Italy, which are beginning to be sought after by investors. In many cases these aren’t peerless examples of reliability, though, particularly if bought untried at auction.

One highly experienced observer who prefers to remain anonymous sees the investment auction business as a “South Sea bubble about to burst.”

Certainly there’s a train of thought that goes on the lines of, “You can’t lose money investing in a classic bike,” but that can be an exorbitant doctrine. Rich folk might bid on provenance and rarity, but there are a fair few expensive workshops in the UK and the U.S. whose major stock in trade is making auction disasters work, and that includes fixing split crankcases, replacing glass-fibre-filled cylinder heads, renewing bent crankshafts, and such work can easily quadruple the hammer price.

“You should buy a classic bike like you buy a purebred puppy,” says my old friend, journalist and historic racer Frank Melling. “After you’ve contacted the breed experts and asked about that particular strain, you need to meet its mummy and daddy, see the owner, find out what’s been done, what the track record is. Only then do you think of handing over money.”

“And never buy for investment,” says Ben Walker, director of International Collectors’ Motorcycles at Bonhams. “Buy because you love it, buy it to ride it, insure it, maintain it, restore it, but don’t expect to get huge returns.”

But aren’t motorcycles as investments starting to heat up?

“Not exactly,” he says. “It’s a stable market at the moment, but we don’t like erratic. So it’s the usual things which are attracting buyers: originality, rarity, few owners, continuity, history, and matching numbers.”

Walker agrees with Tim Harrison that a number of old Brit collections are due on the market soon as older collectors realize the value. For that reason he sees not much potential growth in the value of old British machines. He also agrees that it’s possible to lose a lot of money in the old motorcycle trade.

“A few buyers, perhaps two to three percent, go against our advice,” he says. “And they ignore servicing, don’t start or maintain their machines, and a decade down the line, their machines don’t look as good and they risk losing money.”

I’m not into collections of machines that I’ll never ride, but I’m trying to keep on top of the Norton. Currently it’s at a shop in Cranleigh for an annual service (Phill Sharp, the wizard with old machinery who sold me my Norton, did his best not to laugh when he saw what I’d done to the alternator).

I’ve also bought the old bike a present, but please don’t tell Phill or Mrs. English. Tab II Classics is in the middle of Wales and a day’s drive from my house, but its polished aluminum gas tanks fabricated by Aline Phelps are catnip for caf-racer owners. She learned the craft from her dad, Terry Baker, who hand rolled each tank under the name TAB (hence TAB II), which became something of a Mecca for classic and race machine owners. Her ability at this fiendish art is astonishing and intoxicating. I really didn’t intend to buy one, but when you see her rolling raw aluminium sheet into shape on a English wheel, or the result being gas welded up with astonishing accuracy and speed by Mark Purslow, or polished up to a mirror finish on the linisher by Aline’s husband, Mark, it’s awful difficult to say no—and I didn’t really have the heart!

Perhaps that’s the other lesson to learn from ownership of old motorcycles; your eyes are always bigger than your wallet. 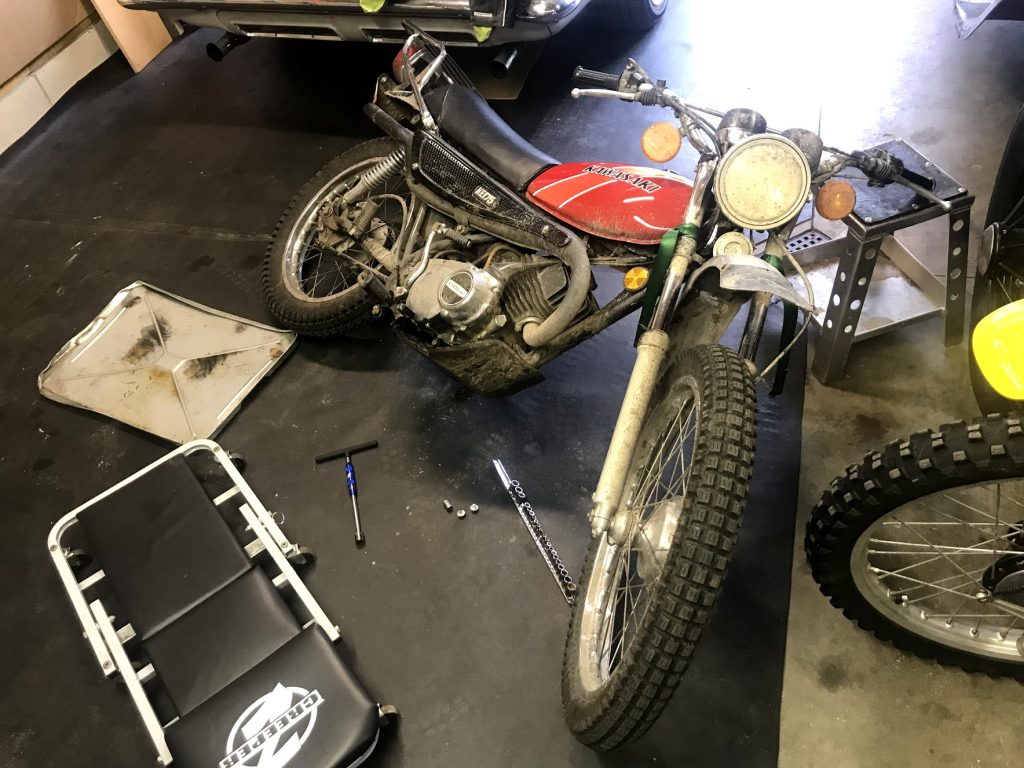 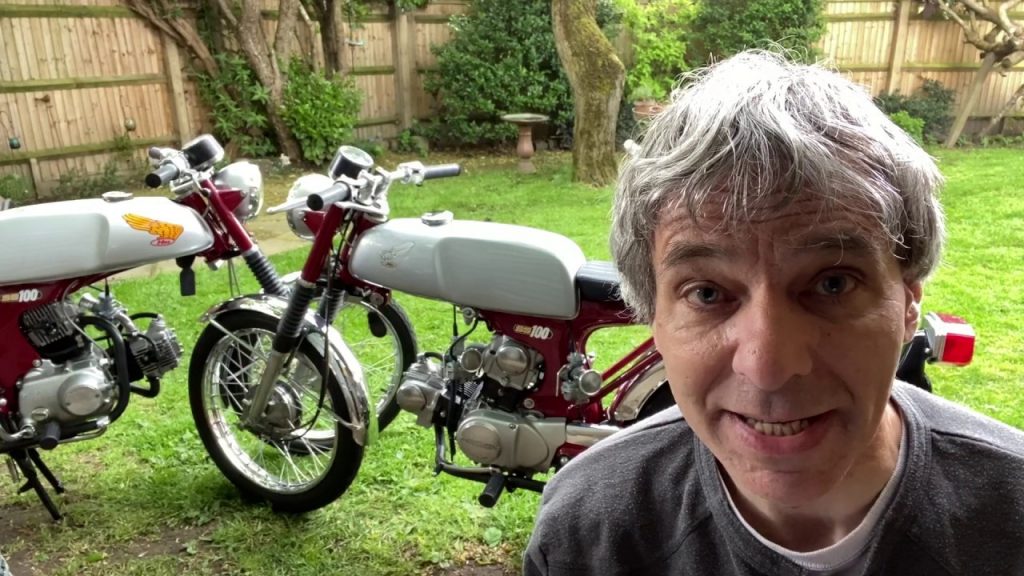 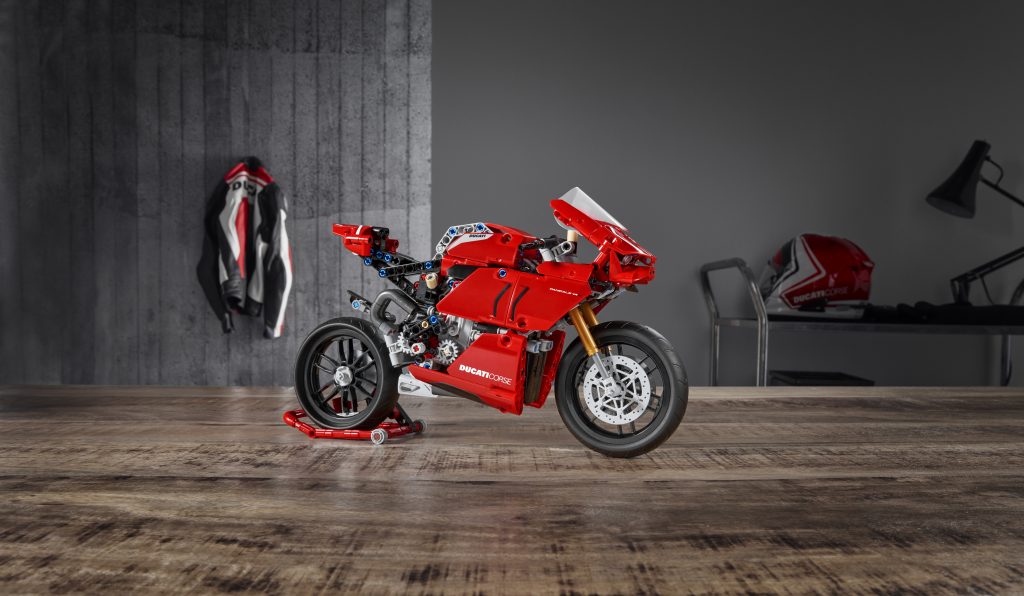 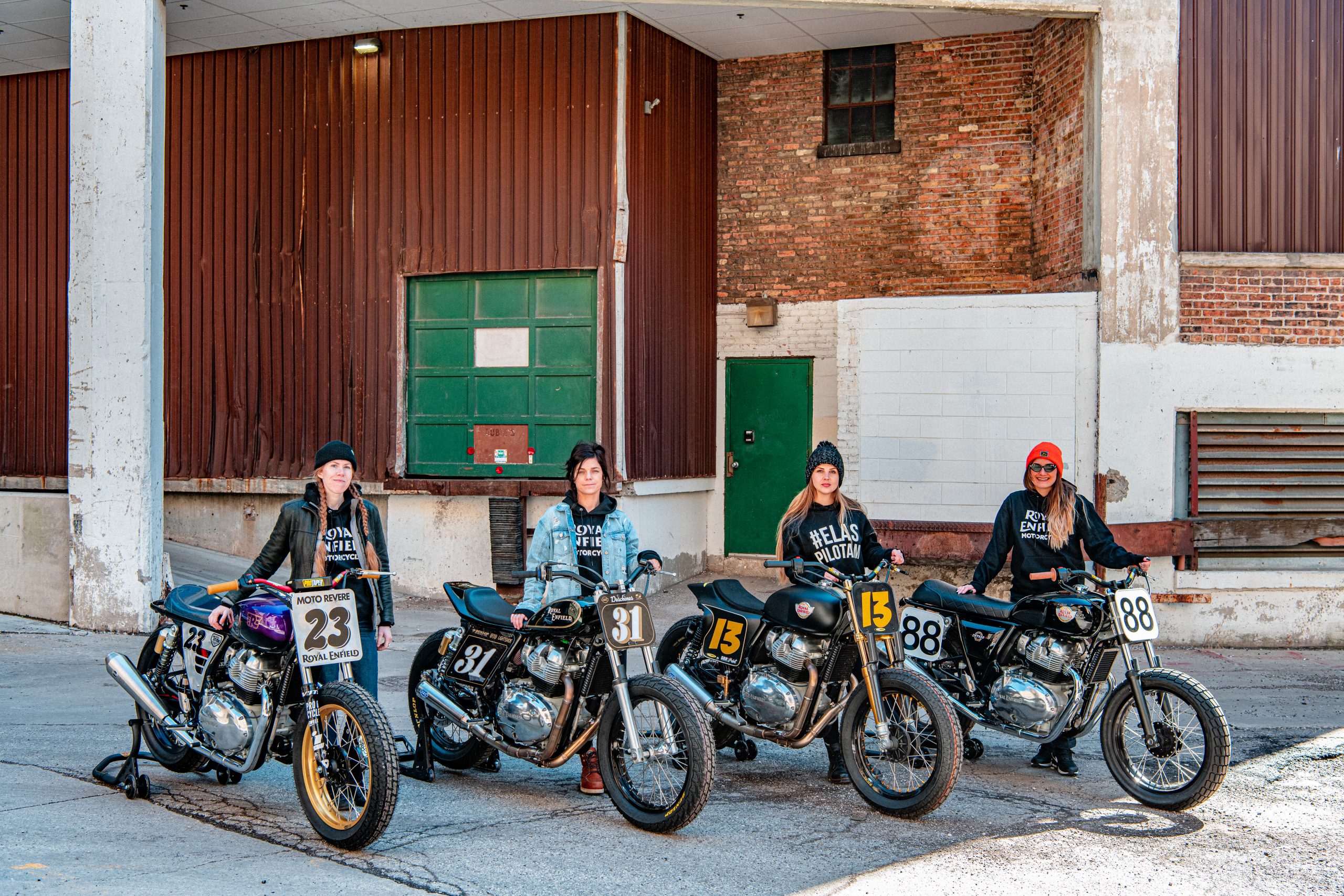 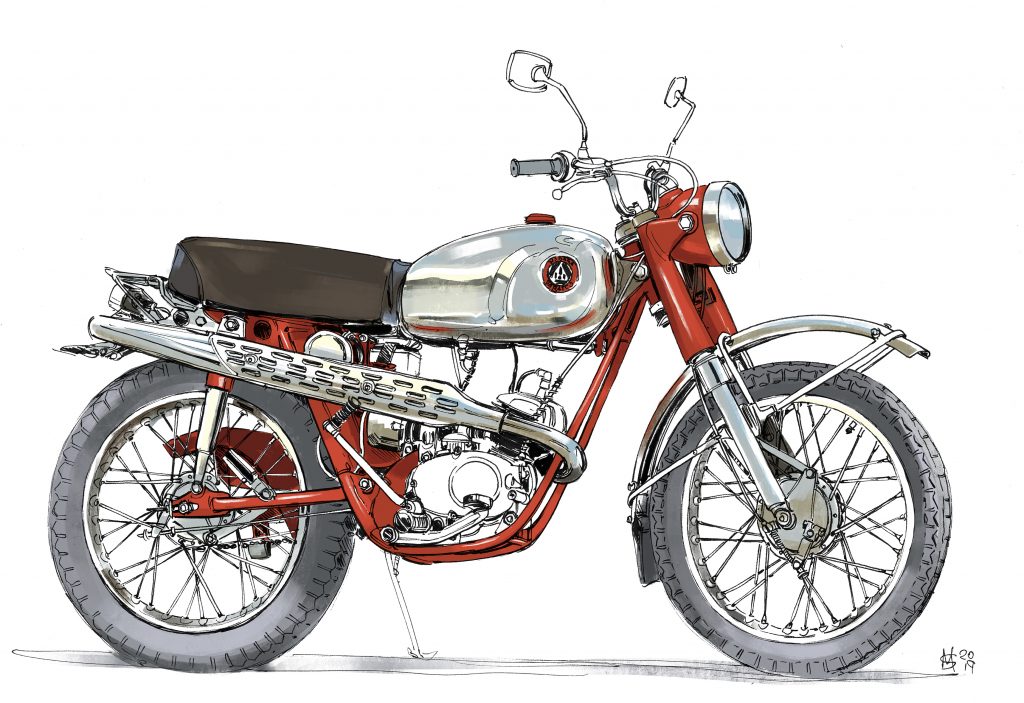