When was the last time you thought of the Ligier JS2? Staring blankly into the ether? That’s hardly surprising. Ligier may have been a force in Formula 1 from 1976 until 1996, but lately the French company has focused on microcars with tiny diesel engines rather than mid-engine fire-breathers.

However, back in the mid-’70s, the JS2 emerged as a proper Le Mans contender available both in road and in race car tune—only to be first sabotaged by Ford, then ruined by the financial troubles of Citroën. Redemption came in 1975, when the factory-backed pair of Jean-Louis Lafosse and Guy Chasseuil pushed their Cosworth DFV V-8-powered JS2 into second place behind the Gulf-Mirage GR8 of Jacky Ickx and Derek Bell (which was, coincidentally, also DFV-equipped). Despite the podium finish, the 1975 24 Hours of Le Mans was the JS2’s last big event in period, as Ligier moved into Formula 1 for 1976.

The adventure began in 1969, when Automobiles Ligier launched the fiberglass-bodied JS1, powered by Cosworth four-cylinders like the 1.6-liter FVA and the 1.8-liter FVC. Weighing under 1750 pounds with 240 hp onboard, the JS1 was a peppy little prototype, but only three were constructed before Guy Ligier moved on to the JS2 for the 1971 season. The JS2 came with an aluminum honeycomb chassis for racing or a standard steel one for the street. The first prototype displayed in 1970 used Ford’s 2.6-liter Cologne V-6, but since Ford had big racing plans for that engine in its GT70, it decided not to supply a French team with a powertrain.

Having modified the rear of the car accordingly, Ligier went to Citroën for the SM’s Maserati-sourced 2.7-liter V-6. This was later replaced by the Merak’s 3.0-liter 191-hp engine, but after the oil crisis hit in 1973, the partnership with Citroën started to show some cracks. Ligier retired from quite a few races due to the unreliable nature of these Maserati engines, and once Citroën was forced to merge with Peugeot, control of Maserati landed in the hands of Alejandro De Tomaso. The Argentinian-Italian master of platform recycling immediately discontinued the old V-6, and with that, the Ligier JS2’s road-going version became history.

However, sponsored by tobacco giant Gitanes in 1975, Guy Ligier got the final chance to enter two factory-backed JS2s at Le Mans, with Cosworth DFV V-8s installed in place of the Maserati engines for a change. That year, those DOHC prototype engines were detuned to reduce fuel consumption, but as you can tell from video shot at the Circuit Paul Ricard during the 2019 Dix Mille Tours, that has since been fixed on this DFV JS2: 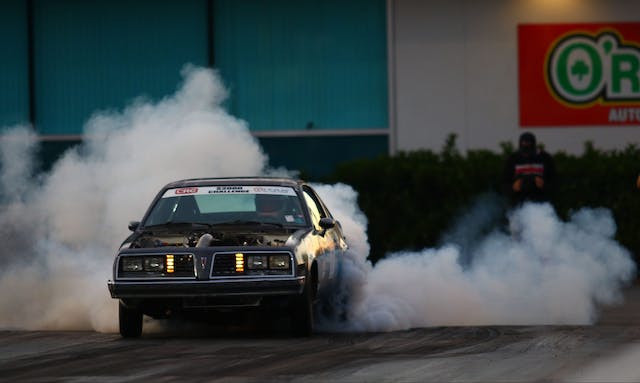