Everyone knows Burt Reynolds drives a black Pontiac Trans Am in Smokey and the Bandit. It’s common knowledge, like the Earth is round and pizza is good.

But Pontiac’s screaming-chicken-emblazoned muscle car has appeared in many films, both before and after Smokey became a blockbuster in 1977. And with big stars behind the wheel, including Steve McQueen, Sylvester Stallone, Clint Eastwood, Jeff Bridges, Chuck Norris, John Wayne, Joan Collins, and, more recently, Will Ferrell and Adam Sandler.

Below is our list of the 10 best movie Trans Ams of all time. Our selections are not only based on the rarity and overall appeal of the cars, but how they appeared in the movie. The more stunts and action the better. Spoiler alert: No. 1 may come as a surprise. (And if you liked this, be sure to check out the 10 Best movie Mustangs of all Time.)

Steve McQueen’s best-known movie car is, of course, his Highland Green 1968 Mustang fastback in Bullitt. Twelve years later, McQueen made The Hunter, which would be his last motion picture. In the film, his character rents a 1979 Pontiac Trans Am. It’s black and gold, but it’s not a special edition, nor does it have T-tops. It does, however, have the WS6 suspension package. It’s also a four-speed, which means it’s powered by a Pontiac 400-cubic-inch V-8. McQueen mocks his car-guy image a bit, as his character cannot manage the Trans Am’s manual transmission. Eventually the car plows through a corn field in a duel with a grain thresher and is promptly blown up with dynamite. A fine send-off.

Don’t confuse this one with Cannonball Run, which debuted five years after this one, although both riff off the famous cross-country race that Brock Yates invented in 1971. In Cannonball, the race is from the Santa Monica Pier to New York City. The main character, played by David Carradine (post Kung Fu), drives a seemingly stock 1970 Trans Am with four-speed, custom paint, and standard Rally II wheels, although he tosses the trim rings. Eventually Carradine crashes the Pontiac when he falls asleep at the wheel.

This terrible movie is essentially one big car chase in and around Los Angeles. Forget about the plot. All you need to know about Zero to Sixty is that Joan Collins drives a silver 1978 Trans Am—hard—through much of the film, including burnouts, power slides, and a considerable jump about three minutes into the film. The car wears the standard Rally II wheels, does not have T-tops, and sounds like it has automatic transmission.

This classic film is not only a good movie, but it’s full of good car stuff. The silver 1976 Trans Am doesn’t show up until the final climactic car chase, which is essentially the final 12 minutes of the film. It wears some odd custom paint touches, including black ribbon flames on its front end and doors, as well as a black scooped hood. Otherwise it looks stock, and it rides on the standard Rally II wheels. It’s unknown if this Trans Am was equipped with the optional 455-cu.-in. engine or the more common 400. Ryan O’Neal stars at the height of his powers, but he’s not wheeling the T/A. That honor belongs the bad guys, with O’Neal giving chase through downtown L.A.

Released three years after the original, Burt Reynolds and his ’stache were back in a black and gold Trans Am. Although much of the magic was gone, there are a few decent driving scenes including a couple of jumps, and the sequel stars a rare 1980 Turbo Trans Am with the Y84 special edition package and T-tops. The car is one of just 3,444 produced of the 50,000-plus Trans Ams sold that year, which was down more than 50 percent from 1979. The Turbo Trans AM was powered by a 301-cu.-in. Pontiac V-8 with a single turbocharger and four-barrel carburetor. It was rated at 210 horsepower.

Pontiac built only 4,802 Trans Ams in 1973. At least one was used in this action buddy film about a couple of thieves. Thunderbolt and Lightfoot, starring Clint Eastwood and Jeff Bridges, opens with Bridges stealing the T/A off of a used car lot. The car is white with a white custom interior, it wears the optional screaming chicken on the hood and the optional Honeycomb wheels. The car appears to be stock, except for a red hood scoop, which looks cool, but is never explained. The car has no engine call-out on the scoop, so we have to assume it was powered by the standard 455 engine and not the optional Super Duty 455, which would have cranked its output from 250 to 310 hp.

Another 1973 Trans Am appears in the 1981 Chuck Norris classic An Eye for An Eye (not the 1996 movie starring Kiefer Sutherland). Norris plays a San Francisco cop and the T/A is his personal ride. It’s a cool piece, Buccaneer Red with a white standard interior, no screaming chicken or any other decals, just a staggered set of aftermarket Cragar S/S wheels with meaty tires. It looks like an authentic street machine from 1981. Again, there’s no engine call-out on the scoop, so it was probably the standard 455 engine under the hood and not the optional Super Duty 455. The post-production sound guys sure had some fun; Chuck’s T/A sounds like a top fuel dragster.

About a year after Smokey and the Bandit created a frenzy for Pontiac’s Camaro killer, Reynolds was back in a Trans Am, only this time it’s Mayan Red and without T-tops. The T/A doesn’t appear until the second half of Hooper, built to jump over a 325-foot gorge. Its backseat is gone in favor of (naturally) a rocket booster, and it wears some deep-dish chrome wheels. Reynolds never actually drives this car, instead he rides shotgun as the Pontiac avoids explosions and falling smoke stacks before jumping the ravine to safety. After the original movie car appeared in Pontiac’s display at the Chicago and Miami auto shows in 1978 it disappeared. Its whereabouts remain unknown.

Smokey was the second-largest grossing movie of 1977, behind Star Wars. Now a full-on classic, it just celebrated its 40th anniversary with a limited re-release in theatres and a week-long celebration in Jonesboro, Georgia, where much of the movie was filmed. Bandit, played by Burt Reynolds, drives a rare 1977 Y82 Special Edition Trans Am with T-tops, 200-hp W72 engine, and automatic transmission. It’s one of just 3,760 built that year. You actually hear the car before you see it, 11 minutes into the movie. Of course, multiple cars were used to make the film, and according to director Hal Needham, not one survived production.

Directed by John Surges and starring John Wayne, McQ also stars a 1973 Trans Am in rare Brewster Green, which was a one-year-only color. The T/A is Wayne’s personal ride throughout the 1974 cop flick, which includes a long and intense car chase with Wayne and his 455 Pontiac chasing bad guys all over Seattle. The T/A wears standard Rally II wheels and the standard small screaming chicken on its nose, although the car’s other decals were deleted. There’s no engine call-out on the scoop, so we’re guessing it was powered by the standard 250-hp engine and not the optional Super Duty 455. It’s driven pretty hard, including some off-roading and a jump. Eventually the T/A gets folded like an accordion between two semis. 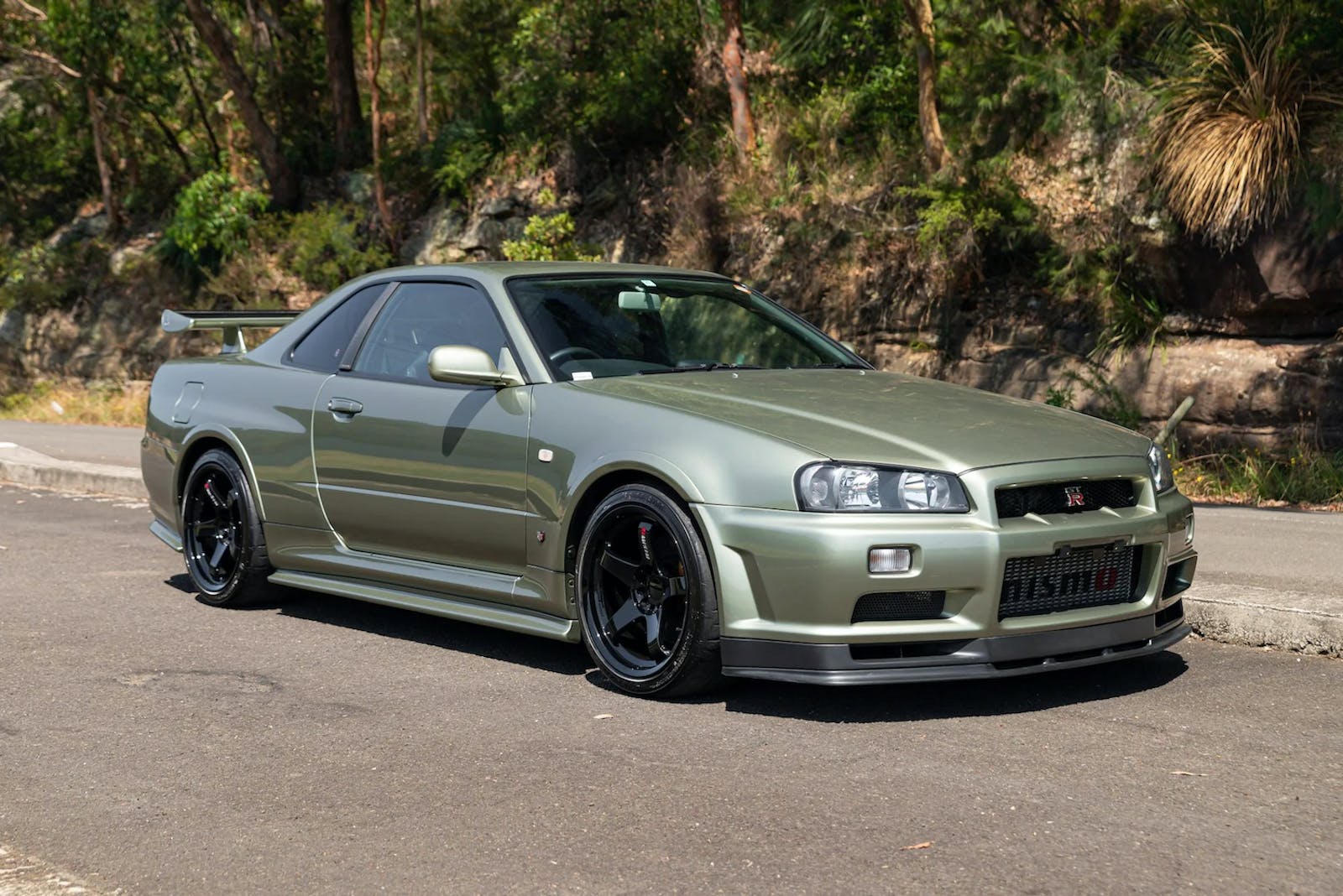 Market Trends We expected this rare Nissan R34 GT-R to sell for a lot more. Here’s why it didn’t
Conner Golden

Get an insurance quote
A Story About
Leave comment
Read next Up next: Watch the Nissan Skyline grow up from cradle to today’s Godzilla