Thanks to the advent of the internet, automotive enthusiasts have never had it easier. Finding project cars, parts, and how-to details is downright simple and allows just about anyone with an inkling of passion for cars to join the community. However, it also allows just about anyone to declare themselves as an expert and spew advice far and wide.

Asking a question in an online forum or community should immediately be followed with bracing oneself for sorting through responses that might be downright ridiculous. To someone new, their “sniff test” is not very sensitive and could thus lead to having a bad time if they follow this bad advice on the project they are working on.

Start with the bodywork

Project cars often come with a litany of problems, from leaks to flaking paint. Some people love a well-worn exterior, while others want a perfect coat of paint wrapping their ride. If you fall in the latter camp, it might be tempting to start with stripping the exterior and doing all the work to put paint on a car. Resist that temptation.

I say this is bad advice simply because paint jobs are expensive (at least good quality ones are), and take a lot of tedious work to get right. If you start here you are going to sink a lot of time and money into a car you aren’t even sure you enjoy driving. Also, a mechanically sound car is easier to sell if needed, rather than one blown apart, in raw metal that needs a bunch of money thrown at it before it can be driven.

Buy all the parts first

I don’t know about you, but I can’t see into the future. Folks who give the advice to buy all the parts you’ll need for a car up front must be able to see into the future, or that advice wouldn’t make sense. The problem here is you don’t know what you will find as you work on your project. Those discoveries will inevitably change the course and scope of your project, meaning that factory-style upholstery kit becomes expensive garage art when you pivot to building a rat rod after discovering more rust that you could have ever imagined hidden under a few panels.

I understand the thought behind this one, but it falls short on delivering. The theory is “buy once, cry once” to prevent the nickel and dime bleeding out that most project cars become. However, you will forget and need items. A better approach is to plan and budget for regular orders of parts, making sure to do you best to order only what you need and in a large enough quantity that shipping doesn’t bleed you dry alone.

Look, we—the collective automotive community—understand that the Chevrolet LS-series engines are amazing feats of small-block engineering. The power and reliably is baked into a nice tidy package that also comes with a fantastic amount of aftermarket support, but that does not mean it is the solution to every engine problem. “Oh, your stock inline-six Mustang has leaky valve seals? You should LS-swap it.”

I won’t sit on a high horse and say it is not a really cool thing to do in some situations. Also, I think this “advice” has transcended into the joke realm, and since there isn’t always a great way to see someone is being sarcastic on the internet the joke is lost from time to time. There is a place for original engines and maintaining both the object and experience as it was when the car was new.

Only buy NOS parts or parts made in the U.S.

Folks love to decry that anything new is crap. “They just don’t make them like they used to” has been a rallying cry since, well, they started making things. In some particular cases there is some truth to the saying, but the vast majority of the time it won’t make a significant difference to your project if you use a new production piece versus one built decades ago.

In fact, most time you are better off with the new piece. Items like bearings, brake shoes, or even carburetor kits don’t always age well on the shelf. Grease dries up over time, corrosion from moisture in the air will set in, and glues will fail. Old parts might look great, but install them at your own risk. 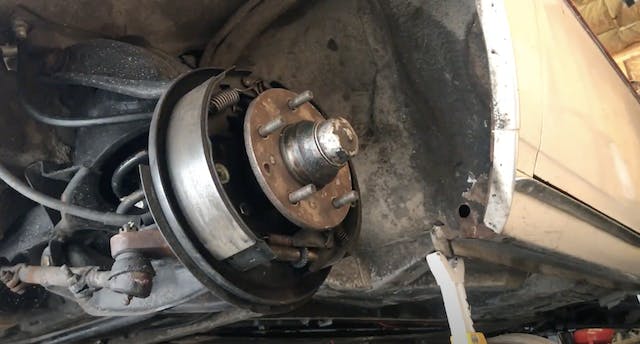 Akin to the LS-swap crowd, the disc brake crowd is vocal about how drum brakes are not to be trusted and how if you want to drive your car you HAVE TO install disc brakes. This is patent hyperbole though. If drum brakes were so bad they would not have survived in production as long as they have. It’s a 100-year-old design that you can still find on dealer lots today.

Properly adjusted and maintained, drum brakes provide plenty of stopping power. Often times it is the tires on your car that will cause longer stopping distances, not the brakes. Remember, if you can lock all four wheels and slide, you don’t need more brakes, you need more traction. The brake fade argument made by many disc brake proponents is a very particular use case and not typical in regular classic car use. All this is completely ignoring the cost and complexity piece that come with modifying your classic with non-OE components.

Have you seen some bad advice? Tell us about it in the Hagerty community below.