Tom Cotter, known for his treasure-hunting exploits through the Barn Find Hunter YouTube series and as the author of multiple automotive books, has grown accustomed to taking the road less traveled. This time around, Cotter and photographer/co-pilot Michael Alan Ross pushed that idea to the limit—and found it deeply rewarding.

“I have wanderlust. I love to travel, and I especially love to drive,” Cotter says. “I can’t sit on a bus with a tour guide; I’d rather be self-guided. I love maps, but a map only tells you how to get there, it doesn’t tell you where to go. You have to figure that out.”

Cotter and Ross recently drove a new four-door Ford Bronco (in Outer Banks trim), towing a Airstream Basecamp 16X camper trailer, from Key West, Florida, to Deadhorse, Alaska. The most direct route would have been about 7000 miles, but Cotter and Ross added nearly 2000 to that number. Along the way they managed to see 17 states, British Colombia, and the Yukon Territory. “It would have been 16 states,” Cotter says, “but we were only three miles from Arkansas, so we decided we had to do it.” Cotter has now visited all 50 states; Ross just needs to see Louisiana to match that total.

While the 8881-mile road trip naturally offered a visual parade of scenery and automobiles, Cotter says the focus of the upcoming book that documents the trip, America’s Greatest Road Trip (set for a fall 2023 release by Motorbooks), will be about the overall adventure of travel and the people that he and Ross met along the way. The key to finding both ingredients, Cotter says, was getting off the interstate.

“We took two-lane roads all the way—no interstates, no cities. You see real America by taking the two-lane roads,” he says. “I’ve come to the conclusion that when you take an interstate, every exit is the same. The same gas stations, the same stores—all generic. But if you get off the interstate and take two-lane roads, you see Main Street America. You experience what real America is like.

“It’s about the people you meet—the waitress in Alabama, the cowboy in Montana, the German couple on a four-year trip around the world, the Israeli driving a BMW motorcycle to Deadhorse, the man walking with his dog from Argentina to Deadhorse, the mother and son riding their bicycles from Billings, Montana. No one on that road was there by accident. I was so happy to sit down with those people and have the opportunity to tell their stories. I’m happy to report there is a lot more out there that unites us than divides us.”

Cotter said he’d been thinking about a trip of this magnitude for years. And although classic vehicles have been at the center of his adventures in the past, he decided to make an exception this time around.

“At first I thought about taking this trip in a vintage car or buying one in Florida and selling it in Deadhorse, but then the trip would be more about the car and less about the people,” he says. “So, I thought, what if I took the car out of the equation? I decided to drive something trustworthy and reliable, and I’m glad I did. The Bronco performed beautifully—and the Airstream was fantastic. So this is not a car book, it’s a road-trip book. It has cars in it, because I wanted to be true to my Barn Find Hunter roots, but it’s not about that, it’s about the adventure.”

With that in mind, Cotter and Ross—who accepted pledges to help Vintage Racers for Rescues, a 501 (c)(3) non-profit foundation that helps raise money for an animal rescue shelter—set off from Key West in mid-May “with no deadline or agenda” while driving to Alaska’s northernmost city.

There was, however, some déjà vu—at least for Ross, who is such a huge contributor to Cotter’s book writing that Tom refers to him as his co-author.

“This is our sixth book together, so we know each other well and work well together,” Ross says. “In situations like this, my job is to just follow Tom around like a fly. I’m documenting where he goes and what he does and what he sees. I shot 11,544 images, and they’ll use 200–250.

“You never know what Tom’s going to latch onto or what will make it into the book, and you can’t ever say, ‘Can you go back and do that again?’ So you shoot everything—and even then I still miss stuff sometimes. Every day starts at the crack of dawn and goes until the lights are out. Since I also do the social media when we travel, and I have a lot of other [tasks to do] too, Tom definitely gets more sleep on these trips than I do.”

Since for much of the trip the two would be “boondocking it,” as Ross calls it, he knew that electricity would be an issue. So he bought a heavy duty River Mobile Power Station, which not only recharged their batteries every day, it also gave Cotter the opportunity to use his computer while Ross was driving. “So Tom could transcribe the notes that he’d just taken and work on his manuscript. I think that was super helpful because his notes were fresh.”

It was definitely helpful. Cotter has already completed 32,000 words of a 50,000-word manuscript. “I’m about three months ahead,” he says.

Cotter and Ross drove from mid-May to mid-June, parked the Bronco and the trailer in a friend’s barn outside Seattle while they went home for a month, and then returned in mid-July to drive the rest of the way. They reached Deadhorse on August 4.

“We spent days and days driving though British Columbia and the Yukon,” Cotter says. “We just couldn’t get over how beautiful it was. I’d go back there again in a heartbeat.”

Allowing his true Barn Finder Hunter persona to come out, he adds, “Once you get into those remote regions, there are lots and lots of old cars. When they break down, there’s no good way of getting them out of there, so they just park them out back. If you want to look for barn finds, British Columbia and the Yukon are great places to do that.”

Cotter was also reminded that the world is a small place. “When I was interviewing the mother and son riding their bikes, we were in Pink Mountain, British Columbia, which claims it has a population of 100 people and 1000 bison. We’re literally in the middle of nowhere, and a guy on a Harley pulls up. After a few minutes he walks over and says, ‘You’re the Barn Find Hunter! I recognized your voice. I watch your show with my son’ … Then another guy walks over, says he watches the show, and asks, ‘You want to see my Camaro?’ It was a really wonderful experience. I was blown away.”

In addition to meeting interesting people, Cotter and Ross saw plenty of wildlife along the way, including bison, muskoxen, elk, moose, eagles, antelope, grizzly bears, and black bears. “You quickly realize this is their world and we’re just visiting,” Cotter says.

Fuel prices ranged from $3.79 a gallon in the southern states to $9.07 a gallon in Deadhorse. “Of course, we only had to pay that once to fill the tank at the end.”

“When you reach the end of the road, there’s this great sense of, ‘We did it,’” Cotter says. “We started at the southern most point on US-1—if you go any farther south you’re in Cuba. And when you reach Deadhorse you can’t drive any farther unless you go into the ocean and on to Russia. I swam in the Gulf [of Mexico], so I wanted to swim in the Arctic Ocean, and I did it. It was like 48 degrees. I joined the Polar Bear Club. I think that was greatest accomplishment.”

Ross says: “This experience was filled with non-stop visual inspiration. From the people we met to the incredible vistas along the way. Just amazing stories, incredible people. It’s mind-blowing what you find if you take the time to look.”

As proof of that, Cotter tells a story about Malta, Montana, located 55 miles south of the Canadian border. “You can see that what was once a thriving little town is kind of a shell of its former self. It looks forgotten,” he says. “I said, ‘Man, if I grew up in this town I’d leave as soon as I was 18 and never look back.’” But then he met some of the residents, and one of them offered to give him a glimpse of life there.

“He brings out a horse for me to ride. I said, ‘I don’t ride horses,’ and he said, ‘You do now.’ Before I knew it, I was riding a horse, wearing my Davidson College sweatshirt, Top Siders, and a ball cap. These people are all cowboys, and they’re rounding up cattle … branding them, tagging them, vaccinating them … Everyone was there; they even hired the local football team to help. It was an all-day activity, and they cooked out and everyone ate together. Then they made plans to do it again at someone else’s place. It was amazing to see.

“I met a guy whose Norwegian ancestors had staked their claim there, and each generation after them farmed the land. While growing up, he wanted to do his own thing, so he went away to college and started a career, but he said he just had to come back. He missed the place … It really set my bearings straight and made me rethink this—just 24 hours earlier I thought people couldn’t get away from there fast enough, then I meet these people who didn’t want to be anywhere else.

“It’s a magical place, and that was one of the most memorable days of my life. It gave me a different perspective. And I never would have experienced it if I hadn’t taken a two-lane road. That’s what this trip was all about.” 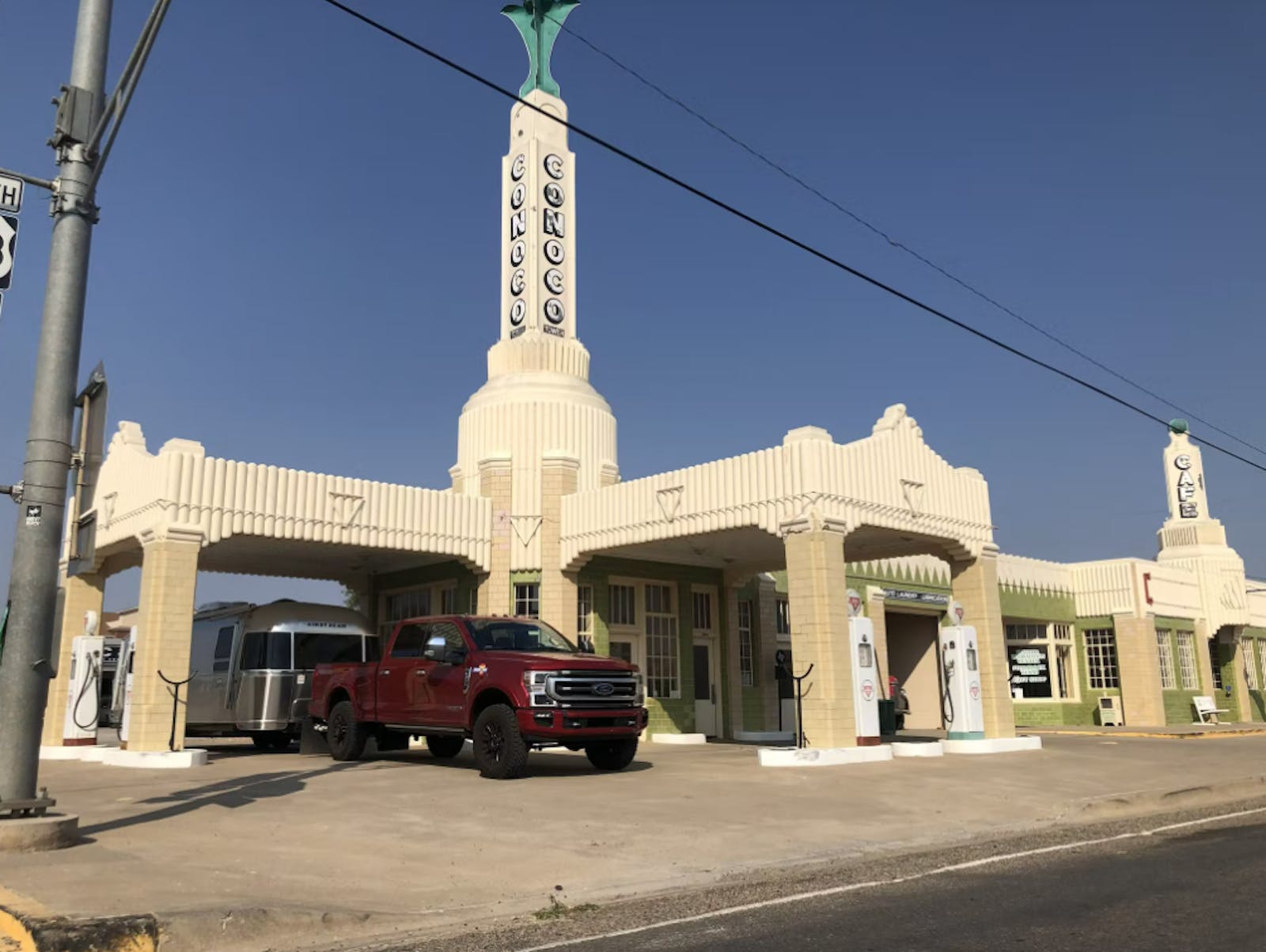 Get an insurance quote
A Story About
Share Leave comment
Read next Up next: Bronco Heritage editions hearken back to 1966 originals