Why isn’t the Shelby Series 1 worth more?

Where’s the love for the Shelby Series 1?

A 397-mile example owned new by NASCAR great Tony Stewart just sold on Bring a Trailer for $175,000. A lot of money, to be sure, but consider for a moment that an “entry-level” worm-and-sector 289 Cobra in #1 (concours) condition can fetch about $1 million.

The sale is just the latest opportunity to wonder what could have been for Carroll Shelby’s late-in-life passion project and what might lie ahead for its value in the collector market.

A long road to Series production

The life of the Series 1 started with so much promise. Shelby, a few years removed from a heart transplant, wanted to cap his unparalleled career with the one thing he’d never achieved—a clean-sheet sports car. “I’m tired of imitations,” Shelby told the Chicago Tribune in 1994. “Folks have put the Cobra name on all sorts of stuff over the years but none of them were Shelby Cobras. Before they throw the last shovel of dirt on me, I want to take one last shot at an honest-to-goodness Cobra.”

For his ambitious new sports car, Shelby needed a reliable partner. General Motors’ Oldsmobile division stepped up to the plate, hoping to capitalize on the power of the Shelby name as it worked on its own comeback. Olds had the right hardware: a 4.0-liter DOHC V-8 that had been developed for the newly formed Indy Racing League. The compact size of the so-called Aurora V-8 allowed it to be mounted behind the front axle in a front-mid configuration. The chassis would be state-of-the art, formed from aluminum. Shelby dreamed not of a throwback to the Cobra but of a modern sports car that would be as revelatory in the 1990s as the Cobra had been in the 1960s.

Little went according to plan. The Indy car engine proved difficult to make emissions compliant, so Shelby was forced to take the version used in the front-drive Oldsmobile Aurora sedan. Meanwhile, his key ally at GM, Oldsmobile chief John Rock, was forced out in 1996, subjecting the partnership to corporate in-fighting. Shelby had initially planned for a Corvette six-speed transaxle, which would have shifted even more weight rearward and created more space for passengers. That didn’t happen, so instead the Series 1 got a six-speed ZF unit modified by Texas-based RBT. To protect the supremacy of the C5 Corvette, GM allegedly also put the kibosh on sharing C5 suspension parts (Shelby opted for the C4’s top and bottom A-arms).

More daunting for Shelby than GM politics was the very task of building a modern, regulations-compliant automobile. His Las Vegas factory struggled to build the cars on time and often did not. Such was the case with Tony Stewart’s Series 1. According to paperwork included in the BaT sale, the three-time NASCAR Cup Series champion didn’t take possession of his “1999” Series 1 until January 2001. 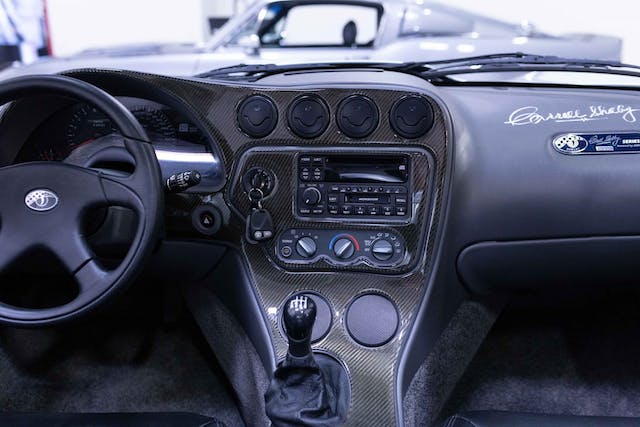 Where things went even more sideways was the price. Shelby promised the car for just under $100K and even took deposits. As it turned out, nobody was able to claim a Series 1 for anywhere close to that. Production difficulties swelled the price first to $134,975 and, by the time Car and Driver was able to test the car in 2000, to $181,824. That price included quality issues and a GM parts-bin interior—but not the supercharger. That cost some $20K extra.

In the end, the price dropped considerably. The bill of sale on Stewart’s car lists the original retail price as $112,290. However, by then the damage to the Series 1’s reputation had been done. Shelby ran out of runway with around 250 Shelby Series 1s produced and, according to our own Colin Comer’s Complete Book of Shelby Automobiles, had trouble selling them all. “Struggles that ultimately delayed production countless times led to one of the most flawed vehicle introductions in history,” Comer writes.

Buried by the production woes is the fact that the car was, at the end of the day, phenomenally capable and fast. The normally-aspirated V-8 was tuned to 320 hp (up from 250 hp in the Aurora), and Shelby offered a supercharger to match the power of the promised Indy engine. He overdelivered with a whopping 450 hp. Weight distribution was 49/51 front/rear—almost unheard of for a front-engine car. An inboard-mounted pushrod suspension significantly reduced unsprung weight and helped the Series 1 maintain nearly 1 g cornering force.

Shelby could have avoided much of the headaches had he simply sold the Series 1 as a component car, with the engine and transmission sold separately, as he had done successfully with the Cobra for years. However, the 17-digit VIN that came with federalization was very important to Shelby. It said he could build a proper production car, just like his bitter rival Enzo Ferrari had. That competitive drive, key to his many successes, ultimately led him to bite off more than he could chew as an ailing septuagenarian. (Shelby eventually did sell a small number of rolling chassis with a seven-digit CSX5000-series serial number. They are generally worth less than the production versions.)

Will Ol’ Shel have the last laugh?

On paper, and in the metal, the Series 1 has all the ingredients of a highly desirable classic: Limited production, outstanding analog performance, distinctive looks. Then there’s the whole Shelby mystique, which amounts to huge premiums on everything from 1960s Ford Mustangs to 1980s Dodge Omnis.

Still, the Series 1 hasn’t exactly taken off. Hagerty Price Guide currently values a normally aspirated, #1 (Concours) condition Series 1 at $159,000—quite a bit less than what most paid new, accounting for inflation. The highest price paid for a Series 1 was $313,000, set in 2018 by the very first Series 1, which was owned by Carroll himself. (Sorry, Tony.)

What’s holding back the Series 1? For some, the issue might boil down to the powertrain. Shelby die-hards love big, powerful engines—427 Cobras are valued 58 percent higher than 289 Cobras, even though many believe that the smaller Cobra is a much better-driving vehicle. The Dodge Viper, a car Carroll Shelby considered a spiritual successor to his Cobra, has a monstrous V-10. The 4.0-liter V-8 in the Series 1 just doesn’t raise hell in the same way. Others might have trouble looking past the GM switchgear and kit-car quality.

The whiff of failure, more than tangible issues with the car, is likely what dampens enthusiasm for the Series 1. Shelby collectors are, after all, buying into one of the greatest success stories in the history of motorsports. The Series 1’s troubled development made clear that Carroll Shelby was far from infallible.

Yet the man known for making comebacks may have one more in him, even after death. Currently, Gen Xers and millennials hold only 15 percent of the insurance policies Hagerty provides for Shelby Series 1s, but they make up 38 percent of the people calling us for new insurance quotes on the cars. In other words, younger buyers—the same demographic driving up prices for Toyota Supras and the like—are anxiously waiting for older Series 1 owners to sell. Values for the car have risen some 10 percent in the last few years. Hardly a spike, but an indication that Shelby’s swing at a ground-up sports car won’t be forgotten.

Meantime, the winning bidder on this BaT sale can enjoy a very fast roadster built by Carroll Shelby and owned by a NASCAR champion for a fraction of what a Cobra costs.

Get an insurance quote
A Story About
Share Leave comment
Read next Up next: Automakers are taking “badge engineering” literally