What two things could be more unlike than cars and buildings? Automobiles are concerned with motion, architecture with the fixed and immobile. Leave it to Frank Lloyd Wright to draw parallels—and connections—between the two.

You may already know that America’s most celebrated architect was a serious car guy. However, Wright’s appreciation of automobiles went beyond a well-stocked personal garage. The never-realized Gordon Strong Automobile Objective, a structure whose design would later influence one of Wright’s most famous buildings, reflects just how deeply he saw the automobile integrated into human society.

As might be expected of someone with his level of professional success, Wright owned and drove vehicles that resonated with his ideas of design and elegance—Jaguars, Cadillacs, Mercedes-Benzes, and Packards—but luxury and elegance weren’t his only automotive interests. He considered the original Lincoln Continental to be the most beautiful car ever made, though that didn’t stop him from customizing 1940 and 1941 Contis to his own taste. Wright liked open cars. He owned two different open-roof Cord L-29s (a phaeton and a cabriolet) and a 1953 Bentley R-Type convertible. Wright was also a bit of a sports car buff, having owned a 1937 16/80 Competition Sports model from AC (better known as the progenitor of the ACE roadster that Carroll Shelby turned into the Cobra) and a total of five 1949 Crosleys, including a Hot Shot, a model considered by many to be the first genuine American sports car. Many of the architect’s automobiles were painted in his favorite color, Cherokee Red.

Wright’s automobiles got plenty of use. After setting up winter quarters at Taliesin West in Arizona, Wright would commute twice a year between there and his summer home in Wisconsin, employing his students—”fellows,” as he called them—to ferry his fleet of cars between the two locations.

It’s uncertain whether Wright was widely recognized as an automobile enthusiast in his own day, but when Gordon Strong (1869–1954), a successful Chicago attorney with real estate interests in Illinois and in Washington, D.C., became enchanted by Maryland’s Sugarloaf Mountain and wanted to build a tourist location for motorists on the promontory’s peak, he contracted with Wright in 1924 to render the design.

Strong had bought the mountain and surrounding real estate, hoping to build a resort to attract urban motorists from nearby D.C. and Baltimore who were eager to escape the urban hubbub. He had a road built to the summit, with a series of overlooks to take advantage of the remarkable vistas. Strong’s plan for the facility was to “serve as an objective for short motor trips on the part of residents of the vicinity,” and the project was named the Automobile Objective. In addition to sightseeing, Strong wanted the Objective to offer dining and entertainment. The design brief he gave Wright was threefold:

1: To be striking and impressive so all that hear of it will want to visit.

2: To be beautiful and satisfying, so visitors will want to return.

3: To be enduring, a permanent monument.

After taking the commission, Wright wrote to Strong, “An automobile ‘objective,’ I take it, should make a novel entertainment out of the machine in normal use.” Explaining his use of spiral ramps, Wright said that they allowed for the “movement of people sitting comfortable in their own cars … with the whole landscape revolving about them, as exposed to view as though they were in an aeroplane … The spiral is so natural and organic a form for whatever would ascend that I did not see why it should not be played upon and made equally available for descent at one and the same time.”

The design was definitely striking and impressive—you might even call it beautiful, if Wright’s work is to your taste—but the Gordon Strong Automobile Objective was not at all enduring. In fact, the proposed facility was never built. Despite the fact that it only exists on paper, the facility and its creators’ plans for it illustrate just how dramatically the automobile had changed society in just two decades since Henry Ford and Ransom Olds started selling motorcars. Strong was a man of conservative tastes in both art and architecture, so his choice of the modernist Wright may sound a little odd. The men did eventually butt heads over Wright’s designs, but Strong shared with the architect an appreciation for modern technology. Strong’s writings indicate that in Wright the businessman recognized an artist, a dreamer who could render something new and fantastic—which is exactly what Wright created, at least on paper.

Unfortunately for the building, what Wright came up with might have been too fantastic.

Wright envisioned a multi-purpose facility that would attract a variety of guests. Some would stop simply for the views, while others would want to picnic while enjoying the scenery. The layout included snack bars and full dining facilities along with two dance floors and a small number of bedrooms for overnight visitors and staff. Open-air terraces, covered galleries, and enclosed rooms provided various degrees of all-weather accommodation for up to a thousand visitors.

Wright’s circular ziggurat included an ascending, clockwise ramp and a descending, counterclockwise one layered beneath the first. The original plan was to fill the inside of the structure with a theater, but that concept morphed into a large, domed planetarium.

As with his other designs—most famously, Fallingwater, the Kaufmann house in Pennsylvania, which is built around a waterfall—Wright wanted the GSAO building to be fused with the landscape itself. Strong wanted the structure placed at the peak of the mountain, but it was Wright who chose the precise location, extending the building out over the summit’s cliff. Wright also implemented his characteristic melding of nature and structure with a sunken garden on the northern terrace and planters and flower boxes on the southern terrace. At the spiral’s apogee Wright placed a roof garden. His drawings also show vines trailing down the concrete walls from the balconies and parapets plus terraced gardens on the contiguous triangle tower. The building was to become part of nature.

It took Wright almost a year to complete the design. In August of 1925, he made a formal presentation to Strong and his fellow Chicago businessmen. However, though the design brief intended to supply visitors with a “satisfying” experience, the proposed building’s patron was anything but satisfied. In a scathing letter to his architect, Strong wrote:

Your proposed “automobile observatory” impresses me as just that. As a structure of complete unity and independence, without any relation to its surroundings. It looks to me as it were designed to be used anywhere in the United States—on any sloping hill or mere raise of ground.

The businessman compared Wright’s work to the Tower of Babel, sending him a drawing—perhaps in imitation of Pieter Bruegel the Elder (shown below)—of that biblical structure, mocking the architect’s concept of “organic integrity” with a building’s environment: 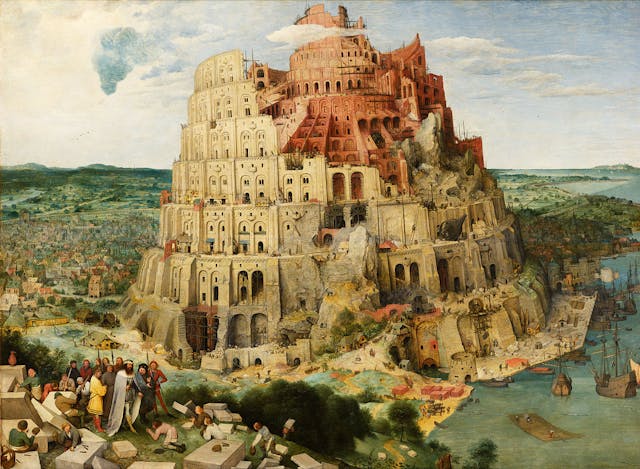 “Perhaps the particular view which I have of the Tower of Babel may not be in your collection … You will note in the foreground a gentleman who, according to the Bible, lost his voice, and, according to the picture also lost his shirt: in endeavoring to explain that the structure under way possessed one thing anyhow—organic integrity. But the more he repeated the phrase, the less his hearers understood him. Finally, their understanding became so mixed that they did not understand each other. Which was the end of the first attempt at an externally ramped automobile observatory.”

A lesser artist might have meekly complied with his patron, but Wright responded acidly, defending integration of the design with the site and implicitly criticizing his patron’s architectural conservatism:

“Knowing your considerable capacities as I do I found … a new one—that of an actor, an actor in love with his own make-up—standing upon a stage built by himself. I hesitate to distribute the underpinning of that stage and spoil a clever if superficial conceit.

But why the ponderous precedents [the comparison of Sugarloaf design to Tower of Babel] and omit … the fact that every carpenter that drives the screw proves me up. I have found it hard to look a snail in the face since I stole the idea of his house—from his back.”

I have given you a noble “archaic” sculpted summit for your mountain. I should have diddled it away with platforms and seats and spittoons for introspective or expectorating business men and the flappers that beset them, and infest the whole with “eye”-talian squirt guns and elegant balustrades … leaving the automobiles in which they both now really live and have their beings, still parked aside—betrayed and abandoned as usual.

Wright was intent on making the automobile the objective of the Automobile Objective.

While Strong’s rejection of his design was a bitter disappointment, the commission did give Wright the chance to experiment with new forms, and he used those forms in other project drafts—though it appears that only one design achieved reality. Wright’s spiral ramps reappeared in the community center of his conceptual Broadacre City and in two 1947 projects commissioned by Edgar Kaufmann, the same man who commissioned Fallingwater.

None of the three were ever built, but that didn’t stop Wright from resurrecting his spiral ramps for two more unbuilt projects: his Self-Service Garage and the proposed Point Park civic center. The latter was supposed to include a theater, planetarium, and aquarium; essentially, it was a scaled-up Automobile Objective. A decade later, Wright rendered another never-built variation on the ramp theme: Baghdad, Iraq’s Opera House and Garden which, he claimed, harkened back to the Garden of Eden.

Not until 35 years after he sketched the rejected Gordon Strong Automobile Objective would Wright’s ziggurat see the light of day. In 1959, he literally turned the design upside down to create one of New York City’s icons, the Guggenheim Museum.

The George Strong Automobile Objective exists only on paper—in Wright’s original drawings archived by the Frank Lloyd Wright Foundation. Recently, however, Spanish architect and graphic artist David Romero, whose project “Hooked On The Past” recreates historically significant architectures of prior years using 3D modeling techniques, rendered realistic images of how the GSAO would have looked had it actually been created. Romero and the Foundation have graciously given Hagerty permission to reproduce those images, as well as Wright’s original renderings, for your enjoyment and edification.

One of my favorite categories of special-interest automobiles is what I like to call “one of nones”: cars built to honor conceptual automobiles that never actually existed. Peter Mullin’s Bugatti 64 or the Fleetwood Catalog Cadillacs that Fran Roxas has built come to mind. Perhaps someday, an architecturally-inclined automobile enthusiast will do the same for the Gordon Strong Automobile Objective. The plans are ready and waiting. 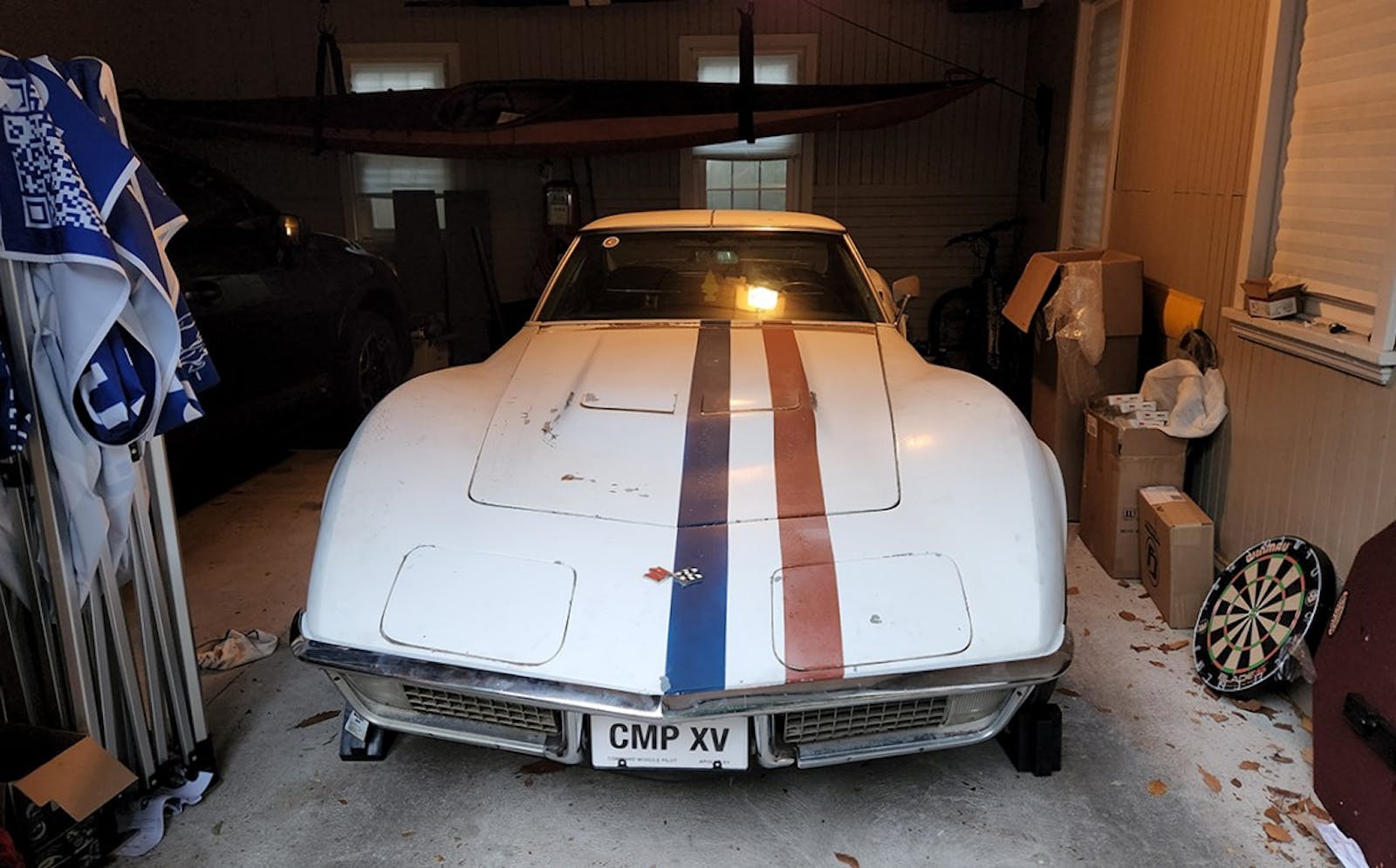 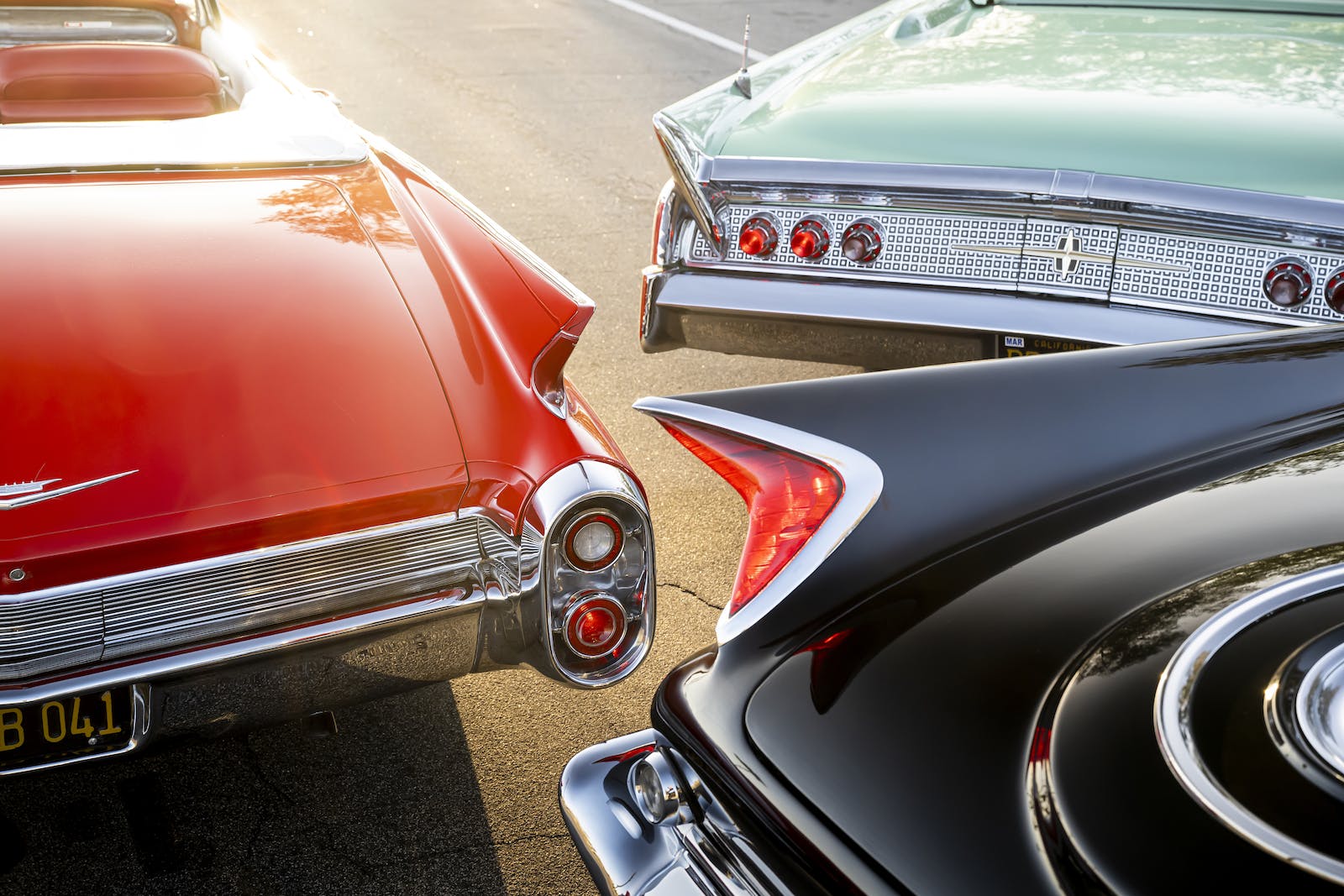