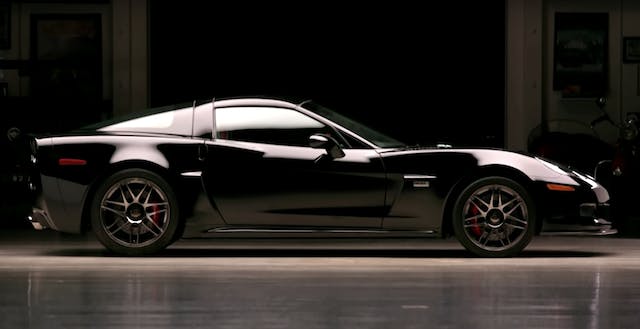 In 2006, the top dog Corvette was the race-bred Z06 powered by the 505-hp LS7. That 7.0-liter mill brought big-block displacement to the LS engine family and fantastic performance to the Corvette lineup. It was just a starting point for Pratt & Miller, however.

If you’re familiar with endurance racing, you’ll likely recognize the Pratt & Miller name. Ever since the C5.R program first tackled the 24 Hours of Le Mans in 2000, Chevrolet has asked Pratt & Miller to turn factory Corvettes into endurance champions. The firm has delivered race victories at home and abroad. To celebrate its racing success and give Corvette Racing fans a street version of the world-beating racer, Pratt & Miller built seven C6RS models for 2006. Jay Leno bought the first one.

In the latest episode of Jay Leno’s Garage, Jay takes a look at his immaculate example and walks us through the many changes that make the car so special.

Each of the seven C6RS cars began with a Z06 and its wider stance. The factory hood, fenders, and quarter panels were replaced with carbon-fiber pieces with unique styling and even wider flares. The composite panels shed some weight, but there were other benefits to the new panels: The hood has a heat extractor, and the fenders feature louvers to reduce lift.

A street-tuned adjustable suspension puts a C6RS an inch and a half lower than a factory Z06 but the driver can raise the front end about three inches to help clear speed bumps and steep driveways. The big-block monster rides on wide, center-lock BBS wheels to fill the fenders with plenty of rubber. It needs the grip, too, because the upgraded Vette packs 600 hp from a hand-built V-8. Katech handled the engine work and replaced the 7.0-liter LS7 with an 8.2-liter V-8 that uses a monster 4.6-inch stroke. 600 hp from a naturally aspirated engine is impressive now, but not even the Viper was producing that kind of power in 2006, and the Dodge had two more cylinders’ worth of valves to help its output.

The Pratt & Miller team extended its modifications to the C6RS’ interior, wrapping the dash and door panels in leather and adding new seat upholstery. Each C6RS also got additional insulation to improve its touring car potential and tame the big V-8’s exhaust sound and heat.

Jay takes the car on a cruise around his Burbank garage and, while he’s gentle on his all-original car and its 14-year-old tires, you can still get a feel for the Vette thanks to the awesome sounds it makes.