Head of the Class

AS AN assistant professor of technology at McPherson College in Kansas, Michael Dudley is teaching the next generation of automobile restorers the skills they’ll need to carry the industry forward. Here’s the really cool thing, though: Michael Dudley also happens to be part of the next generation. At just 33, he is one of the youngest professors at McPherson. And he was helped along the way with a grant from the Hagerty Education Program at America’s Car Museum (HEP).

Dudley grew up with cars, working with his dad on the family’s 1969 Pontiac Custom S. What caught his eye — on the Pontiac and in every car he encountered at shows — was a great interior. “I love the clean lines of an interior,” he says, “the different materials and textures and colors available. That’s always been interesting to me.”

Armed with a degree in architecture from the University of Nebraska, Dudley found work in 2007 in Nashville, though the job failed to ignite his passion. Then he learned about the auto restoration program at McPherson. Moving to Kansas with his wife put him on his current path.

What Dudley found at McPherson was an alignment of his passion and skills, and he remains appreciative of the HEP grant: “It allowed me to pursue my dream,” he says.

Following graduation, Dudley moved back to Nebraska, where he worked at Terry Worick Restorations, before opening his own interior shop, Flatwater Restorations, in 2012. He remained in touch with the faculty of McPherson. “I let the department chair know that if he felt I was qualified to teach, I’d love to come back.” In spring 2014, the Automotive Technology department had an opening, and Dudley applied. Today, he can’t imagine a better job.

“I’ve enjoyed getting to know the students personally,” he says. “And it’s fun to see their skills and their knowledge of the trim and upholstery aspect of restoration grow.”

Though the processes for interior restoration haven’t changed much over the years, Dudley recognizes that given his relative youth in the industry, he has much to learn, so he’s made a point of connecting with some of the top restorers in the country. This includes working with trimmers at Paul Russell to learn their techniques for Mercedes, getting firsthand experience with Duesenbergs in Oklahoma, and staying in touch with previous McPherson instructors to pick their brains when needed.

It would seem that Mike Dudley has found his calling, which is great news for our industry. No one is poised to drive the classic car world forward better than he — not just through his own restoration work, but through the great work he’s doing in the classroom. 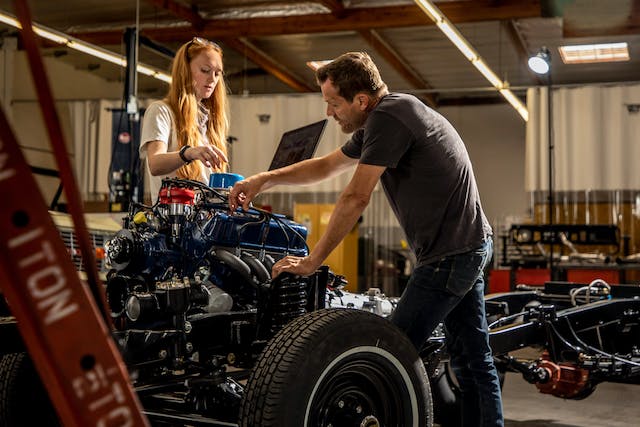