Hello there! My name is Adrian Clarke. I am a professional car designer, earning a degree in automotive design from Coventry University and a Masters in Vehicle Design from the Royal College of Art in London. I worked for several years at a major European OEM. and in the Nineties, I daily drove a 1979 Ford Thunderbird while living in London.

I’ve been writing design articles for Hagerty these last several months (you can find them here) and it’s my pleasure to welcome you to my new column: Vision Thing. In the media there seems to be a lack of understanding about what car design is, why it’s important, and what it contributes to the stories of the vehicles we love so much. Here, we will talk about a lot more than how to draw pretty cars. We will cover design history, philosophy, influence, analysis—the sort of subjects from the sort of perspective you aren’t likely to find elsewhere. It’s, well, a Vision Thing.

Sir, are you sure you want a truck?” the man behind the SFO airport car rental counter inquired as I attempted to pick up my reservation.

I am sure, yes. I am also tired, cranky, achy, and in desperate need of a beer after spending better than ten hours packed in a flying death tube.

“If you’re going to be spending time in the city, a truck is not really suitable.”

A decade earlier I spent a week coaxing an asthmatic 2011 V-6 Mustang rental up and down the hills of downtown San Francisco, visiting locations where Bullitt was filmed. By the time I was done with it the transmission was making a funny smell and the brakes had a perma-squeal, neither of which fully disappeared on the remainder of the trip, which took me all the way out to a boneyard in Arizona and back.

This particular trip had a romantic element, developed over six years of phone conversations, 3:00 a.m. transatlantic FaceTime calls and two previous visits. I do like doing things the hard way.

“I’m so excited you’re coming to visit again. What kind of car have you rented?” she asked on the last call before I left. “A full-size truck” I grinned. “Are you insane?” she blurted. With hindsight, this reaction was probably more about appearances than practicalities.

My paramour lived an hour south of the San Francisco, in the Silicon Valley area. We’d only be visiting the city occasionally for nocturnal entertainment, and as I was going to be there for nearly a month, I had floated the idea of a road trip somewhere out of state. A truck would be perfect, if only to confirm my long held suspicion that the All-American Automobile, with accessible power, all-day comfort and acres of space had morphed from body-on-frame V-8 sedan to body-on-frame V-8 pickup truck.

“Sir, I can put you in a Dodge Challenger for a couple of bucks more a day.”

“Is it a V-8?” I asked grumpily, not really in the mood to be buggered about or to repeat my previous V-6 experience.

Back when I was young and stupid (as opposed to old and stupid now) my first American car was a 1971 Plymouth Duster 340. Lime Light green, a wicked stripe package, and too much power with none of it directed at the brakes (nor the steering) where it would have been helpful. Compared to its uptight Ford and GM peers, a Mopar’s outsider status appealed to me, being very much an outsider myself.

In the SFO rental lot, the little details immediately endeared: a month’s worth of luggage disappearing into the trunk, the race track rear light graphic, and the flare of revs on start up before settling back down to idle. All of it a modern imitation of the crank-it-and-catch-it-as-it-fires routine that came as standard with those old muscle cars. Southbound on the 101, the metallic gray Challenger and I got along just fine. A honking V-8. Great visibility—useful when blearily making the brief adjustment to driving on the other side of the road. An interior layout that helps rather than hinders. Tied-down ride quality. Apple CarPlay. What more, honestly, do you need?

Around the time calendars were flipping over to the frightening-sounding year of 2000, OEMs blew the dust off their back catalogs in search of time machines to return consumers to a more certain past. Retro was everywhere from the mid-Nineties. Chrysler itself started with the Prowler Concept in 1993, and after a churning out a load more finally got around to debuting the explicitly Not For Production Challenger concept at the 2006 Detroit Auto Show. Awkwardly, this was the same show at which the fifth-generation Camaro concept appeared. At this point the fifth-generation Mustang had the market to itself for a period of two years.

It’s telling that all three of these modern remixes took their inspiration from their first-generation models. You always remember your first time. Besides, no one is going to buy a modern version of the Mitsubishi-in-drag second-generation Challenger. The Mustang pulled off the weird trick of simultaneously looking blocky, modern and retro. Retro gets a lot of stick from the commentariat as being lazy, but where I fall out of bed a bit with this line of thinking is that “who is to say that this isn’t what these cars would have looked like had they remained in production?” (Mustang aside.) Retro, or “heritage” design is like everything; it can be done badly or well. And in the case of the Challenger it was done very, very well.

In any creative endeavor that explicitly references existing source material, the key is always “what to leave out?” Removing the utter non-essentials provides clarity and simplicity. The 2006 Challenger’s master stroke is not slavishly copying every detail from the original. Instead, designer Mike Castiglione concentrated on what was important—clean modern surfacing with a typical muscle car volume, tweaked to fit over bulkier twenty first century hard points, leaving the quad head lamps and full-width taillights to do the retro heavy lifting. The fact that you can, today, go and buy essentially the exact same car nearly fourteen years later is testament to how right the 2006 design was. But even that is not the most impressive part of the current Challenger story.

It’s actually increased in sales in the years since 2008, the first year it was available to buy. It currently sits at around 65,000 units a year, up from around 20,000 at launch. The normal life cycle for a car is about seven or eight years, with a facelift (gently termed a “mid-cycle refresh” in the industry) at about three or four years in. The Challenger had its minor refresh at seven years old in 2015. These are done to keep a car in date; the Challenger is so successful because it was never really up to date in the first place. As the Mustang and the Camaro have morphed into try-hard sports car caricatures of themselves chasing numbers on a track, the Challenger succeeds by sticking to why people bought these cars in the first place—everyday usability with attitude.

By covering every base from secretary special to road burning hell raiser, there’s a Challenger for everyone. Product planners and marketing teams love this stuff—lots of versions off the same basic sheet metal, with lots of profitable options packages. In simpler times when everything was RWD and platforms were not so tight for space, it was a matter of course to swap in different powertrains and trim levels—Plug & Play twenty years before the term was invented. The current model has transcended—going from “how do we replace it” to “why would we replace it?” The platform is long since amortized—at this point and at these volumes, it’s literally printing money.

Automotive history is littered with cars that stuck around past their expected lifespans. Live long enough to become the villain and the market eventually circles back because you offer something no one else does. When Land Rover announced that the original L316 Defender would be going out of production in 2016, sales doubled for the final two years of production. Today in the U.K. it’s about a depreciation-proof car as it’s possible to buy; values of used ones have gone bonkers, despite the fact by any objective measure they are rubbish. The original 911 stuck around for years because like the Defender, there wasn’t the money to replace it. It outlived its supposed replacement and like the Defender was finally killed by legislation.

But within the automotive Borg that is Stellantis, there is another car like the Challenger, seemingly immune to death, irreplaceable and positively coining it in: the Fiat 500. Now before you all jump in to eviscerate this statement in the comments, I know it was not a success in the U.S.. That’s not surprising, because not being designed for the North American market will do that.

But in Europe, where it’s crowded, gas costs over $7 a gallon and we’re a bunch of fashion victims, the story is a little different. The 500 pulls the same trick as the Challenger by covering the spread from 1.0-liter hybrid runabouts with steel wheels to town-center-terrorizing Abarths with twice the power, aluminum panels, and buzzing exhausts. Sensitive updates since its arrival in 2007, coupled with clever marketing playing on its boutique appeal, amounted to Fiat absolutely nailing the retro brief for a funky city car. In well over a decade years it’s had a minor refresh, but truncated first year aside over 150,000 units a year find homes across the continent. When time finally came time to replace the 500, well, Fiat didn’t. Instead we got a new electric-only model, and Stellantis currently sells both alongside one other. Somewhere deep inside the Borg, someone clearly knows a good thing when they see it.

Rumbling around the Bay Area in that Challenger never got old. On-ramps and gaps in traffic became opportunities for eight-cylinder mischief. It needed filling up a little more often than I would have liked, but then again, even California gas prices seemed cheap to me. I was genuinely sad to hand it back after a month of bonding. Perhaps the perfect All-American Automobile did exist after all.

On my next visit I rented an 2019 EcoBoost Mustang. That turned out, like the relationship, to be somewhat less than it appeared. And I still haven’t had a go in a pickup. 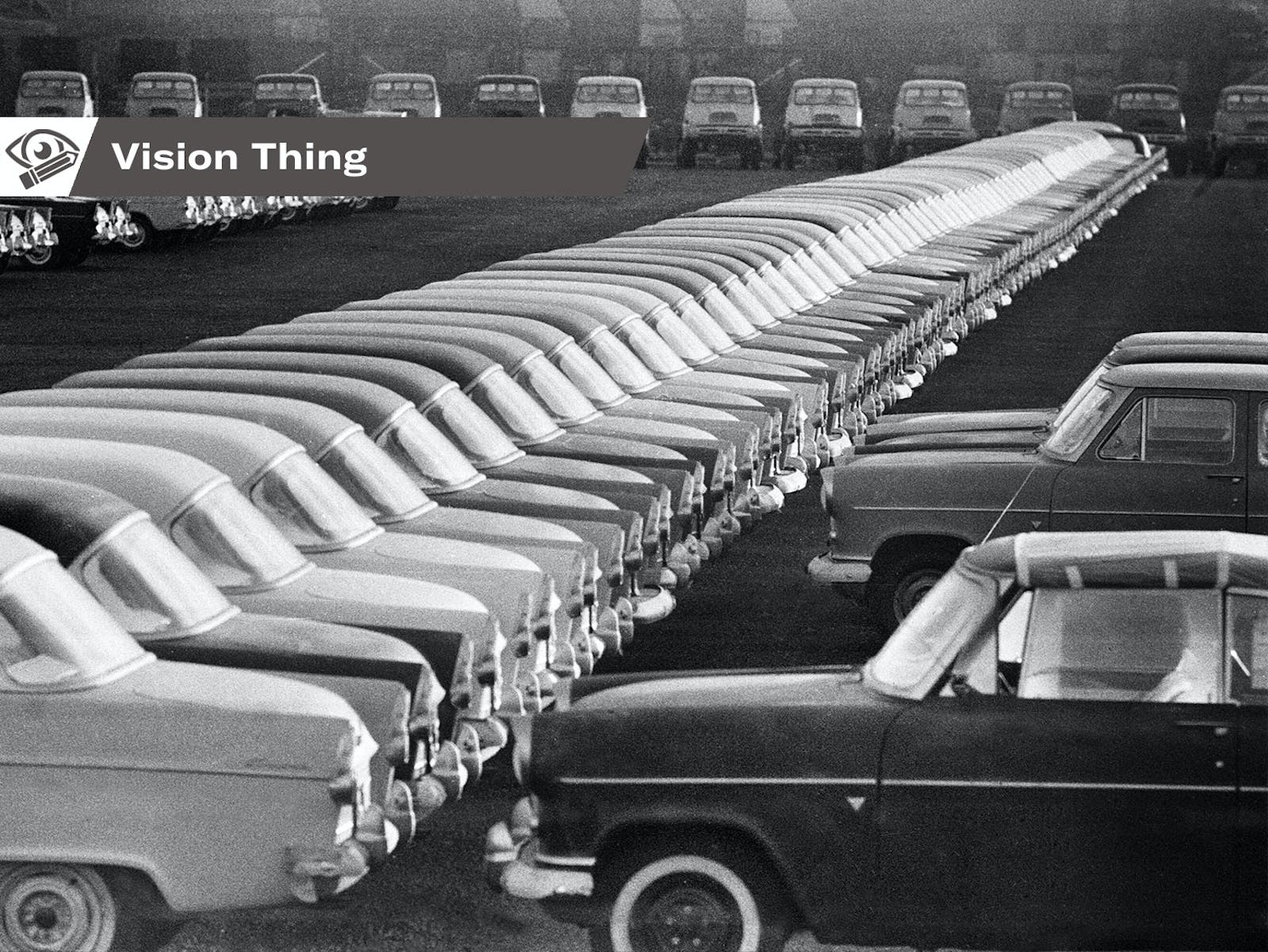