The $80,000 Lamborghini Murcielago is much worse than I expected

Having already been lured into buying, sight-unseen, that Lamborghini Murcielago from The Fate of the Furious in part one of this story, I was finally in California, ready to collect my prize. It was not pretty. Or a prize. Or safe. It did run, which, as it turns out, was both promising and terrifying.

A cursory glance around the car revealed the reasons why it was listed at 50-percent-off market value, reasons that were as numerous as they were confusing. Any prospective buyer would likely turn their prospective butts around and walk away from what would be best described as a parts car, feeling confident that they dodged a bullet. But not me.

Since the car was mainly used in scenes shot in Iceland on a frozen lake, the front and rear bumpers were fiberglass copies of aftermarket units that were made in-house, because they kept breaking on what I would assume were icebergs. The quality of these bumpers was extremely suspect, and the fitment would be considered good only if you had no working understanding of what the word “fitment” or “good” actually meant. The car’s Arancio Argos paint job was rushed to meet the demanding production schedule, so it had some pretty ghastly runs on almost every body panel.

However, the shining beacon upon this lighthouse of excrement was the interior. On a good day, the Murcielago’s interior was little more than a cramped coffin with some pedals randomly placed and a steering wheel that was very nearly in front of you. This car took the key elements and expanded on them by not only making the interior more claustrophobic, but infinitely more dangerous.

To kick things off, the airbag and traction control systems were disabled so the car would slide and not potentially injure Tyrese Gibson’s face in case a crash did occur. A full custom roll cage was bolted into the car, which was, I assume, an insurance requirement for the actor, since the other stunt cars and kit cars didn’t have this addition. What this meant was that the back window was missing, and two thick roll cage tubes leading to the engine bay took up that space instead.

In addition, the driver’s side door window was not able to be rolled down because the window regulator had broken, prompting one of the techs on set to prop up a piece of wood to keep the glass in its place.

Also, the car had a straight-pipe exhaust, which meant the 6.2-liter V-12, on top of producing nearly 600 horsepower, made an eardrum-destroying howl when given any throttle, and in turn, produced so much carbon emissions that it now has its own Netflix documentary. To summarize, the exhaust was extremely toxic, the rear window was missing so the fumes would come in, and you couldn’t roll the window down to get any fresh air. Oh, and the door handle was missing, so you couldn’t get out unless someone opened it for you. The airbags were disabled, but that wouldn’t matter because the roll cage was so close to your head that any impact would convert you into a corpse faster than if there were a bomb in the trunk. Also neither of the seats were bolted down, and one seat was replaced with a universal model that you’d find discontinued in a 2006 Summit Racing catalog.

The shifter—a knurled stainless steel knob with a beautifully sculpted manual gate—was missing the gate and the shifter welded to the lower rod because it broke during filming. They hadn’t bothered to weld it straight, so it had a bit of a gangster lean, along with looking like the base of it had some contagious polyps. However I’d be OK with all of it, the carbon monoxide inhalation, the roll cage, the janky shifter, if it wasn’t for the insane starting procedure.

I’m not sure if you’re aware, but Lamborghinis aren’t usually subject to the rigors of driving on an action movie set in freezing conditions for weeks on end, so invariably some strange things will break. One of those things was the key, and it broke inside the ignition cylinder, making it impossible to turn the car on, or off. It was stuck in the “accessory” position and could be switched to “on,” but the internal tumbler wasn’t able to turn to actually start the engine. Obviously a car dead in the water was losing money for the production crew, so what they did was quite ingenious—they used the car’s stock battery kill switch in the engine bay as a permanent “off” switch, and they ran a wire from the positive end of the battery to the starter solenoid, with a switch in the middle that looked identical to a doorbell. It’s basically hotwired with a switch to keep from burning out the starter.

The starting procedure of the car was:

I’m not a man who values status or requires the finest things in life, but to see a jerry-rigged setup like this on a car that was the equivalent of $500,000 in today’s money struck me as disturbing.

The saving grace was that the rigging worked and the car technically ran and drove, which is what sellers on Facebook Marketplace will tell you matters most. My roadie buddy and I carefully lined the car up with the trailer, lifted the Murcielago’s nose up with its front lift feature, and drove it onto the Here Comes Tavarish Express. It was an inch-perfect execution deserving of praise. Well, until we took a step back and realized that the entire thing was FUBAR from the beginning.

I hope you’ll excuse me for being geeky and technical, but let’s talk a little bit about towing. In order to tow a car, you’ll need a few things other than a trailer. You will need the truck to be able to tow the trailer and not overload the drivetrain, brakes, or frame. You’ll also need the correct weight distribution on the trailer. I had the first, but the second was nowhere to be seen. The problem was that the tongue weight—the weight on the ball and hitch of the trailer—was much too low, meaning that the trailer itself was leaning backwards, as I’m guessing this trailer probably wasn’t meant for mid-engined, heavy Italian supercars. Had we used this trailer, the second we reached highway speeds on a turn would have lifted the rear wheels of the truck and created a pendulum effect on the trailer, meaning certain death for us, but worse than that, my car would have been damaged. Also, loading the car in backwards wouldn’t have been an option because the rear wheels were much too wide and I didn’t want to risk cutting more “slightly structural” structure out of it.

So I did what everyone does in situations where they’re stuck: I threw money at the problem. Money I didn’t have. I talked to the shop owner and it just so happened that he just got a trailer for one of the race cars he acquired for a film. It was aluminum and barebones, but it had a tire rack, it was wide enough and low enough, and it had an open front so we could place the Lamborghini anywhere we wanted, including backwards.

For this privilege, I paid another $2000, which could have gone to paying my mortgage, but let’s be honest, project Lambos are a little more important than paying the bank back. We then got the car unloaded from the customized YouTube trailer and we put it on the newly acquired Trailer Superleggera. It was quite uneventful. The car strapped down easily, the tongue weight was perfect, and it even had a small box in the front where snakes could live and scare the hell out of me whenever I opened it.

The old trailer, which I’d had for a grand total of three days, complete with a new paint job and about $1000 worth of new tires, was left in the production company parking lot, right next to other famous movie cars. My hope was that it would make its way into the next Fast and Furious franchise movie, although I’m not holding my breath.

After that ordeal was over, we began the long trek back to central Florida, where things made sense and diesel was less than $4.75 a gallon. I began pondering how to approach this project and what challenges lay ahead of me. It’s not common that I get a car that isn’t just rare in model, but has such unique provenance and history.

I decided that instead of this being a project where I make the car in my own image and chase the YouTube trends of tire smoke and loud noises, I would restore this car, as haggard as it was, to the look it had in the movie, except without all the caveats that a car made only for film would have. It would be a weekend warrior, a canyon carver, a road trip car, a cars-and-coffee show stopper, and hell, maybe even a daily driver.

And the reason is simple: in the week that I drove the last 2500 miles home, every single fuel stop, food run, and hotel arrival was an event. Delighted locals came out, took pictures, asked about the car, and chatted me up about their own projects. They didn’t care that there was diesel soot on it or that I taped every loose panel with blue painter’s tape. Many people didn’t even know what car it was, they just knew it was interesting, unique, and beautiful, and wanted to know more about the intriguing car that was on the back of a filthy white Ford dually with Florida plates.

This project wouldn’t be about me, but it would be about showing the millions of people who have already seen the car on screen what it’s really like to take apart a car that only millionaires could buy, and getting your hands dirty to fix issues you didn’t know you were capable of fixing. It would be about sharing the very real costs that a project like this can take on a person who doesn’t have a family with two commas in their bank account. It would be a dream realized in a very literal sense, and although the journey may be a lengthy and expensive one, I hope you’ll join me for the ride. 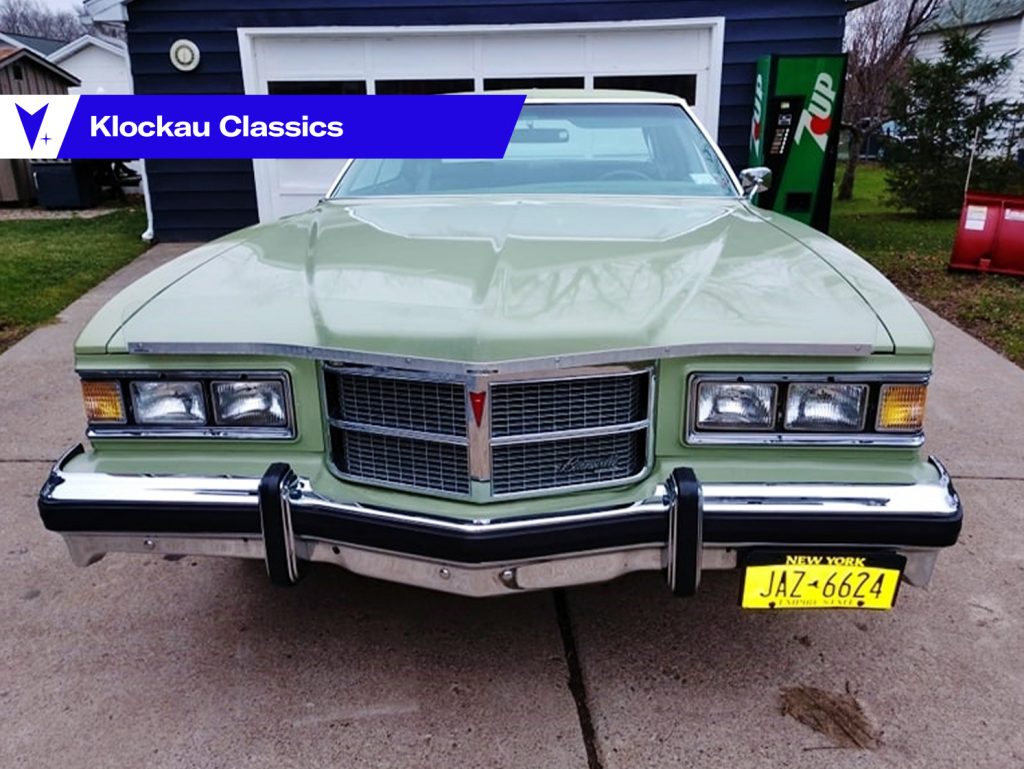