Smithology: Then you do it in sandals

The last time I saw Rick Mears, he was wearing sandals. This is interesting mostly because he was also standing in the pits at Indianapolis next to a running Indy car. If there is one place that America’s grand old temple of speed does not want bare toes, it is the hot pits, especially when a snarling, carbon-fiber open-wheeler is about to rip off into a 200-mph lap.

Unless, of course, you are Rick.

In September of 1984, in the prime of a sparkling career known for an almost supernatural lack of mistakes, a 32-year-old Mears put his March 84C in the fence at an oval in Canada. He told reporters that the crash broke every bone in his right foot and most of the bones in his left, but eight months and four operations later, he was back at it, back in Indianapolis, testing for the 500. Walking was painful, he said, but he couldn’t stay away. He said the same thing years later, after notching his third of four Indy 500 wins but also another crash, another hospital, another broken left foot.

I saw him at Indy in 2015. Retired from driving, he was working for Roger Penske as a coach and spotter. I stood next to the wall, watched a Dallara light its rear tires inches from his feet. Then I asked a photographer friend some silly question about track rules.

“First of all,” I was told, “when you’re Rick Ravon Mears, Rick the Rocket, one of the coolest cats alive, you get to do a lot of things. But second, when an Indy legend has used his legs as crush space and normal shoes hurt like hell, the Speedway makes exceptions.”

I am not Rick Mears. I am a club racer, a professional tester of automobiles, a person who occasionally finds grins on public pavement. I have little in common with the man besides a fondness both for dark sunglasses and for that feeling you get when a car is up on the tire and howling.

Except: My feet are broken.

Broken is perhaps misleading. The X-ray says the bones are healed now, but doctors say walking will for the rest of my life occasionally be a shoe full of knives. Blame personal error. Several years ago, I was racing an old BMW at the Circuit of the Americas, in Texas, when the gearbox went phooey. Lacking deep talent with a dismantled Getrag, I stood by that night as friends cracked open the transmission to fix it. Then I got bored and used a few paddock traffic cones to build a small slalom in an empty corner of the parking lot.

You see where this is going.

Like a lot of race teams, our outfit had a golf cart. Someone—ahem!—had disabled both the cart’s torque limiter and its speed limiter, for giggles. Around midnight, gearbox still in pieces, I may have used my feet as outriggers, keeping the cart on two wheels in a sort of free-form, full-body cackle.

A doctor told me this choice was stupid. Mistakes were made. Tendons in my feet were stretched. (Also true: It was fun. What did Edith Piaf sing? No regrets.)

Tendons aren’t like bubble gum; a stretch is a one-time thing. The pain lingered, but never loudly. Then, last fall, while filming at Lime Rock, I tripped on a few stairs. A metatarsal in my right foot went ping! and cleaved in two. Moments later, the big toe joined in, tearing a shred of cartilage from a place where cartilage normally lives and depositing it somewhere awful else. All that damage formed a gang and went to town. Months of repair later, I can walk and drive again, albeit not as I did. Muscle resolution and fidelity hang on a dice roll. Glassy downshifts under hard braking currently require either no concentration, the old standard, or all the brain I’ve got. Daily pain is the only variable.

How confidence can sine-wave. I was never Mears in a race car, but I was alright. I now drive worse than I ever have, an obviously blunt instrument. I was 39 years old on those stairs. I have now seen one more birthday.

You’re still young, people say. Not too damaged just yet. (By “people,” he means his editor, a man approaching his fiftieth birthday and the recipient of fourteen titanium screws across the extremities to address multiple broken legs, arms, and hips, plus one pelvis crack and a shattered right foot. —Ed.)

To which I answer: Cool. I feel young.

Wouldn’t it be nice if those three words were the whole story?

Back to Rick. I interviewed him once, at Indy. He wore sunglasses and a hat against the steamy Midwestern sun. Being a stoic professional, I did not fanboy into telling the man that he seemed a chill nonpareil, this unflappable, white-haired cross between a sober gunfight Lebowski and a philosophy professor with a thing for Cosworths. I wanted to buy him all the drinks.

“You just get back in the car,” he said. “You try not to look at it differently—maybe there’s a little apprehension that first time, but basically? You just keep going.”

That makes sense, I heard myself say, as a voice in my head quietly noted that it somehow also did not.

The mind of the athlete is never not fascinating. A while back, I had a chance to work with Ross Bentley, the world-class driving coach and Speed Secrets author. Bentley has long studied the soft science of sports—how the brain can traffic-control a body through age and stress, through comebacks and the inevitable fallings-apart. He came back himself, once—in 1993, a cracked fuel regulator set his Indy car on fire, leaving him with first- and second-degree methanol burns on his face, neck, and hands.

I called Ross last week. My feet are not tragedy, I said. If a journalist never again drives smoothly at the limit, nobody cries. But how do pros stick the landing, that mental and physical reassembly, with real stakes? When you’re trying to rebuild a livelihood or a life?

The line crackled silently for a moment. “It’s a decision,” he offered. “You have to make the choice. The voice that says you can’t do it—do you want to listen to that, or … not?”

“Of course. But which comes first—belief that you can do something, or the ability to do it? Will exercising for two months change your belief system? Yes. Because you can tell yourself you’re also doing the physical work. Our brains are amazing. Neuroplasticity, how people can be reprogrammed after an injury or stroke, it’s remarkable.”

I leaned into honesty.

“The thing with my feet seems so petty. I feel silly for being so frustrated by it.”

“Part of it is, don’t make it easy on yourself. You almost have to go, No, I have to make this work. Visualize it, practice it, work at it. That decision is no small thing, and maintaining it is a conscious effort. The cool thing is, that process, it’s a tool you can use so many places in the rest of your life.”

I hung up thinking about change. How we root so many of our actions in fear of loss, which is silly, because we lose something every day, on some level, whether we acknowledge it or not.

One of the unspoken truths of our little corner of society is that cars take as much as they give. From a young age, you simply rely on your body to drive the car, work on the car, race the car, whatever. Then, one day, the equation shifts. The machine doesn’t stop asking, but the amount you can give starts dropping by degree, and nobody cares but you. Maybe it means you can’t reach over the fender of your ’57 Chevy without a disc in your back turning to fire. For some people, past a certain age, simply rolling a creeper under a car can be so painful, an oil change is like climbing Everest.

What a privately ghoulish parade, bodily decay. At the ripe old age of 20, I probably wouldn’t have hurt my feet; the bits inside would have simply rebounded, more elastic. At 30, I’d already be feeling better about it. At 40, it takes a shocking amount of effort and time to regain status quo, and that’s assuming the hardware will even let you.

The Sunday-morning takeaway, naturally, is to simply do as much as you can while you have the chance. I find the subtext happier: What’s the point of the human experience, all this breathing and medicine, if not yelling into the abyss? Isn’t the best salute to a lost anything the mere act of carrying on, continuing to plug away against impossible odds?

Encouraging stuff, so long as you don’t think about it too much.

I leave tomorrow for my first club race in almost a year and a half. That same BMW from Texas, and my first time back on the horse since my feet went down. A psychologist would probably label all this rumination inevitable, the death throes of that dream everyone has as a kid, where you quietly believe yourself immune to wearing out and thus the only true immortal in the history of time. Before you get older and realize you’re just another happy schmuck aging into dirt.

Not that you can’t dwell on the process. People do in a thousand ways, but only one choice really makes sense: You tie your shoes and walk out the door every morning, even as the process fights back, because you’re vertical and breathing. The nature of the deal means that you don’t get to name the variables or pick the dates. You simply wake up each day and do it. Because you can. Because you get to do it.

Unless, of course, you are Rick.

Then you do it in sandals. 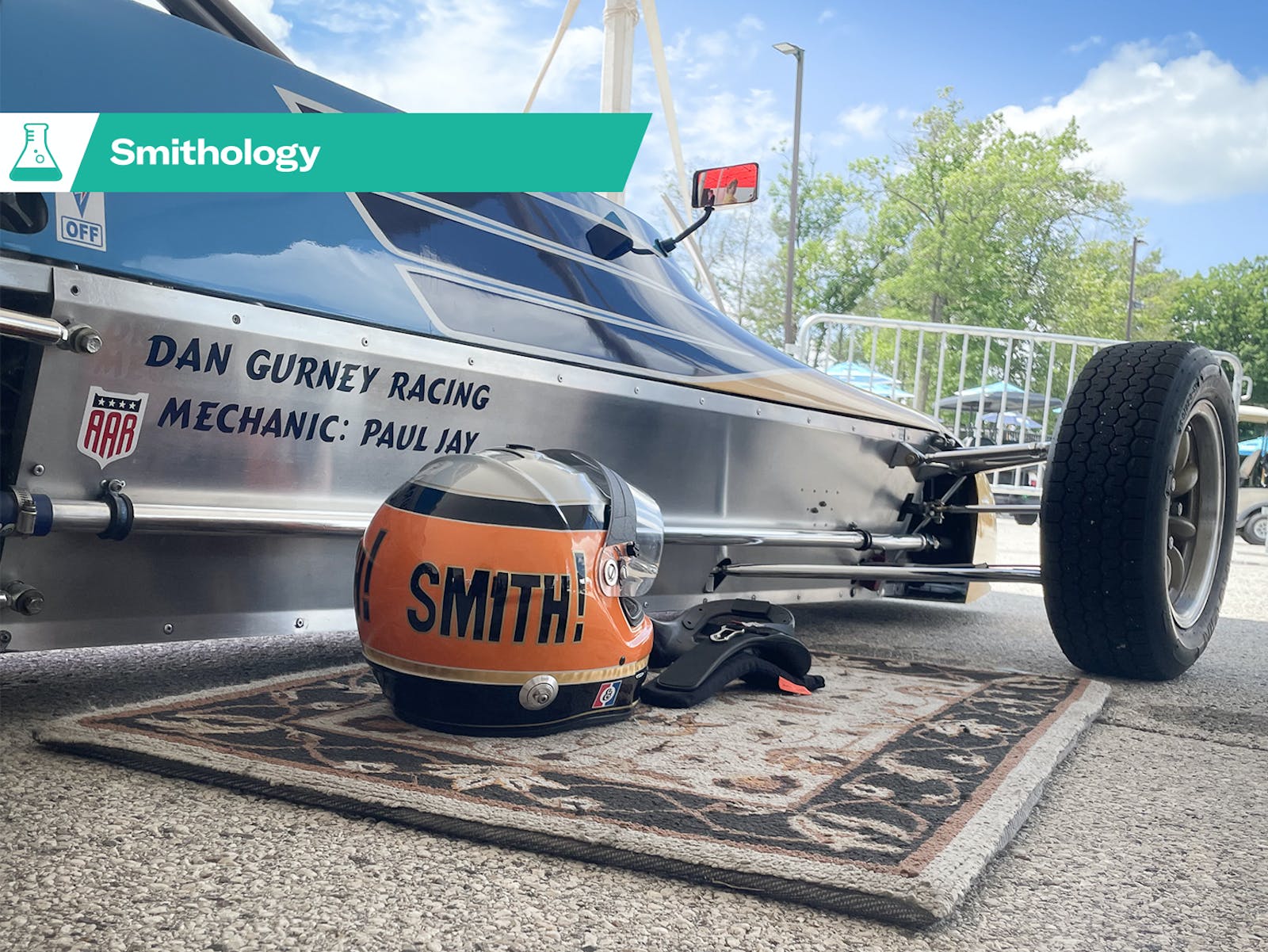