Smithology: Certain components had the air of a gnawing-on by wolves

Today, gathered friends, we shall discuss the eternal light and shade of the no-good, terrible, awful, only lightly bad day.

Fair warning: We shall also touch upon the joys and pains of lacquer, the clumsiness of my father, my own inheritance thereof, an exquisitely loud and extremely cheap Italian motorcycle, and, tangentially, a Fender Stratocaster.

But first, my bungling.

I make mistakes. Not every day, but they happen. Trust nobody who can’t say the same. There is a place in hell for people who have never failed, and that place is almost certainly dull as roped soap, because people who have not screwed up are not very interesting, and, more to the point, they are mostly no fun. Along similar lines, each of us is gifted natural strengths. These strengths are also curses, in a sense, as they nudge us toward easy answers.

Like water, people tend to follow the path of least resistance. Do the same thing in the same way long enough, you dig yourself a rut.

As a form of quiet pushback there, I paint. Not with brushes. Often car parts. Occasionally model kits. Once, a guitar. I do this mostly because I’m bad at it. This week, I painted one particular motorcycle part several times, painstakingly wet-sanding to primer over the kitchen sink every time I screwed up.

This motorcycle arrived in my life in the same way that nice things don’t—i.e., a friend called and insisted I take it.

But no, I said! I have no money for extravagant purchases, however cheap! The kids need dental work! The pantry needs Cheez-Its! And so on, adult noises, yes!

But no, the person on the phone insisted! You are a person who rides and fixes motorcycles! (I am.) Don’t you love this exact model? (I did.) Don’t you enjoy projects? (I do.) Wouldn’t you pay the incredible price I am offering, not much more than a sack of cheeseburgers, if the funds were to magically appear in your account? (I would have, actually.)

You don’t have to pay me for years, he said. Just get it out of my house.

Not being totally stupid except when presented with fast-food menus and the occasional Tuesday, I did.

Old Ducatis are like old Ferraris: all grappa-grope and drama, but buy-in is rarely tied to long-term spend. Also, nobody wants the scruffy ones. When it showed up, the bike was rattle-can black. It was originally red, of course, because all Ducatis are red, or at least, the Ducatis everyone remembers are red, in the way that every day in Paris is beautiful and Philly cheesesteaks never give anyone the industrial toots. An idea doesn’t have to mirror reality to reflect why we show up.

The bike, a ’96 900 SS, was straight and mechanically healthy but an obvious crash victim. Certain components had the air of a gnawing-on by wolves. That black paint held more sags and orange peel than Florida. Bug fossils elbowed for space with sanding marks and dry spots. The right-hand fairing in particular looked to have played tonsil hockey with a belt sander. Grime was ever-present. I tested the paint with a rag and lacquer thinner; the rag came away black.

This deal, as it were, went down in early November. When the bike came home, weeks later, it met the ancient list of sacred rituals: the Ceremonial Crevice Scrubbing, Ye Olde and Thorough Leak Inspection, Professor Smith’s Medicinal Letting of Humours and Fluids. Evenings were lost to readings of history and factory service procedures. A to-do list was assembled and parts were ordered. Finally, caught up in the bliss of a spare Sunday afternoon, I took a flyer on wet-sanding that trashface paint.

The tank was first. Did it come up? It came up. There was enough depth that the bugs and garbage rolled out easy, and buffing produced a solid, level gloss. Embiggened, I got carried away and wet-sanded everything else, hours on end. Imagine a man attempting to polish dirt, only the whole process actually goes quite well, and then, magically, the dirt is a Renoir. Or maybe just a Velvet Elvis. Which is much like dirt but also a hunk of love.

Painting the belt-sanded fairing seemed sensible. (Reality: Not a belt sander. Probably a piece of asphalt, grinding grinding grinding, as some excitable Ducati Boi slid along behind, yelling four-letter words into a helmet.) There was a gluing and filling, then a scuffing and leveling, a blowing-on of primer. Followed by a filling, more sanding, something like a guide coat, fill again, wait, poke at a bit, one last coat of primer, then color, then clear. Many evenings after work, over that kitchen sink.

With paint, the more you spray, the better you get. I don’t paint near enough. This whole process took more time than I would like to admit. Finally, et voila, the work was nearly done.

Which is when I porked it.

Later, after a patient and calm repair of the problem, I porked it again. Same piece, different issue. The details of either screwup are irrelevant; suffice it to say that there was each time a sanding, and a return to primer, and a string of four-letter words.

As paint goes, lacquer is particularly forgiving. Problems in a finished work are often easily repaired and blended without starting over, and most flaws can be traced to errors in technique or prep. Spray often, the process and care become second nature. Do it as a hobby, maybe once a year at most, that nature never locks in.

In the beginning, it’s just color and work. Then the errors stack into mental noise, one atop another. The din prompts hurry, which prompts mistakes. Sometimes, the simple act of fighting the urge to be impatient… makes you impatient.

That fairing is now hung in my office, repaired again and curing. Because I am not always the brightest of bulbs, I did not immediately consider the proximity to an old and finished project, a guitar I resprayed in 2018. That instrument was once black polyurethane and is now Sonic Blue nitro lacquer, a Fifties GM color used by Ike Turner and George Harrison. More of the old story: countless nights after work sanding to bare wood, then filling and priming interspersed with more sanding, then repeatedly attempting to spray, outdoors and under cover, a bit of dead tree I had unjustly come to see as fickle. 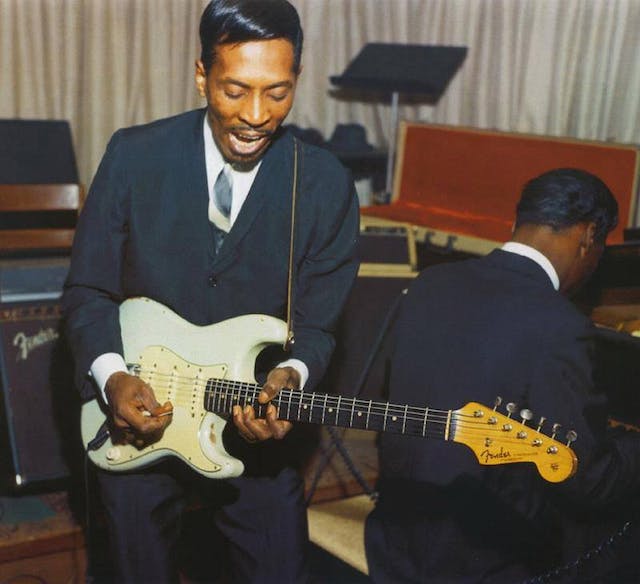 This project took place in Seattle, at my parents’ place, a mile from my driveway. Seattle sees a lot of rain, and my house had no place to spray outdoors; Mom and Dad had a near-empty covered garage. More to the point, it was reason to be around my mother. She had just been diagnosed with the aggressive brain tumor that would eventually kill her, but at that point, she was just Mom, Alice, funny and full of life, not wanting to make a deal of the obvious future.

Rain brings humidity. Lacquer turns air moisture into clouded finish, called a blush. There exists in my head a record of just how many days and hours this process took—to say nothing of cans of color and clear coat—but it’s far more satisfying to pretend I don’t remember.

Lacquers cure through time and evaporation. Volatile organics creep from wet liquid to atmosphere, leaving pigment behind. Lacquer won’t accept a final sand or buff until it cures to a certain hardness, and that process can take weeks, tied to weather and composition. When the Strat was finally sprayed half-decent, I hung it in a quiet corner of the garage and left it to breathe. Some time after, Dad was rearranging a few things in there and managed to accidentally knock the head off a ceiling sprinkler. In the ensuing indoor deluge and melee, the Strat fell to the concrete floor. (This is my father in a nutshell: a lifelong woodworker and skilled craftsman, but also occasionally a pair of shoelaces tied together.)

The impact produced a few long cracks in the paint, plus two sizable gouges on the guitar’s flank. Picture what a toddler could do with a chisel. Years later, those marks are still there. I haven’t fixed them and probably won’t, but that doesn’t mean I don’t think about it. In the way that losing a parent and paint fumes can bring to mind a lot of things.

Totems are funny like that. That whole period in my life was me learning to deal with a stream of unpredictable events I wanted to wish from existence, and now, well, those events mean something else.

Twenty-five years ago, I was 15, holding some birthday cash and money saved from odd jobs. Mom drove me to the local music shop, where we bought a mass-produced piece of wood covered in poly. Now that slab sits in my office, blue like an old Cadillac, a few feet from my desk. That Ducati will go back together and get ridden. The paint will be done, one way or another, like the tired forks and leaky carbs. In the meantime, that black fairing hangs on a wall, quietly curing. Maybe the last step, though who can say for sure?