The following owner’s-manual text was uncovered in a barn in Europe in the year 2000, next to the ruins of the only surviving French Helicron automobile.

That text has been translated and excerpted below from the original French. We present it here with thanks to the Helicron’s owner, Nashville’s Lane Motor Museum, and to commemorate Smith’s recent test drive of this remarkable vehicle.

Hello, and welcome to your brand-new 1932 model HELICRON propeller automobile! The finest of safe aeromotive land traversement awaits you over the safe years and miles to come!

Your 1932 HELICRON propeller car is a miracle of modern engineering with an engine too powerful for its own good! Propeller travel is the next great step in human evolution! In the coming years, expect to encounter such mechanical marvels as the propeller-driven city bus, the propeller-driven dish-washing machine, even propeller-operated trousers!

In the meantime, congratulations on your wise choice to join the growing dozens of propeller-automobilists around the globe!

Is this a safe and perfectly ordinary automobile? Why, of course it is!

Fact the First: Your new vehicle is driven forward, with alarming accelerative thrust, by a 48-inch, climb-profile propeller of the finest natural hardwood! This propeller faces forward into all traffic, wildlife, pedestrians, and other obstacles! Does it really? Yes!

Please note that this machine-ship features the patented HELICRON Protective Wooden Hoop around its specially developed twin-blade drive device! Blades which, despite appearances, are not designed explicitly to mutilate the walking pedestrian and-or chop your hands off!

Please do not fear that your fine new aeromotive conveyance will, in fact, chop your hands off! In the entire monthslong history of the HELICRON manufacturing concern, this has never happened except only once, and only then to Mrs. Eugenia P. O’Halloran of Keokuk, Iowa, 78 years of only lightly feebleminded age if she was a day, and law professionals retained by HELICRON AUTOMOBILES AND AMALGAMATED TUBEMEAT CORP. have determined that she was, in fact, asking for it! No one liked her homemade pies anyway! Propeller-aeromotor without fear, kind citizen!

Please note that the phrase “propeller-aeromotor without fear” serves as neither guarantee nor promise of the lack of inhuman bloodthirst that several noted East Coast clairvoyants and licensed doctors of bodily humours have alleged lives and breathes for all eternity in the drive blades of the patented 1932 HELICRON model! HELICRON AUTOMOBILES/A.T.C. does not in any way believe its engineering to be the work of any demon or spirit currently known! On this we will swear of it!

Fact the Second: A safe and fully limbed individual should know and cogitate well on the HELICRON starting procedure! The vehicle’s lacquered wooden body and stout, ladder-steel H-frame may cause it to appear as friendly as a small woodland creature!  Perhaps it appears as a toy one would offer to a simple child! We assure you, it is not!

In order to start engine and prepare for a spirited journey on the cusp of man’s ever-multiplying innovation, one must follow only a few simple steps!

3. Before embarkation, obtain and log local meteorological data, including such easily parsed basic variables as ambient temperature, ground-level humidity, local atmospheres of pressure, aneroid barometer variance, statistical anemometer deviation, local time of astronomical twilight, precipitation on hills or inclines along any planned routes, and the quantity of anvil-shaped cumulonimbus cloud formations in the near and greater region!

Fear not, should this sound complex! A child of five could do it!

4. Inspect the propeller blades for leading-edge damage! The HELICRON patented drive aerofoil is a strong and well-considered device, recently certified by the Fédération Aéronautique Internationale! And yet, like any creation of mortal man, it can suffer terminal damage in regular use!

5. Cycle the ignition switch, engage the starting device, and witness the propeller turn slightly! Marvel as engine’s cylinder firing commences! As have dashing sky captains for years, from the Nieuports of the Great War to the hangart professeurs of your local aerodrome!

6. Push forward upon the hand throttle mounted outside and to the left of cockpit! Trust your own personal and divine right of eyesight through the cycling path of the immensely powerful HELICRON propeller! Then drive away! No shifting, no clashing of gears, simple as that! A child could do it! 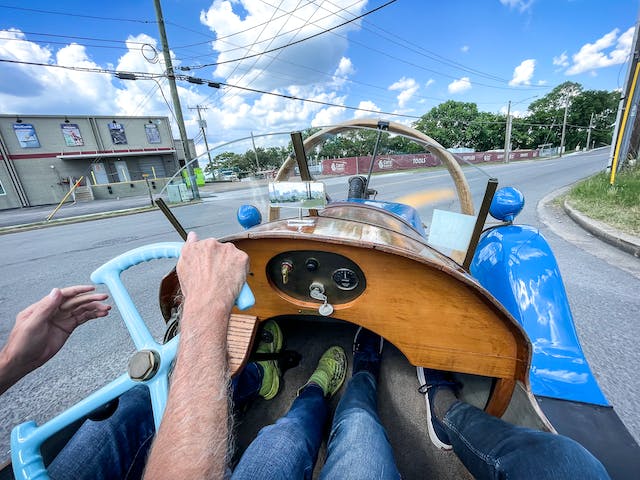 A WORD ON STEERING AT HIGH SPEED:

The patented HELICRON frame was developed in concert with the French-built and Rosengard-licensed iteration of the British Austin Seven economy car. Its frame is thus a Seven frame reengineered and reversed, with the front axle serving as rear wheels.

In this way, the HELICRON can turn safely in diminutive radius, while also offering excellent—and safe!—maneuverability.

Rear-wheel steering requires caution. Please do not turn so quickly that the car lifts a front wheel, topples onto its side, or drifts the propelling blades into the path of oncoming vehicular traffic.

This behavior is entirely normal and in many counties legislated as ordinary and no one should be alarmed at all.

A WORD ON RELIABILITY:

The HELICRON is a paragon of simplicity! Its unique and safe propeller drive means no clutch, differential, or transmission—the HELICRON is cheaper, lighter, and simpler than the average car! Nor is it stopped by poor traction! Snow, rain, wind—the HELICRON will safely carry you to safety across the roads of this great and dangerous world without cause for worry on your safety and especially not for loss of precious bodily fluids!

On an unrelated note, please consider the presence of the powerful HELICRON drum brakes: Although these foot-operated, pedal-driven items are at the forefront of modern braking know-how, they cannot overcome the formidable power of the HELICRON engine and propeller, especially at full throttle!

In case of emergency stoppage—perhaps to avoid imminent collision with a public sidewalk or living individual—it is imperative that the hand throttle to be immediately closed! Failure to do so can lead to

(The rest of that sentence was missing from our owner’s manual as recovered, the page long ago torn away. The margin carried a note, however, hand-written in flowing French cursive: the following three words, faded but legible. —Ed.)

A WORD ON THE TRAVERSING OF INCLINES:

In rare circumstance, the HELICRON’s efficient thrust and staggering abundance of horse-vapeur can meet its match in the power and gravity of an almighty God. Short rises in pavement, inclines of greater than one percent, elevated parking areas with angled ramps, and/or speed tables of more than two inches’ height can conspire to outmatch the HELICRON’s immensely powerful propeller!

As the HELICRON’s immensely powerful propeller is limited by the physics of the vapours of the very gas we breathe, this effect may be exacerbated—though never insurmountable!—on days of extreme humidity and air density! Thrust may be reduced despite maximum revolutions, and the vehicle may halt, unable to proceed!

The greatest of modern aeronauts have assured the engineers at HELICRON AUTOMOBILES/A.T.C. that no ship of the skies would fare any less!

In such cases it can be necessary to exit the vehicle and provide a modicum of bodily assistance! To wit, please carefully observe the following steps:

1. Exit the vehicle with alacrity, taking care to avoid the all-powerful but kind and benevolent thrust blades at the front of the vehicle!

2. Have any passengers exit the vehicle with alacrity, also avoiding the all-powerful but kind and benevolent thrust blades at the front of the vehicle!

3. Stand to the left of the steering wheel! Carefully offer up a hand to the throttle lever. If that hand is willing, increase throttle to full!

4. Pause to secure from propeller blast any errant or unfastened headwear or petticoats!

5. Commence to pushing the mighty HELICRON up the hill! The propeller, she is a strength, but she occasionally welcomes your help! The HELICRON’s 1000-pound mass is but a trifle for those stout of mind and body!

If gravity at the top of the incline causes the car’s velocity to exceed your walking pace, and the HELICRON commences down the hill unattended, fear not! Simply run after the vehicle!

A WORD TO THE ESTEEMED HEIRS OF MRS. EUGENIA P. O’HALLORAN OF KEOKUK, IOWA

While we welcome any and all enthusiasm for the majestic HELICRON automobile and embrace opportunities to discuss its foolproof design, we regret to inform that your repeat inquiries have caused our manufacturing office to cease reception of all inbound telegrams and visitors. Please stop calling.

POSTSCRIPT: Yes, the Helicron actually exists. There is, however, no owner’s manual. Smith wrote this entire post after a short drive in the car with Hagerty friend Jeff Lane, likely while hallucinating from too much Nashville hot chicken.

The Helicron is a relic from a time when aviation dominated public fancy—for a short while, we slapped propellers on everything. Even if the idea was clearly … less than good.

The Lane’s Helicron was found in a barn 20 years ago. It has since been restored and now lives in the museum’s main Nashville facility, where it is regularly “flown” and demonstrated for visitors. The original engine—manufacturer unknown—is long gone. A 40-hp Citroën GS four-cylinder of 1980s vintage now lives in the car’s nose, directly coupled to a custom wooden propeller. The sum is a ridiculous joy to drive but also one of the least practical automobiles ever built. We encourage you to visit it, to say nothing of the rest of the Lane museum itself. Both are marvels.

“People ask what the prop throws [into the cockpit]. It’s not that bad. You go over road gravel, it doesn’t tend to pick that up. I had a pine cone come through one time, go by my head, though.

“It’s 40 horse, right? If it were 400, that’d be a different deal. Definitely a helmet.” —Jeff Lane, founder, Lane Motor Museum

Opinion Carini: The best car people are in it for fun, not money
Wayne Carini

Get an insurance quote
A Story About
Leave comment
Read next Up next: 4 high-dollar rides in Top Gun: Maverick that don’t make financial sense