A Triumph(ant) passing of the torch

It’s said that the best days of boat ownership are the day you buy the boat and the day you sell it. That has not been my experience buying and selling motorcycles. Watching one of your bikes ride off in someone else’s truck is hard. It’s especially difficult when the buyer is the type of person my experience suggests would be served better by a different machine.

Two weeks ago, I sold my 1973 Triumph TR5T. As the gray pickup drove away, a war waged in my head. What is the proper emotion when something you care about heads to a new home? Especially when you know that home has different views on appropriate treatment for a vintage object with delicate patina?

Let’s start at the start. A while back, Editor-at-Large Sam Smith bought this wicked-cool Triumph. Just seeing photos on the internet made me utter those dangerous words: “When you are ready to sell that,” I told him, “let me know.”

Months later, my phone rang. The Triumph was a former AHRMA racer, mostly sorted but in need of a few things. Sam got swept up in other projects and needed to move on. On my end, money and projects were shuffled about in order to justify the spend. Before long, the Triumph rolled out of Sam’s Tennessee shop and into a trailer. I drove north, home to Michigan, intoxicated with potential.

This bike attracted me for one simple reason—it looks bad-ass. The TR5T came to my garage in October of 2021, a back-burner winter project. After I set up the Amal carb and hacked together an exhaust, that 500-cc parallel twin roared to life. It then proceeded to annoy my neighbors on a weekly basis, as I used the beast to tow my trash and recycling cans out to the street each Wednesday night. A few members of my small neighborhood probably wish I had left the bike out with the trash.

As fun as that was, it was hardly proper use for something so cool. Guilt stacked up. I began to question if the space and funds tied up by the Triumph weren’t better used for other experiences. Around that time, another friend offered a screaming deal on another bike that I’ve long wanted, one a lot more practical.

A for-sale listing formed. A single Instagram post brought a few replies asking for details, but only one seriously interested party. And that potential buyer brought what felt, at the time, like a serious moral dilemma: Does my responsibility for an object I love extend to finding what I believe is the perfect buyer? Or does it just mean finding someone who can pay my asking price?

To be clear, that’s part of why Sam sold the bike to me. He knew I would spend the time to do the research and make it run right. The Triumph lived full-time in my garage, it was fed only non-ethanol fuel, and it was doted over whenever it so much as hiccupped. I strived to be the perfect caretaker, treating a 50-year-old bike as if it were only two years old.

The Instagram messages from that potential buyer painted a picture. “Just how bad are the brakes?” he said. “I’ve never ridden a motorcycle with a drum front brake.” Then came, “When you say it has a tickler, what does that mean?” My favorite was, “Have you had any trouble with the electronics?”

It’s a Triumph with Lucas ignition parts. Jokes come with the territory.

Still, I supplied honest answers to every question. The window shopper became a buyer, and he sent me a deposit. When we met this fall, at the Barber Vintage Festival, to hand over the bike and its trove of spare parts, I couldn’t help but notice that the new owner was maybe a little green in mechanical experience. When he mentioned plans to park this wonderfully preserved, patina-rich Triumph in the open parking lot in front of his dorm room, it felt like a dagger to my heart. I pictured the bike degrading rapidly.

Around that time, a thought crossed my mind: hand back the cashiers check, then gently suggest that this young man hit Barber’s swap meet and find a little Honda enduro. That would be a better fit for his needs and plans, I thought. He would likely have a great experience, and the bike wouldn’t be as needy or delicate as the Triumph.

Only . . . I couldn’t bring myself to do that. Because if someone would have done that to me, I wouldn’t be who I am.

See, at 16 years old, I bought a Chevrolet Corvair from a scrap yard. It was more iron oxide than car. The owner of that yard probably felt that not selling me the Corvair would have been doing me a favor. After breaking apart the locked-up engine with a scrap two-by-four and a three-pound sledge, I realized the Chevy was never going to drive again. A few smart friends recommended buying a running Corvair to stay motivated. I could enjoy driving, they said, rather than spiraling into the frustration of a never-ending project.

It took an entire summer of bagging groceries to stack up the 22 hundred-dollar bills that ended up being traded for my 1964 Corvair Monza coupe. Without a doubt, the owner was not excited to sell me that car. He knew I planned to daily drive it and park it at my high school. He knew I barely owned a complete set of hand tools.

At that point, most people would have said I had no business owning a car nearly triple my age. That man knew the potential he had to keep that Corvair in great shape and preserved for the future. He also knew that the most powerful thing he could do was let me use that Monza to create unforgettable memories and learn.

That Corvair, along with the hours spent learning to keep it on the road, is what created the oil-soaked, mechanically obsessed Kyle Smith you find here.

I literally would not be where I am, wouldn’t be at this job and writing these words, if it wasn’t for that gentleman in Lawrence, Kansas back in 2007. Who am I to gate-keep another budding enthusiast from diving right in? Sam’s old Triumph, my old Triumph, is a nice, complete bike that came with a lot of spare parts and pieces, but it’s not some rare treasure that belongs in a museum. Like that Monza, it’s an old vehicle first and a collectible second. These machines weren’t particularly special when they were new, and while we do have a duty to be caretakers for the next generation, at some point, we have to let the next generation actually join us, whether it feels right or not.

The service manuals were the last thing I handed Ben before shaking his hand and sending him off on his new adventure. On my 14-hour drive home from Barber, the idea that the Triumph “deserves better” disappeared. It was replaced by the feeling that the new owner was perfect: a young person, excited to learn, who very much wanted to be part of vintage motorcycle culture.

In the end, it did go to an owner like me. Just on a time delay. We all started somewhere in our journey with old cars, and that journey often involves jumping straight into the deep end and learning to swim.

Who am I to withhold selling a motorcycle because I don’t think someone else is ready? That choice isn’t mine to make. But I will say one thing: Ben, if you’re reading this and you end up in over your head, you know where I live. Call any time. 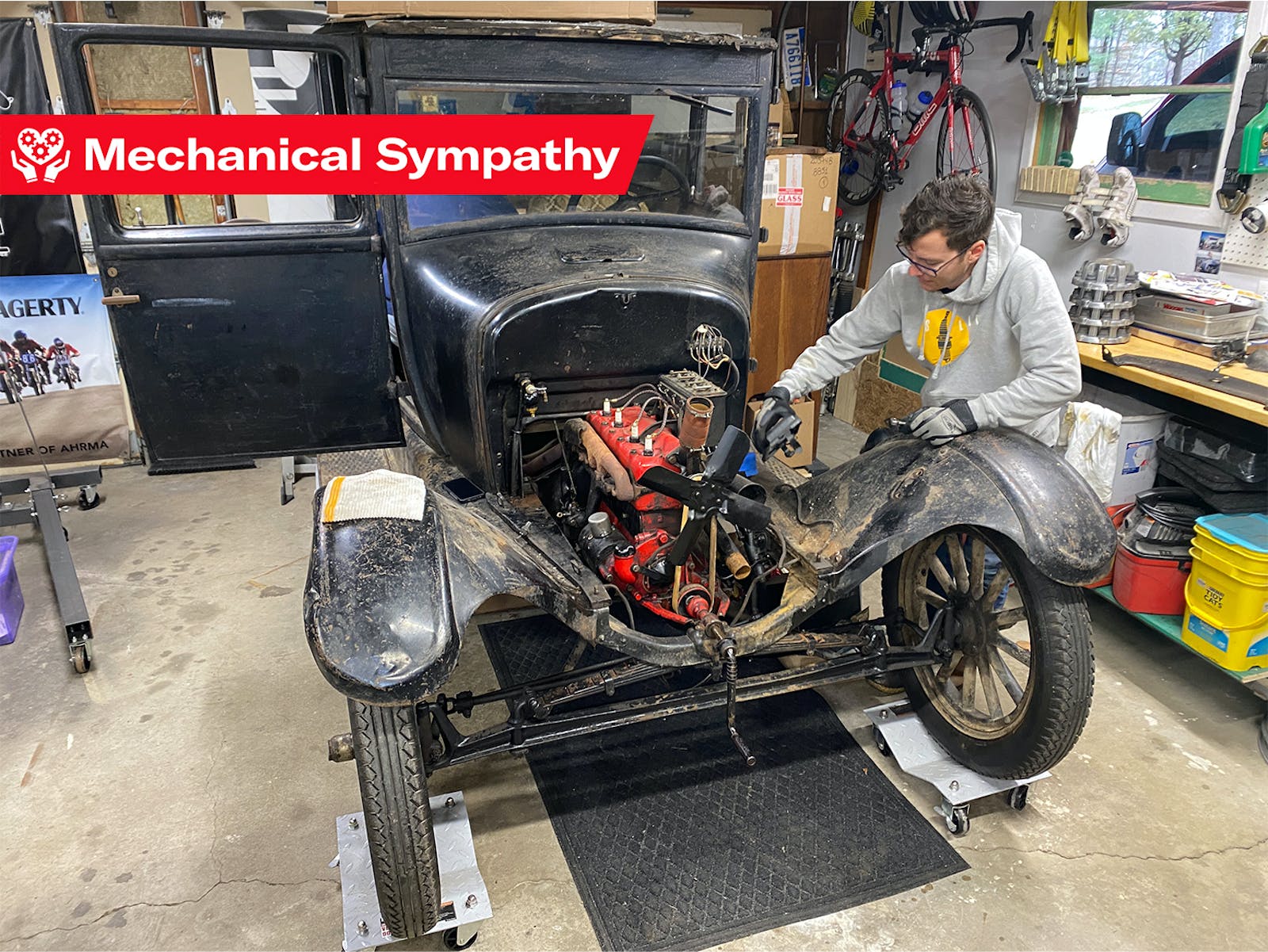 Mechanical Sympathy Enjoy your car, even when enjoying it requires changing it
Kyle Smith

Get an insurance quote
A Story About
Leave comment
Read next Up next: 5 hot rods you can totally make your own

I recently sold a long-owned and cared for car (99 Subaru WRX). I bought this from a friend a bunch of years ago, used it for everything, drove it and modified it and swore at it on the occasions it broke. But from the moment I decided that I was selling it, I considered it somebody elses’ car. So whatever they do with it after I signed the registration over to them is their business. Has it gone to a good home? Maybe. Will I have a tinge of regret every time I hear a loud boxer burble or see a blue/gold Impreza? Probably. But the reasons for selling it were solid, it was the right time.

Kyle, great article!
I have to say I was cringing at the questions Ben was asking. But you made me think about how it all started for myself as a kid in the 70s. Over time I have accumulated cars, trucks, motorcycles, boats, Outbords, snow machines, an ultralight plane, chainsaws, equipment, large Diesel engines, hit and miss engines and any other internal combustion engine that looked cool and made me want to take it apart to see how it functions and listen to it run or ride it.
I asked a lot of questions, in the ballpark but sometimes way off base.
At some point we all started, and will need to pass the torch.
Kyle well done for parting with that beautiful machine.
Ben good luck, you have a good eye. keep in touch with Kyle.
Or perhaps I help you one day.

1) Good on ya, Kyle, for setting the stage for Ben to learn the ropes (if it goes another direction, it’s not your fault); 2) Most – not all, mind you – of us started similarly, and that’s part of what makes the “old-car” (or motorcycle) community so special and close-knit; 3) get lost, Amazon, there is nothing more cool than that “smile” under the word Triumph on those old tanks! 😎