Avoidable Contact #149: Does this tired old Honda deserve to be “reimagined” by (a) singer?

My son will never know just how close he came to being humiliated in front of the whole subdivision.

The story goes something like this: Way back in 1981 or thereabouts, my best friend at school was this very tall and dour fellow named Scott. We both lived in a kinda-sorta upscale neighborhood. A lot of Saabs, VW Vanagons, 300SD Benzos. It was all a bit Peyton Place, and there was no shortage of social-climbing going on.

Scott’s parents didn’t buy into any of it. They made no concessions to “Morning In America” other than the acquisition of a very nice “hi-fi” system on which Scott and I would dub records from the local library onto Maxell UD tapes, XLII-S when the allowance money came through. They wore polyester clothes to church and ate simple meals. Oh, and they had just one car: a four-door late-’70s Maverick without so much as a vinyl roof.

In an era where most cars needed serious service work by “50K” or so, Scott’s dad was obsessed with getting his Maverick to 100,000 miles. When he got to 99,995, he did what any of us would have done. He took two ragged bedsheets, used black shoe polish to paint “100,000” on each one, then drove around the neighborhood with the bedsheets closed into the car doors so everyone could see his 100,000-mile Maverick. Honking the horn and yelling “ONE HUNDRED THOUSAND!” at everyone he saw.

And he made Scott go with him.

Keep in mind, in our school you could get bullied into a full-fledged fistfight just for putting lame stickers on your Trapper Keeper or having your mom buy you store-brand jeans, so this 100,000-mile Maverick stunt seemed tailor-made to ensure that Scott would finish the year in solitary confinement or, as they say, similar. It didn’t happen. Scott’s dad had gone past the event horizon of bullying-worthy behavior with this one. We all just kind of felt too bad to do anything about it. If anything, it improved his standing in the school. We respected his ability to deal with something so fundamentally humiliating while keeping his head high. Nobody talked about it.

Back to the present day: Once I realized that my supercar-taunting 2014 Accord V6 would hit 100,000 miles in the near future, I eagerly planned to do exactly what Scott’s dad had done, up to and including mandatory participation by my son. Figured it would keep him humble. Luckily for the boy, I ended up using the Honda for a quick work trip instead, ringing in the miraculous mileage somewhere close to the new Buc-Ee’s in central Kentucky.

Having received the recommended 100K timing belt and water pump service at the capable hands of Honnaman Automotive in Columbus, Ohio, the big coupe has never run better. I put the original factory wheels back on for the milestone, with fresh Yokohama Advan A/S tires. They’re great in the rain, but I can’t quite seem to break the 30-mpg mark on the roll with them. The last two tires I’ve used—Cooper Zeon all-seasons and Michelin Pilot 4S summers—both returned 31.0–32.5 mpg in consistent highway use at 80–95 mph.

Or maybe the engine is running tighter now that the valves aren’t ticking. It’s anybody’s guess.

Honnaman gave the Accord a clean bill of health, taking the carte blanche I handed over and deciding to perform under $1400 worth of service. The clutch release bearing is a little noisy, and I already have all the parts sitting around, but it’s not yet bad enough to address. In all other aspects this old grey coupe runs like a new car, fearlessly chirpin’ in third and displaying not the slightest sign of suspension-bushing degradation.

Too bad it looks so bad.

The right front fender and rocker panel are crushed, courtesy of an errant DoorDasher who was driving 40 mph the wrong way down a one-way Ann Arbor street while thoughtfully absorbed in her iPhone. (That curb-jumping avoidance move also cost me an O.Z. Racing wheel.) The rear bumper? That’s my fault. I backed right into the brick surround of my garage for reasons I still don’t understand. The chrome trim piece on said rear bumper was installed by a body shop in 2016 when some amiable stoner in a Mazda2 bumped me in dead-stopped traffic. It has decomposed into perhaps five different materials.

The cracks in my windshield refuse to meet. For months it looked like they would come together. Instead they’re performing a pas de deux.

The nose bears half a hundred rusty scars from where errant bits of gravel, debris, and cotton candy blasted through the Marysville Assembly Plant’s famously fragile and cheap paint. I’ve never been charmed at Honda’s unique strategy for getting people to buy Acuras, which simply amounts to making the house-brand cars on which they are based worse in all sorts of obvious and depressing ways. Lexus is a Toyota for people who got promoted, Infiniti is a Nissan for people with a FICO of 600–700 instead of the Altima’s 450–550 range, but an Acura is just a Honda with the paint and materials that it should have had in the first place.

The story isn’t much better inside. Much of the Accord’s fancy silver trim turns out to be paint that just rubs off over time. The carpet is worn down beneath the WeatherTech mats installed at purchase, a feat unmatched by any other vehicle I’ve ever owned. The “leather” of the seats and touch points looks and feels like pleather. In fact, to paraphrase the infamous “Brick Top” and/or Sam Houston, the interior material has all the characteristics of pleather—except durability.

A year or so back I ran the numbers on fixing all of the Accord’s cosmetic issues. The total number was in the $12,300 range. At the time I didn’t believe the whole car was worth that kind of money. Today? Let’s just say that Carvana is currently asking $23,990 for a car just like mine plus an ugly sunroof deflector. It doesn’t have 100,000 miles, but who cares? We’ve already established that these cars can shrug off a six-figure odometer reading.

It seems like a real shame to just let this generally decent Honda continue to visually deteriorate while remaining mechanically excellent. Why not spend the 12G and bring it back up to snuff? Rocker-panel incidents aside, I think I’d just be setting myself up to experience the same disappointment all over again. Why get a new factory Honda seat cover, for example, when the materials are so bad?

No, I think what’s called for here is a reimagining, something along the lines of what “Singer” does with crummy old Porker 964s and other companies are now doing with vehicles as diverse as the Ferrari 355 and the Ford Excursion. As far as I can tell, the rationale behind these “reimagined” cars boils down to:

a) New Porsches are actively horrifying to the kind of people who bought Porsches 30 years ago;
b) There has never been more wealth concentrated in the hands of fewer, and more frivolous, people.

Put those two factors together, and a $450,000 restyle on a $17,500 964 makes sense. I could do the same thing. What makes a “reimagined” car, anyway? Well, you need a little bit of work in the engine room, just so your owners don’t have to hang their heads in shame. The Singer folks will give you a 500-horse flat six. I don’t need that much, and I know from experience that I can wake up my Accord’s already-robust V-6 with the intake and throttle body from a 3.7-liter Acura. (See previous comments regarding Acura.) That plus a 93 octane tune should be good for about 330 hp at the flywheel. Maybe it will chirp in fourth!

Or I could leave it alone. My bone-stock Accord is slower than a new base Corvette, just like it would be if I tuned it, and just like every Porsche-by-Singer is. I don’t require the fig leaf of a tuned engine to justify spending big money on aesthetic-only items …

… like a truly decent paintjob with more than one microfiche-thin layer of watery clearcoat, for example. Honda only let manual-transmission Accord buyers choose from three colors, but I have the whole world as my oyster. Could do that nifty House of Kolor stuff. Or a vinyl wrap. Anything would be better than sanding down the pockmarked nose of this thing and inflicting another coat of “Modern Steel” on it.

The pleather-that-isn’t could all go, replaced by an interior fabric that I truly enjoy. Former Hagerty contributor and current Road & Track big-wheel Matt Farah had his “Safari” 911 upholstered with some sort of city bus fabric. Unfortunately I lost my sense of irony in a tragic childhood accident, so maybe I’d just order up something nice by Holland & Sherry. Or the Richard Anderson house tweed I used for a coat a few years back. Obviously it wouldn’t be “hard-wearing,” but that’s OK. The steering wheel and shifter could be redone in synthetic suede. Any interior paint touching-up could be done at the same time. If I got really ambitious, I could use the existing interior trim as a template to have real wood (or carbon fiber?) panels made. Maybe something in a 5A flame maple, the lightest possible stain.

Dare I try a new carpet? Something nice and fluffy to put under the WeatherTechs? That’s probably a waste. How about a few CNC-made logos in stainless steel or titanium? I think I kind of have to. “Honda Accord Reimagined By (Some Dude Who Was A) Singer (In A Sandwich Shop, Three Times A Week).” I could have all the exterior plasti-chrome redone in stainless steel, including that crummy-looking rear bumper finisher.

I’ll take further ideas in the comments. This wouldn’t be the dumbest thing I’ve ever done, though it would be close. Executed properly, this would be a combination of “Cars-And-Coffee catnip” and “invisible to law enforcement.” And the “Singer” arguments kind of apply, in an odd way: Honda hasn’t made a naturally-aspirated stick shift Accord in five years now. Heck, they just canceled the six-speed turbo sedan, which wasn’t that great to begin with. These V6 coupes are the last of a breed. They’re the Loofa-Cult cars of mid-sized Hondas!

Alternately, I could sell it. In this kooky, no-rules-apply market, I’m thinking $17,500. Skip the line at the Hagerty Marketplace and buy it today! I could use the money to do a “Mercury Milan, reimagined …”

Scratch that, I already did that. Just forgot to tell all of you about it.

Watch this space. If you need me in the meantime, I’ll be driving my Honda (and my son) around the neighborhood, festooned in bedsheets that read:

As they say, it’s never too late to have an unhappy childhood! 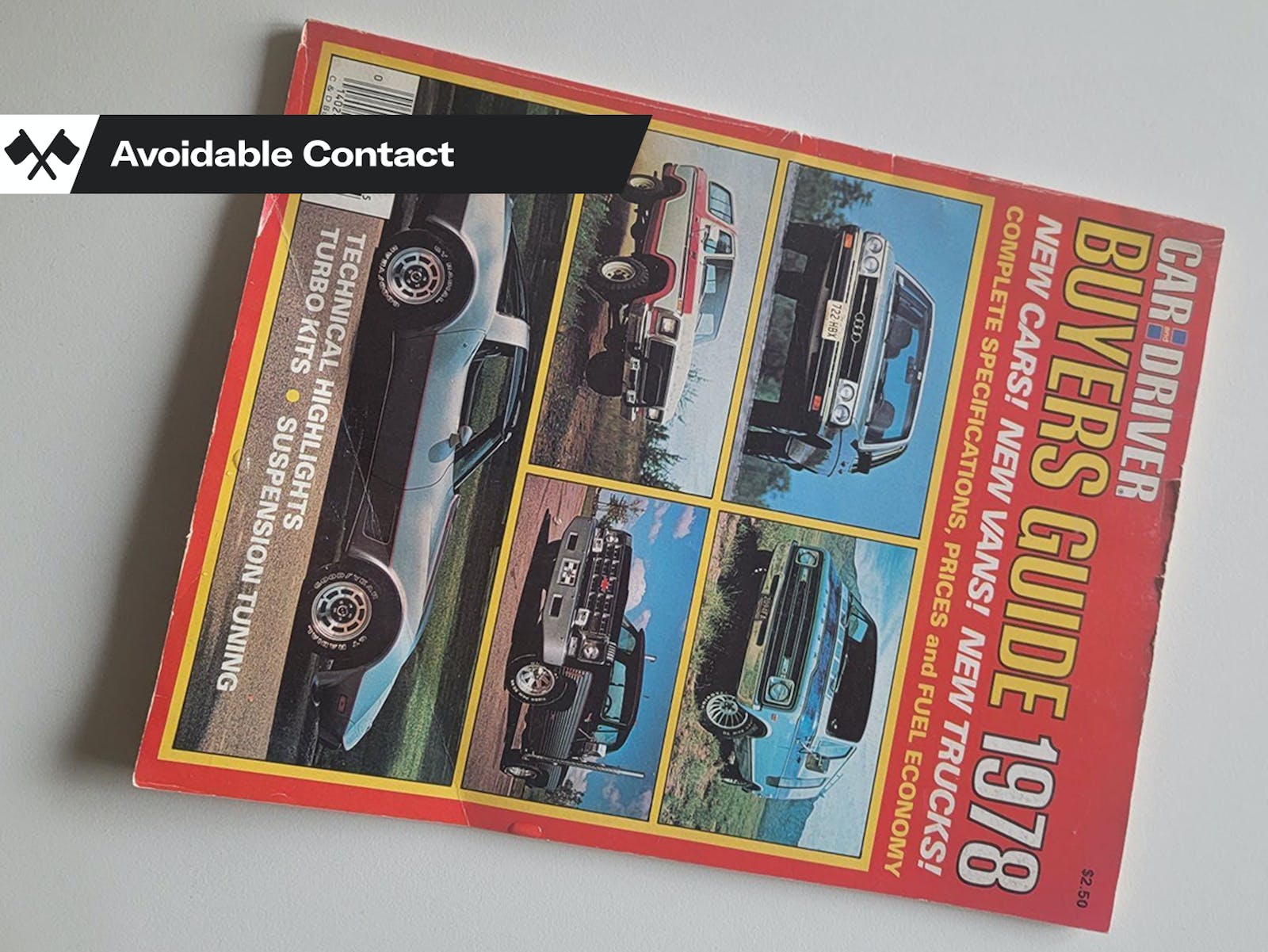 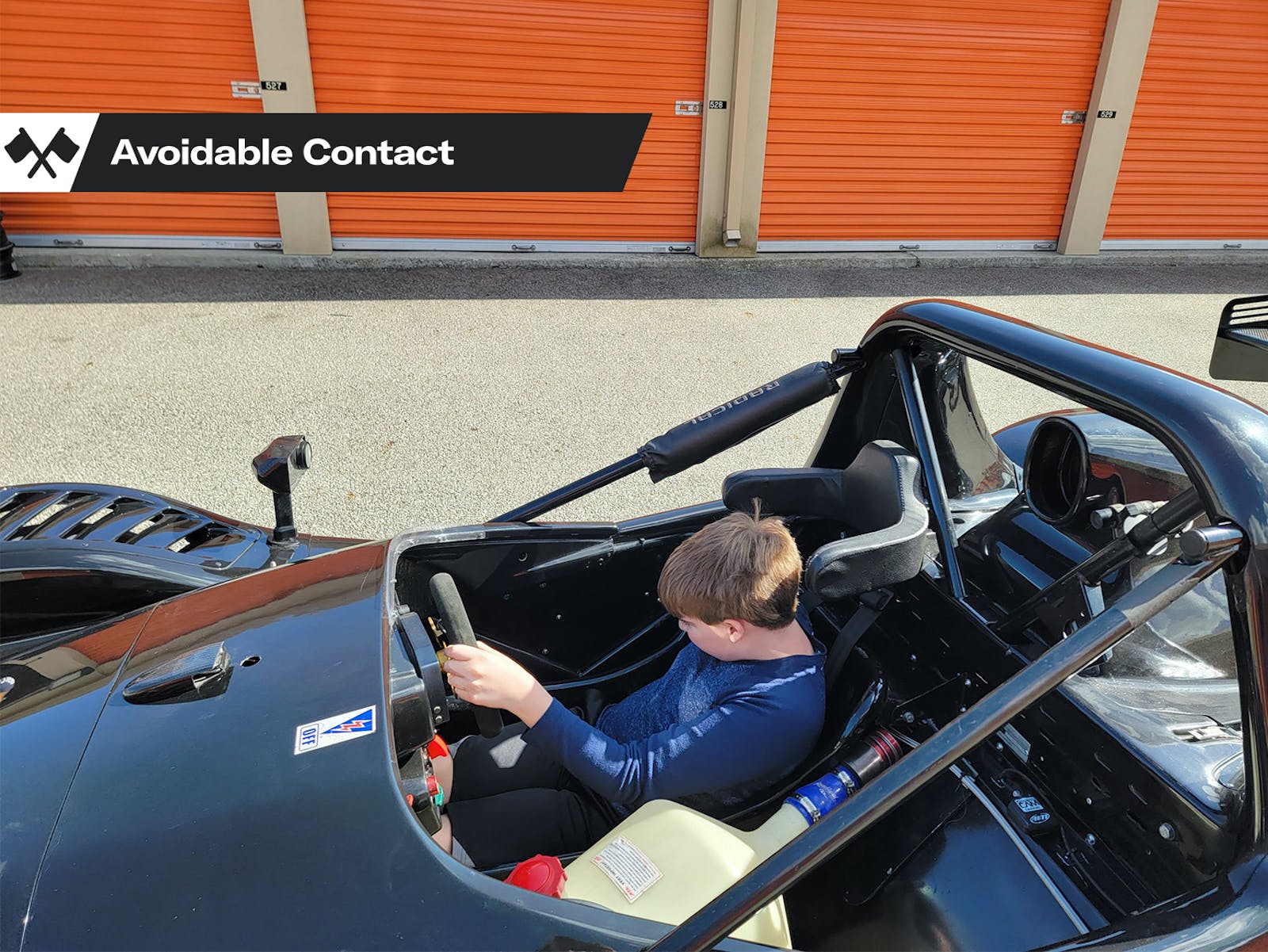 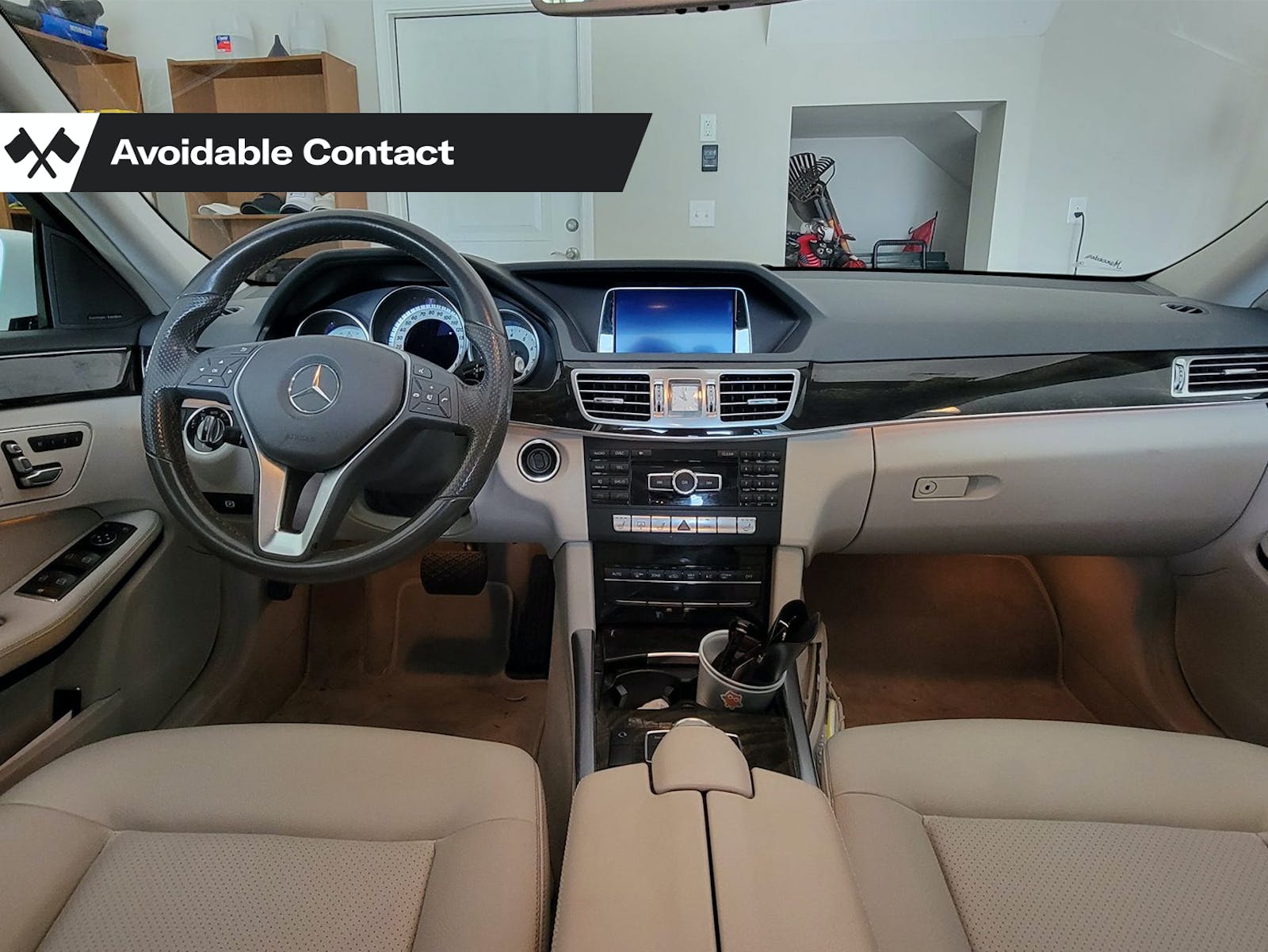