What comes to mind when you imagine a Rolls-Royce? Most likely quiet luxury and understated style. Iron-fist-in-velvet-glove performance. The Spirit of Ecstasy hood ornament. You probably don’t think of torpedoed passenger boats and love affairs involving British lords and artists’ models.

As the 1910s came to a close, Rolls-Royce decided its customers were getting too creative. Well-heeled patrons of the business had developed a taste for designing their own mascots and mounting them atop their motor cars. Rolls-Royce had an image to uphold, after all, so it commissioned a noteworthy sculptor, Charles Sykes, to design and realize an appropriate figurehead for the company.

Rather than sculpt something from scratch, Sykes decided to reprise a bronze statuette called “The Whisper,” which he had already completed for a Rolls-Royce customer, Lord Montagu of Beaulieu, mounting it atop his patron’s 1909 Silver Ghost. The figure was that of a young woman in flowing robes holding a finger to her lips. (The original Whisper statuette resides in the U.K.’s National Motor Museum in Beaulieu, and it looks more or less like this.) The figurine was based upon Sykes’ favorite model, Eleanor Velasco Thornton, who also happened to be Lord Montagu’s mistress. 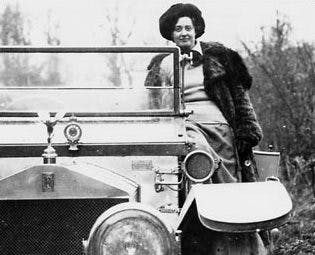 Eleanor died only four years after Rolls-Royce registered Skyes’ Spirit of Ecstasy as its official intellectual property in 1909—110 years ago to this day—when a German U-boat torpedoed the SS Persia, which was carrying her and Montagu across the Mediterranean on their way to India. Montagu survived—in part, rumor has it, thanks to a Gieve inflatable waistcoat recommended to him by his cousin Admiral Mark Kerr.

The figurine atop Montagu’s Silver Ghost would survive its real-life inspiration, and its descendants grace the hoods of Rolls-Royces to this day, though they are smaller than the 7-inch original (from the 2003 model year, measuring 3.75 inches) and rest on retractable pedestals.

Materials used in “The Flying Lady” have changed over the years, too. From 1911–14, The Spirit of Ecstasy wore silver plate, switching to nickel and chrome alloy when thefts became too common. Today, customers have a choice of stainless steel, gold-plated steel, or illuminated frosted crystal. The aftermarket, of course, offers additional, flashier options at even higher price.

Now that you know the story behind the Silver Lady, you might prefer the ghostlier option.

The Manifold Harley-Davidson in FTC’s sights over Right to Repair violation, Silverado EV IRL, V-12 Z3M that never was
Hagerty