Intake: That’s the question being asked by auction house RM Sotheby’s, which is selling a 1988 Porsche 959 Komfort for 995,000 Swiss Francs ($1,075,000). One of only 292 cars built in the more luxurious Komfort spec, the Group B rally-bred supercar was built for driving at serious speed over any surface thanks to its sophisticated Porsche-Steur-Kupplung four-wheel-drive system, which even came with a low-range gear for the toughest terrain. The double wishbone, coil-sprung suspension was also electronically adjustable for height and damping. Power came from a turbocharged, 2.8-liter flat-six with 444 hp and the owners of this car have certainly enjoyed it. The 959 lived its first 20 years in Germany, where it was regularly maintained, before having an exotic break in New Zealand for several years. It was acquired by the current owner in 2016 who shipped to Switzerland a year later. Since then it has undergone further work, totaling nearly $180,000. With 167,190 km (103,845 miles) on the odometer, it’s now being offered as a private sale a bit over its #3 (Good, or driver-quality) condition value of $925,000.

Exhaust: In a world of low- to no-mile collector cars, it is refreshing to see a car that’s been so thoroughly enjoyed. A meticulously maintained, high-mile car of this vintage is often less concerning to a would-be buyer than a low-mile example, whose perishable (read: rubber) parts would need immediate attention upon purchase. To someone who wants a 959 to drive, this Komfort is far more attractive than one whose odometer displays 1/10th of the miles. 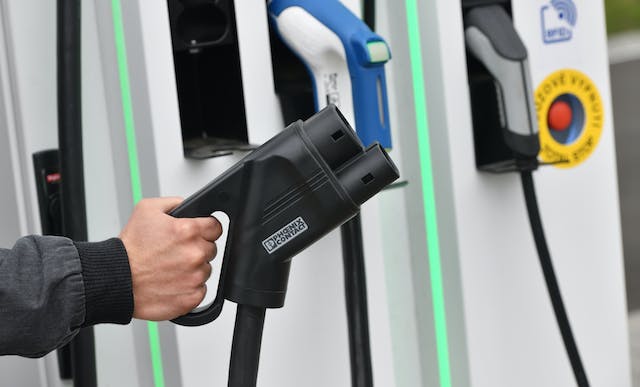 Intake: Quantum physics could make recharging electric cars even faster than fueling their gas equivalents, say researchers in South Korea. The technology, studied by the Institute for Basic Science, would charge every battery cell inside a car at the same time, whereas current systems require careful management to ensure they charge effectively. Even on today’s most rapid chargers the rate of charge decreases as the battery pack becomes “full” to protect the cells, which is why many manufacturers and charging networks highlight the speed at which they can charge for 10 to 80 percent, rather than 0 to 100. The boffins at the IBS say that an a EV battery with 200 cells would charge 200 times faster with a quantum system. That could reduce home charging from ten hours to just three minutes, while rapid charging on the go could come down from around 30 minutes to mere seconds.

Exhaust: With a promise to end range anxiety and revolutionize the EV world, this new tech would remove a major barrier to entry for potential buyers. But don’t hold your breath; it’s a long way from being ready. Advances in batteries are happening everywhere from Toyota’s use of solid-state cells in its plug-in hybrids to Israeli firm StoreDot, which promises to add 100 miles in just five minutes of charging. EV development is certainly accelerating fast and many buyers are wisely waiting to see what’s next.

Intake: Hot on the heels of its internet-busting GR Corolla announcement, Toyota slow-dripped some additional news for go-fast fanatics. This summer, Toyota Gazoo Racing North America will officially announce its new, single-make series, which will feature the Toyota GR86. Titled GR Cup, drivers will bang doors in identical, homologated versions of the company’s road-going coupe. Within Gazoo Racing’s quickly expanding stateside portfolio, GR Cup will also serve as a testing ground for Toyota engineers looking to wring more performance out of its production cars. So far, there are seven stops on 2023’s season slate, with battlegrounds to be shared on a later date.

Exhaust: While everyone is rightfully salivating over the GR Corolla, pro track-rats are likely to be more amped about these breadcrumbs. (Huzzah! An announcement for the future announcement.) Sure, a swarm of GR86s hopping curbs while wearing cartoon spoilers and oversized slicks will be an absolute sight, but the real excitement stems from the coupe’s attainability. Apart from spec-Miata, most single-marque racing leagues—like Porsche Cup or Lambo’s Super Trofeo—feature homologated exotics, often piloted by C-suiters and doctors. With an out-the-door price under $30K, the 2022 GR86 is an enthusiast’s car. And while no racing campaign is cheap, Toyota’s series will likely be easier on the wallet than its German or Italian counterparts. We eagerly await the next GR Cup news nugget from Toyota Gazoo Racing North America.

Intake: Say hello to the overhauled, 2023 model-year version of the HR-V, finally shown in full as of this morning. As we suspected from the teasers, it now wears simpler and far more handsome suit of sheetmetal. Honda’s also released technical details for the U.S.-market vehicle, which will be mechanically distinct from global-market HR-Vs for the first time thanks to its Civic underpinnings. The 2023 HR-V built for the states rides on a longer wheelbase than its Honda Fit–based predecessor and has a wider stance, though Honda hasn’t yet released full exterior dimensions. Underneath, the HR-V swaps the Fit’s torsion-beam rear suspension for the Civic’s multi-link rear setup. The mini-SUV will likely adopt the base Civic’s 158-hp four-cylinder, which, like the outgoing HR-V’s snoozy 141-hp inline-four, is mated to a CVT. Fuel economy should improve significantly from the 2022 HR-V’s 26/31 city/highway EPA mpg ratings, judging again by the 2022 Civic, which nets 33 mpg in the city, 42 on the highway, and 36 on average.

Exhaust: Whether you love or hate these high-riding buggers, the new, U.S.-specific HR-V improves on the outgoing model in looks and performance. Admittedly, based on the current model’s juvenile styling and anemic powertrain, that wasn’t difficult.

Intake: New vehicles sold in the United States will have to travel an average of at least 40 miles per gallon of gasoline in 2026, up from about 28 mpg, under new federal rules unveiled by the National Highway Traffic Safety Administration. According to the Associated Press, the new requirements increase gas mileage by 8 percent per year for model years 2024 and ’25 and 10 percent for the 2026 model year. With fuel prices at an all-time high, agency officials say the requirements will reduce gasoline consumption by more than 220 billion gallons over the life of vehicles, compared to the previous standards.

Exhaust: While NHTSA focuses on reducing gasoline consumption, some environmental groups still say the new requirements don’t go far enough to fight global warming. For context, and based on 2019 EPA numbers, the transportation sector accounts for 29 percent of greenhouse gas (GHG) emissions. Most of that figure is contributed by light-duty vehicles, which account for 58 percent of the transportation sector’s GHG emissions, with medium- and heavy-duty trucks falling second, at 24 percent. Automakers, on the other hand, argue that more stringent mpg requirements will drive up vehicle prices and push people out of an already expensive new-car market. Time will tell.

100 years ago, Mercedes put its supercharged engine on the starting line

Intake: Racing has always been about pushing limits, and 100 years ago Mercedes was brave enough to be the first to compete in the infamously treacherous Targa Florio with a supercharged engine. The the 1.5-liter M 65134 engine was equipped with two overhead camshafts controlling four valves per cylinder and produced 67 horsepower with the supercharger at full honk. This early “kompressor” engine won its class and proved that supercharger technology belonged on the starting grid. It later became common on the S cars the ’20s and ’30s, and even could be found on the Silver Arrow cars of the mid-1930s.

Exhaust: Supercharging was not new tech during the early 20th century. The additional cylinder pressure was especially helpful since, by modern standards, vintage engines used rather low compression ratios, so force-feeding air and fuel into the cylinders was the easiest way to increase power. However, that Mercedes entered an engine of this design in Sicily’s notoriously dangerous road rally—and finished successfully under seven hours—meant that the Germans had figured out how to make supercharging reliable, too. The early 1900s were an era in which race cars truly were testbeds for new technology, and the widespread adoption of superchargers on luxury cars in the following decades bears witness.