Intake: Thanks to four-wheel steering, Chevrolet’s Ultium-based EV pickup will be able to turn some neat parking-deck pirouettes. The whisper-quiet fullsizer will garner a few more looks, too, with optional, giant 24-inch rims. Unsurprisingly, Chevrolet is careful to specify that four-wheel steering is “available.” Translation? It’ll cost you.

Exhaust: The agility granted by four-wheel steering is primarily a boon for urban- and suburbanites maneuvering in tight spaces, rather than farmers out on the erstwhile range. (Yes, four-wheel steering is a bonus for trailering, but right now the range cost of towing with an EV makes it essentially a non-starter.) North Americans’ willingness to pay top-dollar for plush trucks is well-established, but will an electric truck meet their high standards of usability and practicality? The Silverado EV and F-150 Lightning have a lot to prove.

Skysphere is a two-for-one Audi concept

Intake: Audi’s new Skysphere is a transforming roadster with a split personality. The design is a futuristic interpretation of the 1930s’ Horch 853 roadster by Audi’s California studio, sharing the long hood with its predecessor but replacing its straight-eight engine with electrical power. In Sports mode the driver is in charge of 465-kW (632 hp) channeled to the rear axle. Put foot to floor and the Skysphere will accelerate from 0–62 mph in four seconds; drive a bit more tamely, and Audi promises a 300-mile range on a single charge. All-round double-wishbone suspension and a drive-by-wire steering system with changeable ratios and rear-wheel steering aid the car’s agility. Adaptive air suspension and 23-inch alloy wheels are also affixed to this radical roadster. At the touch of a button the Skysphere enters its GT mode as electric motors extend the wheelbase by almost ten inches. The steering wheel and pedals are hidden away and the car pilots itself, allowing both passengers to enjoy the view or pass the time online instead. The Skysphere is the first of three new concepts from Audi and will be unveiled to the public during Monterey Car Week on August 13.

Exhaust: The transforming car may not be an Audi innovation (just ask Rinspeed) but this Skysphere is still super cool. We wonder what it would look like in Bumblebee yellow? Autobots roll out!

No, Chevrolet is not plotting a coal-rolling C8 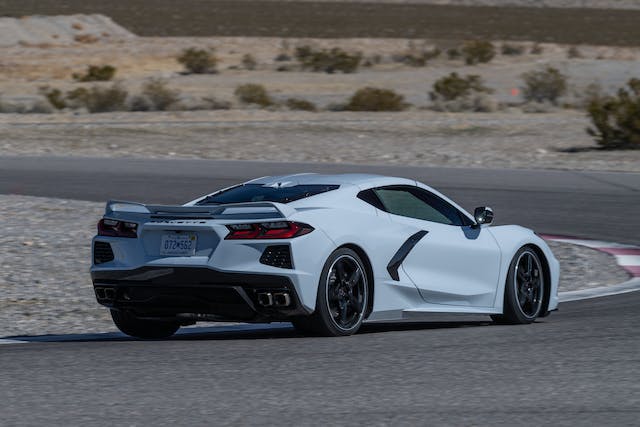 Intake: When he discovered an unused diesel glow-plug light on the instrument cluster of his midengine Corvette, a sharp-eyed C8 fan took to Reddit to share the mysterious symbol. The find was extra-juicy because no other Chevy product, as yet, appears to share this instrument cluster. The ensuing thread exploded with Euro-market jokes and wild speculations, in good internet tradition, and kicked up enough fuss that we reached out to Chevrolet to find out whether there any secrets were hiding in plain sight.

Exhaust: There’s no funny business afoot. As we suspected, this is an example of Chevrolet being smart about its dollars: this cluster is destined for other products and the diesel light was simply included for standardization. “It is not indicative of any plans to add the feature to Corvette and we plan to remove the icon in the future,” says Kevin M. Kelly, GM’s senior manger of of product and brand communications.

Intake: Nissan has revealed pricing for its recently revised midsize pickup, the Frontier. The minimum ticket to the Frontier party is $29,015 (including $1195 destination fee) for a Frontier S King Cab 4×2, which is marketing speak for the basest of base models. That’s tad higher than the competition’s lowest rung; you can get a Colorado for $27,880, a Tacoma for $27,615, and a Ranger for just $26,625. For a fully-loaded Frontier Pro-4X Crew Cab 4×4, you’re looking at $38,240—considerably less than Toyota’s top-of-the-line Tacoma TRD Pro, which rings in at a hefty $47,030 before options. Eager to get your hands on one? You won’t have long to wait—Nissan says the new Frontier will arrive in dealerships in September.

Exhaust: Early reports indicate that the revised Frontier is a superb midsize pickup, no longer the grey-muzzled mutt (on the outside, at least) of the pack. All in all, prices meet expectations—there’s a stripped-out work truck perfect for fleets that can be had for under $30-large, but you can also get a loaded-up, off-road capable Pro-4X truck for almost $10,000 less than the undisputed king of that category, the Toyota Tacoma TRD Pro. We’re looking forward to getting behind the wheel of the new Frontier to find out if the revisions have indeed made the Frontier the one to beat.

This Mk2 restomod is a Joyota

Intake: At first glance British restomodder Retropower appears to have done the unspeakable. For its Project Utah Mk2 Jaguar build, the company has thrown away the legendary XK6 engine and replaced it with one from … Toyota. However, take a good look at the 2JZ motor in the video above and you’ll see that, with its Jenvey heritage throttle bodies and custom exhaust system, it is a thing of beauty. More importantly, Retropower reckons that the 2JZ will be more reliable and powerful than the original unit. The bodywork has been decluttered and a pair of aerodynamic spats have been made to enclose the rear wheels, giving it a streamliner look, finished in stunning Aston Martin California Sage paintwork. Retropower has been documenting the entire build on YouTube for over a year, and it is finally approaching completion.

Exhaust: Retropower’s portfolio is impressive. The company has tackled an eclectic selection of restomods from Suzuki Samurais to W111 Mercedes, Camaros, and even a Mk1 Ford Escort for Gordon Murray. This Jag is in good hands.