The 2021 S-Class is the most advanced Mercedes ever

Mercedes has ramped up the tech on the all-new S-Class to the point where the company felt the need to recruit the founder of chip-maker Nvidia for its launch.

Jensen Huang describes being inside the new S-Class and using its sophisticated voice and gesture controls as being “like Tony Stark.” Exactly what Audi, which laid out millions to have Stark drive its cars on screen, thinks about that assessment remains to be seen.

Back to the Benz though, and while the S-Class is comfortingly familiar on the outside, it is a whole different story under the skin. The new car is over 100 pounds lighter than its predecessor, despite being packed with an incredible amount of equipment. The car’s classic sedan proportions and profile are an evolution of the outgoing W222 model rather than a revolution, even though it is a completely new vehicle. The keen-eyed will spot the new grille design (housing an array of lidar, radar and laser sensors). Slimmer headlamps employ Mercedes’ new adaptable Digital Lighting technology, while the rear lights are now slim horizontal numbers with fancy LEDs. The car cleaves through the air more efficiently than ever, with a drag coefficient of just 0.221.

Inside there’s a yacht-inspired feel, but the cabin is dominated by a central floating OLED screen and another large driver display. An augmented reality head-up display is included offering 3-D navigation. The sumptuous seats provide ten different massage settings and every passenger can access the MBUX system from a screen or by voice control. There’s an air filtration and ionization system along with perfume spray and a Thermotronic climate control system with 17 levels of adjustment for each of its four zones. A 250-LED ambient mood lighting system can also warn the driver with a color shift to red if the car senses danger.

There is such a bewildering array of individual settings that the new S-Class has introduced fingerprint recognition so that the car can quickly configure itself for driver and passengers. There are 19 electric motors in each front seat, so once you’ve finally got the driving position “just so” you won’t need to worry about someone else messing it up for you.

In some markets, such as China, the S-Class will even act as a concierge, with owners able to order food deliveries, cinema tickets and other services from the comfort of their heated massage seats. Over the air updates will be available for 50 elements of the S-Class from lighting to driver aids.

A Burmester 4-D audio system utilizes 31 speakers, including “exciters” in the seats for you to really feel the music. Cue Alicia Keys to give a little demo of the system, while also noting that with the sound off you can hear a pin drop inside the silent cabin. 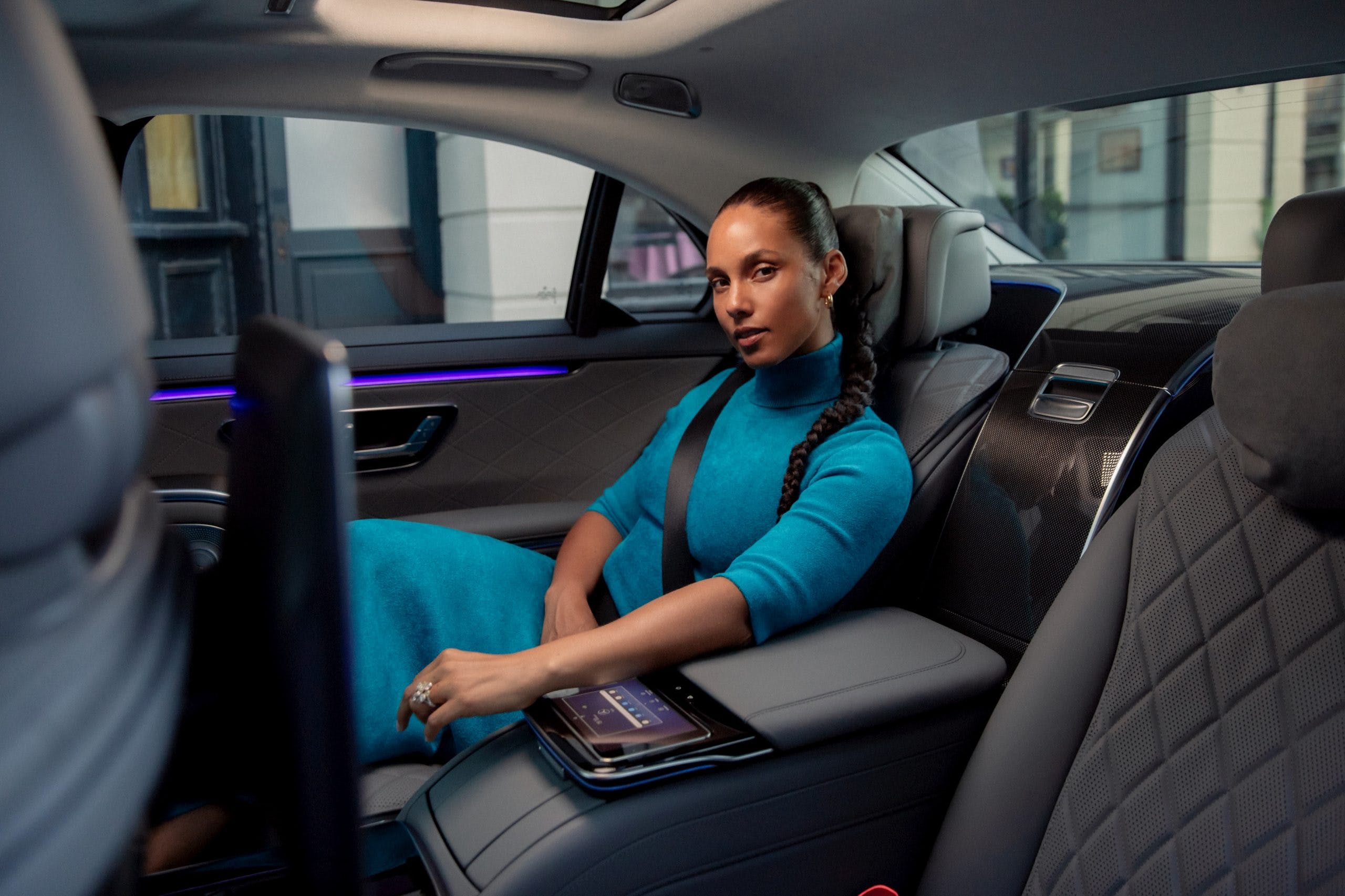 The S-Class has Level 3 autonomy baked in, for hands-off driving and, in Germany, will come with a Drive Pilot system that can remotely park the car. Strangely, Mercedes wheeled out its best driver Lewis Hamilton to demonstrate that feature.

Those that do like to drive themselves will be glad to hear that Mercedes 6.o-liter V-12 will live on in the new model, but a PHEV with a 60-mile electric range is also big news. A pure-electric EQS version with a range of over 400 miles will come later. At launch the U.S. will get a 3.0-liter straight-six with 429 hp or a four-liter bi-turbo V-8 with 496 bhp. Both are mild hybrids, with 48-volt electrical systems and integrated starter-generators.

The new S-Class will also feature E-Active Body Control, an active suspension system which can actually lean the car into corners, plus four-wheel steering for added high-speed stability and low speed agility.

World-first safety features include rear passenger airbags, a central front airbag, illuminated seatbelts, and a tweak to the Pre-Safe system which raises the car nano-seconds before a side shunt to allow the strongest part of the body to absorb the impact.

The new S-Class is a technical tour-de-force, built at the company’s most advanced plant, Factory 56, which uses 25 per cent less energy than other plants and is carbon neutral. More than 216 components in the car are made from recycled or resource-conserving materials. When Mercedes says that the new S-Class “Cares for what matters” they’re referring not just to its future owners, but the planet, too.

Get an insurance quote
A Story About
Share Leave comment
Read next Up next: The new Volvo P1800 Cyan is a reborn Swedish classic