Disclaimer: We’ve had trouble getting a Maverick from Ford’s press fleet, so I had Matt Fink rent the first one he could find. Since then, Ford has offered us a press vehicle, which I’ll be reviewing in the near future. In the meantime, enjoy this review of a real-world, unprepped rental Maverick, just the way you could buy it. — Jack Baruth

You may have noticed that trucks keep getting bigger, pricier, full of more features, and more profitable for manufacturers. Ford recently decided to go in the opposite direction. It created a front-wheel-drive, unibody-based “truck”, priced it for about $20,000, then named it after a forgotten compact car from the 1970s. Seems like a terrible business plan …

It was only four model years ago that Ford offered nothing in the way of pickups past the F-series. In 2019 it added the mid-sized Ranger, and comes the compact Maverick. Unlike the old Sport Trac, which was Explorer-based, this is a relative of the Escape and Bronco Sport. I’ll admit I was skeptical when Ford claimed it was a five-passenger front-wheel-drive “pickup”.

I spent three days driving around Las Vegas in an XLT all-wheel-drive version with the 2.0-liter EcoBoost I-4 and eight-speed automatic to see if Ford investing in this idea was as crazy as it sounded. Will it work to go totally away from the one-upmanship of the truck world and instead make a small inexpensive pickup? Spoiler alert: Ford looks to have a hit on its hands with the all-new 2022 Ford Maverick. I’m just not sure about the name.

The base powerplant is the hybrid 2.5-liter four-cylinder with 191 hp and 155 lb-ft of torque when combined with the electric motor. It is officially the cheapest hybrid vehicle you can buy. IF you can buy it, that is, as they are reportedly sold out until summer 2022. Otherwise you can get the optional 2.0-liter EcoBoost with 250 hp and 277 lb-ft of torque. Each of the three trims offer both engines, but all-wheel drive is only available with the EcoBoost.

The Maverick is low enough to get into the seat without needing side steps while still giving you a high view of the road. Height-wise it feels like climbing into a small SUV, not a truck. It doesn’t look or feel cheap for the price, to the point where I’m wondering how Ford is making any money on the thing. There are a lot of inexpensive hard plastics that fill the interior, but they are mostly hidden or used in interesting ways. There is a cool look to the hard plastic door cards with actual design elements in them that make it feel modern.

The seats are a little on the hard side and don’t have too much side support, but I still found them decent. The rest of the interior isn’t just large plain pieces of molded plastic; everything has an interesting flair to it. For example, there are five center console cubbies, including a nice vertical cell-phone holder, all covered by a removable rubber liner.

The center 8.0-inch touch screen is standard across all models, but I was surprised at how little it can do. The standard Apple CarPlay and Android Auto will probably be most drivers’ interface of choice.

Figuring a pretty capable truck with an actual bed and four doors would have to sacrifice something somewhere, I assumed it would be in the backseat space. Memories of my legs cramping up riding around Ohio University in my friend’s 1994 Ford Ranger, sitting on those tiny, weird side jump seats in the back filled my head.

I was pleasantly surprised to find riding in the back seat is not bad, as long as you remember this is a compact truck. At 6 feet tall, my knees do touch the back of the front seat if I try to sit behind myself, but it is very doable. Plus, the seat backs have a neat trick where they are actually a little concave, giving my legs a couple inches of extra space for a total of 35.9 inches of legroom. Rear-seat leg- and headroom are good for this class, with better legroom for rear passengers than in the larger Ford Ranger SuperCab or SuperCrew.

Another cool backseat feature is the hidden under seat storage cubbies. Ford claims they can hold things like a fully inflated volleyball, laptop bag, or even a fishing pole. The back-seat doors have a cutout in the armrest that reportedly can fit a rear bike tire into that space, allowing you to carry a bike in the back seat with the front tire off and seats folded up. You won’t find climate vents or charging ports in the back unless you add them as part of the XLT Luxury Package.

Making the Maverick’s rear seat functionality even cooler is what Ford is calling FITS (Ford Integrated Tether System). It’s basically these little t-shaped slots that can hold accessories. Under the seat is a QR code that leads to a website offering free 3D printer designs of stuff like cupholders or trash cans. Let me say that again, in case you missed it. From the factory, Ford is encouraging you to print your own accessories instead of buying them from the dealer. Even if it’s a gimmick, in a day and age when other manufacturers are trying to charge you a monthly fee for stuff like remote start, it is refreshing to see a company encouraging customers to build their own features instead of buying.

The tailgate isn’t going to offer a power option, but it is going to come with a built-in bottle opener! (Not kidding.)

The other cool thing the tailgate can do is be tethered at different angles to help hold larger items in the bed. Speaking of the bed it is 4.5 feet long, which is right in line with the Hyundai Santa Cruz (1 foot shorter than the Ranger). Ford calls it a Flexbed and inside there are side cubbies and 12-volt outlets.

It is also pre-wired for an optional 120-volt outlet, along with lots of bed tie-downs and holes, and a 1500 pound payload for all your DIY expansion needs. The Flexbed has stamped slots for lumber to divide up the available space horizontally and to create two-tiered storage, or section off with 2x4s. 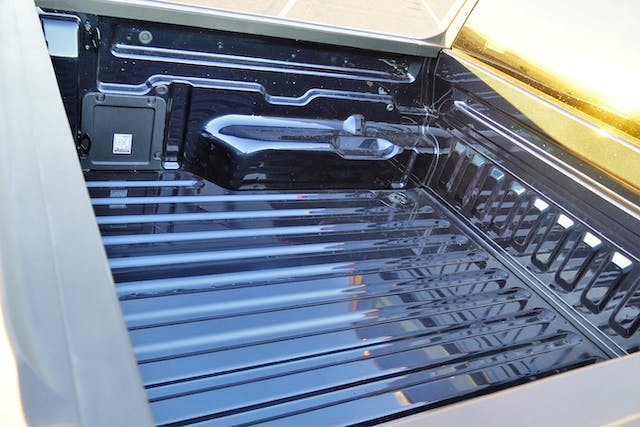 The bed arrives from the factory with a QR code that will show you videos of all the accessories you can add. If you need more than the 4.5-foot box, folding down the tailgate and using its built-in tie-downs extends it to 6 feet. Another benefit of this truck over its larger siblings is the lower load height (30 inches). It is remarkably easy to reach over the sides of the bed to remove items. 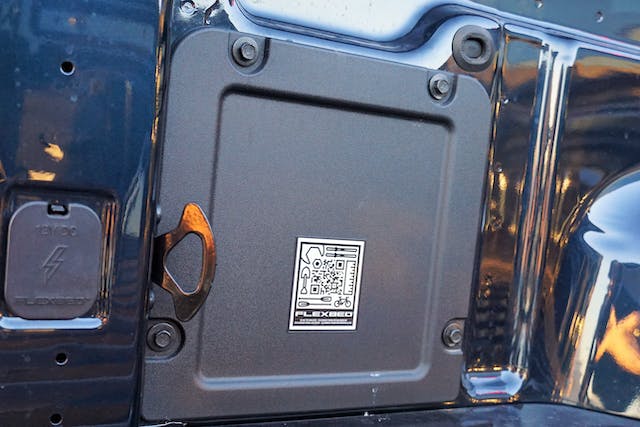 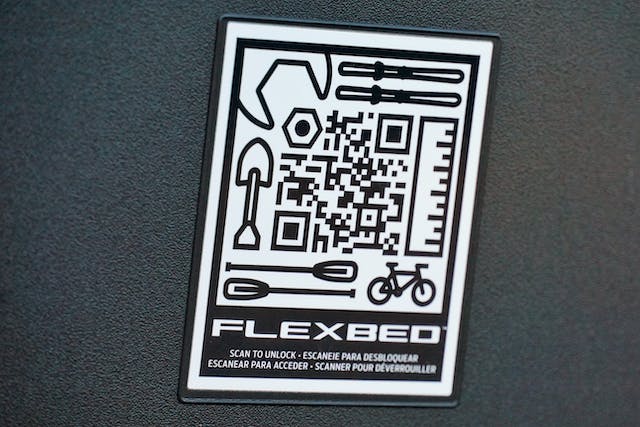 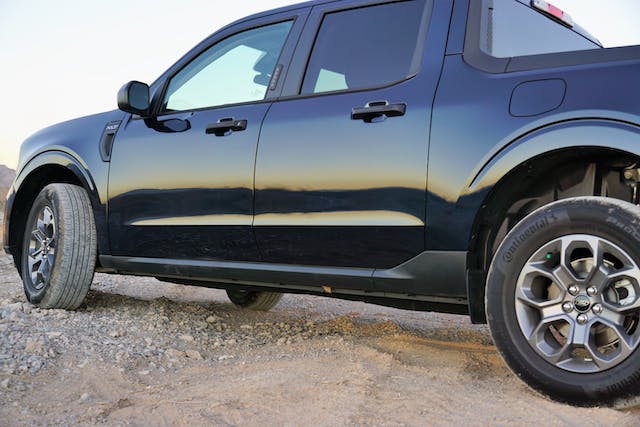 Built off the same platform as the Bronco Sport and Escape, the Maverick comes as front-wheel drive with all-wheel drive as an option. It has a few different drive modes that you choose via a button that has a picture of a flag, snowflake, or leaf on it (though I could not feel a difference). The Maverick rides on a tight four-wheel independent suspension with pretty firm steering. I know it’s just a four-cylinder pickup, but it feels faster than its quoted 7-second 0-60 time. At no point in the city, highway, or on mountain roads did it ever feel underpowered. On a more spirited drive in the desert, it felt totally planted to the pavement with no body roll, unlike most trucks. I kid you not … there were moments when this thing was fun to drive! 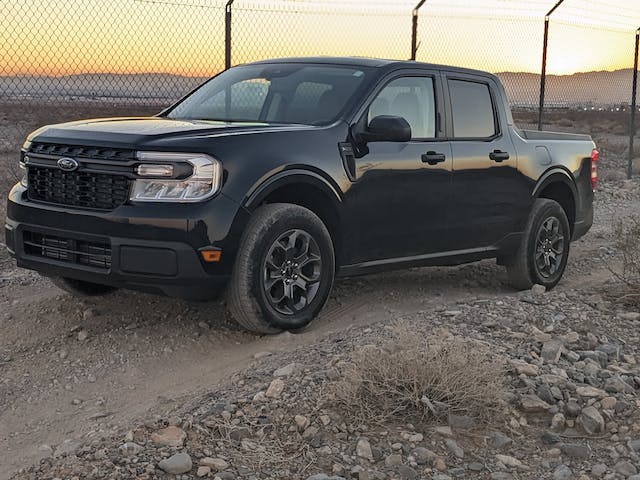 In the same way I know it’s not a sports car, I also am aware it isn’t made to go off-roading. But with unlimited trails nearby I couldn’t help but try some dirt paths and small hills. It handled everything with ease, seamlessly transitioning between front- and all-wheel drive when the front tires would slip on loose gravel or slide into ruts. The ground clearance is good for a compact truck, although I’m not sure how long the fabric covered plastic cladding on the underside would hold up if you did real off-roading. 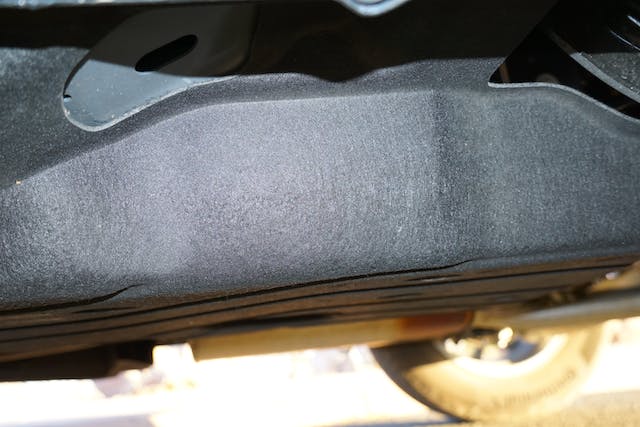 When equipped with AWD, buyers can upgrade to the FX4 Off-Road package, which includes all-terrain tires, upgraded suspension, hill-descent control, added Mud/Rut selectable driving modes, skid plates, upgraded engine cooling, front tow hooks, and a 4-pin trailer-hitch receiver. The thing I noticed the most while off-road was that the unibody construction seemed to prevent the expected head-tossing ride. 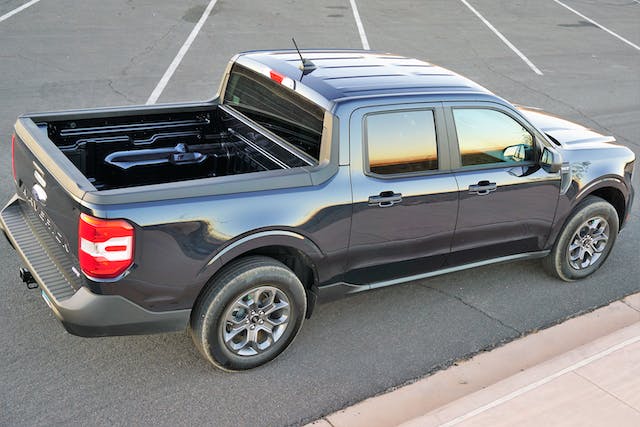 The Maverick will not trick you into thinking it is a luxury car, and that’s OK. It’s not super quiet, doesn’t come standard with heated seats, or a subwoofer, etc. It’s a simple entry-level truck. We’ve needed one of those. It’s all the truck a lot of people will ever need. 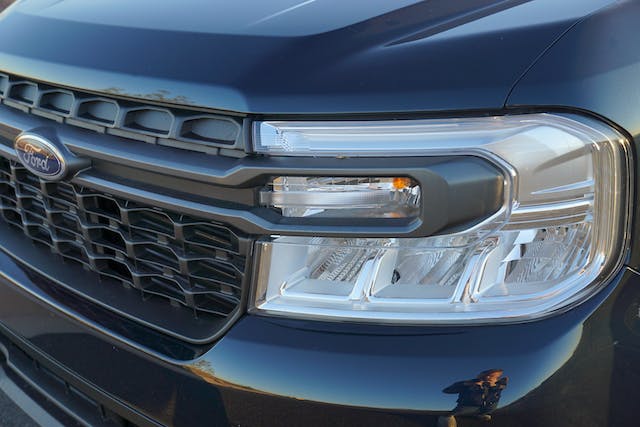 I would think small businesses will be standing in line for a Maverick. In my opinion this is the true successor to the early Rangers, but way better. I know I said I didn’t like the name before, but I think I’m starting to get it. The original 1970s Maverick was marketed as an affordable subcompact “import fighter” for the masses. This new Maverick incorporates some of those ideas: inexpensive, high gas mileage, fun design, but in a truck. The other thing those “import cars” brought was reliability and that is something we will have to continue to monitor on this truck assembled by Ford in Mexico.

To give you an idea how good of a price this is, a Ranger in 1995, totally stripped out in standard cab configuration and adjusted for inflation, would cost about $19,000 in today’s money. You can get a Maverick that’s about the same size (199 inches long now) but with four doors and a real back seat, infotainment system with Bluetooth, a hybrid powertrain, and a full array of safety features for $19,995. I tested the XLT which adds $2280, and going with the AWD and 2.0-liter EcoBoost engine cranks the MSRP another $3305. Competitors include the Hyundai Santa Cruz and … maybe a used Ford Explorer Sport Trac? If you are looking for a hybrid car, you may want to consider this truck. Where else can you get 42 mpg city for about $20,000? Plus, Ford says it can either hold 18 sheets of plywood, or an ATV. 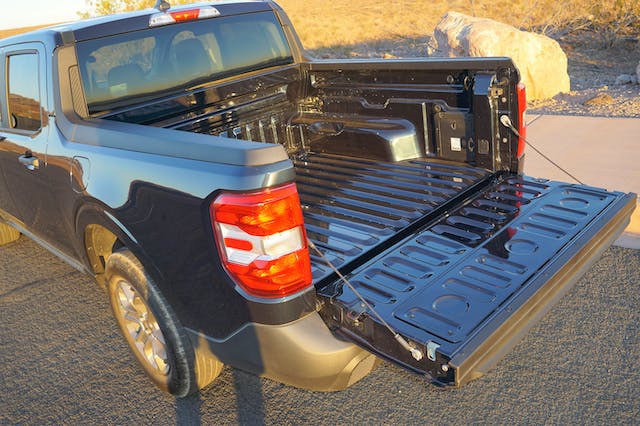 It might not be a “real” truck in the traditional sense, but this Maverick is definitely a first-rate low-price vehicle, with capabilities beyond that of the original Maverick or the previous-generation Rangers. That alone makes it worth some consideration.

Lows: Won’t haul or tow like an F-150, won’t ever be mistaken for a luxury vehicle, not featured on the show “Yellowstone”

Summary: This rather unique product by Ford is likely to be a big hit—and it will be imitated in short order. 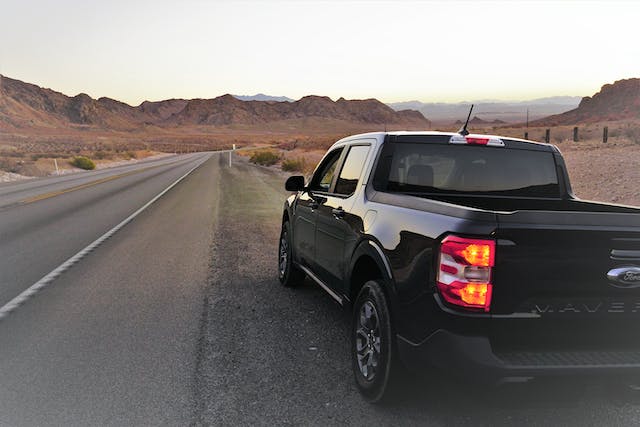 Get an insurance quote
A Story About
Share Leave comment
Read next Up next: 10 of the most extreme Dakar rally cars, bikes … and trucks

Xcellent review. Hit all the questions I would have for a seller. Well done

Maverick. Perfect. That is the car that I learned to hate Fords in when I was a kid, riding to High School in one. What did I hate about it: Everything. It was like the car came from the planet Mars and was just weird. I see the same crew that designed the car, still work for Ford because this truck is offensive in all regards, starting with the wheel covers. But there are people who don’t look for style or grace or even smart appointments. No, that Maverick was sold to the gal who drove it for the same reason: it was the cheapest new car on the lot. No, not much has changed at FORD.