Last year, for 2021, Mercedes-Benz introduced its AMG GT Black Series Coupe, a 720-horsepower track demon capable of 0-60 in an impressive 3.1 seconds. Even more staggering is its price tag of $325,000; the Black Series is the ultimate iteration of the AMG GT Coupe, and thus customers must pay a price as lofty as the supercar’s runway-sized wing. Not since the 2014 SLS AMG Black Series has black been so definitively back … albeit also available in several sizzling colors, from orange Magma Beam to a lime Green Light Magno.

Mercedes recently loaned us a 2021 AMG GT for review, dropping a sinister-looking coupe at our editorial office in Ann Arbor, Michigan. The slinky two-seater featured matte black exterior paint, black wheels, black calipers, and an interior slathered in, well, you get the idea. Cloth, leather, and carbon fiber—all midnight. It is, however, not a Black Series. Mercedes dubs this Bruce Wayne-worthy sports car the Stealth Edition. Given the heads this $137,000 coupe turns, we can’t say the moniker squares with our experience.

For the 2021 model year, AMG mildly refreshed its aging flagship GT—first introduced for the 2015 model year—with heightened performance and more standard equipment. The 4.0-liter, twin-turbo V-8 base model received a boost in ponies from 469 hp to 523 hp and a similar bump in torque, from 465 to 494 lb-ft. Adding to extra thrust, AMG tossed in the electronically controlled limited-slip differential, AMG Ride Control adaptive suspension, and “Race” drive mode previously included as standard in the AMG GT S.

And what’s a refresh without a special edition? To that end, the Mercedes performance arm out of Affalterbach doled out this Stealth Edition, combining Black Series aesthetics with high-performance grand-touring capability.

There’s a funny thing about stealth, though. Visit any airshow, and it’s the stealth fighters that get the most eyeballs. A $9150 option on the order form, the Stealth Edition cloaks the exterior and interior in AMG’s Night Package and boasts a bevy of other no-pigment-parts. Combined with the suitably menacing burble emanating from four black exhaust tips, the Benz draws curious gazes and howls from downtown alleys.

The smoked look and matte Graphite Grey Magno paint ($3950) indeed add something extra to the AMG GT’s attractive profile, which is more familiar in a classic Mercedes silver finish. The coupe’s design remains essentially gorgeous. Upon its original release in 2014, Daimler VP of Design Gorden Wagener cited the challenge inherent in trying to craft a new icon on par with the 300SL, arguably the most beautiful sports car of all time.

Borrowing some of the 300SL’s classic proportions, the GT sports an impossibly long nose, its A-pillar nearly at the midpoint of the wheelbase. Its bean-like greenhouse perched above the rear axle is similarly evocative of its gull-winged ancestor. Even without the wing or the aggressive front fascia that distinguish the full-attack Black Series, the Stealth Edition elicits just as many slack jaws as a new Corvette or 911 GT3.

It delivers smiles behind the wheel, too. We scored some track time with the black beast on the tight and twisty Waterford Hills road course. The big Benz is all about carrying momentum here, tearing through turns like a screaming German bowling ball. On the straights, you’re suddenly into triple digits with a braking zone fast approaching. This is where AMG’s seven-speed dual-clutch transmission shines; not only is it quick to bang off downshift requests from the paddles, it’s generally smart enough to handle cog-swapping on its own. Only twice during our multiple sessions did it stumble and leave us in the wrong gear upon corner entry.

Senior Editor Eddy Eckart—also a club racer—was particularly impressed with the AMG GT’s agility, relative to its size. “Placing that long nose is so critical in this car,” he says. “In that respect it’s unlike any other front-engine, rear-drive car I’ve driven.” Despite that, the Benz is more than willing to turn when properly coaxed. Eckart’s advice: “Get it pointed, rotate with gas, and hang on.” Even though the AMG GT Stealth Edition isn’t a pure apex eater like its more competent Black Series brethren, or even the track-oriented AMG GT R, it’s plenty proficient for a few track days per year. More important, it’s fun.

The onboard telemetry—including a throttle trace display—serves well to guide a driver of any skill level. We did, however, note that its pedal seemed a bit soft after hard use and—perhaps the biggest on-track knock—driver helmets consistently clanged the interior of the roof sill. You should also make sure to switch off automated emergency braking prior to any track use; even during mild-pace lead-follow warmups chasing Road Test Editor Alejandro Della Torre, the Benz flashed warning lights and bucked even with plenty of space between cars in the braking zone.

The ride home from Waterford gave us a chance to sample the AMG’s on-road manners. Comfort has to be a focus for any luxury performer, especially a Mercedes. Road noise is muffled well, especially for a low-riding sports car with a chassis this rigid. Engine noise, however, could be a bit more bombastic—or at least as full of character for the driver as it sounds for passers-by. “Could use more theater,” agrees Eckart. AMG’s not-too-rigid, diamond-quilted leather performance seats had plenty of bolster for the impromptu track day, but sufficient wiggle room for the highway drive home—a rare happy medium. The only awkwardness comes from the electronic seat controls on the side of the seat, which are tricky to operate once the door is shut. The plush steering wheel, reminiscent of cloth karting wheels, feels good, though fewer buttons on the spokes to prevent any unintentional tapping couldn’t hurt.

Unlike the new 2+2 SL, the GT sacrifices its back seat in favor of a more intimate interior. The GT convertible offers open air above, but you’ll be pleased to know that the coupe’s rear hatch opens to reveal decent cargo space for two, despite the shallow appearance. It’s no GT500 trunk, and the mid-engine Vette has the advantage of a frunk (not to mention half the sticker price), but the Benz has much more space in its booty than the Jaguar F-Type.

Over on the console, things are simpler. A large trackpad is flanked by eight buttons arranged in a V-shape to echo the engine lurking up front. This is a level of design detail most welcome in a six-figure sports car, and the mixture of physical buttons, climate controlling toggles, and one large trackpad strikes the right balance between streamlined and sensible. We only wish the flanking buttons were raised rather than recessed, as they have a propensity to catch crumbs and other detritus. The upscale Burmester audio system (a $1300 option) provides a clean, upscale sound, but given the tight cabin’s layout it lacks a certain fortissimo that’s delivered in larger sedans like the S-Class.

Speaking of sedans, a quick aside: Two years before the Stealth Edition or the Black Series, AMG introduced the AMG GT 4-Door, a raked-roof Panamera competitor riding on a modified E-Class platform. The four-door is bigger, more spacious, and more powerful in top-dog GT63 form, but it’s also a lot more awkward to the eyes, as if the GT coupe were mashed together with a CLS-Class. Mercedes would have done well to call it something else and leave the GT name to this handsome two-door.

Some may choose the GT because its styling is referential to Benz’s timeless 300SL. Others might want a road-going attention-getter with a taste of the pedigree that sees Mercedes consistently dominating GT3 competition or pacing the Formula 1 field. It’s certainly spicier than the more regal Lexus LC500, more carefully considered than the Aston Martin Vantage, and a stronger styling statement over the immutable Porsche 911. What’s clear is that Mercedes-AMG got this car so right eight years ago, when it first launched, that it remains every bit as satisfying as it is alluring.

Stealth? Sure. In no form, however, would we call the AMG GT a sleeper.

Highs: Looks amazing, sounds even better, gets plenty of attention

Lows: Interior is a bit cramped, ergonomics stumble here and there. Could use a bit more theater.

Takeaway: Black Series attitude with everyday appeal. Good luck flying under the radar in the AMG GT Stealth Edition (as if you ever really wanted to). 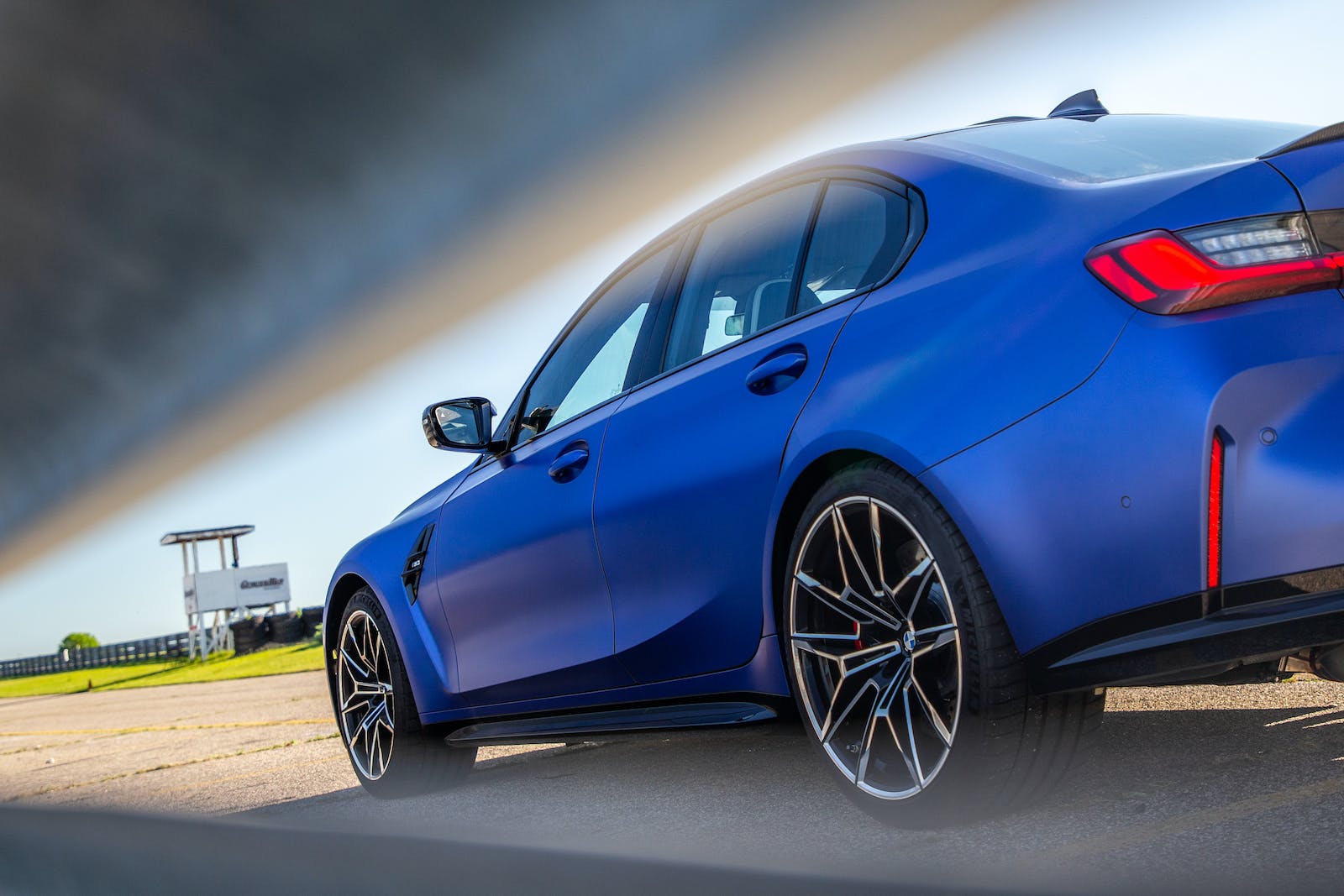 New Car Reviews Track Thoughts: There is nothing quite like the 2022 BMW M3
Sam Smith

Get an insurance quote
A Story About
Share Leave comment
Read next Up next: According to You: Tips for young enthusiasts in the car hobby

I’m not really a fan of the color. The backend needs some sort of spoiler to me. Looks like an unfinished 928 on the back.

I can definitely see the 928 comparison.