Forget the fabled Autobahn; if you want to understand the new S-Class, you gotta take it to the Hutch. Which in this case is not a piece of furniture, or a particularly well-painted BMX frame, but rather the Hutchinson River Parkway, a nineteen-mile traffic jam running from the Bronx to the Connecticut state line. The Mercedes-Benz S580 can show you all its tricks on the Hutch. Which makes sense, because about one out of five America-bound S-Class sedans ends up within a stone’s throw of here. All those romantic associations with S-Classes of yore — the triple-digit runs across Germany, the Serengeti-Driver-equipped businessman hammering a W126 between home and vacation home while his Becker blasts Brubeck, the narrator of John Updike’s The Coup who realizes a bit too late it is his silver SEL, not his uniform, that conveys authority in his country — well, they’re nice, but they don’t much correspond to reality as we know it in 2021. Better to hit the Hutch and see what you get for $116,300.

Well, here’s what you don’t get: heated steering wheel, upscale seats, the nice sound system, the nice instrument panel, the fancy wheels, power rear seats… I mean, there’s more stuff you don’t get, but I came up with the above list because all of that comes standard on a five-liter Genesis G90. If you want to equip an S-Class to Genesis levels, you should be prepared to spend about the price of two Genesis G90s.

Against this remarkable, but entirely business-as-usual, paucity of standard equipment, the S580 has one trump card: it’s a big fellow. Big on the outside, a full 208 inches long, a real pocket battleship to do battle with the 207-inch 7-series and the (also) 208-inch Audi A8. This new S-Class is bigger in pretty much every external dimension than its predecessor. Opt for the Mercedes-Maybach version, and you’ll get another wheelbase stretch. But this is enough. Inside, the S580 continues the traditional big-Benz practice of being made for the 98th percentile human. There’s a reason so many athletes drive them: short of a full-sized pickup or Range Rover, you can’t find more comfortable accommodations for larger human beings than you get with the S-Class. Your humble reviewer is six-two with gorilla arms and a barrel chest at the very end of Brioni’s ready-to-wear line, but I had plenty of room to stretch in the car. The competition doesn’t do this.

Not only is the Benz authentically spacious, it has a bunch of tricks to feel even more so. The 3-D instrument panel, which defies description in print but is utterly convincing and even a little vertigo-inducing in navigation mode, sits next to a massive more-than-Tesla-style center touchscreen with plenty of air behind both. The yacht-like sweep of the beveled wooden dashboard is designed to increase the perception of space at shoulder height. The rear seats have plenty of headroom, a minor detail that seems to have escaped the Asian competition. The doors do not protrude into your personal space, and the armrests are narrow, leading to two small annoyances: a bit of confusion as to where one grips the closing handle, and window switches that verge on the indecently delicate, like the ever-sharp, delicately masticating teeth of a peccary.

The external doorhandles, on the other hand, are massive industrial affairs that extend from the door skin on command and feel approximately as solid as the oversized, investment-cast and chromed devices found on the original Infiniti Q45. Sadly, they are the sole interesting details in an otherwise deeply forgettable-looking automobile. From the front, the S580 comes off as Benz-generic, only a little bigger and with a little more grille. The 2005 W221-generation S-Class was a delightfully Baroque and unmistakably upscale luxury sedan, but the W222 that followed was drained of visual character and this one is even more so. It in no way helps that the painfully bland tail section has already appeared in everything from the Mercedes CLA sedan to the Audi A3. There was a time when the S-Class set the style for the whole industry to follow; who can forget all the cladding we had to suffer through after the 380SEL brought it to our shores like an automotive-design zebra mussel that would burrow into everything from the Pontiac Grand Am to the Lexus ES250? By contrast, this car seems like a pastiche of other peoples’ ideas.

Not that it matters. If you have an S-Class, other people will eventually figure out that you have one. They will be jealous, and rightly so, because on the Hutch (yes, we finally returned to that) the S580 is master of all it surveys. The (optional) 3-D dashboard is a delight. The astounding heads-up display, which appears to be as wide and as far away as a full-sized SUV forty feet from your front bumper, displays a remarkable series of floating arrows that dip and wave as you steer before flying off into the distance to precisely indicate the exit you must eventually take. The (optional) Burmester sound system claims to be 4-D. It’s no better than what you get in a G90 but that’s like saying someone is no better at playing the piano than Hiromi Uehara. The seats, adjusted now by some annoying touch-sensitive seat diagram on the door rather than by the tried-and-true moving seat diagram that has been copied everywhere, are perfectly comfortable. This is the place to be.

And you needn’t pay much attention to your surroundings, because the S580 will faithfully take you all the way down the Hutch with no intervention other than the gentle, occasional reassurance of your touch on the steering wheel. Left to itself, the Benz will accelerate you from a dead stop to 80-plus miles per hour before braking you back down to zero, all while following the road perfectly, avoiding the idiot who overstepped the lane divider, and painting the traffic in your heads-up display with lovely neon green and red outlines to signify following distance and whatnot. It’s like being on a train, except this train has quilted leather, double-pane glass, and a panoramic sunroof ahead. (Note: Mercedes-Benz doesn’t go all Open Sky with this sunroof. There’s a substantial rollbar that doesn’t line up with the B-pillars but appears capable of supporting the S580’s inverted weight with room to spare.)

There’s so much effort put into everything you touch, although you’ll want to spring for a few options to get the full effect. The turn signal is a polished aluminum barrel set into a skeletal aluminum lever. I spotted at least eight air vents at eye level, with soft-touch electronic buttons to control their flow. The steering wheel is a work of art in and of itself, although one occasionally senses the Mercedes engineers reaching for a solution to a problem that didn’t exist. Case in point: This car has no volume knob. Instead it has a touch-sensitive slider on the right spoke of the wheel that can also be pressed through a click to mute the system. In practice, you will blow your passenger’s hair back with volume several times, Maxell-advertisement-style, before mastering the art of touching the slider correctly. Your average heart surgeon will have no trouble with it.

The S-Classes of yore were renowned for their rock-solid demeanor at outrageous speed and the alacrity with which such velocities could be reached. Certainly the S580 can accelerate in a hurry, courtesy of a revised four-liter twin-turbo V8 developing 496 horsepower and 516 lb-feet of torque across a broad, computer-controlled plateau. The transmission is a bit reluctant to downshift, but that’s part of the brand DNA for a company that used to make all its sedans start off in second gear unless otherwise directed. A new rear-axle-steer system allows the S-Class to flip a you-know-what in very narrow conditions despite its size, and it also makes high-speed lane changes a bit less exciting, but the rest of the suspension doesn’t exactly impress. At speed, the S580 is prone to some rather disquieting body float, as if the suspension computer simply never became familiar with the concept of “rebound damping”. Which means that you can find yourself writing a check with the steering wheel that the available traction can’t cash until the body settles its two-and-a-half-ton weight diffidently back on the Escalade-size rolling stock. No doubt the upcoming AMG variant (as opposed to the largely cosmetic “AMG package” cars available at launch) will address this to everyone’s satisfaction. There’s a hybrid coming as well, although M-B reps were tight-lipped on the subject.

What’s available now? In addition to the S580 that was made available for Hagerty to test, there is a $109,800 S500. This is a three-liter inline six with a turbo and an electric turbo on top of that, making 429 horses and 384 lb-ft of torque. Both variants have 4Matic all-wheel drive and the EQ 48-volt system that can throw 21 extra horsepower into the mix when necessary. There have been times in the past when six-cylinder S-Classes made a lot of sense; in particular, I’m thinking of the W220 short-wheelbase S350 whose poverty-spec equipment and indifferent motivation seemed well-matched to the deliberately dismal demeanor of that unpleasant, cost-chopped platform. For this new car, however, anyone who fails to drop seven grand on the big engine should be required to justify their decision in triplicate. You’ll want to get all the options while you’re at it. Imagine having a 2-D dashboard in your S580! What is this, a Chevrolet Citation II?

In a world where the wealthy increasingly insist on the same vehicular elevation long granted to owners of a Jeep Wrangler or an F-150, this comprehensively realized S-Class amounts to little more than a love letter to the firm’s most devoted and particular customers. This is no cause for concern; rather, we should appreciate the fact that it exists at all. In a perfect world, it wouldn’t look so timid, but perhaps this po-faced mien will help the S580 slide unnoticed by protestors or demonstrators or what-have-you. It is hard to imagine an existing S-Class owner not being thrilled with the new model. The potentates and billionaires will want the Mercedes-Maybach variant, complete with extra wheelbase, yacht-club interior, and two-tone paint. It’s the one to have in Dubai or Moscow — but here on the Hutch, the S580 will reign supreme, and rightly so. 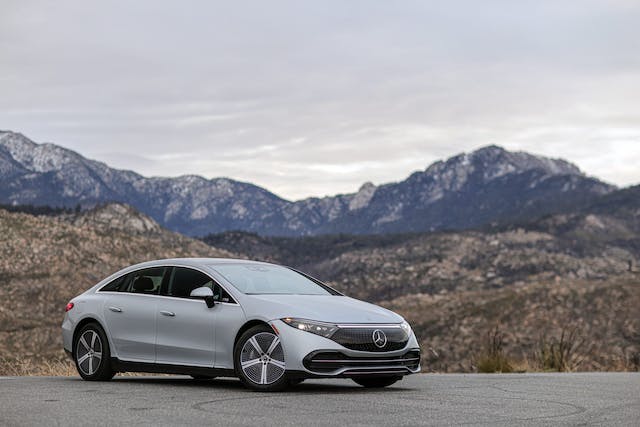