The Greatest Spectacle in Racing – Indianapolis 500

With the Indy 500 this weekend, I’m feeling especially passionate about telling others to get there in person someday. I believe Indy to be one of those special experiences that you have to see in person to appreciate. I’ve attended about every professional sporting league and motor sports series, but the Indy 500 stands out as something special.

Speeding at the 500 – Personal History

My personal journey to the Indianapolis 500 began before I was even born. It was way back in the 1930s when my great grandfather was a mechanic for various teams at the event. 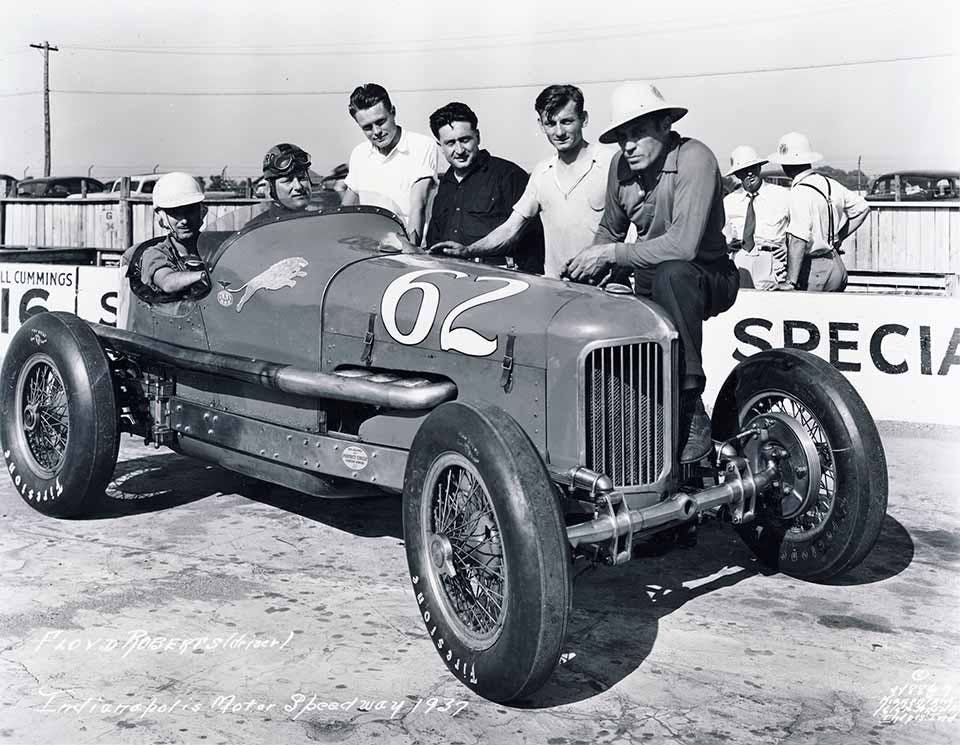 My Great Grandpa Fink is the first one on the left standing up, from the 1937 Indy 500. Floyd Roberts was the driver that year finishing 13th  and winning $600. Yes, it does appear the driver is wearing a hard hat… safety-first boys!

In those days one mechanic would actually ride with the driver during the race, while another mechanic was in charge of warming up the car. My great grandfather was the one who took the car out before the start and found himself really enjoying the speed on the track. After passing a few other mechanics going into turns while clearly pretending he was in the real race (don’t act like you wouldn’t have done the same!) he was pulled off the track. Yes, for speeding. While driving on the track at the Indianapolis Motor Speedway. Makes me proud to be a Fink! Not many people can claim they were punished for speeding while on the track at Indy. That love for motor sports was passed on to my grandfather, then to my father, and now I’m working on my kids.

My father began taking me to sports car races at the age of 9. Early on he would tell me stories of Indianapolis. He said the cars were so loud that the grandstands physically shock when they went by. As a kid, that actually made me quite nervous and I remember telling him I didn’t want to go to Indy. Let’s stick to the Mid-Ohio Racetrack dad, where my seat stays perfectly still thank you very much. Well, my dad knew better than that. He started by having me watch the 500 for a couple years. Back then I would choose who I was going to root for based on the color of their car. Pretty quickly my favorite became little Al in that Valvoline car. I’m going to assume all kids in America rooted for him because somehow we felt he was like us. Ya know, raised by a millionaire Indy 500 winning racing legend father… just like the rest of us. Finally in 1992 my dad took my brother and I to our first Indy 500.

For years the Indy 500 was held on a Saturday out of respect for local churches. In 1974 the owner was given the blessing of local churches to hold the event on a Sunday. So when we went, we felt it only right to support a church by paying to park in their lot. They would then drive you to the track sitting on folding chairs in the back of a rented U-Haul box truck. Pretty sure you couldn’t do that today. With over 300,000 people trying to find parking spots, every front yard within 2 miles of the track has a kid trying to get you to pay $20 to park in their lawn.

Our tickets were on the inside of turn 4 (those seats don’t even exist anymore). Not great, but we were there. That also meant we had to walk through the infield. The infield, well, has a certain reputation. As we came up out of the tunnel to the infield we were approached by a man using a keg of beer like a unicycle riding it around greeting fans. There were thousands of fans that had been partying there for days. Many I assumed would never actually know there was a race going on around them. Due to the sheer number of people wearing shirts asking women to remove clothing, my Dad had to keep my eyes covered for much of the walk to our seats.

The one thing you know for sure is that when you’re at Indy, you’re experiencing history. For my first trip to Indy, that meant attending the coldest Indy 500 in history. Of course this was 1992 and weather.com wasn’t around yet so we were wearing shorts and t-shirts in 37-degree windchill that day. No worries, Dad had a fix for that. Taking extra trash bags out of a nearby can, he tore a hole in the top and put them over our heads. Boom! Instant windbreakers. To be clear, he did NOT win ‘Father of the Year’ that year. Who am I kidding, he took us to Indy, who cares if he dressed us in trash bags he should have at least been in the running.

Before the race even began 2 cars wrecked on the parade lap, including one right in front of us. I was hooked. The first time by the cars were so fast and so loud it was hard to distinguish any one car from the mass of colors blurring by. It was an adrenalin rush and it was when IndyCar racing became an addiction to me. The sights, sounds, smells, and colors were incredible. That 76th running of the Greatest Spectacle in Racing is most famous though for the battle between winner Al Unser, Jr. and Scott Goodyear. It was also the record 35th consecutive and final start for AJ Foyt. The cold temps and high winds turned the race into a crash-fest. In other words, exactly what a 12-year-old kid would love. Being on the inside of the turn severely limited our view that’s hard to describe unless you’ve been there. We could see cars lose control and hear the tires screeching… but never actually see them hit the wall. We couldn’t even see any scoring stands to tell who was leading; we had to rely on those listening to radios nearby to shout out the standings. The race ended with the narrowest finish in Indy history, .03 seconds. To compare, over 100 years ago at the first 500 the winner had a 13-minute margin of victory.

Walking out of the race 20 years ago I saw a guy carrying out a race used wheel and tire from a wrecked car. Sure it’d be cool to catch a foul ball someday, but this guy was taking home part of the car! To this day my dream is to get a wheel and tire from an Indy car and put a piece of glass over it for a coffee table.

Many years, just making the field is a huge feat. We went back the next year to cheer on our local hero and former Indy 500 winner Bobby Rahal but he failed to even qualify in the top 33. Note to other racing fans, IndyCar does not give a free entry to past champions. They have been doing things the same way for decades. Even the track itself has never changed since it was built over 100 years ago. Still exactly 9 degree banking in 4 identical corners around the 2.5 mile track.

As an adult, I have taken others including even non-racing fans to experience the 500 and they have all loved it. We watched from the outside of turn 4 in 2013 when a record was set doubling the most lead changes in history with 68 between 14 different cars! Would I like to go to Monaco someday? Of course, but you may not see 68 lead changes in a whole season of F1.

The fans at Indy are passionate and knowledgeable and they have their favorites. Despite the engine noise, in 2013 you could hear the crowd roar every time Tony Kanaan took the lead. Maybe it’s because he led the 500 ever year from 2002-2008 yet had never won one until that year. Or maybe it’s because he’s a laid back middle-aged man that men like me somehow feel like we can relate to.

In 2016 I was able to take my father-in-law and 6-year-old son to the 100th running of the event. I mean it is still the world’s largest single-day spectator sporting event, how could a kid not love this? And. I. Was. Right. He loved every second, and didn’t even complain about the 2-mile walk to our seats.

Why You Need to Go Someday

Well, to experience history. There is a chance you could see the qualifying lap record of 237mph set by Arie Luyendyk broken. This year Scott Dixon averaged 234mph. In practice last week Conor Daly hit the fastest trap speed every recorded at 244mph! That’s something you want to see in person.

To see the size of it. Indianapolis Motor Speedway (IMS) is the world’s largest spectator sporting facility. You can fit the Rose Bowl, Yankee Stadium, all the courts at Wimbledon, the Kentucky Derby, the Roman Coliseum, and all of Vatican City… just in the infield at Indy.

To people watch. In my great grandfather’s day, everyone came to the track wearing full suits and hats. Now you will see people like this:

For the tradition. Indy sticks to their traditions and that’s part of what makes it great. During the singing of ‘Back Home Again in Indiana’ you will hear grown men crying in the stands. You will see the only event where the field starts 3-wide. You could witness the winner drinking the milk, see the team kiss the bricks, be there when the winner gets the keys to keep the pace car, and so much more…

It’s more than a race. The parade of bands around the track begins at 8am and there are on track activities up until race time. You may even get to see a childhood hero like Parnelli Jones drive by.

For the danger. Today’s drivers aren’t quite the dare devils they were 100 years ago, but there is still something about watching a race that you know has had so many horrific wrecks over the years. TV doesn’t do justice to how fast a pack of cars at over 225mph looks.

Because it’s cheap. I couldn’t get over the fact that you can bring in coolers to the track. I literally saw hundreds of people carrying cases of Natty Light right to their seats. That’s some cheap entertainment.

If you’re not into the race (then I can’t relate to you), you can pay $40 to get into the infield. There you will find bands playing, sand volleyball courts, zip lines, fair rides, and more than a few people using a keg of beer as a form of transportation.

When you go, get there early. The race starts just after noon, but there is obviously a lot of traffic. Indianapolis does know what they are doing after putting on the event for a century and it’s not as bad as you’d think though. Plus you want to be there for all the pageantry. You will need to time to get into the gate. There was probably 20,000 people trying to get into the one gate we came through. As race time got nearer, they just stopped inspecting bags and just let everyone in. Safety first?

I have another son who is 6 now. Looks like I need to plan another trip to the Indy 500.

And here’s a video of the 1939 Indy 500. Warning: this is a little graphic. Crazy how lightly they treated death in motor sports then.

Get an insurance quote
A Story About
Leave comment
Read next Up next: 1935 Auburn 851 Speedster: Simply Spectacular