In October 2019, Jorge Eduardo Muñoz rode his BMW motorcycle through the night from Aguascalientes City, Mexico south to Oaxaca to deliver a steering box for a disabled 1965 Volvo 122S. Just hours before, Chris and Jeff Mason had crashed their race-prepped Swedish sedan during qualifying for La Carrera Panamericana—a modern revival of the legendary sports car race across Mexico that ran in the early 1950s. A frantic search for a replacement box turned up just one; it was in a rusted Volvo at a BMW restorer’s salvage yard … 10 hours away.

The yard owner pulled the part, and at 4:30 the next morning, Muñoz arrived with it at the Masons’ location. Chief mechanic Tim Ritchie and race mechanic James Kelly from Vintage Racing Services in Stratford, Connecticut, which had prepared the car, performed the mechanical surgery—in the rain and in time for the team’s 8:20 a.m. start. Muñoz was there to see off the brothers. Until that day, he had never met them. He was the last link in a chain of friends and strangers that had scrambled on the brothers’ behalf to locate the vitally needed component.

That chain began with Angelica Fuentes, the navigator for a La Carrera Studebaker team. When Fuentes learned of the Masons’ crash, she began making phone calls, networking with other teams, and posting on social media in search of a fix. Two hours later, steering box in hand, Muñoz made his ride at the request of his brother’s college friend, Julian Castillo, the official photographer and producer for the Masons’ racing effort. Castillo is also part of a new media company with the brothers, called Elemental, which recently released a half-hour documentary about their 2019 race. The film offers insights into La Carrera and the cooperation and communication needed to make a team successful.

Saved by the Spirit

What the Mason brothers had experienced is well-known in the race community as the “Spirit of La Carrera.” It is a kind of unwritten code that race teams help another team in need. Carrera fans like Muñoz and the salvage yard owner, Julio Hernández, are well versed in the Spirit.

“When we first started working on doing the Carrera, Angelica [Fuentes] was one of the first people I was introduced to,” recalls Jeff Mason. “She told us, ‘You’re going to love it, and you’re going to learn about the Spirit of La Carrera.’ It was pretty overwhelming to be on the receiving end of it.”

Adds driver Chris Mason: “In an instant, everything we had done to that point, a year’s worth of preparation, was put into jeopardy due to one mistake. Our race was in the hands of people we’d never met, and who didn’t know us, who put their lives on pause to get us to the starting line.”

The Rally Brothers, as the Masons have branded themselves, went on to complete the grueling 2000-mile race, taking third in the Historic A+ class and 40th overall out of 69 starters. That was a move up from their first run at La Carrera the year before in the same Volvo, in which they took fifth in class and 46th overall. Either of those results could be considered a noteworthy achievement for a couple of beginners. As a matter of perspective, three 180+ mph Studebaker coupes in the Turismo Mayor class swept the podium in the 2019 race, followed by three Porsche 911s, then three more Studebakers, two more 911s, a few more Studebakers and 911s, and a half-dozen Mustangs sprinkled in between. The mix is similar every year.

Built from 1957–70, and dubbed the Amazon in its home market, the Volvo 122S enjoyed considerable success in period as a rally car, winning several European championships. In 1964, a 122S won the Canadian Shell 4000, named for the number of miles covered in the transcontinental rally. Volvo advertised the rally successes to tout the car’s durability.

The Masons’ modified and race-prepped Volvo, which remains street-legal, can hit 140 mph. “We could make the car faster, but we are not fast enough yet,” says Chris.

“As we talked, it became clear we shared an appreciation for the beauty of the race and a vision for how the story could be told,” recalls Jeff Mason.

The documentary then became the foundation for a business to chronicle the stories of other La Carrera race teams. In this year’s race, the group followed three teams, including that of navigator Fuentes and driver Gabriel Pérez Torres in their Studebaker. (The Masons took the year off from La Carrera in 2020, but they’ll be back for the 2021 race in the Amazon.)

The original La Carrera Panamericana ran from 1950–54, promoting Mexico’s newly completed Panamerican highway. Top European and American brands competed, enlisting many of the world’s top drivers. Lincoln, for example, was a multiple winner in the Large Stock class, including a 1-2-3 sweep in the 1953 race.

Unsurprisingly, the combination of unsafe cars driven at high speeds on public roads, with minimal spectator safety, resulted in significant carnage. Over five races, 27 people lost their lives, including racers, officials, and fans. After the tragic crash that killed 80 spectators at the 24 Hours of Le Mans in June 1955, La Carrera Panamericana was canceled, seemingly for good.

A new version of La Carrera returned in 1988 as a seven-day, 3000+ km open road race for pre-1975 cars equipped with modern safety systems. Today there are classes for some current cars, too, including Minis. This is no laid-back vintage car tour. La Carrera Panamericana, which includes transit stages and speed stages, remains very much a demanding open-road race for drivers and navigators. Far better safety measures have greatly reduced the destruction that plagued the early 1950s races.

“There’s no prize money,” says Chris as a reminder. “You race for the sheer enjoyment of it and the pleasure of your own success. People respect that and support that in every way possible.”

Jersey boys with a need for speed

The Mason brothers grew up in Morristown, New Jersey, a quiet, leafy suburb 30 miles west of New York City. After college in New York, Chris, who is the older of the pair by three years, settled in Venice, Italy, to work as a custom furniture maker. He also maintains a home in Purchase, New York.

Chris is also the “car guy” of the duo and has owned numerous European sports cars. His collection currently includes an MGB and a Lancia Fulvia. The hot-rodded ’69 Chevelle that Chris drove in high school, however, is the one his younger brother Jeff most fondly remembers. Though they never knew their father—who was a stock car racer in the 1960s and 1970s—both brothers feel they were influenced by a connection with him.

Jeff lives in Denver, where he runs his own marketing and graphic design firm. (He created the branding materials for their race team, “Driving La Carrera.”) Recently, he became chief operating officer of The Piston Foundation, a non-profit group fostering car culture by supporting grants and scholarships for apprentice programs, STEM initiatives, and other activities.

When Chris expressed an interest in rallying several years ago, a mutual friend referred him to Kent Bain, founder of Automotive Restorations, Inc. and Vintage Racing Services. ARI is renowned in the collector car world for its concours-winning restorations, and its VRS division has been building and supporting La Carrera race cars, including Volvos, for nearly 30 years.

“Kent urged me to do the Carrera, for the opportunity to race on open roads and also for the experience of the interaction with Mexico,” recalls Chris. “He said it was mind-blowing, and it was.”

For a navigator, Chris considered only his brother, who took a day to think about it before committing. At Bain’s suggestion, the brothers took the Bertil Roos Racing School five-day course and also practiced at Brian Redman’s Targa 66 at Palm Beach International Raceway in Florida. Started in 1991 by champion driver Redman, Targa is a venue for owners of vintage and modern performance and collector cars who want to enjoy high-speed track driving without racing. The Masons rented a Triumph Spitfire and a rally-prepped 1966 Volvo from VRS for several days of track driving.

“We liked the Volvo,” recalls Chris. “Up until then, we hadn’t decided on a particular car for La Carrera. Kent advised us to go with a four-cylinder car, because the bigger-engine cars have a tendency to end up off the road.”

At Targa 66, another participant approached the brothers offering to sell a 1965 Volvo 122S that had run La Carrera in 2011. Bain says the Volvo was a good start but needed an updated roll bar, chassis tweaks, and new rally equipment. VRS has built, maintained, and supported several class-winning La Carrera Volvos over three decades, including Volvo 544, 122, and P1800 models.

“We knew what parts could last and which ones could not over 3000 kilometers (1863 miles) of hard driving in La Carrera,” Bain says. “We also upgraded ergonomic accommodations for Chris and Jeff and used some more durable components.”

The Volvo’s B20 2.0 liter engine was modified to produce 185 horsepower, up from its original 85. The engine features higher-compression, custom-made rods and pistons, a ported and polished cylinder head, and dual Weber 45 DCOE carburetors. It pairs with a five-speed manual transmission and 4.11:1 axle ratio. The chassis is upgraded with vented Wilwood disc brakes, adjustable Koni shocks, and custom sway bars. Panasport wheels give the ideal ’60s vibe. Better skidplates offer protection from topes, the infamous Mexican speed bumps. Once they’re inside, the brothers strap into Cobra seats.

“The goal was to have a car that was not more than we could handle. We’re not race drivers,” Jeff says. “Momentum is key,” adds Chris. “In our class, there’s always a VW Bug. They’re lighter, on a shorter wheelbase, and also [have] a two-liter engine. They can go around corners faster, but on the speed stages, we can carry more speed through curves.”

The brothers also praise the Volvo’s comfort, particularly along the transit stages that can exceed 400 km (250 miles) through mountain switchbacks and over less-than-perfect roads.

The New York license plate, “MZCALERO,” is the car’s nickname. A mezcalero is one who makes mezcal, a beloved Mexican liquor distilled from agave. The moniker for the car began as a kind of joke suggestion, but the brothers happily adopted it. “We’re not mezcal producers, just drinkers,” laughs Chris. “But people loved the name.”

The Masons marvel at the way Mexico’s people embrace all La Carrera racers. A festival atmosphere hovers above the race as it moves from city to city. At each stage, teams mingle with spectators to sign autographs and hand out “hero cards” featuring photos of the cars and team information. Throughout the country, people follow the race on social media and root for favorite teams.

“Kent told us, ‘You will never feel more welcome anywhere than when you’re racing La Carrera,’ and he was right,” remarks Jeff. 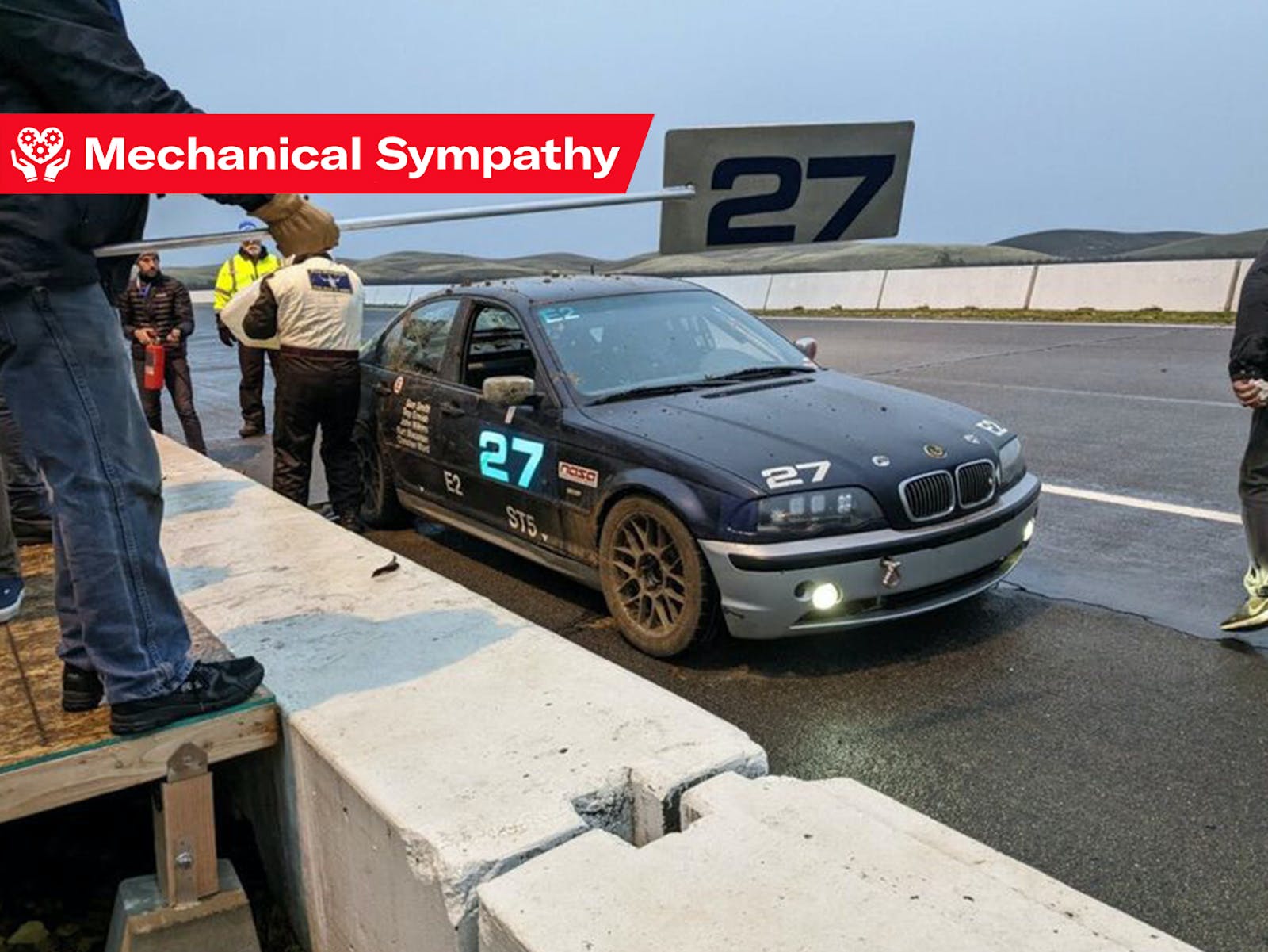 Get an insurance quote
A Story About
Share Leave comment
Read next Up next: How we’d EV swap this old-school Detroit Electric with new-wave tech