How Lewis Hamilton’s $6.6M McLaren ranks against the most expensive F1 cars

The 2021 British Grand Prix will surely go down as an unmemorable affair with no incidents of note whatsoever, so it’s just as well RM Sotheby’s was able to put on a show with the sale of Lewis Hamilton’s 2010 Turkish Grand Prix–winning McLaren MP4-25A.

Uniquely, spectators were treated to a demonstration run by the car during the auction itself, which took place after the 17-lap sprint race on Saturday. Adding to the drama, McLaren test driver Rob Garofall treated the crowd to a display of the car’s striking Vodafone livery and 2.4-liter V-8 soundtrack—an unmistakable wail that makes today’s F1 machinery seem as though someone has pressed the mute button.

Chassis #01 was taken to victory by Hamilton at the Turkish Grand Prix in 2010, but also secured a fastest lap and second-place finish at the Chinese Grand Prix. Later in the season, Hamilton’s teammate Jenson Button secured another podium, taking third place at Abu Dhabi.

Among the car’s features is its status as an “F-duct” car—the infamous and deeply clever aerodynamic device that allowed a driver to stall the car’s rear wing for greater top speed by covering a hole in the side of the cockpit.

It is the first of Hamilton’s GP-winning cars to be offered at auction, so the price paid comes as little surprise. Nevertheless, the sale still fell slightly short of the £5 million to £7 million presale estimate—perhaps, given the action on Sunday’s race, buyers would have been pumped up further had the auction taken place 24 hours later.

Even for £7 million, it’d have undercut any McLaren F1 road car to have sold in several years, but Lewis’ car didn’t quite reach the heady heights achieved by five other Grand Prix cars sold at auction, either …

While Hamilton’s old steed went for big bucks, “it has a long way to go to beat the top car” says Hagerty’s Manager of Automotive Intelligence, John Mayhead. While not all Formula One cars—pre-F1 Grand Prix cars top the list—it’s clear that the ceiling for cars from the top tier of motorsport rises higher than a race-winning Hamilton McLaren.

“It should be noted that these are the biggest public sales,” Mayhead also adds. “Others have taken place behind closed doors.” 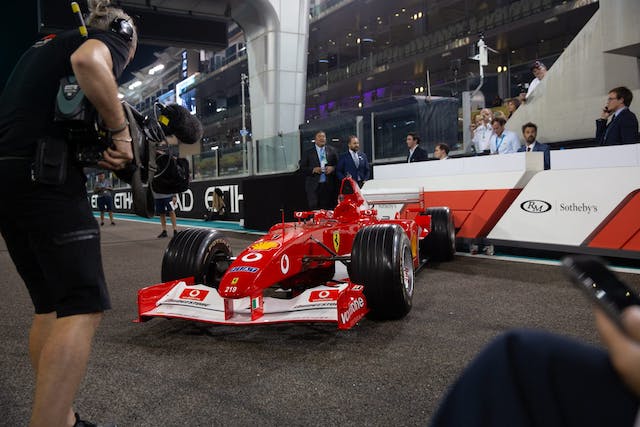 And here’s the other, sold in Abu Dhabi in November 2019. Its $6,643,750 was equivalent to just over £5 million at the time, putting it narrowly above Hamilton’s car. The F2002 had victories in San Marino, Austria and France, and a portion of the sale went to the benefit of the Keep Fighting Foundation. 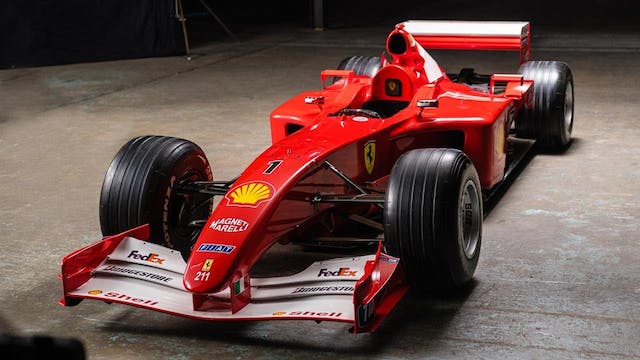 RM Sotheby’s suggests that only one F1-era car has sold for a higher price than Hamilton’s McLaren, when an ex-Michael Schumacher Ferrari F2001 sold through RM Sotheby’s for £5,449,607 in 2017. That sole status isn’t quite correct, as the car below demonstrates, but apparently the Schumacher and Ferrari combination is irresistible to bidders.

At the Pebble Beach Concours in 2016, this matching-numbers, Brianza-bodied Alfa 8C sold for $11,990,000 (approximately £9.2 million). It was raced by a string of Italian owners between 1933 and 1950 and retained a host of original components and spares.

While just short of its ten-million estimate, this works Grand Prix Type 59 achieved an incredible £9,535,000 result with Gooding & Company in 2020. An incredible history, including competition in the 1934–35 Grand Prix seasons and King Leopold III of Belgium’s name in the paperwork, contributed to its remarkable sum.

The most expensive Grand Prix car ever to have sold at auction, this ex-Juan Fangio W196 sold at the Goodwood Festival of Speed through Bonhams in 2013 for £19,601,500. Fangio took victory at the French Grand Prix in the car’s first outing at Reims-Gueux, Mercedes’ first Grand Prix since 1939.