The Abarth 124 Rally is an angry Italian sensory overload

We recently headed to Skip Barber Driving School at Willow Springs International Raceway for a track education day. We’d get a bit of instruction, hit the skidpad, and autocross in the Abarth versions of the Fiat 124 and 500, and then take the lessons to the Streets of Willow road course. We were in. But that was far from the most electrifying Italian experience we got that day.

As much fun as driving the little turbocharged Abarth twins were, the highlight of the event was the hot laps we took in the passenger seat of the Abarth 124 Rally with Skip Barber Chief Instructor Terry Earwood behind the wheel. After getting his start in drag racing, Earwood competed in numerous road racing series and has 45 years of competition experience—and nearly as much time spent as a driving instructor.

While the Fiat 124 Abarth production car is a civilized roadster with sound deadening and a fun but modest 168-horsepower 1.4-liter turbocharged four-cylinder, the 124 Rally is a stripped-down, 350-hp animal. It’s powered by a 1.8-liter version of the four-cylinder normally found in the Alfa Romeo 4C, this time mounted longitudinally.

With only about 2300 pounds to haul around it feels a lot more powerful than you might first imagine, and it sounds like it too. Its ZF six-speed sequential manual transmission uses carbon fiber paddles mounted just behind the steering wheel rather than a traditional stick. It has a clutch pedal used for launching in first gear, but after that, shifts are clutchless. The ECU cuts spark to the engine so that each shift comes with a sharp, double-pop from the raspy exhaust as the car flies by. From inside, most of the noise is gear whine from the transmission with a muffled clunk signifying a gear change.

With Earwood at the helm, the Abarth 124 Rally dissected the Streets of Willow course, perpetually on the limit and eager to change direction. The short gearing kept the engine in boost so that it was always pulling hard and seemed perfect for this tight track. Speaking of tight—the air compressor and tank used to help the transmission shift are mounted in the passenger footwell, shrinking the passenger space even further. I’m a big guy, so this wasn’t easy or comfortable, but it was worth the shoehorning and cramped situation; this car is a rocket.

Abarth brought to Skip Barner the same two cars that it campaigned in tarmac rallies and hill climbs with driver Kevin Wesley in 2017. When we told Wesley we rode in the Abarth 124, he asked if it was the one with the dent in the quarter panel, as that was the one he used at the Mount Washington Hill Climb in 2017.

In rally configuration, it’s geared for a top speed of about 120 mph, meaning that shifts come quickly. But Wesley noted that the sequential gearbox was easy to manage and made a good match for the nimble rally car. The suspension is also highly adjustable, making it well-suited to the varying conditions of different rally stages.

Wesley was particularly impressed with the engineering and build quality. “They’re indestructible. I went off at 60 mph and put it into a bunch of rocks and trees.” Ah, so that’s where the dent came from. According to Wesley, that off-course mishap damaged a wheel, but the car’s sturdiness meant it wasn’t a fatal wound (he went on to pilot it to the class win and a class record at Mount Washington). Wesley had nothing but good things to say about the car, and from our brief time in the passenger seat, we can appreciate why. If there were more tarmac racing in the U.S., the Abarth 124 Rally is primed and ready. 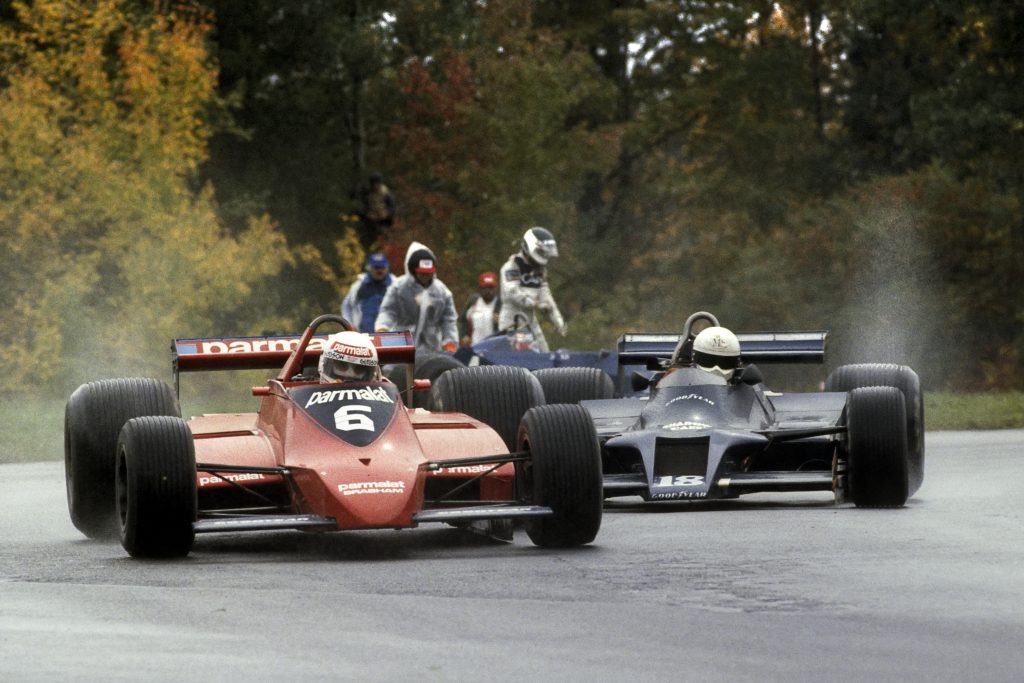 Motorsports The Force is still with(in) him, even at the age of 71
Steven Cole Smith