Smart battery chargers are marvels of convenience most of the time. They’re a one-button solution for many dead batteries, managing to use different charging routines on the fly to match the array of battery chemistries used on the market while also safely bringing a defibrillator-jolt of an initial charge down to a just a trickle as the battery comes back to life, keeping it topped off for you without any concern of overcharging. The problem, however, is that they’re designed around the 95-percent of cases where a battery has been abused for only a short amount of time, maybe resting around half its original voltage from sitting overnight with the dome light on or some other relatively minor mistake. But what if you pull your project out after a winter’s nap or start to try reviving that barn-find you just bought only to find that it’s sitting at a voltage that you can count on one hand?

Many smart chargers will refuse to activate on deeply-discharged lead-acid batteries, fearing that either a depleted lithium battery is connected (which becomes unstable if under- or over-charged, and can easily burst or catch fire) or that the inner lead plates of the lead-acid battery have welded themselves together after sulfation has taken over. While you’ll often find that the battery is as dead as Zed and will need to be replaced, there’s an off-chance that the sulfate layer on the battery’s lead plates can be removed with a long recharge. If your “smart” charger doesn’t already have a desulfate mode, which bypasses some of these safety measures and charges the battery in waves to attempt to break-off and dissolve the lead-sulfur crust that have built up on the battery’s plates, you can use a helper battery to trick the charger into activating and providing its full juice — which will hopefully start the desulfation process inside the battery. 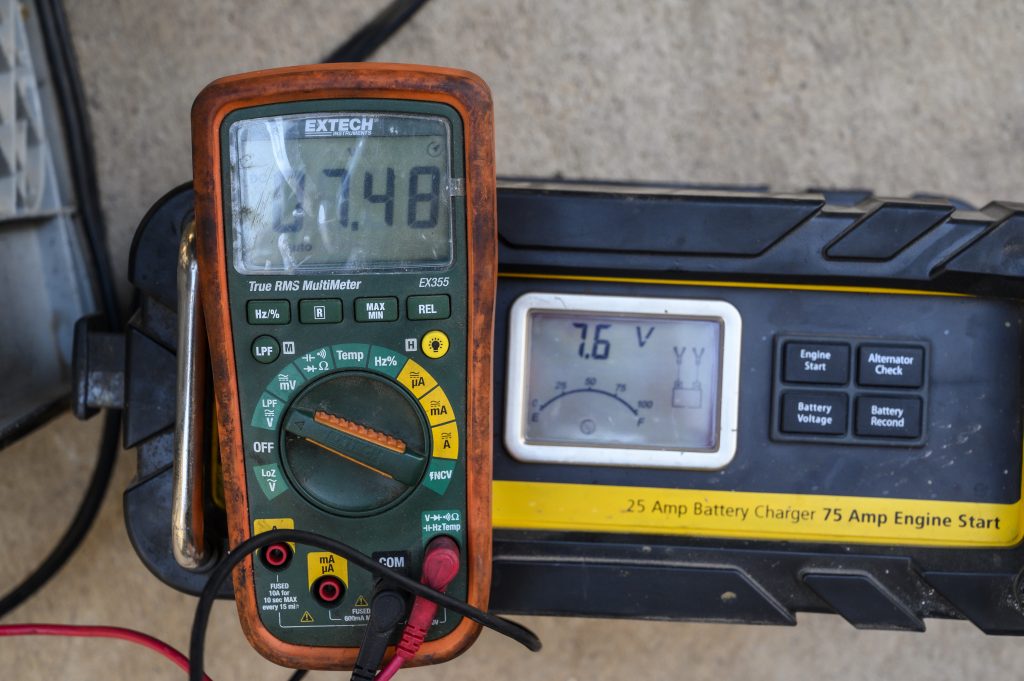 Use caution when working around dead batteries. It’s suggested that you have protective eyewear and it is an absolute requirement that this is done in a well-ventilated area, preferably outdoors. Lead-acid batteries give off a toxic and combustible hydrogen-sulfide gas when they are heavily damaged, so precautions must be taken to prevent the possibility of the battery bursting. If the battery appears to be swollen or has an acrid/rotten egg smell, remove all power immediately and properly dispose of that battery after resting for at least 12 hours.

Essentially, we’re just using jumper cables to ‘jump start’ the dead battery’s voltage high enough for the smart charger to recognize it as a salvageable battery. First, connect the charger’s clamps to the terminals. 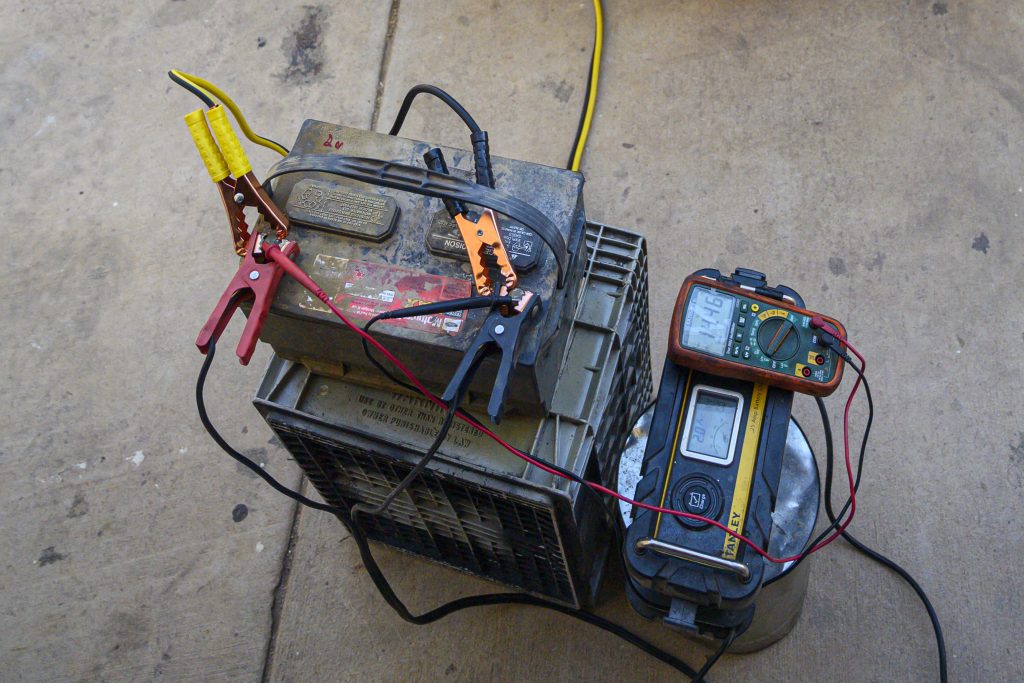 At the dead battery, we’re placing the jumper cables as-if we were jump-starting it in another car. You’ll have to be a little creative to get both pairs of clamps onto the terminals, and if you’re working with a side-post battery, a 3/8-16 bolt can be used as a makeshift terminal too.

With your jumper cables, connect the dead battery first — positive to positive, negative to negative. Now bring your cables to the good donor battery, and connect it — again, positive to positive and negative to negative, so both batteries are in parallel — hooking to the good battery last will keep you further away from the dead battery should there be any problems, and any sparks created by connecting the jumper cables happen at the good battery, reducing the risk of any off-gassed hydrogen-sulfide igniting.

Though it is preferable to use a spare battery for this job, it’s fine if you have to use one that’s already installed in another vehicle. With the donor battery (in the Suburban) connected, the smart charger detects both batteries as the same, tricking its internal programming into activating the charge routine. 14.46 volts confirms that the dead battery is being fed fresh electrons by the charger.

A multimeter helps to confirm if the dead battery is seeing enough line voltage to trick the smart charger. The twin batteries under the hood of my Suburban had little difficulty in doing this, so the smart charger was able to immediately activate, but it may require more than a half-hour or so if using a single, smaller donor battery. Once the dead battery starts to take a charge, you can completely remove the donor battery — if the smart charger continues chugging along, there’s a good chance that your dead battery can be brought back from the grave, so give it at least 24 hours to take a charge and dissolve the lead-sulfur deposits off the battery plates.

If you’ve given this setup more than 12 hours and the smart charger still refuses to take up the task, then in all likelihood the battery is truly ready for the grave—time to pay the parts store piper.