Stuff 415-hp hybrid guts into a Volvo PV544? Leave it to the Girl Gang

Volvo has cultivated a well-earned reputation for safety and understated design over the past six decades. Now and again, though, the normally staid Swedes have been known to have a little bit of fun. Remember the turbo “R” models? The six-cylinder Polestars? How about the bizarro TWR Volvo 850 wagon that competed in the British Touring Car Championship?

These cars notwithstanding, we don’t normally see Volvo’s name among the wild builds that light up the SEMA show each year in Las Vegas. That’s about to change. Volvo Cars USA has teamed up with Sarah “Bogi” Lateiner’s of Girl Gang Garage and BASF to build a wide-body Volvo called the “Iron Maven.”

This is an ambitious project, far more complex than simply dropping an LS crate motor into a boxy 240 sedan or a swoopy P1800 coupe. Instead, try wrapping your head around a 1961 Volvo PV544 stuffed with the guts of a 2019 Volvo S60 T8 Recharge Polestar Engineered. (Go ahead, take a breath after reading that name.) The package includes the S60’s supercharged and turbocharged four-cylinder engine, plug-in hybrid system, vehicle control systems, interior luxury, adjustable suspension, infotainment—all of it.

The finished build will be unveiled at SEMA in November.

Some will recognize Bogi as the co-host of Motor Trend’s All Girls Garage TV show. Like Girl Gang Garage’s earlier builds, the Iron Maven is an all-female endeavor, with a total of 150 girls and women participating at different times to work on various elements of the build.

These two Volvos seem lightyears apart on the evolutionary scale. While a pure battery-powered EV, meaning no internal combustion engine, would represent greater evolutionary distance between the S60 and the PV544, Bogi and Volvo thought an EV conversion would be too easy. (At least for this particular project’s purpose, which we’ll get to in a moment.) They got what they wanted; the S60 T8 Recharge Polestar Engineered intricate hardware must all be located in specific sections, which is a challenge in a 1960s Volvo that’s much smaller than the donor car. Let’s start there.

Unlike many modern hybrids, however, there’s no electric motor inside or connected to the transmission. Instead, all-wheel drive comes courtesy of dual rear-mounted electric motors that generate another 87 horsepower for the rear wheels, giving a combined output of 415 hp and 494 lb-ft of torque. In between the two powertrains, installed beneath the luxurious cocoon of modernist Swedish luxury, sits an 11.6-kilowatt-hour battery pack that weighs over 400 pounds. This setup means no driveshaft to the rear wheels. Running as a hybrid, this model was rated at 72 MPGe and could drive up to 22 miles on battery alone. Volvo claimed 0-60 in 4.3 seconds for the 4500-pound sedan.

The S60 T8 Polestar Engineered comes with a brake-by-wire system, all the multimedia connectivity you would want, manually adjustable Öhlins suspension, and extra-luxurious Contour power-adjustable front seats. The Girl Gang Garage is putting all of that into the simple-as-a-hammer Volvo 544 not just for kicks, but because they’re on a mission.

Girls just wanna have fun … and wrench on cars

Volvo teamed up with Girl Gang Garage for a common cause. Both share the goal of increasing the number of women working in the auto industry, particularly in dealer service departments. It seems that, while many female car nuts aspire to work in the automotive arena and have the skills to do so, dealerships historically have not rolled out the welcome mats for them. What’s more, sexist attitudes among some male employees often causes friction.

Women currently make up fewer than 10 percent of automotive repair maintenance employees, according to the U.S. Bureau of Labor Statistics. At the same time, we seem to hear a lot about how dealers can’t find enough qualified techs. Volvo has been listening.

Volvo spokesman Russell Datz tells Hagerty, “It’s difficult to get technicians now, so to overlook this talent pool is foolish and short-sighted. We asked how we could persuade retailers and independent shops that they need to be looking at women as their future labor force.”

Volvo, he explained, has been doing so via accelerated training programs for current techs, recent graduates, and military vets, along with scholarships and partnerships at its training centers across the U.S.

Bogi approached the problem from a different angle.

“I want to show that there are women in the trades kicking butt, and there’s a lot more who want in,” she says. “Doing crazy builds like this Volvo is about drawing attention, so we get to have those conversations. We want to reach as many women as we can.”

A factory-trained BMW technician, Bogi ran her own specialist repair shop in Phoenix, Arizona, for more than 10 years. Having experienced the bad that women can encounter working in auto dealerships, she became an advocate for change. Among other things, she established the Girl Gang Garage as a place to encourage girls and women to pursue careers in the male-dominated automotive industry.

“I wanted to create a safe space where I could give women in the trades the opportunity to meet each other, to be validated, to build their confidence and push their skills further.”

Confidence and skill were just the tips of the proverbial iceberg for what was needed to bridge the very different worlds, mechanically speaking, of this project. It takes a big helping of chutzpa to throw your lot in with such a complicated build.

Although primitive by any modern standards, the Volvo PV544 was a sturdy performer in its day. A minor evolution over Volvo’s first postwar car, the PV444, the 544 arrived in 1958 and continued in production alongside the more modern 122 model until 1965.

As a contrast to the Volkswagen Beetle, Volvo promoted the 544 as “the family sports car.” Advertising touted its 85-horsepower four-cylinder engine, 95-mph top speed, rally- winning pedigree and a claimed 35-mpg fuel economy. Volvo’s American branch had also become known for its humorous advertising, which cheekily poked a little fun at the 544’s resemblance to 1940s Fords. As it turned out, the style was perfect for a hot rod build.

“The ’61 came to us as a shell with a bunch of parts piled inside of it,” Bogi explains. “It had been sitting in a field in Arizona. Overall, the car was in solid structural condition. It didn’t have much rust, just a patina with old gross paint.”

The 2019 S60 donor vehicle is a former Volvo tech-training car.

“This is taking two unibody vehicles, from two different eras, and joining them together,” says Bogi. “The big challenge was making the two cars fit one another, structurally. The S60 is much wider and longer.”

A glance at the stats shows the disparity:

The project began with some heavy-duty metal surgery.

“There’s no instruction manual for this,” jokes Bogi. “It was figuring out where to separate these two vehicles from their own components and then put them together. We just started cutting. We cut the S60’s roof off, then we cut the sides off and kept trimming the floor until we could somewhat see the outline of the 544.”

And they kept on cutting.

“We had to shorten the S60 floor. We cut it in half laterally and took out 16 inches, then welded that together. We took the floor out of the 544 and put that on top of the S60 for fit. That’s been the game throughout this whole thing. If something doesn’t, we see how much we could structurally get away with removing.”

When it all did finally fit together, the Girl Gang welded the 544 body onto the modern car’s floor and then also widened its fenders by 5.5 inches.

“She’s a very curvy girl,” says Bogi. “We’ve reduced, reused, and recycled during this process. About 80 percent of the metal that we’ve used is all original 1961 Volvo metal. We’ve only had to use one aftermarket part so far. Everything else is from the Volvos or handmade.”

The mission calls for using as much of the 2019 Volvo plug-in hybrid as can be transferred into the 544 shell.

“Everything has been heavily modified,” Bogi explains. “We’re using the S60 dash, but we had to cut it to make it smaller. We’re using the S60 seats, but they had to be cut in half and narrowed by two inches. That was a feat by itself.”

As of August, the car was ready for primer from the firewall back, with more work to be done on the front.

Among the 150 girls and women who will ultimately have a hand in the Iron Maven’s creation are some current Volvo dealership techs. Others range from newbies and hobbyists to mechanical and electrical engineers and chemists and stay-at-home moms.

“Their reasons for participating are as diverse as their backgrounds,” Bogi says. “We generally work with groups of 2-3 or 7-8 women at once. Some from out of town will stay for a long weekend or a week, some up to a month. A lot of the locals will come in several times per month to lend a hand when they can.”

The challenge, she explains, is harnessing a constantly changing crew’s talents and sheer desire to work.

“Every day is different and has different challenges—figuring out on the fly who’s going to be good at what, and where I can teach somebody the most,” she says. “I might be dealing with pros with 5–20 years of experience one day, and the next day I could be teaching somebody how to use a ratchet. I like to put women on things that they’re afraid of, to push their skills and build their confidence and courage. Somehow, magic happens and it works.”

The “magic” is fueled by camaraderie and common cause.

“This is not my build, it’s our build,” she says. “There’s a lot of collaboration. When we encounter a problem, we gather around and figure out how we can solve it. As examples, the shape of the fenders is handled by five different women. We had a mechanical engineer and her 14-year-old daughter who wants to be an engineer help design the front suspension.”

Boots on the ground 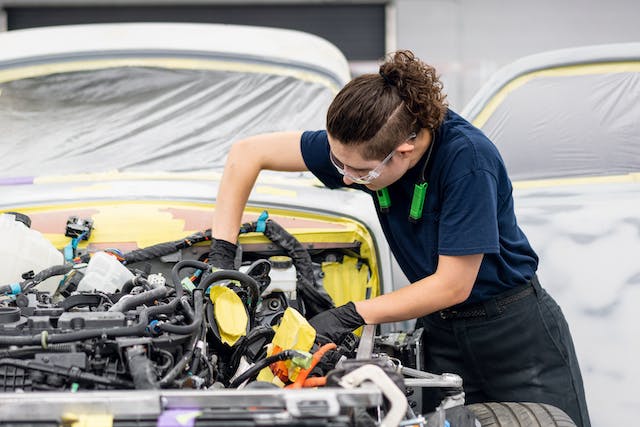 Porsha Conrad, a 19-year-old tech at Bob Penkhus Volvo in Colorado Springs, shared her experience of working on the Iron Maven.

“I routed the brake lines,” she explained. “I struggled figuring out how they were routed under the car, but with Bogi’s help, we figured it out.” The experience of both working on the build and observing others, she added, provided deeper insight into the engineering and technology of the modern Volvo plug-in hybrid.

Conrad offered straightforward advice for other women in the automotive trades, or planning to get in: “Don’t give up. You may always face sexism and adversity in the workplace, so stand up for yourself. I feel empowered when I take apart a car or reassemble an engine.”

Volvo set up a Snapchat group for female dealer techs as a support network. “It’s very active,” she says.

The color of change

The Iron Maven will make its SEMA debut in the BASF booth. In the meantime, the public can vote to select its paint color from among three custom hues developed with BASF. After SEMA, the Iron Maven will likely make other appearances, but no firm plans have been announced. Wherever the car goes, though, the message will be the same.

“We want to prove to ourselves as women in the trades that we’re capable and we can do anything we set our minds to,” says Bogi.

And they want to make sure the auto industry takes notice.

Get an insurance quote
A Story About
Share Leave comment
Read next Up next: Porsche 912: Poor man’s 911 or something more?