The O.G. Corral: A vintage Bronco shop gallops into the future

Before walking up the ramp inside an unmarked building to say hello to Agaso Outdoor owners Lisa Cady and August Paro, visitors must first go through Luca. The compact 10-year-old brindle dachshund mix lords over this domain. Once you pass his sniff test, you’re welcomed in. He trots you past a row of vehicles in various states of completion to Cady, who sports a blue bandanna around her neck just like Luca’s.

The shop’s name, Agaso, means “jockey” in Latin, and it might not make sense until you learn that Cady and Paro specialize in restoring and modifying first-generation Ford Broncos. The 5000 square feet that Agaso occupies in the industrial Los Angeles suburb of Gardena is already cramped, a testament to the vintage off-roader boom ripping through the surviving stock of the roughly 225,000 first-generation Broncos produced from 1965 through 1977.

The current shop space stretches long enough to accommodate five cars and one lift. Natural light floods through the skylights aided by the artificial fluorescent glow. A solitary navy blue Agaso Outdoor logo graces a pristine white wall while Johnny Cash’s “One Piece at a Time” echoes through the space, with its New York loft-chic vibe. Cady and Paro have been business partners since 2012, and during our visit, three of their eight full- and part-time employees work on a piano-black Bronco tub that returned from paint just that morning—and over three weeks late.

“We plan on expanding. We want to do our own metalwork and paint in the new location we’re on the hunt for,” Cady says out of the gate. When they outsource work to vendors, they have no control over how long that work takes. Looking around, control seems of paramount importance here.

From the orderly rows of motor oil and hydraulic fluid to the color-coded electrical-tape rack, everything has a place. Even the jack stands have a stand. A complete stranger could come in and easily get to work, that’s how meticulously the shop is organized. “If one person puts it back, then someone else knows where it is,” says Cady. She joked that when she was setting up the shop, she wore her Brother P-touch label maker around in a tool belt.

Cady doesn’t come from a car background. She never restored cars with an uncle or her dad. At 19, she moved from Northern California to New York to attend the Parsons School of Design to study architecture and interior design. She admired cars as a spectator and, like Paro, has loved Jeeps and off-road vehicles since high school.

After 10 years in New York, and looking for something else to do, she moved to Michigan and started renovating the interiors of vintage homes. Shortly after, Cady bought a ’69 Bronco and, piece by piece, started restoring it herself. She sees a lot of connection between architecture and car restoration. “They’re both technical and mechanical, but they’re also creative and beautiful,” she says.

Cady’s partner is a product of the 1980s. In those days, Paro and his buddies would drive their trucks to Ocean City, Maryland, and he once bought a fishing license just so he could run his rescued ’76 Bronco on the beach. He restored the truck himself, learning as he went, but not without help from a friend who was a painter at a local Mercedes-Benz dealer. Paro traded him a new air compressor for his time.

Cady and Paro met through mutual friends after both moved to Southern California. Coincidentally, Paro’s day job before Agaso became a full-time endeavor was designing and building restaurants. Lucky for them, Cady and Paro have similar design aesthetics and approaches to problem-solving.

Paro discovered early on that there’s a protocol with restoring a Bronco. “If you don’t follow the process in the proper order, you run into problems. The big issue with Broncos is space. Those are tight spots for modern parts to fit in there and work together. From the transmission to the dipstick, we want to make sure the puzzle fits while upgrading it to modern spec.”

The original Bronco’s optional 302 small-block V-8 already made for a tight squeeze. Agaso’s reimagined handiwork gets the electronically fuel-injected 5.0 V-8 that Ford produced from 1981 through 2001 and which supplanted the original 302.

At Agaso, they’re not looking to make monster-powered trucks stuffed with the overhead-cam Coyote, but rather to preserve the original Bronco driving experience as much as possible. They see themselves as continuing where Ford left off in 1977. “From a builder’s perspective, knowing you did everything you could to make it usable as it was intended, from re-engineering Ford parts to developing our own systems, feels very gratifying,” says Paro.

They’re not afraid to share their knowledge, either. Well, some of it, at least. They’ve crafted a new exhaust system, the architecture of which addresses that limited underhood space issue, and they plan on selling it to other restoration shops. They’ve fabricated aluminum wheels that look like the original steelies but can accommodate bigger brakes. A new transmission cooling system is in the works.

They’re also developing their own aluminum small-block with a builder who once worked with Carroll Shelby when he was still in Los Angeles, an engine with just enough horsepower and a flat torque curve that will work the low end of the range—exactly what a Bronco needs as a purpose-built off-road machine.

They say they have seen more than their share of bad restoration jobs. Like those tattoo artists who fix bad ink, they’ve redone botched Broncs. “To a guy who knows Mustangs, they look easy to build, but having a driver’s license doesn’t make you a good driver,” says Paro.

“We can’t sell a disappointment,” Cady adds, which is why they say they’re not interested in volume. Neither of them says they could sleep at night trying to crank out machines to compromised standards. Interiors remain a labor of love for Cady. She finds creative finishes and fabrics that suit her clients’ needs. “Marine-grade vinyl looks great, wears well, and is waterproof, but I’ll use leather if someone requests it,” she says. Crisp apple-green English wool tweed and a Porsche houndstooth cloth swathe the rebuilt seats in two almost-finished examples in the shop. Modern technologies, including an Alpine audio and navigation system hidden in the center console, add functionality and convenience, but the finished aesthetic is perfectly period-correct.

There’s a lot of conversation when they first meet their prospective clients. “We’ve talked more people out of buying a Bronco than into it,” Cady says. Her and Paro’s future ambitions are as considered as their labeled hardware drawers. Secreted in a nook of the shop sits a Porsche 912 for which they’re developing an EV platform. Part of their expansion includes the electrification of classic vehicles other than Broncos.

“In our next shop, we’ll have a kitchen, too,” says Cady as she swoops her panting puppy dog into her arms. “Luca loves all kinds of cuisine.” The petite shop boss settles comfortably in his spot. He’ll soon be getting his very own set of blue Agaso coveralls, just like the rest of the crew. 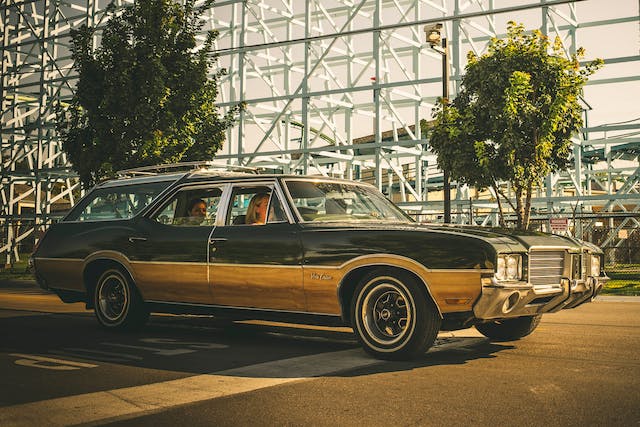