“Give me Goodwood on a summer’s day, and you can keep the rest,” said the late, great Roy Salvadori. Well, summer made its last appearance at the Goodwood Revival and we couldn’t agree more wholeheartedly. It was an epic weekend of historic racing with a field of 30 Minis piloted by Le Mans and Formula 1 racers trading paint, Ford boss Jim Farley hustling his GT40, D-Types, Cobras, and priceless Bentleys, Ferraris, and Maseratis tearing round the track like there’s no tomorrow. (Catch some highlights on the Goodwood YouTube channel.)

However, as always it was the public parking lots that offered even more excitement. Where else in the world do people simply abandon pre-war Alfa Romeos, Blue Train Bentleys, and Ferrari GTOs in a field?

Here are ten of our favorite finds.

What’s this? Only a 1933 Alfa Romeo 8C 2300 Touring Spider, casually left without so much as a tonneau cover to protect it, despite being worth squillions.

Props to the owners of this lovely little 914 who’d driven it over from Belgium. Later I met a group of Belgians who’d been coming to The Revival every year for nine years. Unsurprisingly, they were in line for frites.

Oof. The Seventies really were special, weren’t they? With a front-engine V-12, twin fuel tanks, and a greenhouse big enough to run a mobile hothouse, the Espada is a stunner.

Another beauty left open to the elements was this DS 21 Décoptable by Chapron. RM Sotheby’s recently sold a similar car from the Elkhart Collection for $246,000.

Only 19 Aston Martin DB4 Zagatos were built (discounting Aston’s continuation models of course) and this is one of them. So that’s potentially $11 million sitting there next to a 1940 Alvis and replica SS100. Casual.

You wait ages for a train and then two come along at once. In this case they’re Blue Train Bentleys as famously driven by Bentley Boy Woolf Barnato when he raced the Train Bleu from the south of France to London in 1930. The original Blue Train was thought to be a Speed Six coupe bodied by Gurney Nutting (or maybe Mulliner) and these two are loving recreations. Car culture is alive and well, even for pre-war machines. 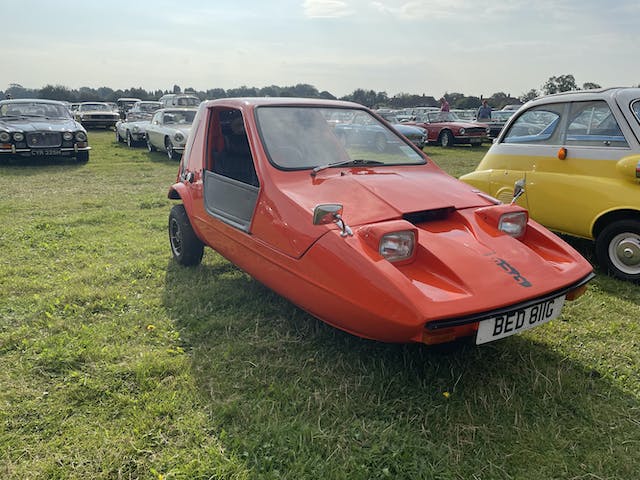 The award for the the bravest driver at Goodwood surely has to go to whoever risked life and limb to get there in in this 1973 Bond Bug. They’re probably still driving home—the little trike has just a 750-cc motor.

Goodwood wouldn’t be Goodwood without a 300 SL, now would it? This 1955 example looked exceptional in black and would cost around $1M–$1.5M if you wanted something similar. No valet or attendant in sight.

This 288 GTO belongs to British supercar and classic dealer Tom Hartley. Tom says he drove the car three hours to Goodwood and it never missed a beat. Then he just walked away from the $3M machine in the public field and went about his day. Good man.

Amazingly, mine was the only Esprit I spied (perhaps all the others broke down on the way?) and so even I got “papped.”