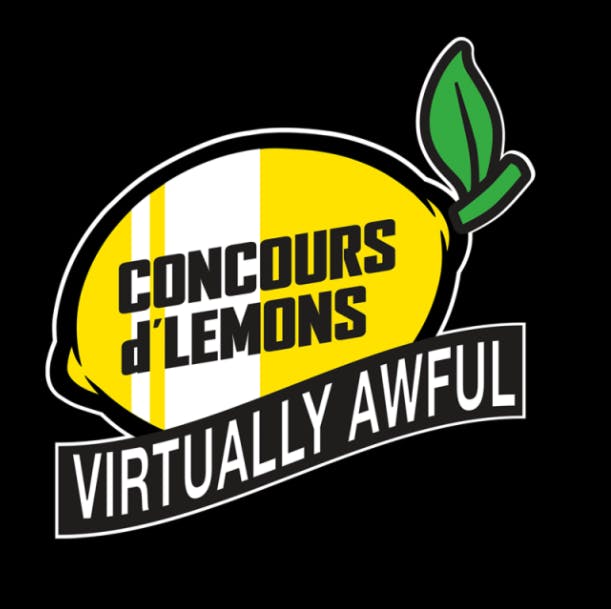 There’s no doubt that every participant is a winner at a Concours d’Lemons event, as this concours celebrates the worst in antique, classic, fully depreciated, and generally hooptified automobiles.  Yet like nearly every other automotive event during the pandemic, Concours d’Lemons was forced to go “virtual” and chose the Hagerty Community as its groundskeeper. Feel free to peruse the vehicles at your leisure!

Don’t want to “walk” the show floor yourself?  You can watch the awards ceremony here or, without any further ado, read about them here:

Somewhere under the shoe-shaped sheetmetal lies a full-size Lincoln Continental, but it’s actually a train theme at work here. Called the “Bullet Drain” there’s little reason to doubt this was the worst entry the concours from the Dearborn side of things.

Purchased for $450 as a normal Saturn SL family sedan, the rolling Tiki “car” now serves (non-alcoholic) beverages to thirsty onlookers. Let’s hope the cups are just as plasticky as the Saturn’s flanks!

Sure it looks awesome in a Hurst Oldsmobile-esque livery, but purists need not worry: this Avanti was a basket case when the owner purchased it. And after extensive work and racing in a 24 Hours or Lemons event? It now has a racing pedigree, which clearly bowled over the judges!

The 1981 Jet Electra was one of that era’s misguided forays into automobile electrification. Using the 1981 Plymouth Horizon TC3 as a foundation, this Jet Electra moved to bigger and better things as a Lemons Race Car.  I can personally attest to the monumental levels of butt-terrible present in this fine machine, witnessing it’s depressingly slow performance at Carolina Motorsports Park. Clearly this 007 Electra gives new meaning to the old phrase, MOPAR or NO Car!

Looking like a reject from a Ken Block YouTube video casting call, this Infiniti Q45 V-8 swapped Nissan 300ZX has the requisite power to go with the aluminum wheel arch extensions and other body modifications.  But the heckblenden between the taillights is probably what won the judges over.

German engineering doesn’t get any more precise with the name Isabella attached to it, but this deliciously awful relic from West Germany had the stones to race in the 24 Hours of Lemons: No doubt being a delightful rolling road block for every other German car on track. What’s not to love?

The Saab 96 is a fantastic Concours D’Lemons entry in any condition, it’s almost cheating without needing to bribe the judges.  That V-4 engine and quirky Saab design language was something special, even before this one was rescued from an extended slumber under a tree.

Nothing to see here, it’s just a Citroen 2CV with a custom fiberglass Citroën Traction Avant front clip and a station wagon rear. The owner claims it’s a “1 of 2” conversion from a Switzerland-based company. But seriously, this shooting brake is anything but mundane and common place, it has Concours d’Lemons victory written all over it.

Can you believe this Reliant 3-wheeler survived a Lemons Rally without falling on its side, scraping those elegant body panels?  Perhaps it’s because this imported, right-hand-drive Reliant is the older, classier version of the Reliant Robin: that classic roofline clearly wowed the judges!

Back in 2009, this Wartburg was the prize for winning the 24 Hours of Lemons essay contest.  The current owner turned a pile of parts into a gasser style hot rod, making it a natural choice for concours judges.

How could the descendent of a Chrysler K car win the Italian class?  Perhaps the influence isn’t obvious, but the removable porthole roof, Maserati badging and the decadence of its loosely folded leather interior is indeed alluring.

More commonly known as the Datsun Cedric, this Australian-spec 260C was used as a farm vehicle for most of its life, before it wound up left to rot in a barn. But the Datsun was a patient little wagon, biding its time before the judges rated it the best from the Land Down Under.

Originally built as as an autocross terror, then built to spec as a 24 Hours of Lemons racer, this Hyundai Elantra lived a far more interesting life than most of its ilk.  And now that it’s won in the Concours d’Lemons?  Why, it’s an instant classic!

Made from three different cars and painted 128 colors, this brilliant machine didn’t need Edsel name recognition to win, but it certainly didn’t hurt!

The Indian Premier Padmini was based on the Fiat 1200, and this rebadged Fiat sports the Padmini’s signature yellow and black taxi livery that once roamed the mean streets of Mumbai en masse.  This example also sports a less-ancient 1970s Datsun powertrain, successfully completed a Lemons Rally, and clearly won the hearts of all who came in its path.

This Australian spec Isuzu pickup was given to the current owner for the asking price of free. This former farm truck sports all the necessary patina, is home to a variety of stinging insects, and currently is used to store a metal rolling door in its smart-sized bed.  A clear winner!

This Checker Cab sports Chevy’s durable 250-cubic-inch straight-six engine and has an impressive 330,000 miles on its odometer. The owner claims the green paint job was performed at the behest of Coca-Cola in promotion of its Surge soda brand. With such a legacy of service and all that marketing prowess, this Checker simply had to win!

This Yugo met its current owner with 90,000 miles and is shockingly reliable with only regular maintenance to its credit. While completing two Lemons Rallies proves the point, the GVX specific ground effects package almost certainly swayed the judges, too.

Under this work of artistic magnificence lies the bread and butter of Eastern European automotive engineering: the Trabant sported a rudimentary two-cycle engine, and a resin plastic (nee Duraplast) body that is clearly a fantastic canvas for rolling art.

This Dart is currently being restored by it’s owner as a labor of love: This was his great-grandparents’ car and his mode of transport during his formative years.  Sedans are generally a poor candidate for an extensive restoration, but the sentimental heart knows no such boundaries. So do Concours d’Lemons judges too, apparently.

Dick Teague’s career in automobile design is both impressive and worthy of obsession, not unlike the feelings the judges experienced when gazing over the wonderfully brown flanks of this AMC Pacer wagon.

Talk about provenance! This Ford Econoline was originally a fleet vehicle for the state of California, then becoming the loyal transport vehicle for accomplished Car and Driver journalist Tony Swan. After Tony’s passing, his wife Mary Seelhorst and friend Michael Newberry carried this “utility yellow” torch for future motorsport enthusiasts to enjoy: while the Michigan Concours d’Lemons was cancelled, it’s clear the powers that be would have given this yellow van the gold medal.

What is presented before you is a three-wheeler created using parts from two Honda Goldwing motorcycles, a Mazda Miata, and an Oliver 66 tractor. Yes, it’s both running and driving, much to the delight of onlookers in the state of Nebraska.  This trike has it all, and the now the world will know of its Lemons glory!