To quote an old friend on the Friday before Mother’s Day: “If you haven’t booked brunch by now, you’re probably too late. First you didn’t go to medical school, and now this.”

If you’re going to Monterey for the week of auctions, concours d’elegance and historic racing, from August 15-21, you’re in the same situation. Time is running out. But with guile and a little planning, you can still pull it off.

This year BMW celebrates its centenary (an arbitrary choice, as it was busy making aircraft engines in 1916) but you’ll see everything from pre-war 328 roadsters, 1950s baroque angels and the celebrated Neue Klasse, whose derivatives have powered the company to the top of the automotive world between 1961 and now.

Best plan is to fly in to San Jose and rent a car. San Francisco is known for fog and delays and Los Angeles is about a five hour drive away. San Jose is only about 60 miles north of Monterey on Highway 1 and coming from the north is your best bet. Arrive a day or so early, while you can still get around easily and go see the Pre-Reunion Races at Mazda Laguna Seca Raceway free, before the crowds get there for next weekend’s reunion. It’s difficult to fly directly to Monterey from some locations, so check your connections before you try that. But you’re going to need a car anyway, so San Jose is a much better idea. You can sightsee around Big Sur, and discover some excellent vineyards.

You’re very late to find local reservations, so look farther away. There are a number of small towns within 20 miles (Gilroy, Hollister, Watsonville and Salinas) and access from inland is somewhat easier. Make sure you know the route from your hotel to the things you want to see, and avoid Highway 1 (Carmel is particularly difficult at rush hour). If you’re renting a house, make sure you read on-line reports from previous tenants. It’s too late to fix things when you arrive and the place is a mess, or the neighbors are repairing cars on the front lawn.

Make restaurant reservations immediately, and check all the local guides for restaurant details. Good restaurants fill up early for dinner so plan to eat as late as possible, if you can’t get reservations. Unless you’re really flush, eat out early in your visit; on the big weekend you’re better off cooking at home, or with friends. As far as breakfast goes, be sure and eat it. It may have to last you a very long time.

Set off early and avoid Highway 1 and Highway 68 to Salinas, whenever possible. Buy a large-scale map and use your GPS to plan alternate routes (there are quite a few). If you’re going to Mazda Laguna Seca Raceway, or into Monterey from the north or from Salinas during rush hour, General Jim Moore is your friend. You don’t even know who he is, but his inland road through Ford Ord is a godsend.

Remember this is a bonus week for Monterey meter maids, who patrol late into the evening in some areas. Take no chances. Take care in other seaside cities too. Unpaid tickets will be added to your rental car VISA bill. You can run, but you can’t hide

Whether you are buying or selling or not, cruise the auctions in the days before they start. You’ll see everything and avoid the crowds. If you are buying, this is your chance to examine the cars very closely. And if you’re really lucky, the seller might be there. You can always go back for the circus when the action begins. Auction days are: Bonhams Aug. 19; Mecum Aug. 19-20; Russo & Steele Aug. 19-20; Rick Cole Aug. 19-20; RM Sotheby’s Aug. 19-20; Gooding & Co Aug. 20-21. Check auction company websites on-line for addresses and full catalogues.

This starts the week at the Embassy Suites in Del Rey Oaks. The very best books, signs, models, badges, posters and incredible reconstructions of vital rare parts – including castings. With any luck some vendors will be here from Europe, especially after the Brexit fiasco. Here’s where you can buy a 1924 cast-iron Michelin Bibendum tire pump (he blows through the hose) for $2,400 and spend the next five years (or years) explaining it to your wife. $20 admission. 10 a.m. to 6 p.m. www.automobiliamonterey.com

Kick off Monterey car week along with Hagerty and Classic Motorsports magazine’s staff. Drive your classic car and enjoy fine wines, great food and live music at this party, beginning at 3 p.m. It’s being held at the Folktale Winery located at 8940 Carmel Valley Road in Carmel, Calif. Admission is free thanks to support from Hagerty, Vredestein Tires, Reliable Carriers and On the Road Again Classics. www.classicmotorsports.com

TUESDAY August 16: CONCOURS ON THE AVENUE IN CARMEL

This is an independent show on Ocean Avenue from 10 a.m. to 5 p.m. It’s free to spectators, as are all shows in downtown Carmel (a legacy of Clint Eastwood’s mayoral term, perhaps). Expect about 175 cars along 18 blocks. Micro cars and muscle cars from 1940-73, Porsches from 1948-89 and Ferraris from 1947-89 all pay $250 to enter. Spend your money on excellent shopping and at plenty of wine bars and restaurants to sit down and talk. www.carmelconcours.com

Sponsored by Marina Motor Sports this free show offers an intriguing collection of about 100 weird little European and Japanese cars (and the odd Crosley) in the city’s wide, avenue-like Main Street called Lighthouse Avenue. Cars must be less than 1600cc (some are a LOT less) and donations are accepted to help the Library, the Youth Center and the Veterans Transition Center. An offbeat show, with chatty owners and friendly atmosphere, it runs from noon to 5 p.m. www.marinamotorsports.org

Gordon McCall’s party enables you to mingle with the nouveau riche, vintage sports cars, modern exotics, private planes and warbirds. If you just won the lottery, you might consider lashing out $395 for VIP admission or $550 for Red Carpet admission, but basic tickets were sold out months ago. Dress to kill and bluff your way through the crowd. “As I was telling Paul McCartney: Paul you’ve got to stop dropping names.” Passable French or Italian is appropriate. www.mccallevents.com

Save yourself $375 and (now THAT’S a tip) and see most of the major Pebble Beach Concours cars on the Coastal Tour free on Thursday, as they run down to Big Sur. It’s worth 10 points to the heavy duty contestants in final judging. Best to watch them leaving Carmel (usually about 2 p.m.) on your tailgate with a picnic lunch, as the crowds on Ocean Avenue are too dense for any photos, unless you are collecting rear views of folks in baggy shorts with dayglo Nikes, straw hats and Hawaiian shirts. You’ll get lots of those. www.pebblebeachconcours.net

FRIDAY August 19: LEGENDS OF THE AUTOBAHN

Friday’s showcase for some German cars is settled in at the Nicklaus Club-Monterey golf course, on Highway 68, west of Mazda Laguna Seca Raceway. Don’t go too early (have breakfast) many of the most interesting cars will be in the parking lot later in the morning. You’ll see around 400 old and new BMWs (remember, it’s their party this year), Mercedes-Benz and Audi models. Go between 9 a.m. to 1 p.m. Free. www.legendsoftheautobahn.org

Porschephiles got fed up with playing second fiddle to BMW at Legends of the Autobahn and started their own show three years ago. It’s at Rancho Canada on Carmel Valley road from 7 a.m.-4 p.m. Once again, have breakfast first, then go gaze at about 500 Porsches, from 1948-2016. There are bound to be some surprises. You think Porsche will let BMW steal all the glory? I thought not. Free. www.werksreunion.com

The annual Ferrari Roundup is back at Black Horse Golf Course in Seaside, off General Jim Moore Road. It’s a much bigger location, and more convenient than the disastrous experiment on Highway 68, and you won’t see as many Ferraris overheating in the traffic jams. Expect 800-1,000 Ferraris, Maseratis and other Italians. Numerous 50-year anniversaries will be celebrated, so flip through your Italian sports car books, and see what was launched in 1966. Buy tickets online: you wouldn’t believe the number of people trying to bluff their way in on the day with “Do You Know Who I Am? Tickets were left here in my name…” Tickets are $135, kids are free and the Highline Autos lunch is $45 (it IS a Ferrari event). The shows runs from 9 a.m. to 5 p.m. www.mazdaraceway.com

As we noted BMW celebrates its 100th anniversary this year and it’s the featured marque at the 2016 Reunion. There’s a Pre-Reunion teaser to this grand event Saturday and Sunday August 13-14, when admission to Laguna Seca Raceway is free, and about 325 classic racers compete. There’s even a show in downtown Monterey on Friday night, August 12, where racers drive their cars into town, escorted by the CHP.  Some drivers race both weekends for maximum track time; others because they have auction or concours business the Reunion weekend. The Reunion features 550 of the world’s best vintage racers in 15 classes and you’ll have a chance to hear and see cars you won’t find anywhere else. Buy tickets in advance and prepare to walk. Preferred parking is sold out Friday and Saturday and free parking can be a long way off. Wear comfortable shoes and a hat, carry water and sunscreen. Don’t miss the pit action, you can get close to famous cars and drivers; people are friendly and talkative. Pit Row Suites sold out; Flagroom packages range from $200-$375. Reserved camping sold out. Gates open at 7 a.m. Racing from 8 a.m.-5.30 p.m. Advance tickets $140 for 3 days, $160 at gate, 2 days  110 advance, $130 at gate. Friday ticket $50; Saturday $80; Sunday $60. Includes paddock. www.mazdaraceway.com

With 200 classics, concepts and historic sports cars on the rolling green sward by the bay, this is considered to be the best car show in the world by those who can’t get into the Villa d’Este event in Northern Italy. This year marks the 100th anniversary of BMW, so expect them to pull out all the stops. It’s also the 50th anniversary of Ford’s victory at Le Mans (and the less said about this year’s sandbagging the better). Chapron coachwork, the Lamborghini Miura, Delage and Delahaye are also being celebrated. However, expect 2016 access to be worse than ever (if possible), with extensive construction rerouting traffic even more confusingly than in 2015. Save yourself $325 in advance, ($375 at the gate) by getting up at 3 am for the Dawn Patrol (also get a cap and Hagerty donut). By 9 a.m. you won’t be able to take car pictures, even if you are 10 feet tall; there will be people in your way. If you must go later, park in Carmel and ride the shuttle. Officially, the show runs 10.30 a.m. to 5.30 p.m. with awards on the lawn in front of the clubhouse (you’ve seen the pictures). www.pebblebeachconcours.net 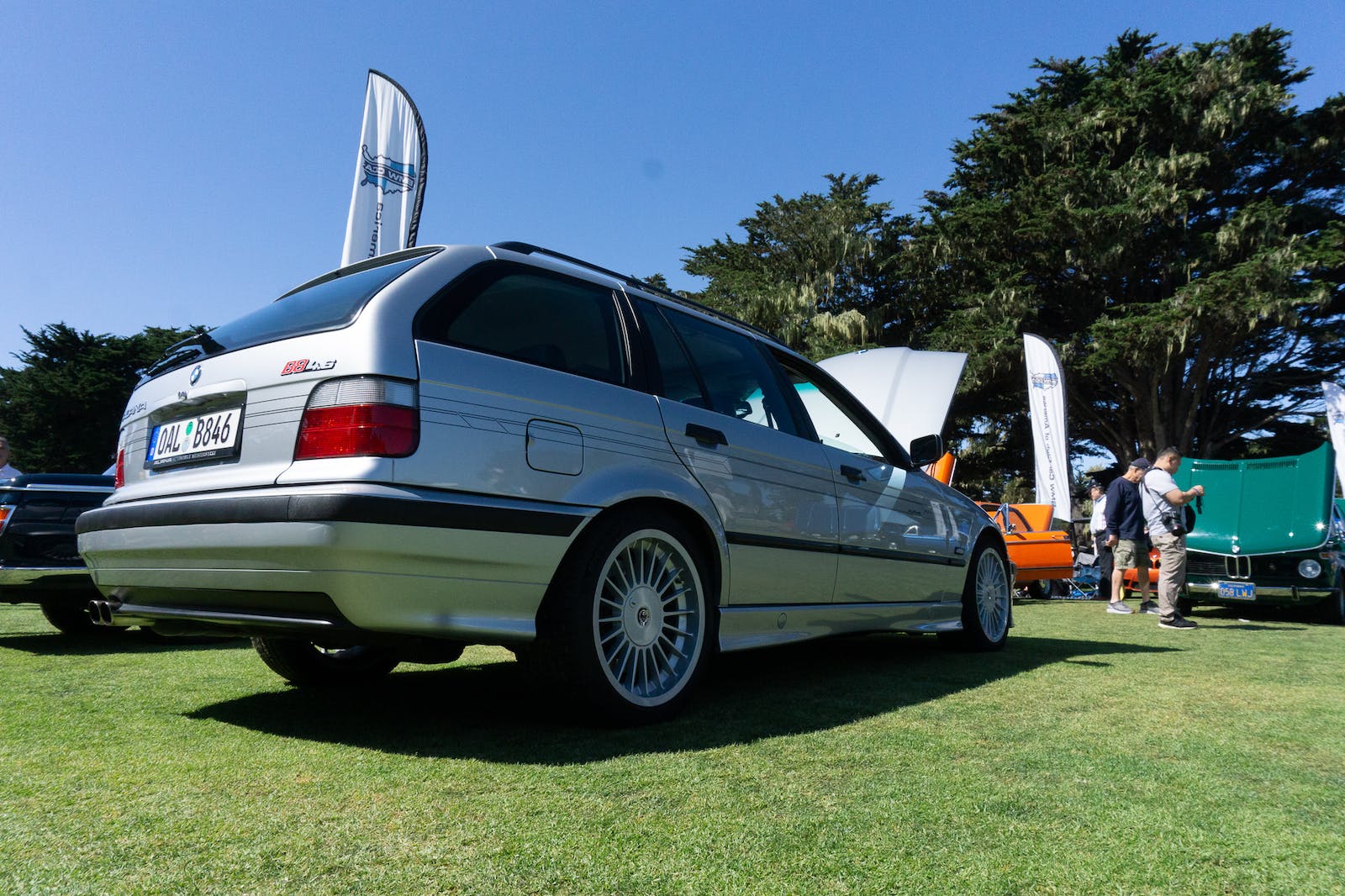