A lot of people say they want to save Route 66, but Mobil 1 is actually doing something about it. Starting August 25th, the motor oil brand rolled out its Keep Route 66 Kickin’ campaign. Included in the campaign are events planned along the route, a guide to Route 66’s small businesses, and advocating for drivers from all over to designate Route 66 as a National Historic Trail.

The campaign began at the traditional western endpoint of Route 66, Santa Monica Pier, with Mobil 1 unveiling its own giant Muffler Man for a series of stops along the Mother Road in September and October to raise awareness of and support the small businesses along the route that help make the highway such a memorable road-trip. 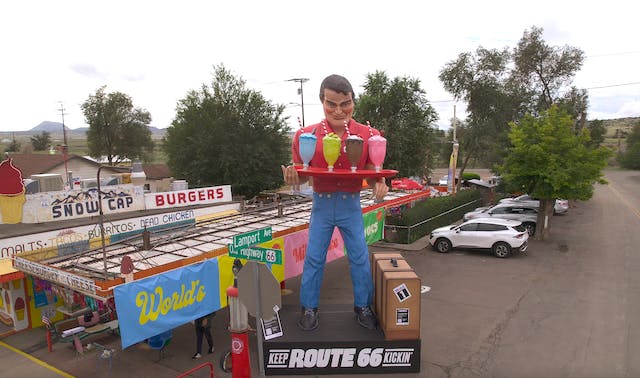 First up was a Guinness Book of World Record-setting event September 10th at Delgadillo’s Snow Cap Drive-In restaurant in Seligman, Arizona. When Pixar was creating their 2006 motion picture Cars, the director met with the Delgadillo family that owns the Snow Cap, who shared how traffic through the town virtually disappeared the day that nearby interstate 40 opened – a trend Mobil 1 hopes to help reverse. The goal at this road-trip stop was to beat the world record for the most milkshake flavors on display and served. In one hour, they made 266 milkshakes, crushing the old record of 205 with, well, unique flavors like ‘chicken nugget, bacon, chocolate’ or ‘Oreo, salsa, turkey, root beer’ shakes. 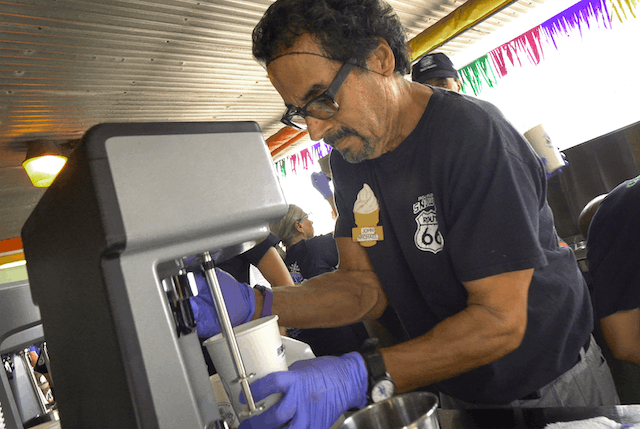 Bryce Huschka, Consumer Marketing and Growth Manager for ExxonMobil, was at the event and described it as being so much more than setting a world record. It was about the town and community supporting one another – with happy tears shed by many involved when presented with the Guinness World Record. After all, creating an event like this put a lot of attention on a small business like Snow Cap, which was the true goal of it all.

Huschka says, “At the event I met everyone from locals coming from their kid’s soccer game and people on a motorcycle tour through Route 66, to a couple that drove 1.5 hours to be there when they saw it on Facebook and groups of people from all over the world passing through on Route 66 tours.”

The owner of the shop next door to the Snow Cap, “Big Mike” shared, “The best thing you can do is to help more Americans understand how special Route 66 is. People internationally know it, but it feels like people in America have forgotten.”

Huschka told the Delgadillo family, “We never meant this to be a one-time thing where we march into town and march out. This is the start of a friendship. If the Delgadillo’s and the small businesses on Route 66 win, we all win.” 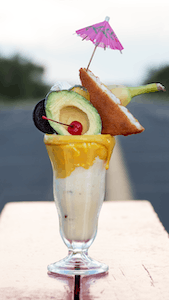 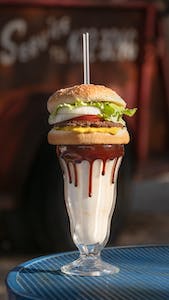 Milkshakes like these helped bring all the boys to the yard, as over 1,000 people attended the event.

John Delgadillo added “Recently, we’ve seen fewer visitors traveling down Route 66, even as it remains an icon of American and even global culture. The pandemic really intensified this for us, so we were excited to team up with Mobil 1 to promote this classic road trip experience.” 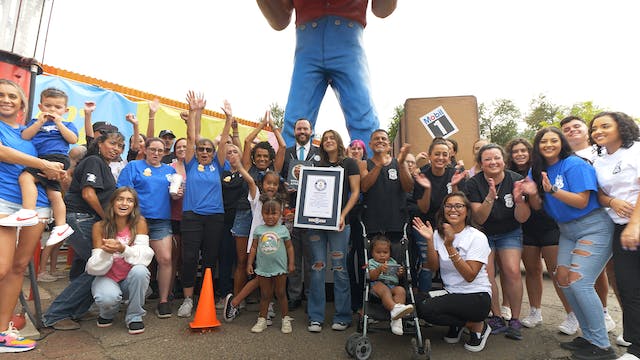 People asked Bryce Huschka what Mobil 1 – a motor oil – has to do with Route 66. His answer is… everything. “We are about to turn 50, but we are a baby compared to the Mother Road. For most of our existence, we have kept our heads down inventing – pushing boundaries of products that can go 20K miles between an oil change, saving fuel economy, and trying to help cars last even up to 1M miles,” he said.

Mobil 1 believes there is no better symbol of this ethos than Route 66, which led them to kicking off this effort to Keep Route 66 Kickin. They say they could have put their resources into a big TV ad, or they could do something with more meaning.

The next world record attempt will come at Clowndog Hot Dog Parlor in Albuquerque, New Mexico, with the most corndogs eaten in three minutes on October 1st. That will be followed by the world’s most dogs at a movie on October 15th at the Litchfield Skyview Drive-In in Litchfield, IL. While seemingly random, Mobil 1 notes that the records are not the point. More conversation about the small businesses that make Route 66 so magical is the point. In fact, there may even be some surprise detours or wayward driving along the way!

Similar to Hagerty’s mission, Mobil 1 says the campaign is designed to celebrate and support the love of driving – reminding drivers that the best route can be the scenic route. So, if you believe we need fewer cell phone pings and more Delgadillos in our lives, then show your support by going to keep66kickin.com as they push to help make Route 66 a National Historic Trail.

To show your support to designate Route 66 a National Historic Trail which will help preserve and promote the Mother Road and its small businesses for years to come:

“If you’re near Route 66, come visit! If you aren’t, explore keep66kickin.com to discover and show your support for the local businesses along the road. And no matter where you are, be sure to go find your own local overlooked route – a road where you can escape our overscheduled lives, turn on some music, and enjoy the drive.” Huschka said. 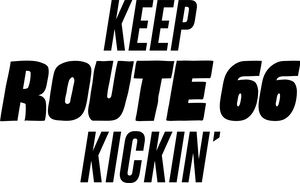 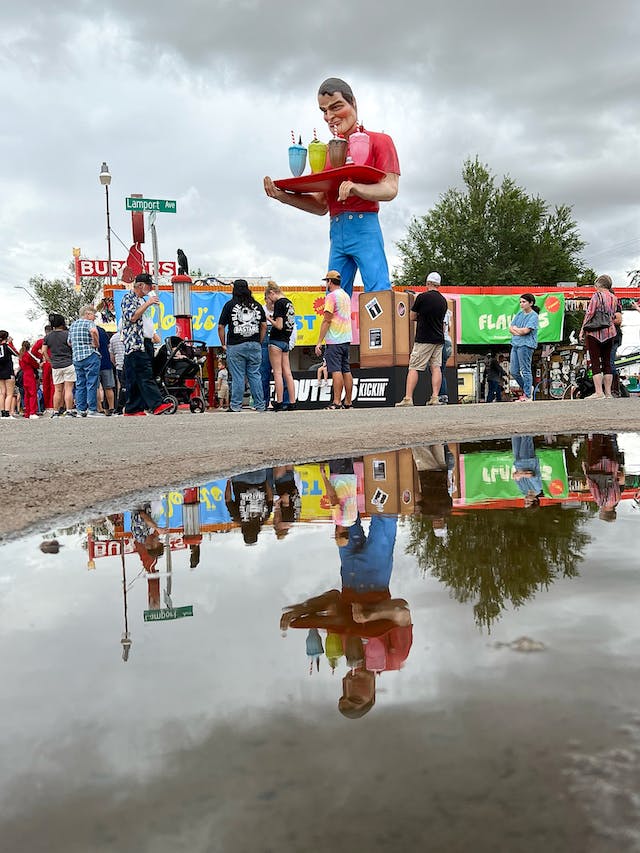 Get an insurance quote
A Story About
Share Leave comment
Read next Up next: Never Stop Driving #19: Mustang Stampede

Thanks to Mobil 1 for this effort. Keeping the Route 66 experience alive is a valuable piece of American driving history. 🤩

Let’s not forget the other end!!!! Fayette Ohio

I followed the link and tried to sign up to show support and receive updates and Mobile 1 website will not except an email address, no way to contact them about the problem.

I got it to work, might wanna try another browser on your computer.