Flea markets, family car photos, and the tragedy of the fire-scorched Lloyd Alexander

Lots of restaurants lately are touting farm-to-table dining. Flea markets are more my speed, because they’re a pipeline for heap-to-home. My home.

For one, I appreciate that such a venue eliminates the role of the middleman. It’s simply haggle, agree, and part ways. Not to mention that flea markets are an exceptional way to stumble upon arcane and bizarre car photos, old manuals, and neglected books without having to delay gratification with shipping.

I recently spent a weekend in Berlin, about a seven-hour drive from my home in the Stuttgart area. After leaving the rain-drenched book market at the Bode Museum nearly empty-handed, buying a couple of cameras at a popup near the train station, and finding a Daihatsu lapel pin at the decidedly hipster Mauerpark market in the Soviet quarter, we ventured into the suburbs of the West for one more open-air flea market. Something a lot more off the beaten path, with any luck.

The walk up to the market looked promising. There was a currywurst stand in close proximity to three men sitting around a bed of hot coals, each fellow with a tall beer in hand. One patiently hand-cranked a lamb on a spit. If there is a pagan god of bargains, he smiled upon this very scene.

I had only 20 Euro left, whatever remained after French fries and currywurst. The first stand I happened upon was an immediate goldmine: Old DDR Straßverkehr (translation: East German Street Traffic) magazines for only 50 cents! I snagged a few with the biggest promises on the covers, including a long-term test of the Zaporozhets 968. Reliability tips for your Wartburg? Yessir! And for a last-minute find, one Yugoslavian Zastava brochure for just 25 cents.

The next stand was more or less an attic gingerly lowered onto the ground floor. Not having much time left before the market closed, and my brain was programmed to exclusively scan for automotive shapes. Headlights! Wheels! Round steel figures! I wrapped my mitts around about 50 photos and unearthed them from the bottom of a decaying box. What surfaced was perhaps my best flea market haul of all time.

The car-centric photo album heavily features the Lloyd Alexander TS, the West-German-built Kleinwagen’s top trim. (Kleinwagen = minicar.) So basic was the 600-cc TS that the next trim level down, the 600, didn’t even have a trunk lid that opened. Though the sequence of events in the photos is a bit baffling, the development dates on the reverse side helped connect some dots. In the interest of telling this story, I’ve taken some narrative liberties and invented several characters to better present the complex relationship between man, car, and family:

December 23, 1965: Our cold open is a crashed Lloyd Alexander. Presumably, what follows is an uncomfortable evening around the dinner table. As the covering over the grille illustrates, conditions outside are cold. The tiny, sad, approximately seven-year-old vehicle would have been near the bottom of its depreciation curve, even before the crash. But Dad did love his Lloyds. 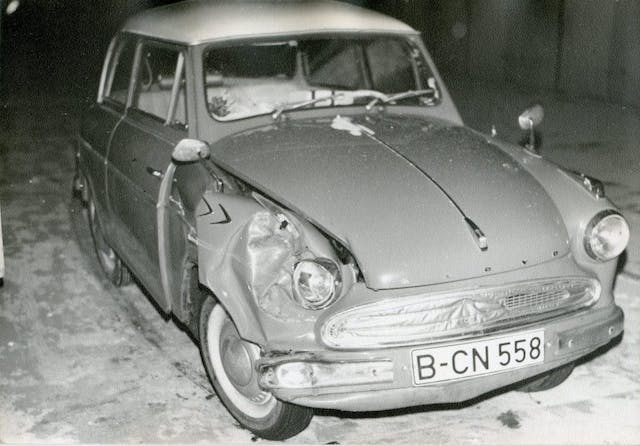 February 11, 1966: Shot a few weeks later, the Lloyd undergoes disassembly directly aside what appears to be a section of the Berlin Wall. Could Dad heave his scrap parts over there? Maybe the guard tower spotlight illuminated the work area as curse-fueled repairs extended past nightfall? In any case, the family Lloyd was heretofore minus a fender, and its tiny air-cooled twin engine was laid bare for Eastern surveillance.

May 30, 1966: Dear old Dad did a bang-up job beating it all back into shape before young son Johannes arrived home from boarding school. The other family Lloyd Alexander sits nearby, complete with panorama roof and Deutschland country marker. Back before people used these white oval stickers to inform other motorists that they had indeed been to the beach before, these indicators were used for cars that crossed borders throughout Europe. (Plates had not been standardized across nations and looked nearly identical.) Sandwiched between the Lloyds we see a now-valuable Agrati Garelli Capri moped. I don’t want to foreshadow too much, but the moped will outlive them both. The cars, I mean.

June 1, 1966: Showing a bit of rebellion by way of a hurtful gesture, Johannes parks the newly fixed Lloyd in the garden and chooses to ride the Capri throughout the summer.

August 2, 1966: Now broaching late summer, some other family members are depicted below performing untold tweaks to the Panorama Lloyd, and the atmosphere feels dire. The old household ride is now without a hood, and control cables hang over the side of the engine bay. This looks to me like a good ol’ German Sclachtfest (part-out party), albeit with oddly formal dress code. Cousin Maren gently tips the tiny motor forward while cousin Andreas unscrews the drain plug, returning the oil to the earth through vacant hole in the neighbor’s garden bed. Given family history and memories of that terribly awkward dinner, they will resolve to pull the already-damaged fenders.

April 15, 1967: The white Lloyd is still around, but for parts. Father has rolled it onto its side to steal the shocks and hub assemblies—just in case the kids ever learn to oversteer instead of crashing headlong into things. Clearly setting the family tone for working on Lloyds in nice clothes, Dad wrenches and grits his teeth in a smock, shiny shoes, and stylish glasses. “What are you lookin’ at? Hand me that wrench!”

May 25, 1969: It’s two years, two curb feelers, and two spring-loaded fender endpoint indicators later. Having a garage full of parts (including the fenders Maren and Andreas dismounted) and no more patience, Sandra is turned loose to do the exact same job Dad did for Johannes four years earlier. Johannes may have snubbed Dad by parking the Alexander behind the house and riding an Italian scooter instead. but at least he didn’t crash it. All Dad can do is sit in a lawn chair with his Rollei 35, bask in the lessons afoot, and shoot film.

December 19, 1970: The Lloyd is up on jack stands and tools are spread across the floor. Fairings from Johannes’ forever-ongoing Capri scooter project obscure easy access to the vehicle, not to mention all-important light. Dad gets enjoyment from working on the Lloyd, even if it means trying to epoxy a carelessly cracked sump and wire-brushing rust scale off salt-blasted fuel lines. That he’s doing it on his back and in the dark is irrelevant and totally par for the course.

December 19, 1971: Now once again without the useless fender markers and zero visible body damage, the Lloyd is ready for Sandra to drive back to grad school after Christmas. Dad admires the final product as the snow falls heavily. Snap! 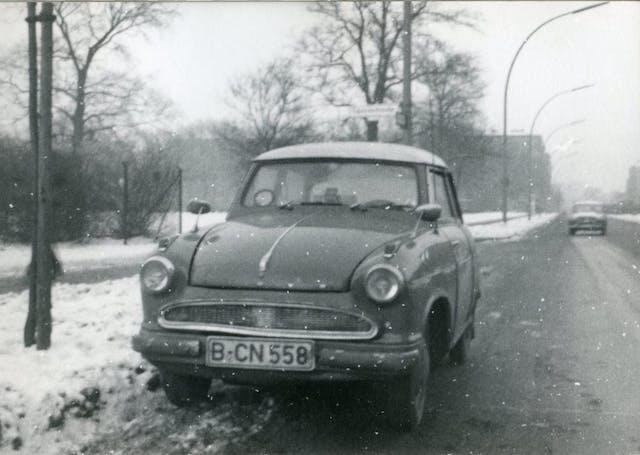 January 3, 1971: In the midst of a final systems check before Sandra sets off, the Lloyd dies halfway through a three-point turn. Before smoke warns of the inevitable, flames exit the gap between the hood and cowl. Escape is the only option.

As the cliché states: The best camera in the world is the one you have on you. And perhaps those years of professional war photography had paid dividends in times of peace. Amid a raging blaze, wherein the gas tank prepares to spray a mushroom cloud out of the filler neck, Dad acts. He doesn’t run as far and fast as possible, nor does he make any honest attempt to extinguish the self-sustaining exothermic reaction. He quickly checks his light meter, sighing as he documents the conflagration.

The final image of the Lloyd Alexander TS shows it behind the gate of a tow yard, Johannes on his scooter having just arrived to the scene. After a final look at the melted mirrors, bubbled glass, and melted battery, Dad saddles up on the back of the Capri for the icy, terrifying ride home. Johannes grabs handfuls of front brake at each interchange, creating brief moments of understeer and knee-jerk Heimlich grip from behind. Dad breathes a sigh of relief. There are no more kids at home, no more fenders in the garage, and strangely, no more Lloyds to put them on.